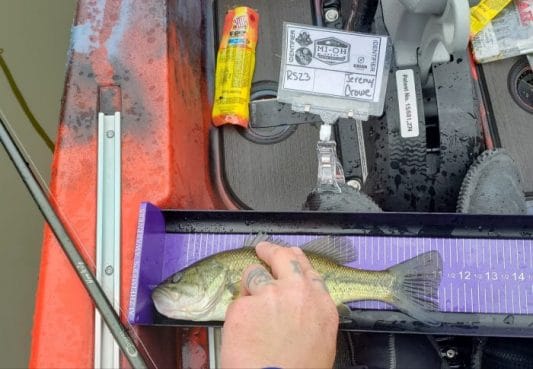 Earlier this spring I was invited to fish my first tournament of the year down in Ohio through the Mi-Oh tournament trail. It was originally set to be held on Kiser lake but was switched to Indian lake. We camped with a few friends on the lake for a couple days to prefish and ended up sharing the campground with a ton of anglers and fellow JK teammates. Always love meeting new friends and getting to see the ones I’ve met along the way. This is where the good stuff ends….. Ohio had plans of rain and serious wind not only for prefishing times but also the tournament itself. Especially the ridiculous storm that rolled through the morning of. We decided to wait it out and get on the water about an hour late. 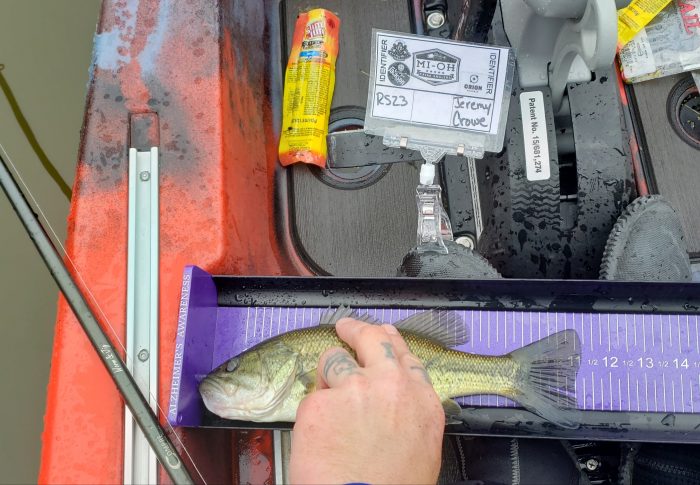 Back to prefishing in the cold rain, it was April 20th in upper Ohio. We went out the two days prior without much luck other than figuring out where we wanted to go for the event. There were not many fish caught and nothing to brag about. With the 100% chance of thunderstorms and 40+ mph gusts in the forecast we new it was going to be rough. We also knew there were some heavy hitters that signed up to brawl.

As I said before we got out about an hour late, strike one. Water temps were easily 10 degrees cooler than the day before, strike two. Getting rained on, wet, miserable and only catching one fish by about 11, strike threeish. That’s when I stumbled across a deeper pocket of water that had about 75 feet of rip rap, a boat hoist, then 25 feet of sea wall. First cast at the leading edge of the seawall was my second bite and scoreable fish. Back side of the rip rap provided another big bite that turned out to be my PB sauger unfortunately. I don’t look at the leaderboards while in tournaments. It gets in my head and I start fishing super silly.

What happened next changed my day. I took a break, seriously thinking about throwing in the towel. Hands numb, brim of my hat soaked to my forehead, 2 scoreable fish. Grabbed a snack, grabbed a drink. Just sat there when my phone goes off. I open it up and It was messages from a few friends. Some of which said to grind it out, others were telling me I just dropped from 4th to 5th and I better get hustling. Those messages were the push I needed to get the line back in the water.

I got back to working that section, it produced three more fish for me over the next few hours. Provided a limit from the support from some good guys. I also caught a nice catfish which landed me an Indian lake slam. I was able to secure a 4th place finish, land in the money, and secure a spot to the KBF national championships on Guntersville.

Rough very Tough day both physically and mentally. But at the end of the day, standing there shivering and freezing at the check in and awards ceremony I realized again why I do this. I was surrounded by friends. Some I was meeting in person for the first time, some I’ve known for years. It’s not about money or fame for me, its’s about friends, sharing experiences, and having a common passion.

P.S. Thank you for the support guys, you all know who you are.