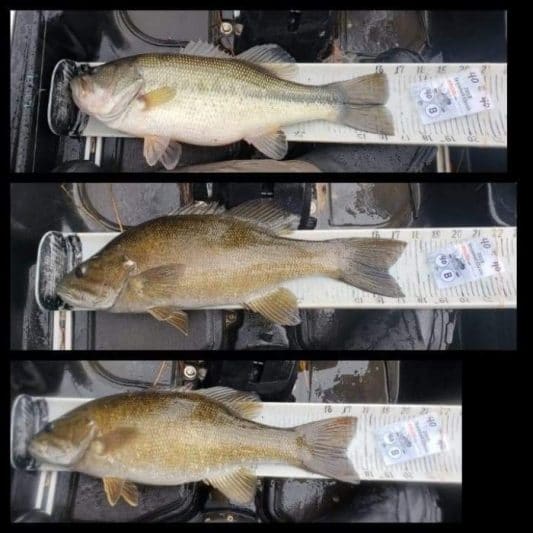 Dale Hollow…for bass fishermen, this is hallowed grounds. Home of the world record small mouth and five of the top ten small mouth bass ever caught. It’s a bucket list destination for many and I consider myself lucky to live only four hours away from this legendary lake. 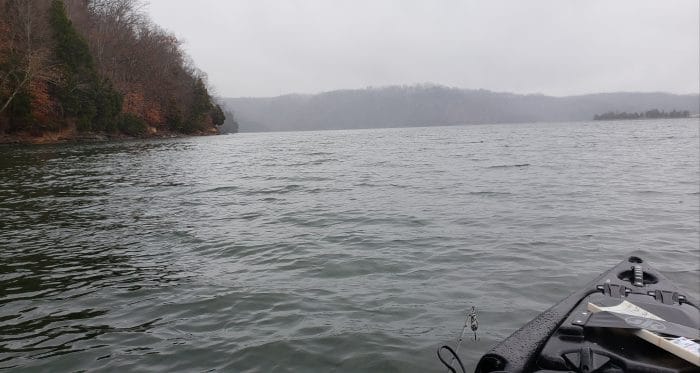 In early fall I saw on Facebook that Bluegrass Kayak Anglers were holding a kayak bass tournament on Dale Hollow in mid December, the “Snowball Classic”. I knew December was prime time for bass fishing on Dale Hollow so I put in for vacation and started my necessary preparations. By the first of December I had my campsite booked, my tackle sorted and chosen and was sitting on ready.

I knew that this event would be a good one because A.J. McWhorter and Jay Wallen of Bluegrass Kayak Anglers did things right. I had fished a winter event a couple years ago on Barren River Lake with them and despite the extreme cold and formidable conditions, the whole field of forty plus anglers seemed to have a great time. Without a doubt I knew the Snowball Classic would be as good or better than that! 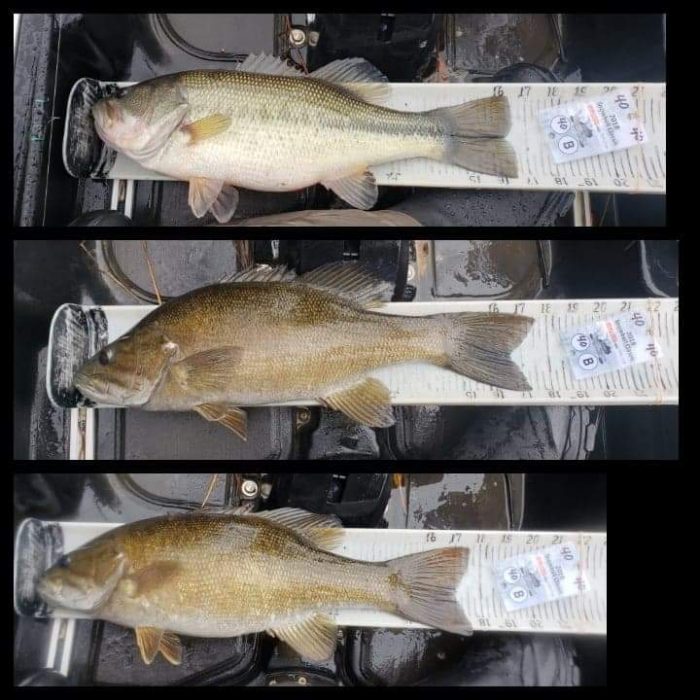 I had looked at virtually every inch of the lake on my Navionics app, read every single article and fishing report that mentioned fishing Dale Hollow during winter so, everything I could possibly do not on the lake had been done.

On the drive up I planned the areas I would fish during my two days of practice. There are two main rivers that feed Dale Hollow, the Wolf River and the Obey. I would fish both then if needed I’d look at a section on the main lake where it narrows down. 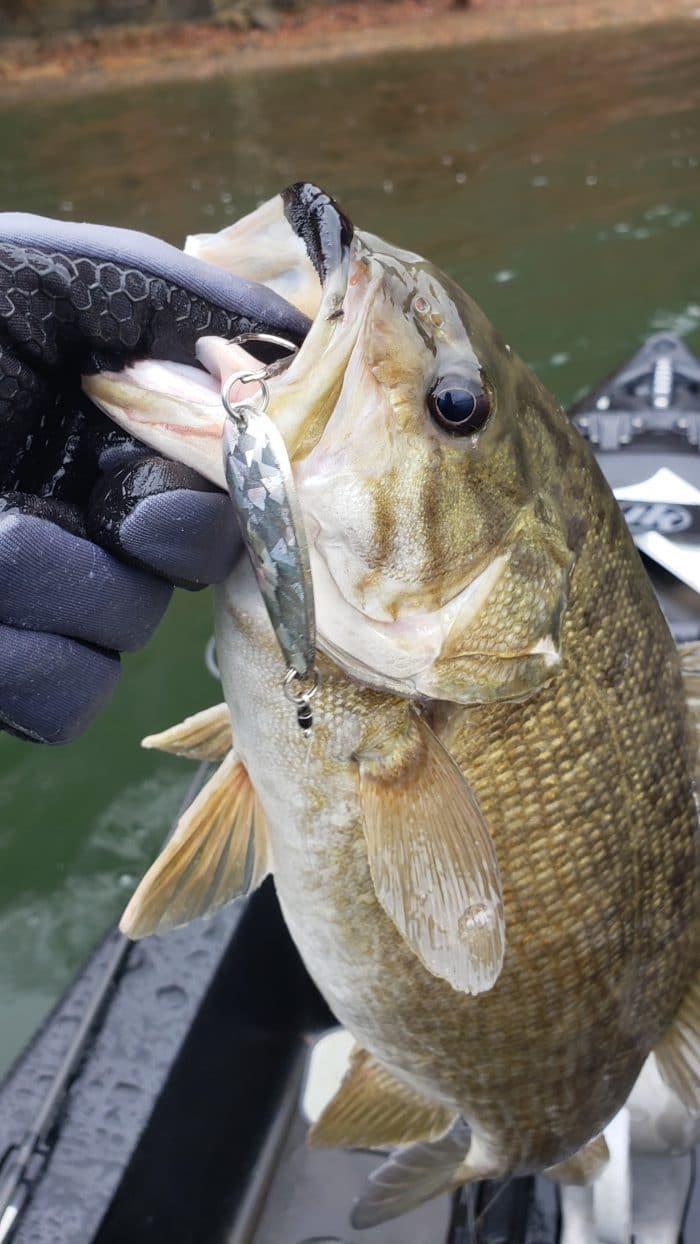 The rivers didn’t pan out for me. I caught a few small fish but definitely nothing that would get me excited so on tournament morning I would launch at the state park ramp with only the confidence that my practice spots were not good and I had heard the area around the state park could be. I was skeptical but hopeful.

At launch time it was thirty degrees, snowing and a stiff north wind was on us. As crazy as it may sound, I love fishing in those types of conditions so I optimistically headed out into the wind and snow in my Jackson Coosa FD to scan a few areas with my depthfinder. I fished some as I went but I mainly watched the screen on my fish finder and at around nine in the morning I marked what looked like fish in forty foot of water directly under a dock. I dropped a small Dixie Jet spoon down to the bottom and in no time I had a fish on. I slowly fought it to the surface and was happy to see a healthy sixteen and a half inch largemouth bass. I probably stayed there for two hours tossing that spoon with no luck. I knew I had to make something happen so I drifted with the wind across a deep flat scanning with my electronics and dropping my spoon down to what looked like fish but still no bites. I was feeling the weather, the pressure and running out of options. 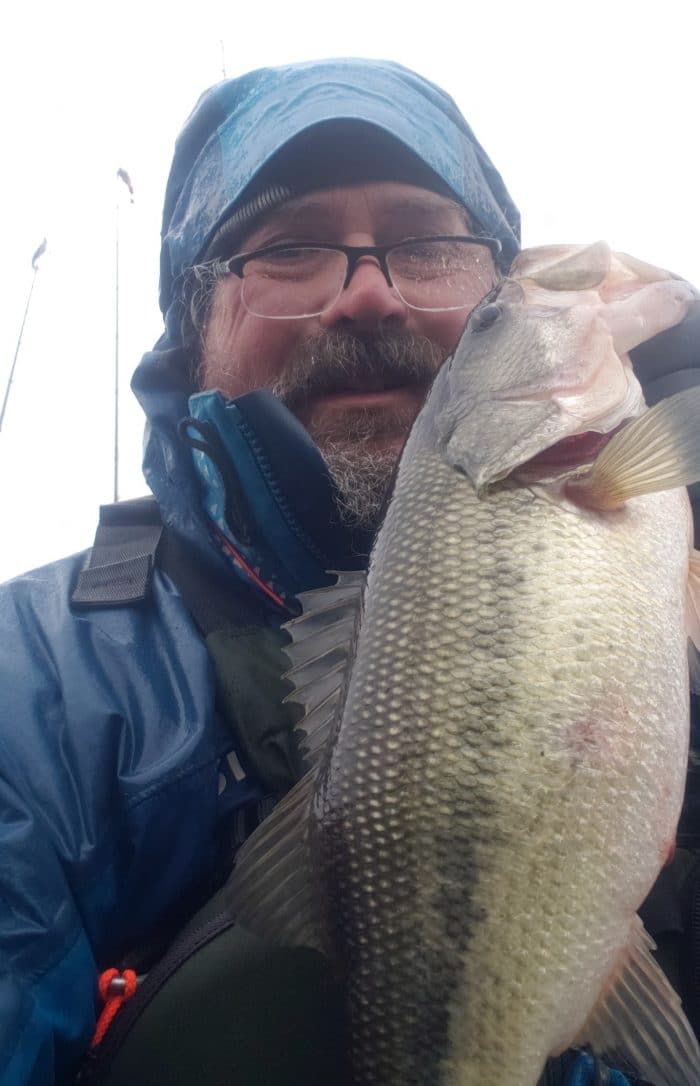 I crossed over the river channel to a steep bank with the intention of cruising down it in hopes of finding something that looked fishy. As I eased down the bank I noticed an area that was different from everything I had passed. It was small pocket that had a beach area at the waters edge. The water depth went from fifty feet to fifteen feet in just a short span of shoreline. This was a submerged hump and there was deep grass on it. On my first pass I noticed what looked to be fish at thirty feet so I backed off the spot and made a cast. I probably worked that spoon only about fifteen feet and had a bite. This time I landed what you come to Dale Hollow for, it was a healthy seventeen and a half inch smallmouth bass.

I hadn’t looked at the online scoreboard provided by tourneyX.com but I received a couple of texts shortly after I had submitted my second fish. A short time later I hooked and landed another seventeen and a half inch smallmouth bass. When I pulled out my phone to submit my third fish and fulfill my limit I saw that my wife and a good friend had both texted me. Their texts were encouraging messages telling me that it looked like the entire field was having a slow day and that a third fish of similar size would go a long way. I responded….I got her with a picture of my third and final fish of the day. That fish put me into first place but I knew that the chance was slim that I’d hold it to the end. I fished my tail off in an attempt to cull any or all of my three fish limit but those three fish were as good as it was going to get. 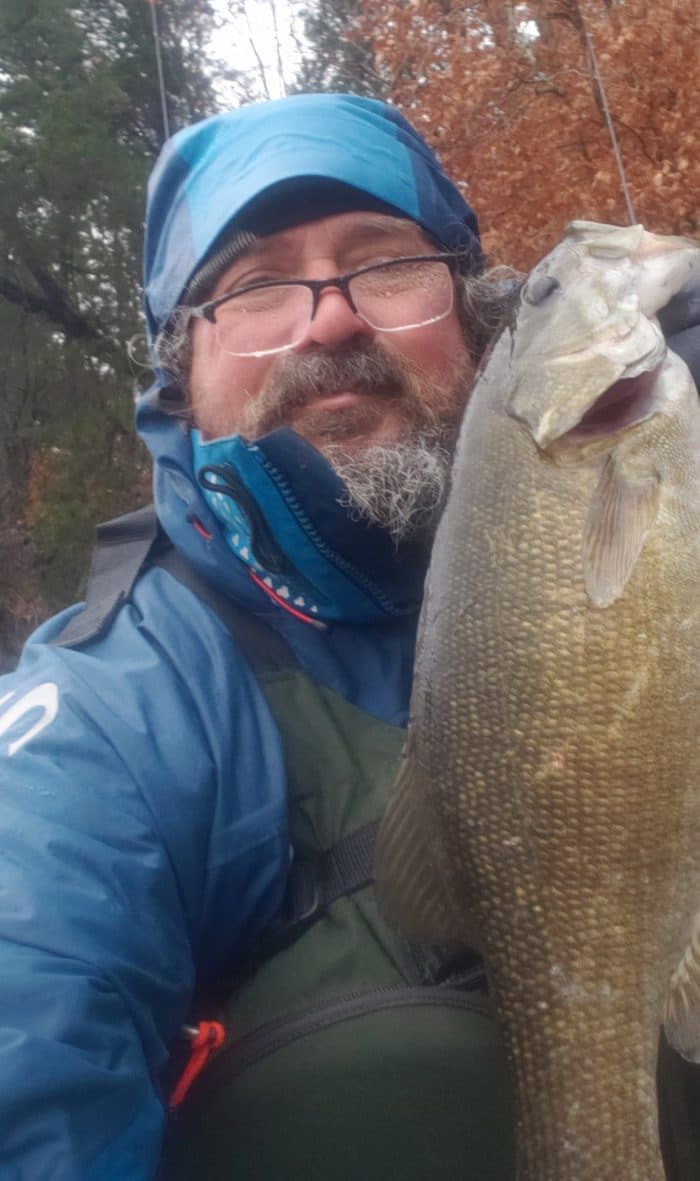 As I headed back to the ramp I felt good, I had fished almost flawlessly in extremely tough conditions against a field of top notch anglers on what is now one of my favorite lakes. I loaded up and headed to the weigh in with a smile on my face.

My Jackson Coosa FD was instrumental in me being able to catch fish that day. She allowed me to cover a ton of water during practice and made fishing in the wind much more tolerable. I could face the wind and essentially tread water by slowly pedaling to maintain my position. The flex drive makes me a more efficient fisherman and helps me to keep a lure in the water longer. If I would have been paddling I would have had to find a sheltered cove and hoped it had fish. 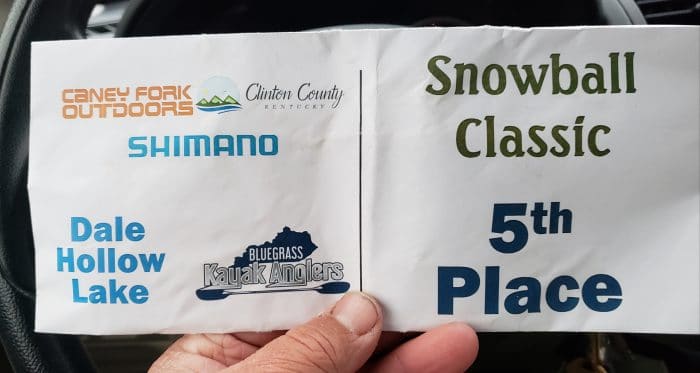 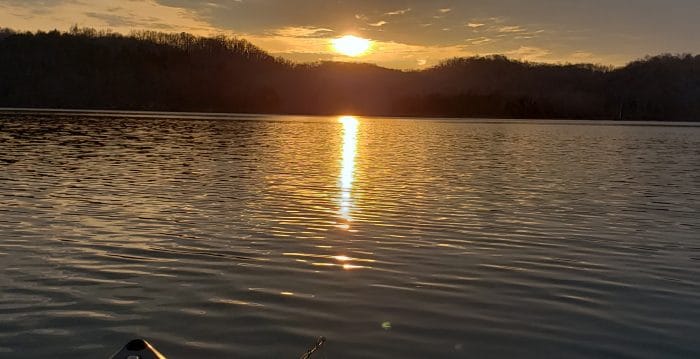 Back at weigh in and when the scores were totaled I was thrilled to have finished fifth out of forty five anglers. I had the pleasure of getting to put faces with names and talk fishing with several guys I’d never met. This sport is growing so fast and the amount of topnotch anglers is very motivating. I hope that next year there is another Snowball Classic because I will definitely make sure point to be there.

Read more from Jim at www.rivergoat.blogspot.com