Kilroy Redfish on the Fly 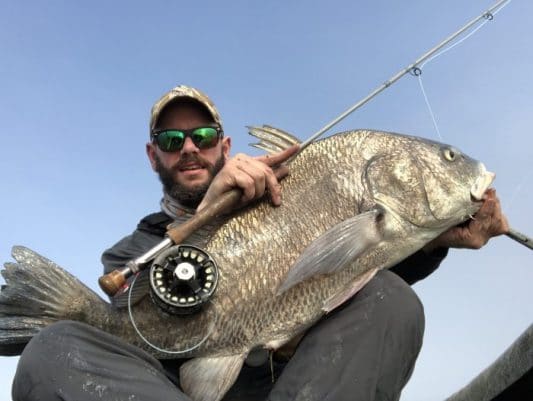 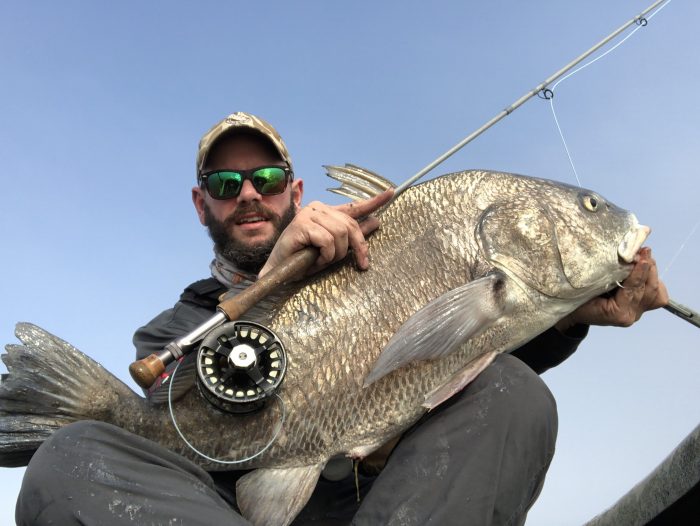 My newfound ritual of inshore fly fishing from the kayak in Grand Isle, Louisiana rolled around and I spent several furious days tying up flies, lining up rods and tying leaders. I packed my usual fly rods and boxes along with a backup of spinning gear and lures in case of high winds. My last trip to GI was met with extremely high winds and only a couple of small windows of sunshine and prime sight fishing conditions. This trip did not suffer from high winds, but it offered up entirely new challenges in the form of fog, rain and poor visibility for sight fishing. Despite those challenges, I was more than up to the challenge of brawling with marsh-living reds on the fly rod! 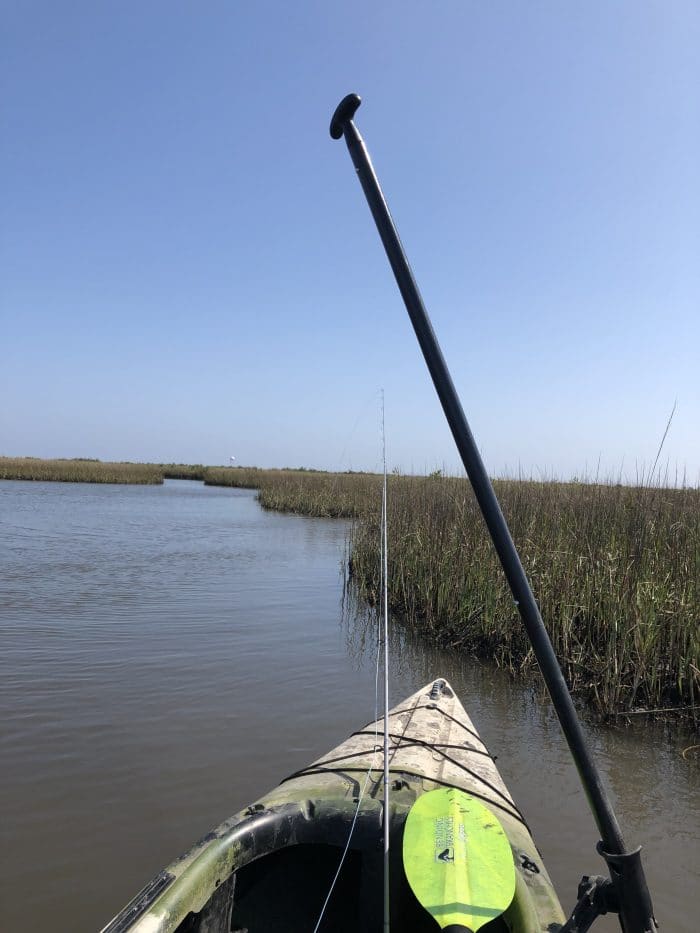 The weather conditions left me fishing under a dense fog and heavy, low hanging clouds. This produced an unbelievable glare on the water’s surface that made sight fishing nigh impossible. Sight fishing for winter red fish in Grad Isle usually has you looking for fish cruising off oyster beds in slightly deeper water than in other times of the year, so you rarely get the benefit of spying a blue tail sticking out of the water or the wake of a bronze back sending grass shrimp fleeing for the hills. The sunlight reflecting off the looming cloud cover and thick-hanging fog created a perfect storm of glare that handicapped your visibility to no more than a few feet off the bow of the boat. If you have done any sight casting, then you will know that is an untenable situation as you will spook the fish long before you ever see them. 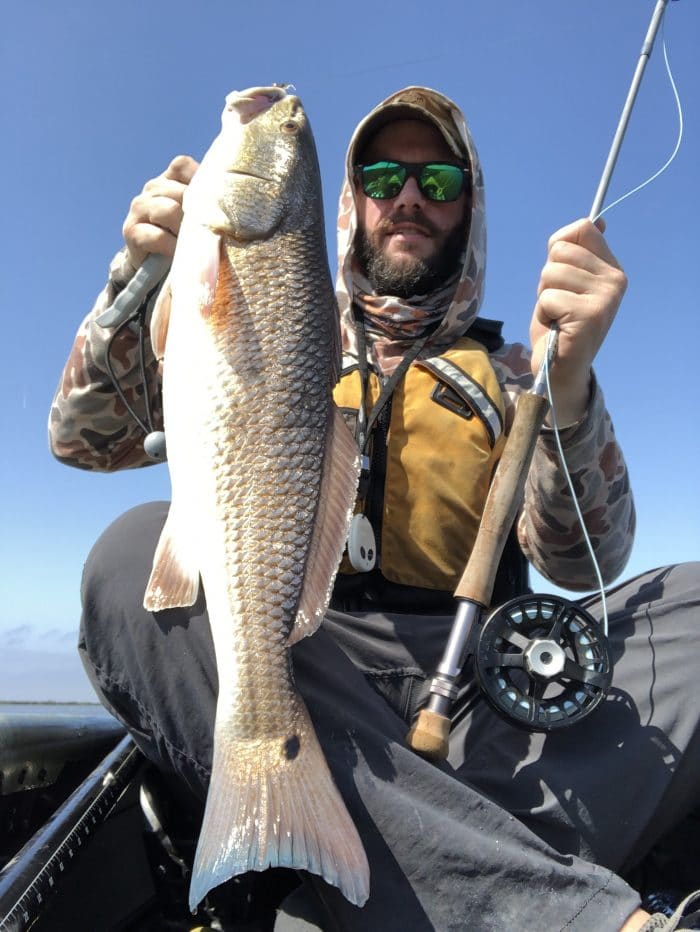 With these awful conditions, I knew that I would have only a few windows of bright sun and low wind that would allow me to sight fish for reds like I love to do. So, I anchored up through driving rain, sought shelter in mangroves from high winds, and stared hopelessly into stained water until I had two, solid windows of sunshine and opportunity.
I began working an oyster bed edge with my 8wt and a flashy, copper fly. The wind made it very difficult to control the boat, even with a push pole, so I allowed my boat to drift with the breeze across and open flat that dead ended into mangrove and oyster beds. I scanned the oyster beds quickly, knowing that I would have only a split second to shoot a line over to a feeding fish. Suddenly, I spied the blue tail and bronze back of a stud, upper slot red. He was facing the opposite direction, so I gambled and hit the button on my power pole remote to drop anchor instead of trying a quick cast. My Kilroy ground to a halt in the silt, parked less than 15 feet away. I flipped an overhand cast with my Lamson 8wt and dropped the fly right in his path. That fish pounced on it like a cat on a wounded mouse and I strip-set into a 29” redfish; my personal best on the fly. 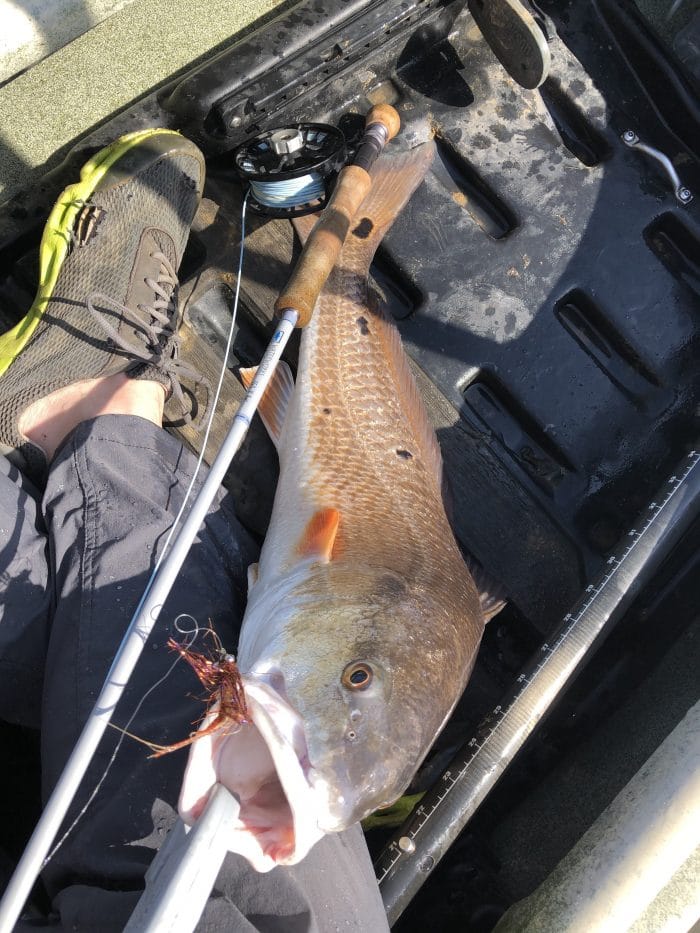 That window closed with high winds moving in and didn’t settle until the sun had touched the horizon. As evening approached, huge black drum invaded the flat I was working. After spooking the first two, I found a behemoth drum cruising an oyster bed and I put a fly in front of him. Black drum don’t typically pounce on a fly like their red cousins do. You have to toy with them almost like a cat and mouse game. Keep the fly moving so they can track it, but don’t move it too quickly or they will lose interest. I finally enticed the drum into taking the fly and strip set into one of the largest fish I have ever hooked on a fly rod. I dropped anchor and cranked down my drag, but the beast was having none of it. It quickly ran into my backing and I was forced to pull anchor and give chase into the outlying bay. An “Old Man and the Sea” type battle ensued and I fought the fish for over an hour. Finally, with darkness approaching, I decided to snap the leader and make my way back home before getting stuck in the mangroves after dark. 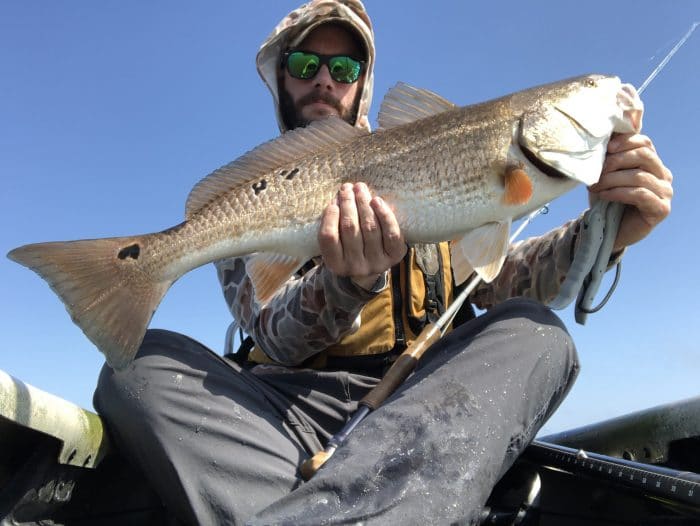 My final day of fishing dawned with heavy rains and zero visibility. I opted to paddle out into the marsh and anchor up under some overhanging mangrove so I could wait out the storm. After the storm rumbled out, I was greeted with unfamiliar sunshine and the chance at some sight-fishing. My go-to flats were now stained instead of clear, thanks to thunderstorms, but at least I had some sunlight to help pinpoint a back, tail, or flash of a feeding fish. I poled my way along a grass and oyster bed edge that typically held fish, scanning for any sign of movement in the water. A rare patch of crystal-clear water offered me a spectacular view of an upper slot sized redfish harassing mud minnows and grass shrimp. I locked my boat down, picked up my fly rod and watched as the fish lazily made his way towards my boat. When the red was within 20 feet, I dropped a fly near his side and he turned on it and ate it. The fight was on and I landed my second big redfish of the trip. 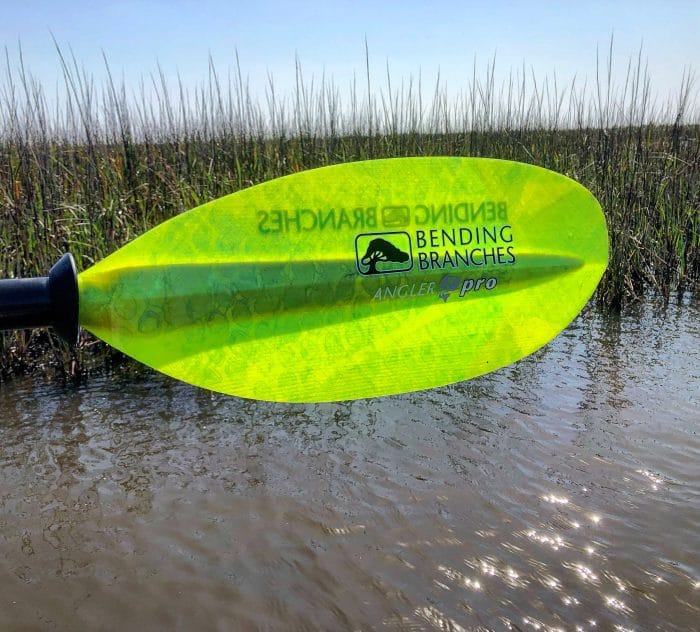 With another storm front rumbling in on the horizon, I made my way back to my favorite flat. On the same oyster bed where I landed my personal best redfish on the fly, I spied the huge, gray back of a black drum. I anchored down, picked up my fly rod and dropped a fly in his path. After battling with the leviathan the day before, I was fully prepared to work my drag to it’s maximum and land this fish. I cranked the drag down and held this fish to only a 10 minute battle. Black drum are smelly and slimy and not people friendly, but I was not going to let this fish go without a round of photos. I snapped some great shots of my largest fish on the fly and returned her to the marsh. 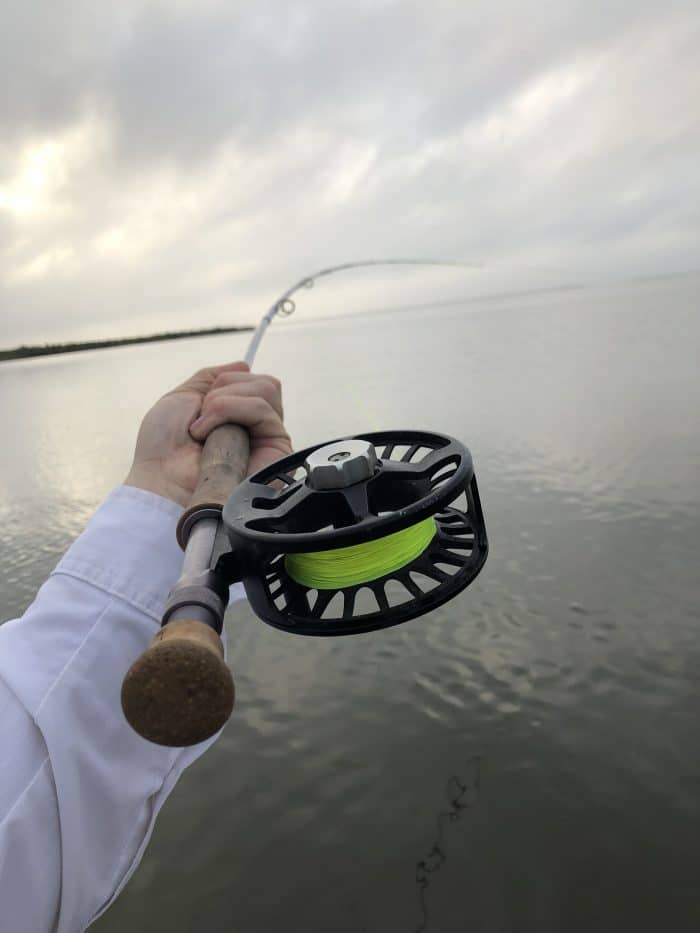 This trip to the marshes, statistically speaking, was my least productive ever, but you can’t measure the enjoyment of a fishing trip by the number of fish brought to hand. I landed my largest redfish and black drum on a fly I created and had an amazing battle with “the one that got away.” Most of my enjoyment comes simply from being in the marshes amongst the dolphins, owls, hawks, otters and flamingos and appreciating all that nature has to offer. Until next time!