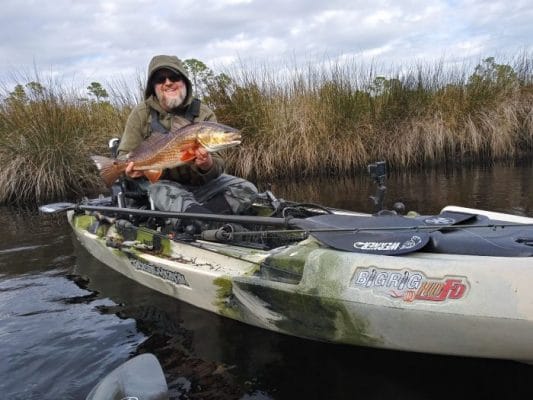 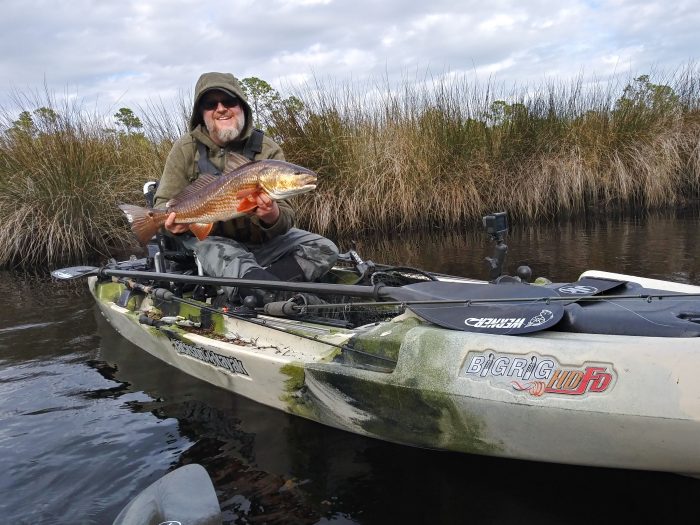 Generally when we think of people running south for the winter, it’s our neighbors in the far north. This winter had a blistering cold front that consumed most of the northeast and pushed bitter weather all the way into the southeastern states. 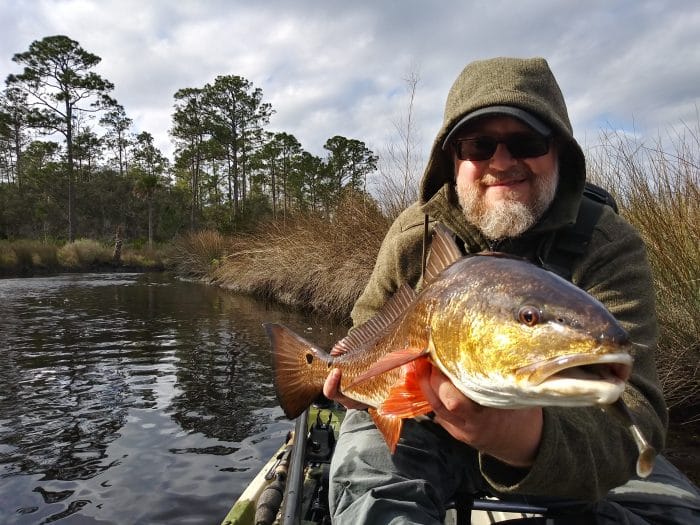 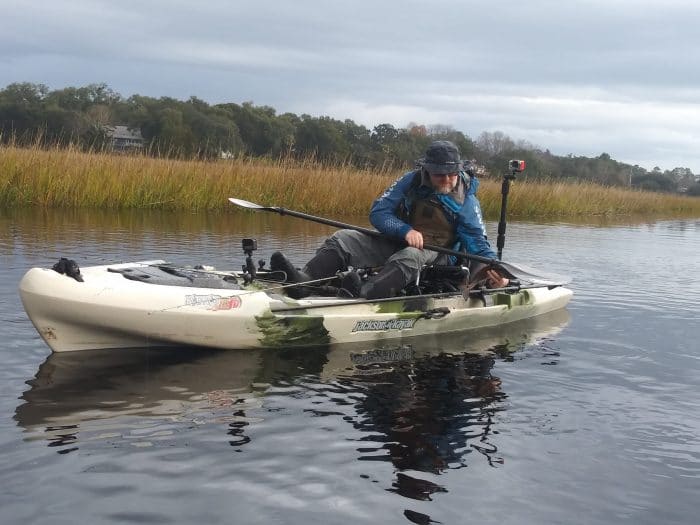 A good friend and fellow JK teammate Matt Cunningham, who was sitting a seventeen degree Tennessee, saw a great chase to escape the brutal temperatures and visit me in St. Augustine Florida for some fishing. Oh yeah!! He had a brand new Big Rig HD/FD he just picked up and I had just picked up a Kraken 13.5. So the stage was set for a fun time.
On the night Matt arrived the temps were in the mid thirties so he may have made it three states south but the weather was chasing him. We had a below forty temperatures in the morning with 20mph winds. Definitely not ideal. I had an area to put the slip on the wind and had been sticking a few upper slot (25-27 inch) redfish with clients earlier in the week.  Of course that was before the whole artic had moved to the south. 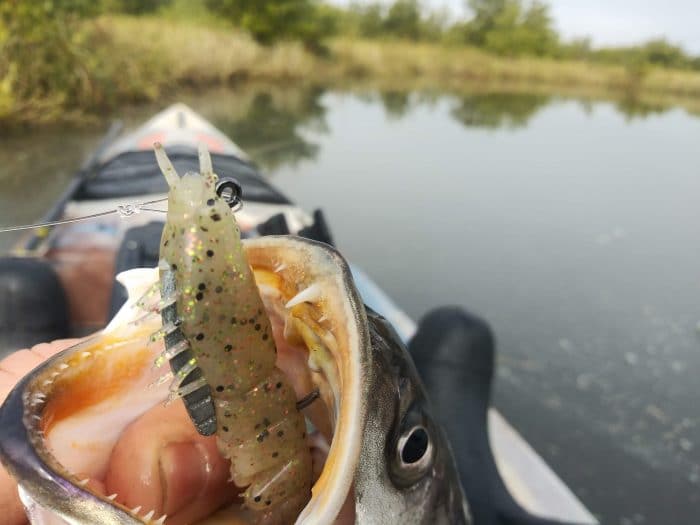 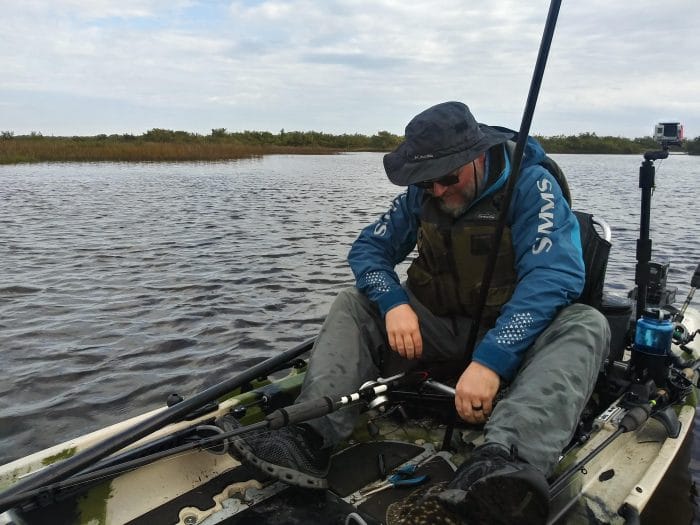 As we launched I noticed we are both are fishing the polor opposite JK fishing kayaks. I’m in a slim 30.5in Kraken13 and Matt is rocking a full 40in BigRig. I think he’s using a Werner 250cm and I picked my Werner Adjustable for the weekend. Knowing we would be covering a lot on miles searching the estuaries for redfish I’ll admit i was a little worried for Matt. 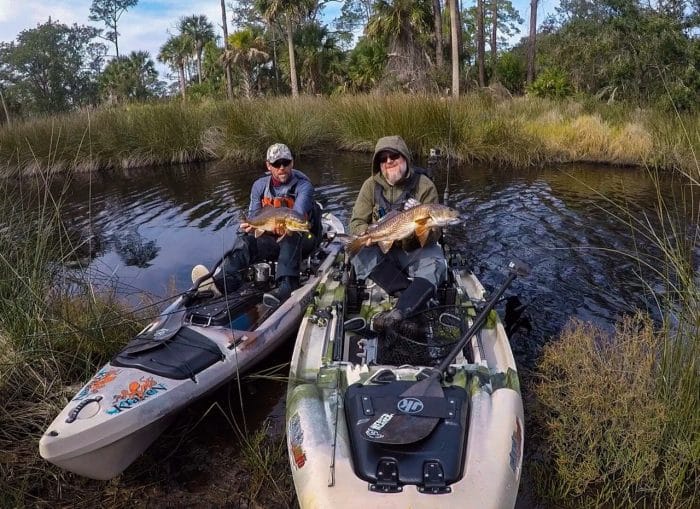 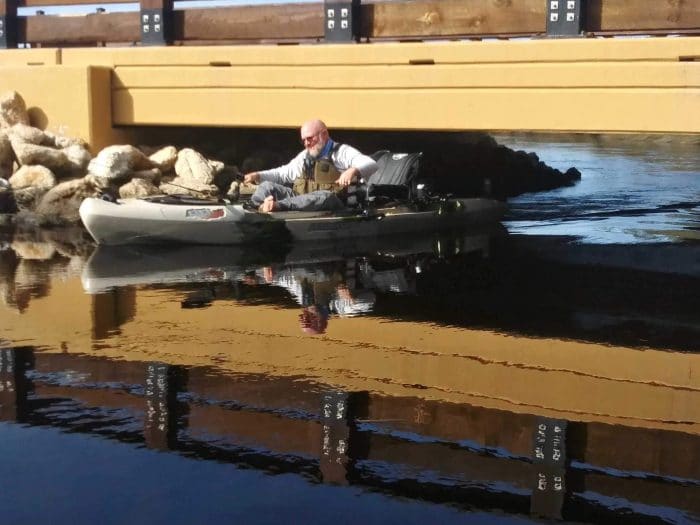 It’s was about a mile paddle to tbe protection of the woods so we could begin fishing. Surprisingly Matt was able to make decent time. Yes i was paddling with a little more ease in the Kraken but he wasn’t far behind. My fears of the fish having a case of lock-jaw ended within minutes of lines hitting the water. Double hookups!! What a great way to start, evenvincless than desirable conditions. As the day progressed we made it though some super small areas and found good fish. While I prefer a small kayak usually, it was impressive to see Matt walking around his yak all day. Plus he squeezed through some areas i thought for sure he was going to have to back track. 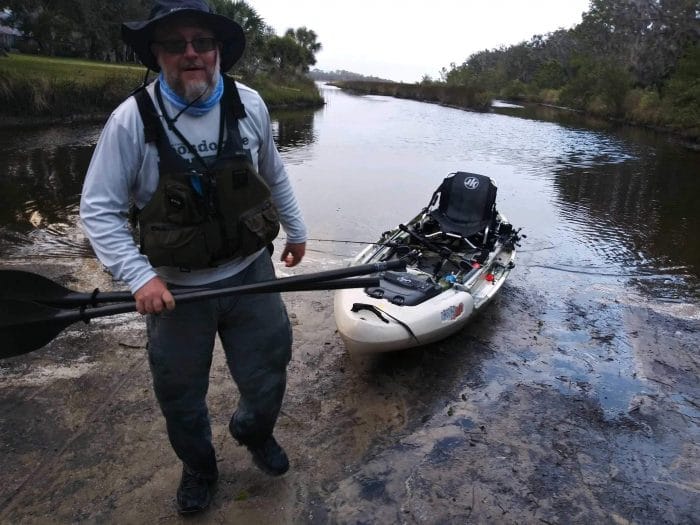 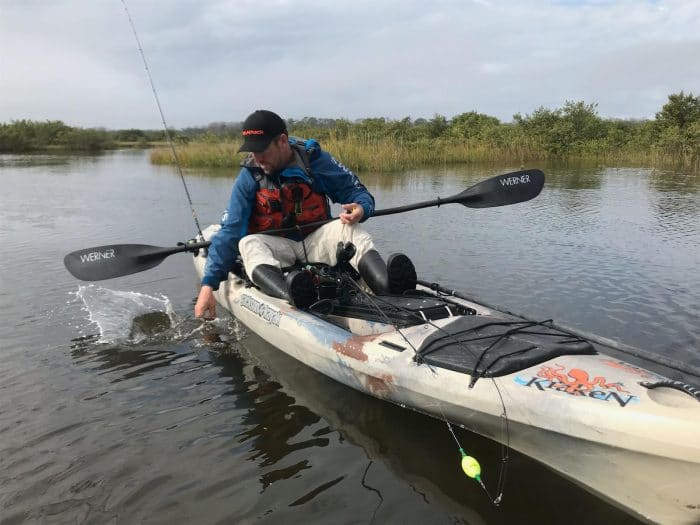 Day two Artic Vortex Vacation was a bust. As a guide I’m always needing to check new and old spots to see were else things might be good around town. At six hours into fishing a day that was less windy and15 degrees warmer than the previous day, with one little under slot redfish, that Matt tricked. We decided to move on to steamed oysters and cold Coronas. 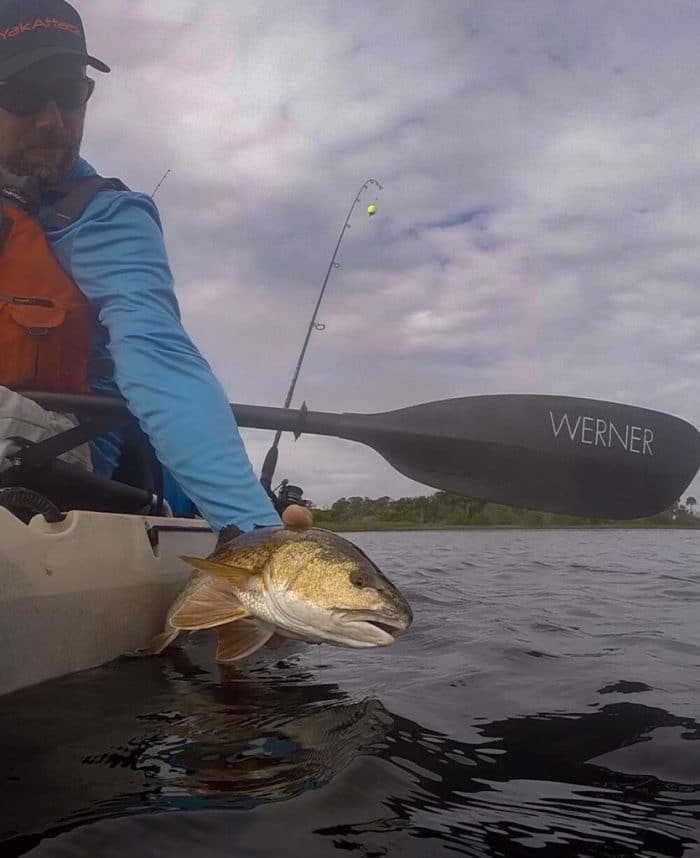 Day 3 Artic Vortex Vacation Epic Last ay
The Big Rig had kept up and Matt had put a few more fish than me on deck, so it was time to relax a enjoy the day. I didn’t want to see another scout trip go in the(dont go back 4 awhile) scenario,  so we headed out to some recently proven flats along south St. Augustine. We started the morning off with a few slot sized spotted sea trout and then things died off. I was like (NOOO!! not on Matt’s last day in Florida.) I knew the tide was perfect for an area about a two mile paddle away I wasn’t even sure if i should even ask Matt after all the distance we had covered in the previous two days.  I presented it like i do to clients. Kinda make it easy to say no and add an ultimatum. Without hesitation Matt let me know he still had plenty of paddling in him. We had a lunch and started the track. On our way over we passed a hole i hate to paddle past. First cast in Matt stuck a nice Flounder and I wasn’t far behind with one for myself. All we needed was our redfish for a Northeast Florida inshore slam. So we paddled the two miles as quickly as we could to catch the tide right. Once there Matt headed into the spot I’d been doing best in and i skirted the outside banks. Fun thing I get a call from Matt asking where I was paddling to.  I was on a Redfish/Kraken sleigh ride!! No paddling needed!  We popped a few pics and released my needed (slam) fish. Now we needed one more to bring Matt’s slam before the on coming dusk. In the last hour we both brought our redfish catches into the double digits. 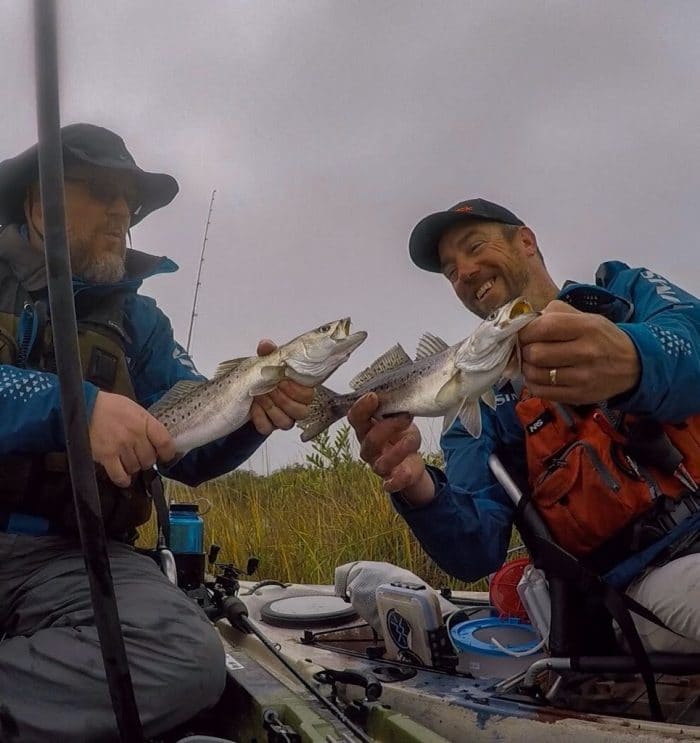 As a North Florida resident I generally head to the Everglades to dodge the cold. It was nice to helpout another southerner to put the slip on what’s looking like the cold front of the year. Good friends,good times, good fish and super fun kayaks to help us enjoy the experience.
Polar Vortex didn’t stop us from putting together some magic!
Here’s to warmer days for us all!!!
Bart Swab
Www.actionkayakadventures.com
9043250344