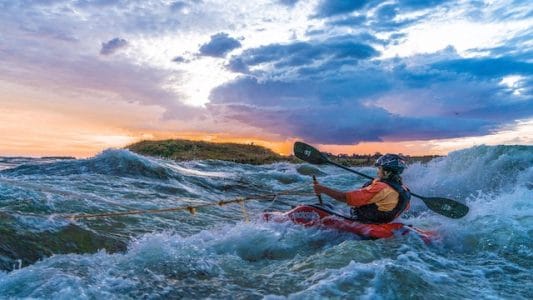 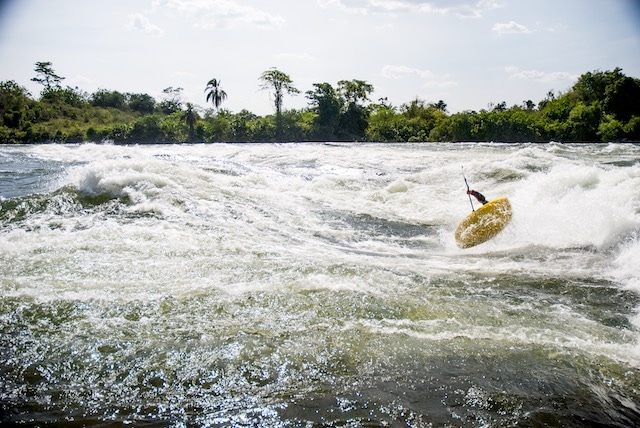 It has taken a few months to organize my thoughts, to transcribe my feelings in a way that make sense, but this is a story I feel I must tell. This community, this river played a major role in my development as a kayaker and as a person, and I owe it to the legends that will rise in regards to Nile Special to keep my memories fresh, to reminisce the good times and to preserve the feeling inside us all that was Nile Special. 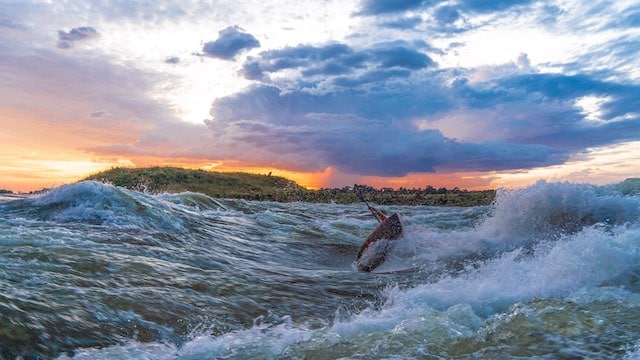 In the Winter of 2011, I was privileged to experience the day 1 section of the White Nile in its final days of freedom leading up to the completion of the Silverback (Bujagali) Hydroelectric dam.  Enjoying what the river had to offer with a thriving scene of locals on the banks of Bujagali Falls, exploring the back channels, rolling the dice in 50/50 and coming down the ramp at Silverback ready to face colossal and chaotic waves.  These memories are all I, and many others have left of one of the best sections of white-water the World had ever seen. 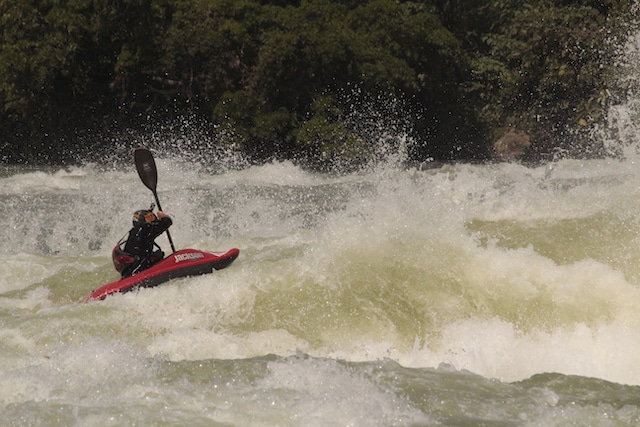 Maybe it was the short amount of time I shared with these rapids, the remarkable kayaking that still existed downstream, or the fact that I was 16 and numb to what losing something forever meant,; but I did not mourn the day 1 section as I should have, I did not fully comprehend what was being lost. 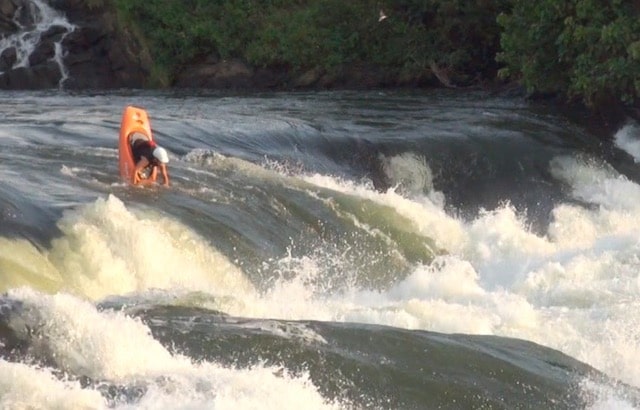 Fast forward to the Spring of 2015, I was nearing the end of a 5 month stay on the Hairy Lemon Island as the Freestyle World Championships approached later in the summer on my home river.  This lengthy excursion marked my 3rd voyage to paradise, and when I think back, this is where the roots of my deep connection with this river are planted.  Living off the Hairy Lemon, training twice a day, extremely focused on constant improvement for the upcoming Worlds.  The river was teaching me as much as I could absorb, luring me out and pushing me to my limits.  These daily Nile Special sessions allowed me to grow, to push myself and to reach levels in my kayaking I never thought possible.  As good as the river was day in and day out, the atmosphere around the river is where the happiness of these memories rest.  Friends and competitors from around the World were all on the same program, shredding on the river and chilling on the island, good vibes were engrained into our everyday lifestyle. 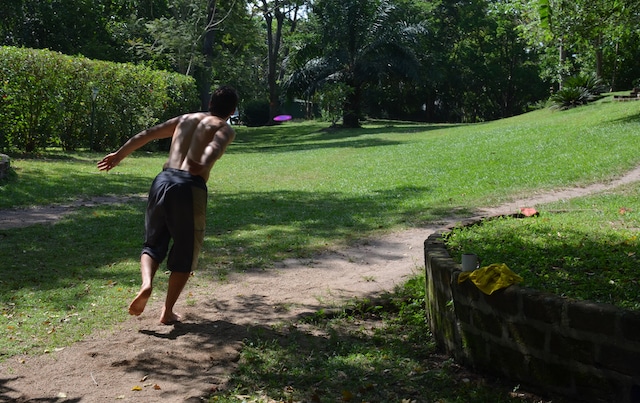 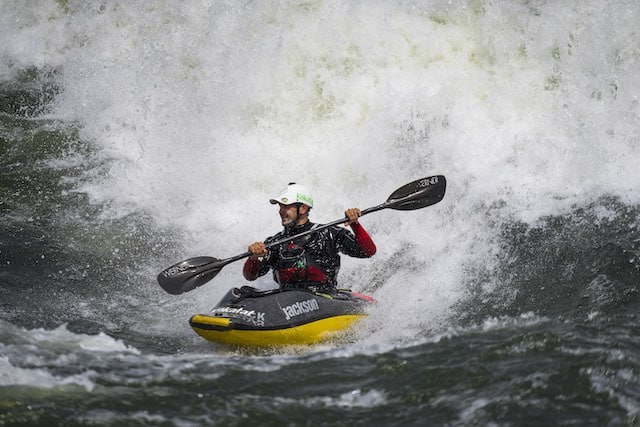 Earlier on this trip, I broke my wrist.  Not being able to kayak for upwards of a month, having to take it easy when I got back at it, those weren’t the reasons I was there.  But again the river showed me the way and taught me a lesson I needed to learn.  There was more to Uganda than the White Nile.  This injury forced me to take a step back and to look around, to experience the joyous people that call this country home, to visit animals that are fighting extinction as their habitats are degraded at an exponential rate, to enjoy the landscapes and to imagine how they looked before humans took command.  I went down to the southern corner to experience one of the few remaining tribes of wild Gorilla’s, to the west and the slopes of Mt. Elgon for the World’s best arabica coffee, and to the northern regions for the wonder and beauty of Murchison Falls National Park.  The connection I had with the river, had now expanded to the whole country.  It was near the end of this 5 month journey that the rumours started to fly that the Isimba hydroelectric project was actually going to come to fruition, from here on, I knew I couldn’t pass on any opportunity that would bring me to this area again. 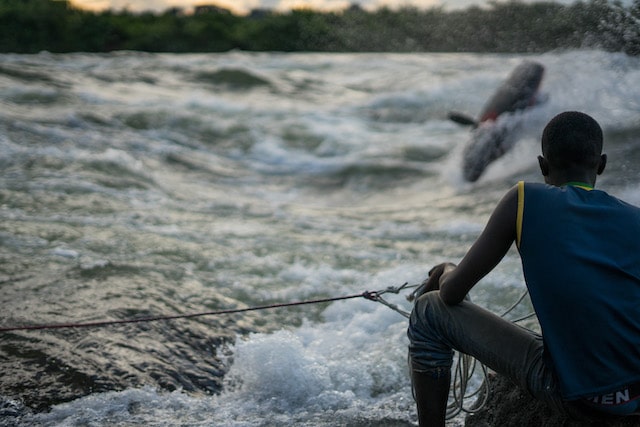 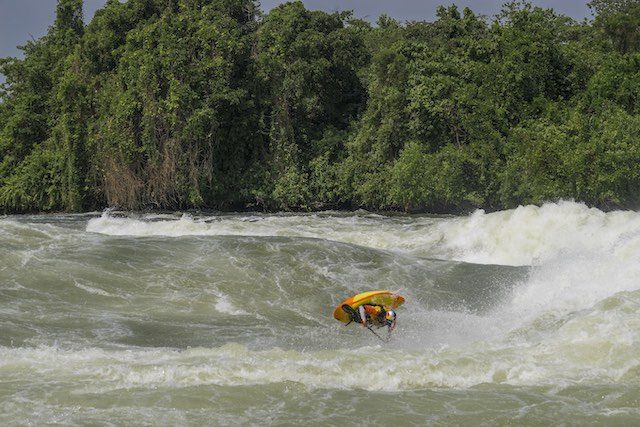 This mindset induced my return in the winter of 2016 for a quick mission.  And then a dream came true with World Class Academy in the fall of 2017.   An opportunity to combine my passion for teaching and to share my love for the Nile with my students from around the World, for them to experience what I experienced at their age before it to vanished beneath a senseless reservoir.  My students helped me see that there was no logic in mourning the section before it was flooded, but to enjoy what we had, while we still had it and to make the most of everyday!  Again on this trip, even as I was teaching others, the river was teaching me.  Mistakes are okay, that patience is as an important of a skill as any other, to cherish even the smallest of moments. 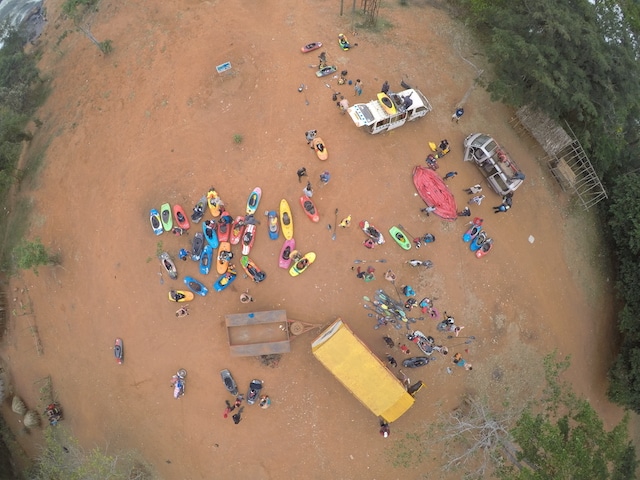 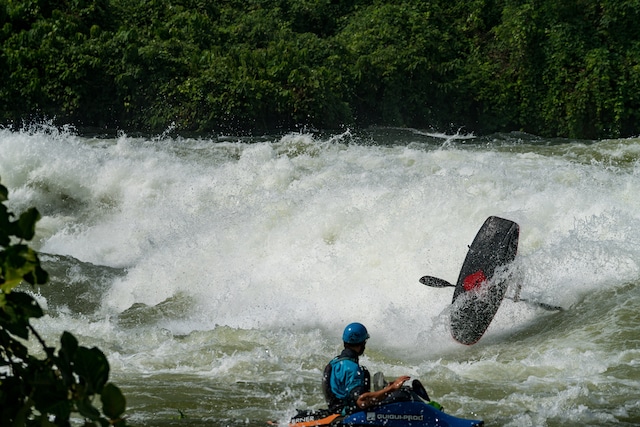 I returned to the Nile a short month after I was there with World Class Academy.  Closing out 2017 and opening up 2018 as my best friends at SEND and I prepared to host UNLEASHEDxUganda.  We thought it was fitting to host an event on the river that had played such a significant role in the development of Bren, Dane and I, (Bren and I actually met on the Hairy Lemon way back when we were 16).   The White Nile was a world renowned river, with some of the best waves and rapids on the planet.  We knew this event had to happen, and we knew we had only 1 shot before time ran out. 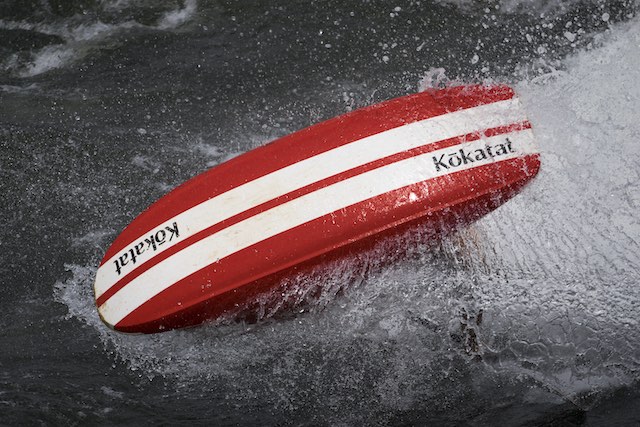 Our goal with UNLEASHEDxUganda was to showcase the Worlds élite kayakers on one of the greatest rivers with a format designed to push their limits in 4 unique stages over 7 days.  This included our desire to bring the incredibly talented athletes of Uganda into the spotlight and let the World see how brilliant they are, that they belong in the top tier and that the development of the local Ugandan kayaking scene is thriving with this river that they call home as their training ground. 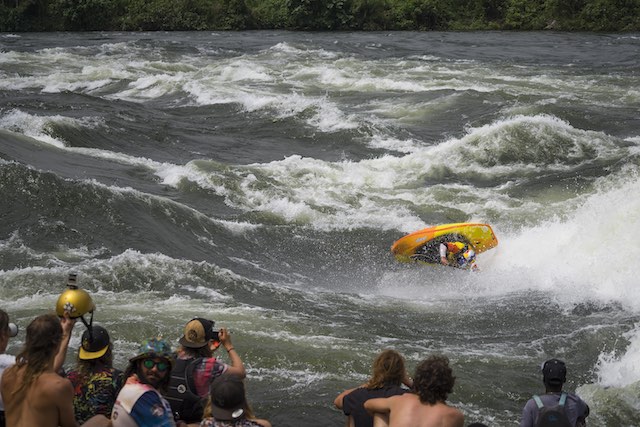 UNLEASHEDxUganda was a special time, the event unfolded exactly as planned, with a only the slightest of hitches.  A big trick jam session on the Cuban in the heart of Itanda for stage 1, the only ever race held on the Dead Dutchman in stage 2, an incredibly competitive freestyle competition on Nile Special for stage 3, and rounded things off with a mass start race through the Hair of the Dog for stage 4.  Each of these individual competitions, within the larger UNLEASHED was a special day.  Especially stages 3 and 4 as both of these rapids are now sadly under water.  We accomplished exactly what we wanted with this event.  The world’s best kayakers laid it all out on the line, showcased their skills on the some of the best Whitewater in the World, while the focus on Ugandan athletes proved to the World that they belong in the conversation among the best with Yusuf Basalirwa and Amina Nakirya placing 2nd overall in their respective men’s and women’s categories, and Sadat Kawawa taking the 5th place overall in the men’s. 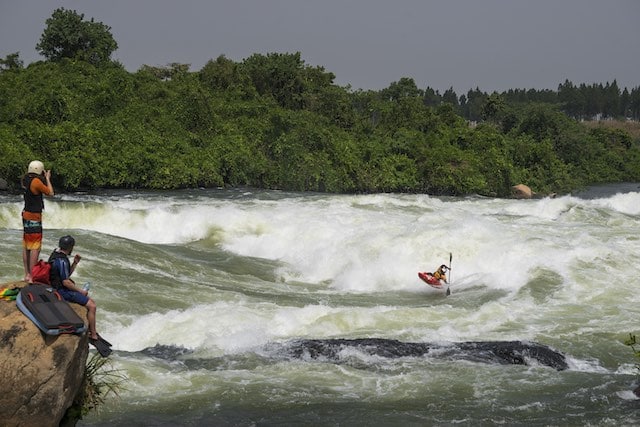 As the dust settled on UNLEASHEDxUganda, I took the final couple days to reflect on what Uganda meant to me.  I knew the completion of the dam was imminent and figured this be my last time on the Hairy Lemon, and within the waves of the Nile.  Thinking back to one memory in particular over and over again, my first run through Itanda with my best friend Nick Simpson, we were 16 and on top of the World.  This memory means a lot to me, and taking the time thinking back on it makes me realise how grateful I am that the Itanda Rapid stills flows free, acting as a defiant tribute to things that have been lost forever. 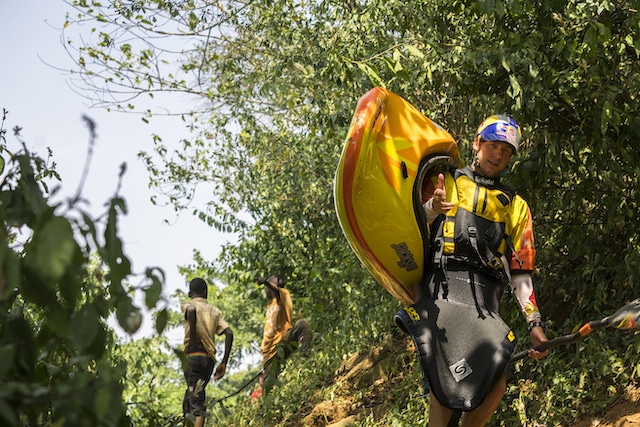 Spring stretched through summer and turned tide into fall, the Nile was still free flowing and I was offered the chance to return for inevitably, the last time.  At the end of October 2018, I made the flight half way around the World with mixed feelings; I knew the Hairy Lemon was cut down, disassembled, not what it used to be.  Was I going to go visit? Or keep the memories in my mind pristine.  What if the river started to flood during my trip, what was my reaction going to be? 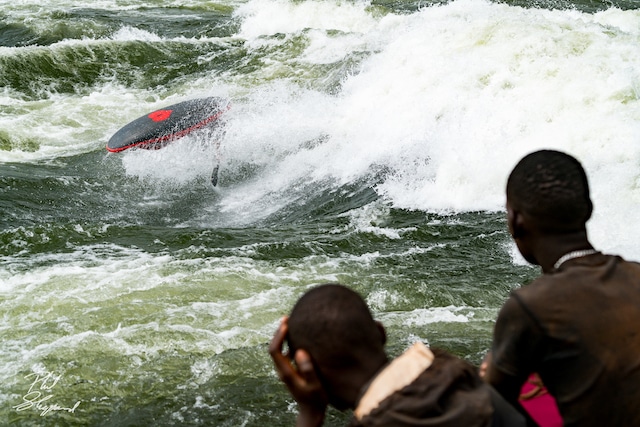 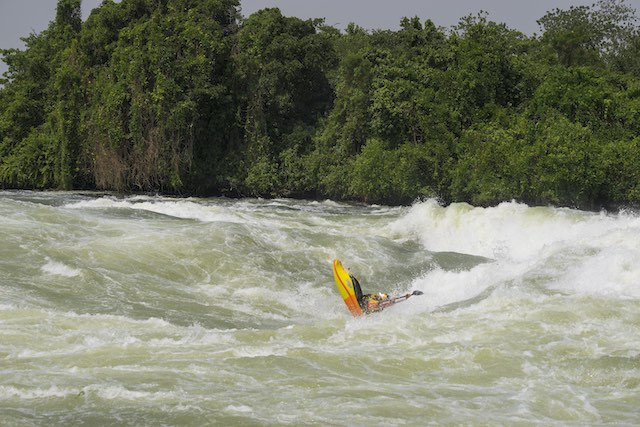 These thoughts disappeared with my first strokes, I was going to enjoy my time, not dread the forthcoming reality.  I chose not to return to the Lemon, keeping my positive memories intact.  Cherishing every minute of every day on the water, adding to my memories without overriding old ones. These 10 days flashed by in the blink of an eye, and all of sudden it was the end. 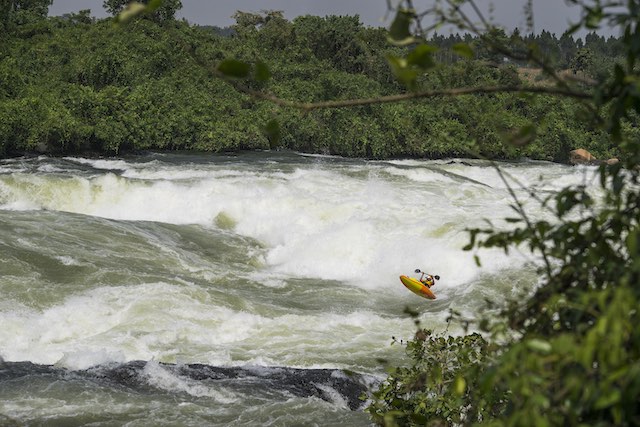 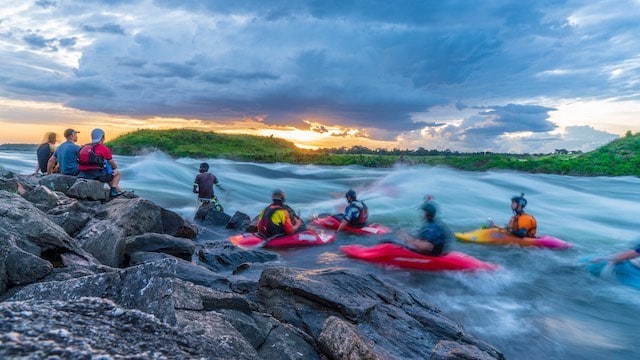 I arrived early on the last day, scared to miss a moment, or the prime flows if the levels went to high.  From 10am onwards, the wave was perfect, never fluctuating, never changing, flawless.  Through the afternoon and as the sun lowered before giving way to the full moon lit night.  Over 12 hours later, in the dark, the wave remained the same.  I was tired, 60+ friends were on shore sharing memories of days gone by and enjoying beers by the fire.  But I couldn’t bring myself to get out of the water, to face the truth that this was the end.  Just one more ride I thought, over and over again.  As it stands, on this eventual final ride, the river gods made the decision for me, taking 1 final token from me in exchange for all that it has given.  I dropped my paddle and the river took it into the darkness, instantly lost in the indistinguishable black below. 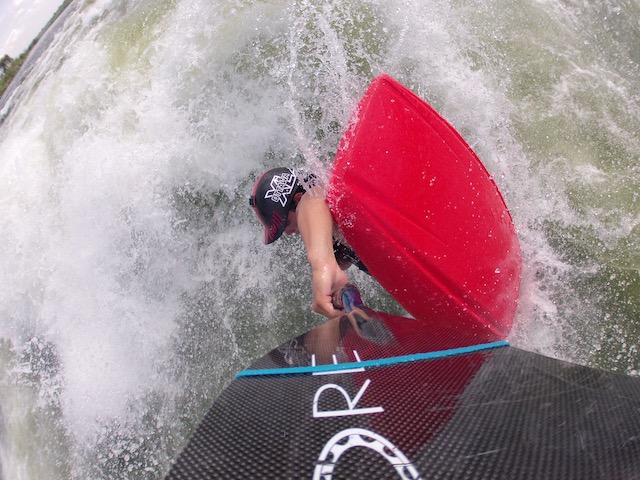 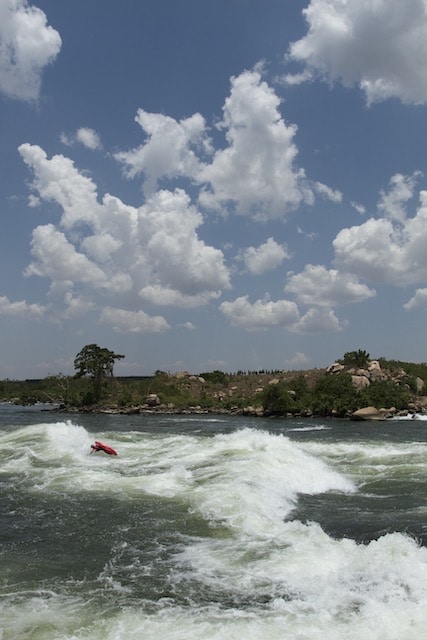 I secretly hoped the river would guide this paddle into the hungry turbines downstream, but it’s more likely it found its way to a deserving fisherman on his lucky day.  5 days later I had been home and gone again, found enjoying the free flowing rivers of Chile as the Isimba dam began to officially fill its reservoir, 2 more days and Nile Special had given way to a rippling current and less than 2 weeks after my final surf moonlit surf on Nile Special, the reservoir was essentially full, silently signalling one more mighty section of the Nile had been conquered by man. 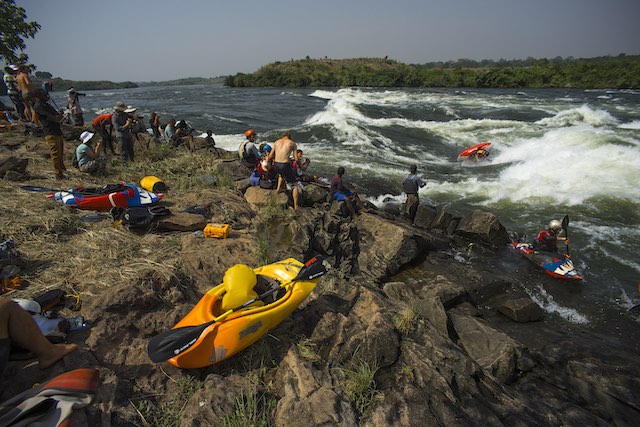 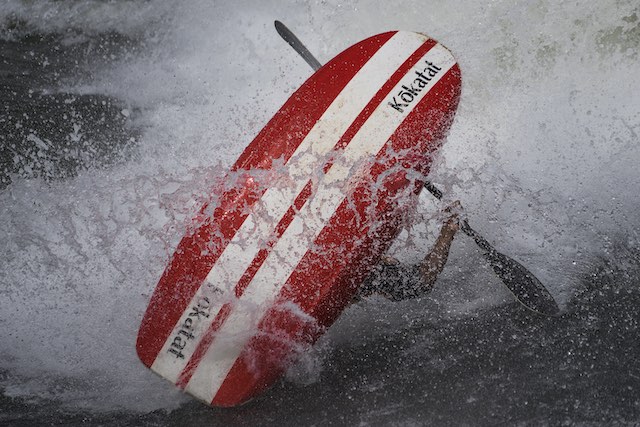 My mind often drifts to the people substantially more affected by this man-made tragedy than I was.  To those who lost their land, where did they go? To those who lost their jobs, did they find new ones? To the people who the river meant more than the World, how did they cope?  Its these thoughts that also pull me back to my memory of my first run through Itanda so many years ago.  Grinning as I think how frustrating it must be to the greedy builders that Itanda still flows free, defiant of the concrete structures that barricade the river above and below.  Rebellious in its efforts to stay free, hoping that people will return to see a small sliver of the famous white-water of the Mighty While Nile in the state that it’s meant to be seen. 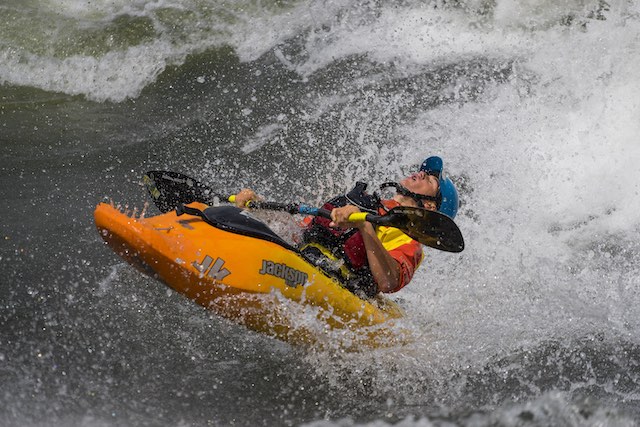