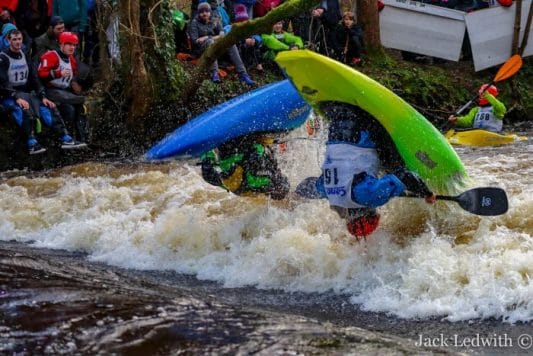 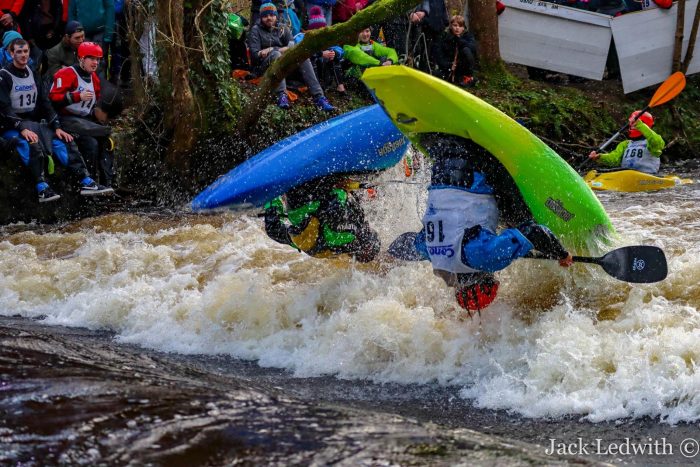 My favorite types of events are the ones that represent the spirit of kayaking the most. The strength of the community, exemplary behaviour and dedication for passion which is kayaking and good fun. And that is exactly what Galway Fest is all about. 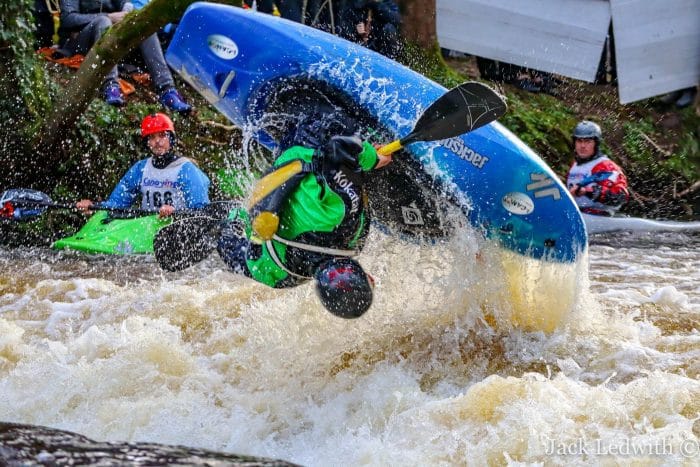 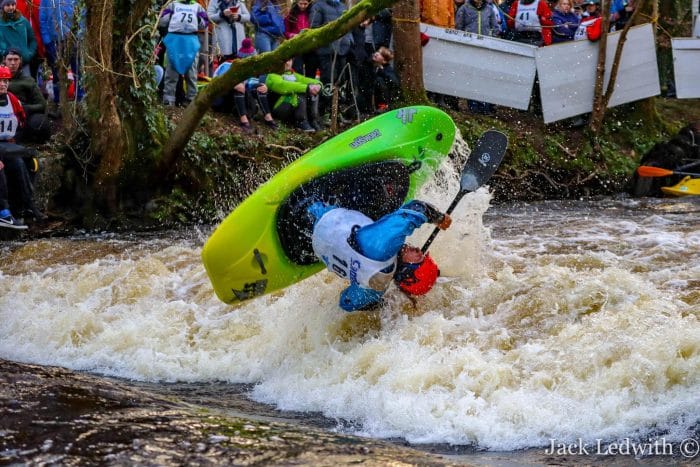 8-10.03.2019 will definetly go to the books for me as one of the most intensive and fun events that I been a part of. It truly was a great experience at Galway Fest on and off the water hanging out with paddlers from around the world in Ireland ! If you are a guest, local Irish paddlers will go above and beyond to make sure you will feel like home and have a place to stay and buddies to kayak with! This year event was legendary in terms of numbers – as the registration had to be stop early because there were 250 entries including guest paddlers from USA, France, Spain, Great Britain, Germany, Poland. Kayakers were divided into categories seven categories – men and women expert, intermediate, junior, unisex c1/oc1. 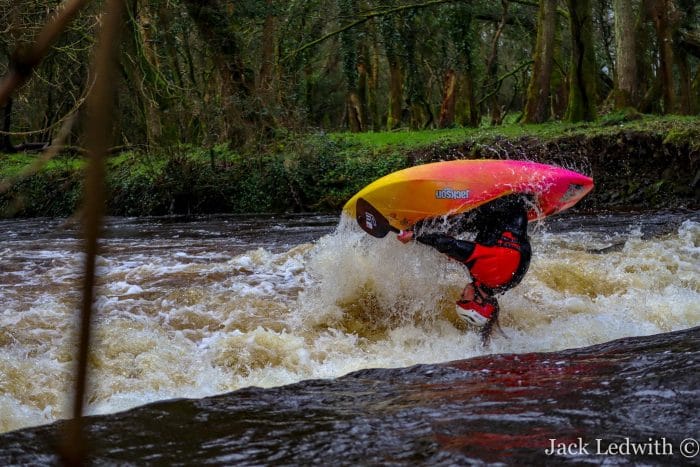 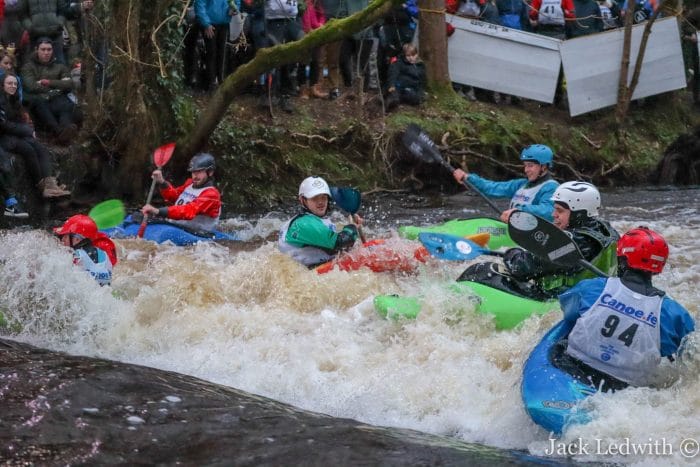 It was my first time to Ireland and I was very excited to finally get to see this beautiful country with a lot of sheep, meadows and great whitewater which I didn’t expect. Arriving on Wednesday evening I took a bus straight from Dublin airport to Galway which took around 3 hours. After dropping my gear in accommodation we headed straight to local pub to meet all the kayakers and make a plan for next day creeking. After sharing a pint of guiness and deciding to head north next morning at 6am we headed back to get short rest. I didn’t bring a boat – but that was not an issue as I got Antix from Barry L. to paddle. Luckly it was raining and water was bursting so we had couple of options. I hoped on the car with Joe and Hunter who flew all the way from USA to experience Ireland and we took off to north admiring beautiful landscape of the country. We arrived to Garrick and went for a section called Roogagh. It was a nice run with sweet falls in the middle. After ~6km run and coffee break while waiting for shuttle we hoped back to cars and drove to Navis Falls to find amazing waterfall which had unfortunately a tree in the middle of It so we had to give up on it but definitely it Is worth coming back for! After it we raced back to south to Ballysadare and find it at high prime levels. At first it looked intimidating but having local paddlers showing the lines gave us a boost of confidence to discover how nice this run was ! After long day we were back for celebration.. 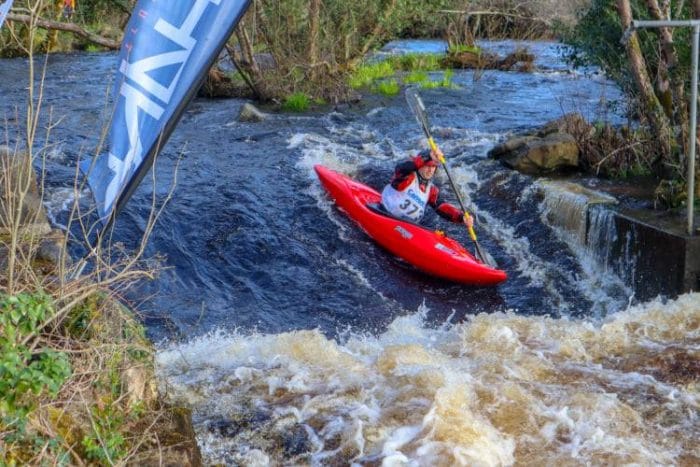 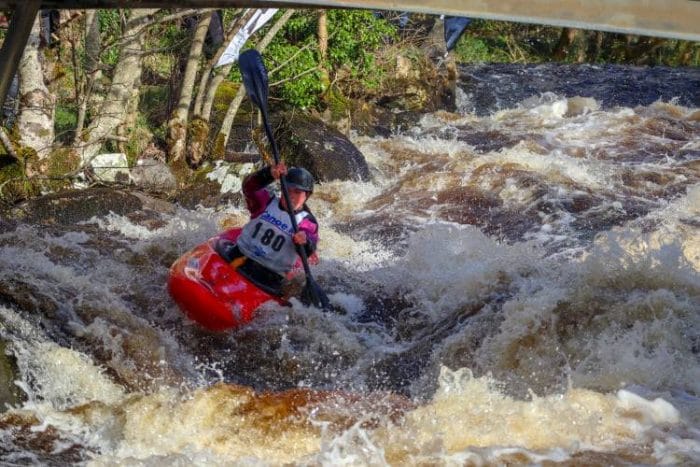 Friday was day of Freestyle which is my main domain – we went to Taum and found a sweet playspot running. I took couple of rides to check how it rolls and quite liked it. However the competition was kicking off soon so had to get changed and wait for my go. Weather in Ireland is whimsical so sometimes it was sunny and couple of minutes later it was raining just to be sunny in another while again. However it was not much of a concern as the show going on was prime – paddlers kept turning up in all categories and providing a sweet show during a Jam Session preliminaries round with music and cheering crowd on the site. Due to the amount of paddlers competition lasted whole day. Both expert Men and Women categories were really packed with stars like Quim Fontane, Bren Orton, Lowri Davies, Aoife Henrahn, Barry Loughne, Lucien Schreiber, David McLure and more. I was really stoked to take 3rd place after the preliminaries round sitting behind Quim and David that dominated prelims. As the evening came – more people came over to cheer at final round where 10 best paddlers were performing 3 rides of 45 seconds. Also playspot had changed a little bit getting more retentive which made it even better and show begun. Women were a great show which was dominated by Aoife Hanrahan. Heidi Walsh came second and Lowri Davies was third. In men it was a total throwdown and everybody were doing a great job but David McLure did not allow anybody to dethronized his position from preliminaries and took the win. Quim was just behind him and I was really stoked to keep my 3rd place as the competition was really tight and just behind my back. 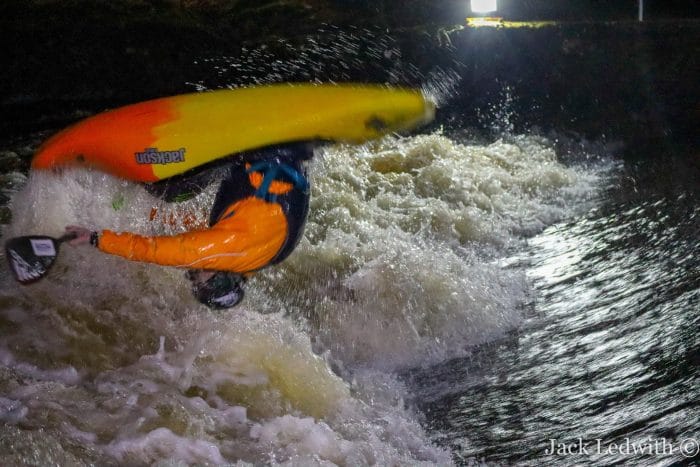 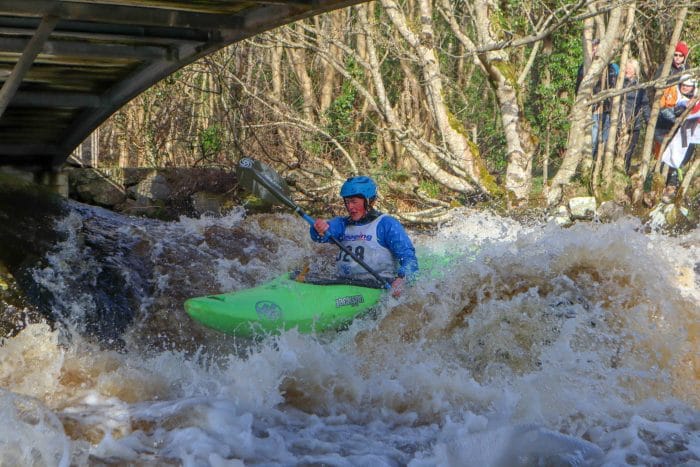 On Saturday we went to Boluisce river as next event was time trial and team race. We did not have a chance to run the river before but it was a great run of continuous class three that took around 6 minutes. Unfortunately for myself I got a bit lost on the course and had to ferry over to catch up to the main line knocking myself out from the overall competition. Person the dethrone as the one that had one most festivals was Barry Loughnane who is specialised in that run – however this time he got pushed to 4th place. The fastest men of the day was Lucien Schreiber ahead of Nicholas Benett and Bren Orton. In Women the quickest one was again Aoifie folloed by Susan Doyle and Lowri Davies. After that time for team race came which was a great fun for team of four. The fastest was Blackout Dave & Buckfast Boys. Interesting fact is the Buckfast in the name which is just outstanding local drink that one has to try in Ireland. Saturday was also a night of big party gathering most of participants to share the stories. 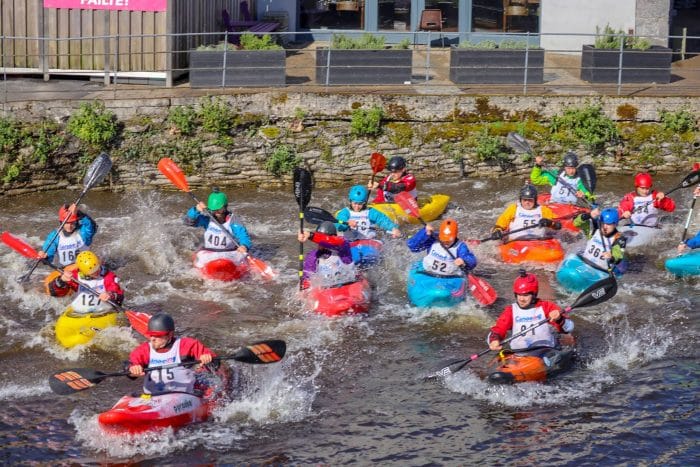 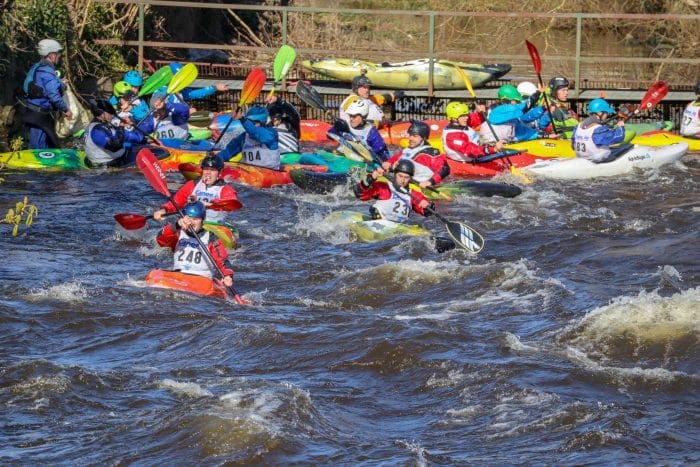 Final day was Sunday where everybody got to compete in the centre of Galway city first racing at mass start – where participants of each category started at the same time heading down small creeks of the city that lead into the main flow and being stopped by dedicated 8ball paddlers which was hips of fun ! Following that there was a boater cross where we raced from one of the main brides to the bay. It was interesting as after first twenty meters there was a narrow path that could fit only one kayak comfortably at the same time and after few meters was leading into a small drop. As you can imagine such start for boater cross was really exciting ! Unstoppable paddlers here were brothers Kevin and Sean Cahill followed by Barry. In women Susan Doyle claimed the win ahead of Lowri Davies and Niamh Cleary. 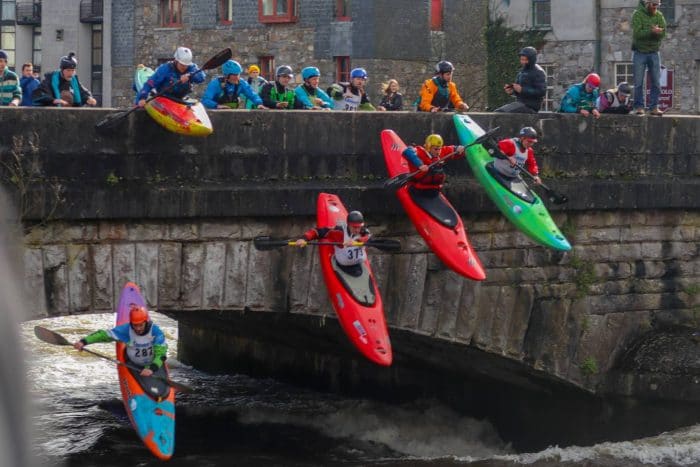 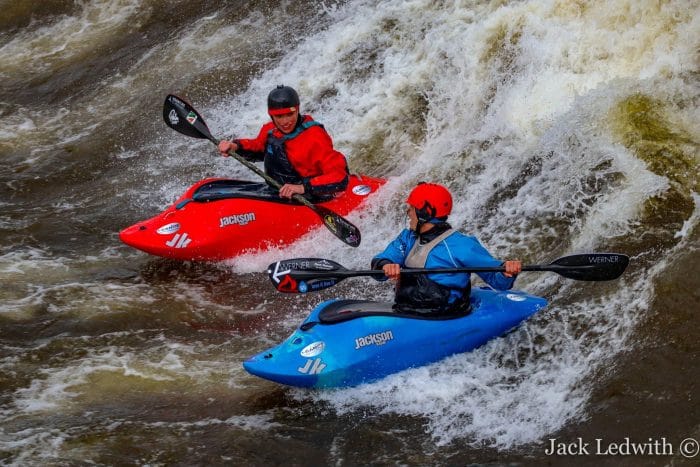 Event was concluded at local university but just before it happened.. me and Lucien managed to squeeze a wave session that I just behind the weir next to the kayak club! Galway is just amazing! There was a lot of excitement going on before the final results, as in Women it seemed obvious that Aoife had dominated the category with her performance being ahead of Lowri Davies and Niamh Cleary. However situation was not as easy calculation in men category. On the end Bren Orton managed to get ahead of Barry just by one point taking the win and Lucien Schreiber taking a third place.
I really loved the event because it gathered people from all around the country that despite of changing weather, distance to be covered and different categories and skill levels – everybody showed up having fun and celebrating Irish rivers by kayaking together! Thank you everybody who made that trip so amazing! There were a lot of people involved in that event and story but there is a special shout out to main organizers – Barry, Aoife and Andrew Reegan for putting event together and despite huge numbers making it great and smooth! I’m definitely saving a date for next year! 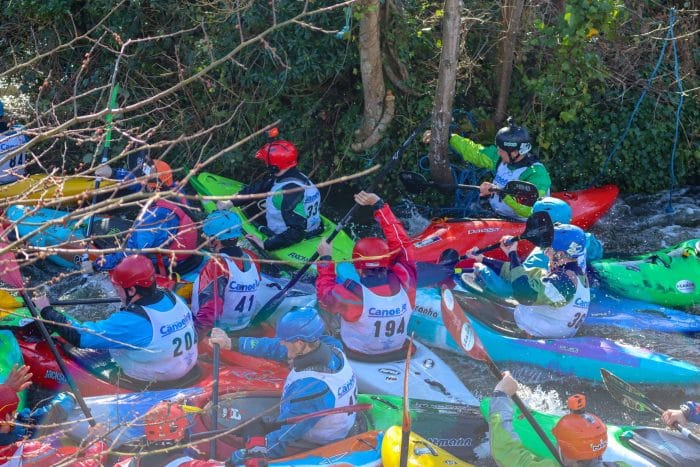 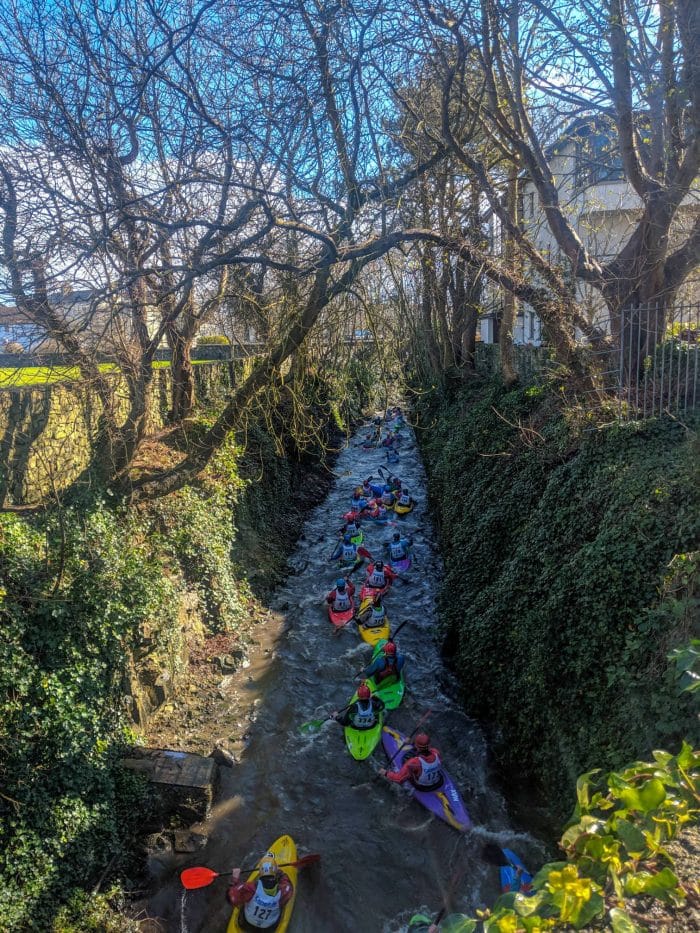 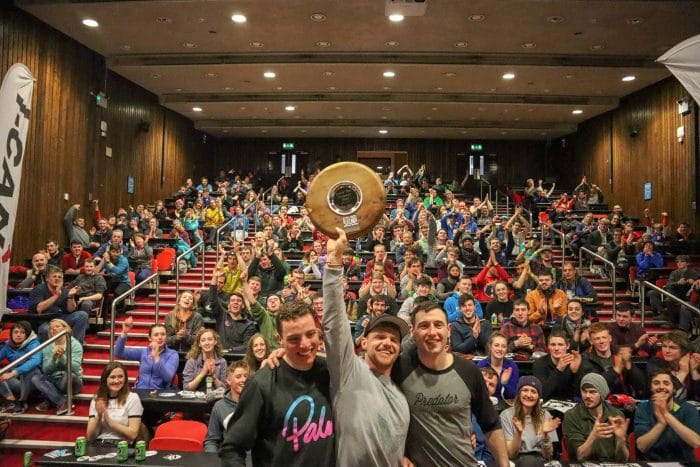 Follow @Galway Fest on facebook and save the date on 6-8 March 2020 for next year’s event that is not to be missed!
Photos – Jack Ledwith

Check out video from the trip!