Basic Knots for Whitewater – How to tie knots 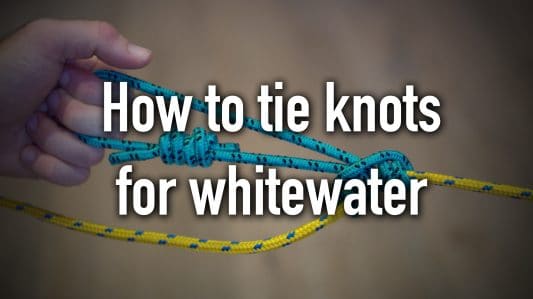 So generally everyone who kayaks, canoes or rafts on whitewater carry a rope and sometimes even some rescue equipment. Not everyone knows how to use their equipment, simply watch some of the more interested ways that people tie their kayaks down as a good example. So here is a basic video that shows the bear essential knots that you should know before hitting up your next river.

Firstly I strongly suggest that everyone who paddles complete a rescue course to get a better understanding of how to help themselves and their friends on the water.

-The Figure of 8 has a few different adaptations. The figure-eight knot or figure-of-eight knot is a type of stopper knot. It is very important in both sailing and rock climbing as a method of stopping ropes from running out of retaining devices.

-The Alpine Butterfly. This is a way to create a loop in the middle of the rope and allows you to attach a carabiner to this for z-drags and other uses. Start by grabbing a bight on the rope and twist it and place your finger on top of the twist, then twist it one more time. Now with the bight place it under the rope and push it through where you have placed your finger.

-The double fisherman’s is a way to tie together two ends of rope and allows you to create a prusik loop which can be used for creating a movable anchor on a rope. To tie this first place both ends of the rope parallel to each other. Now place one end of the rope over the other, loop run it all the way around the rope and then loop it over once again to create an x. Next place your finger under the x and then pass the end of the rope behind the x and pull tight. Now flip the whole rope over and do the exact same knot on the other end. Now pull them tight and both knots should slide together.

-The Prusik knot allows you to tie a prusik rope to another rope which essentially allows you to create an anchor on a rope that can slide and move when you want it to, however when weight is applied to the prusik rope it will night and hold. First place your prusik loop over your rope, bring the bight back around and place pull the night under the loop, do this again and the. Pull the bight of the rope tight. Work the knot to dress it right.

Thanks and I hope you enjoy playing around with these knots.
Jez