End to the 2018 Season in Michigan 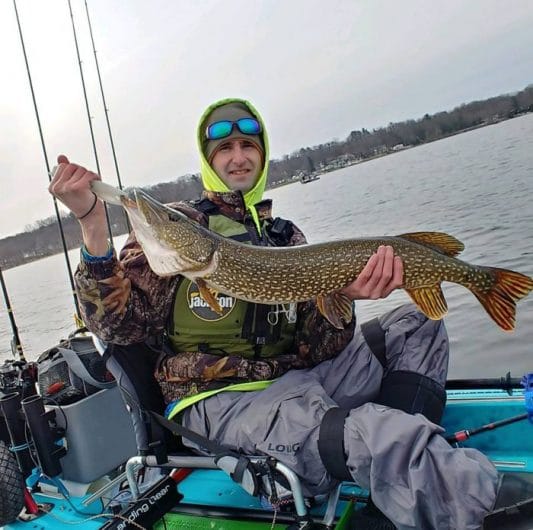 End to the 2018 season in Michigan
Cold weather and snow has started to fall here in the great lakes region to end what I would call one of my hardest fishing years here in Michigan. To recap on my season highlights and some of the events that’d can be swept under the rug. Michigan Kayak Trail beginning in April on White Lake in Whitehall Michigan. Season was off to a cold bitter start despite my eagerness to get out on the water. I was fortunate enough to make it to the KBF 2018 National Championship so got a taste of open water in March and shook out some cobwebs. 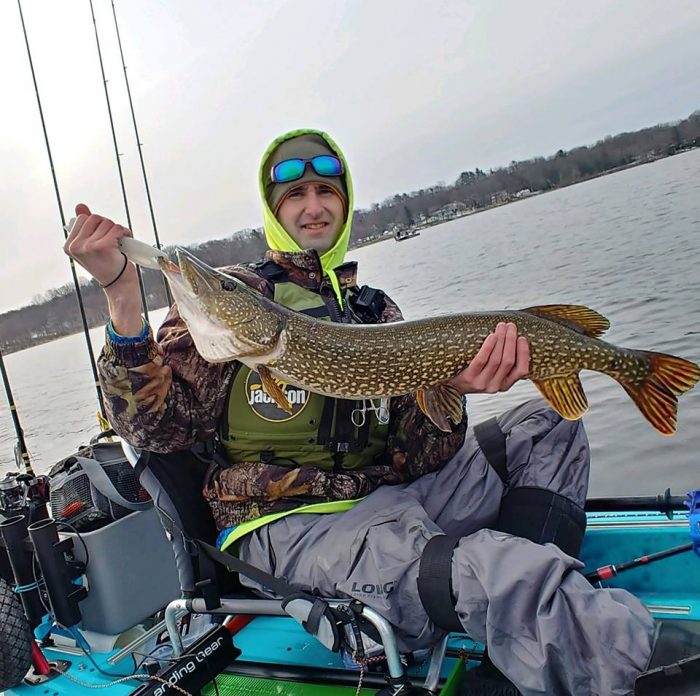 The day started early and was a drought for catching much of anything for most competitors. As the day progressed after numerous moves and much water covered I finally hooked into a fish putting me on the board. Mid-day I was fishing a weed bed and thought I was hung up so I pulled. While pulling the line I could feel and almost imagine the movement of a large tail swaying back and forth. I dropped the line from my hands and set the hook. My medium light rod about bent in half as I pulled in a personal best sized pike. Got my blood pumping and drove me to continue fishing the rest of this cold tournament. Found a nice bass and some other small bass to bump but couldn’t bring a limit to the board. However the two fish I was able to catch brought me 25th out of 120 anglers as most found that day to be unproductive. 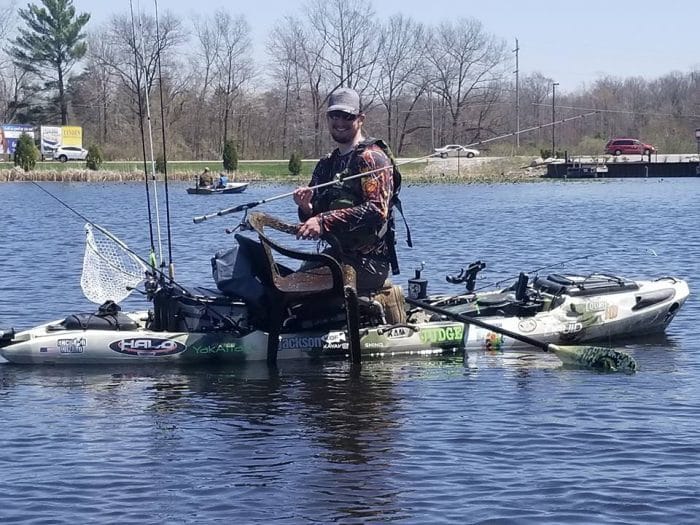 Tournament two bit warmer started as a great day. Had no time to pre-fish and was exploring a new area on Spring Lake Michigan. First cast and the lure barely hit the water, bam bass. Small but gladly took the photo. Released the fish, second cast another. Third and another, I was on fire! Ended up with a limit in a matter of a half hour however I had fooled myself. My entire stringer was rejected a short time later. I had confused the length limit with the previous year. Had a good laugh about it later but at the time devastated. One fish at twelve inches to put me 72/84 anglers. I did manage to snap a shot of a lucky angler Anthony Judge my brother, which caught his personal best patio chair. 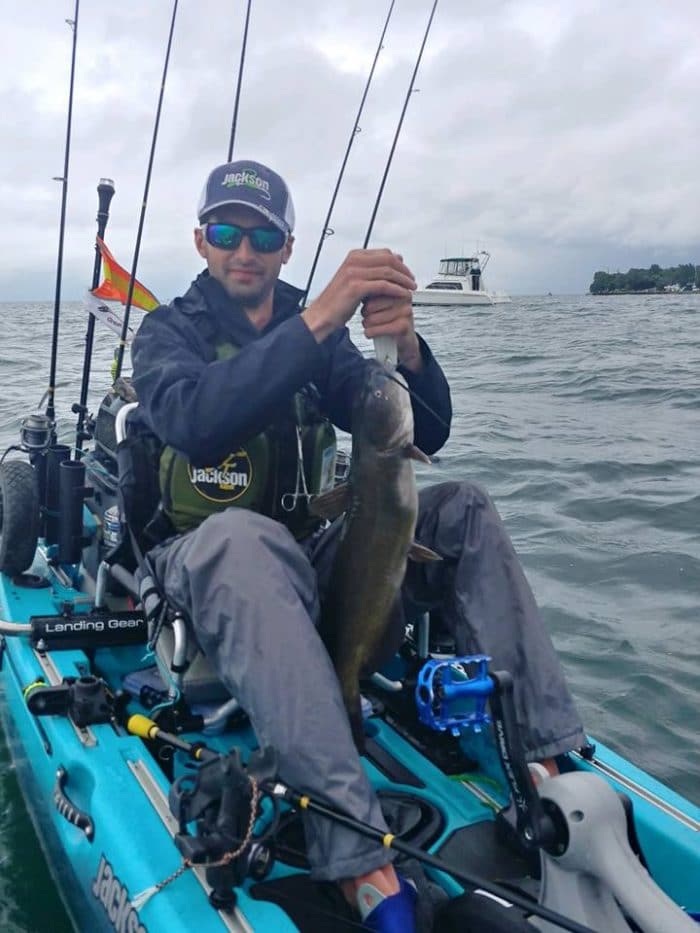 A yearly tournament host by Kayak Fish the Great Lakes Region the 2018 No-Mo Charity kayak fishing tournament. This tournament is one I look forward to fishing yearly as it is a multispecies tournament that benefits Make A Wish Foundation. Good weather and lots of anglers of a field of 122 made for a fun day. I ended up 63rd but I had a field day of slamming pike. The next week a KBF trail tournament out on the famous Lake Saint Clair for its big bags of bass. It was a day too, not for me as I ended 67/79 but from #65 to first place 70 inch stringers with first place at 98 inches. I did however get a personal best catfish. 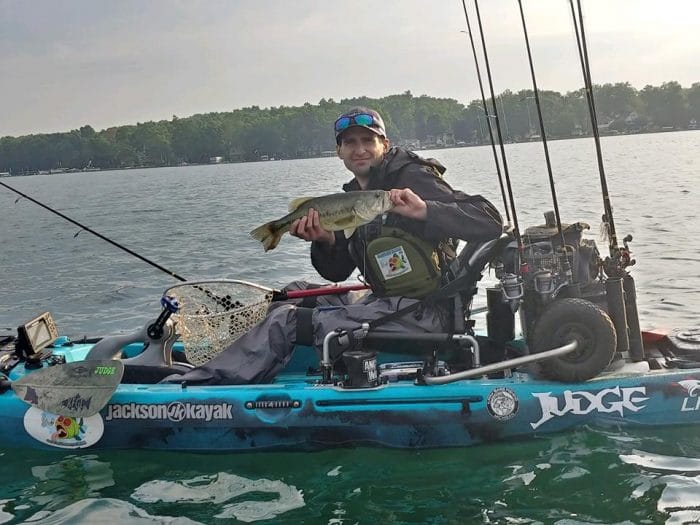 A few weeks later in June Gull Lake Michigan. Where I began tournament fishing and have done quite well throughout the last few years. Comfortable fishing this lake I went in with high hopes. June fishing weather was warming up but tournament day fell on a cold and rainy one. It poured and made it miserable, only thing I felt that was for me was that the wind was at a minimum. Covered a lot of water and numerous casts and lure changes. Finally caught a break mid-day and pulled in a nice one. This tournament left me 24/83 cold and wet.
Tournament Four Kalamazoo River. I have spent a lot of time fishing parts of this river chasing smallmouth. I actually had time to get to pre-fish for this event. Pre-fishing went terrible and I had abandoned any possibility of fishing my go to areas. So with no time left and minimal planning threw a wildcard and went for a new stretch. This particular stretch had the cards stacked against me as it was the area of an oil spill a few years prior and all the locals I had spoken with had said the fishing had not returned. Was too late to plan anywhere else and had a lot of spots I wanted to try regardless. 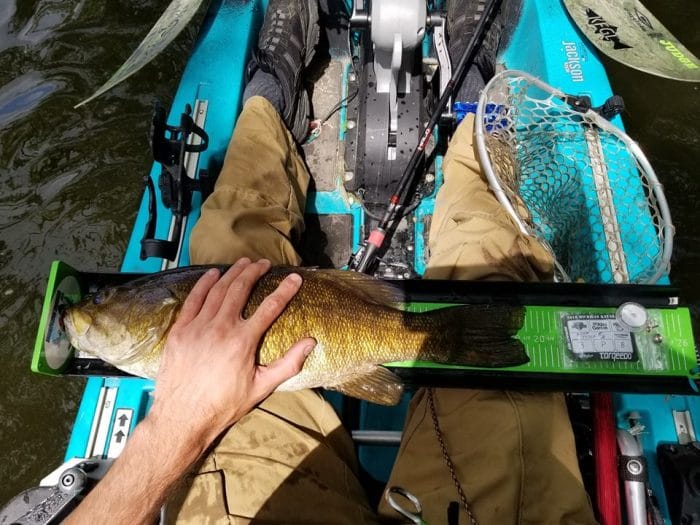 Moring started off great, got to the launch unloaded with some fellow competitors and got on the water. Most went upstream I did as well to a point then went wild. Over a fast rapid a shot downstream. After the plunge over pulled off to a side and set up shop pulling in a few fish. Went on down the river pulling up a lot of small fish. Good sign for the river but not for my scoreboard but progressively grinded it out bringing a limit. Half hour until tournament end and ran out of river from the pickup point. There was a bridge further down and would be a fight to come back upstream. I reluctantly went for it. Good thing I did. Nineteen and a half inch smallmouth and personal best river fish bumped me fast up the board to 6/71 for the tournament.
State Championship tournament on Lake Mitchell and Lake Cadillac. Arrived early to the launch on Cadillac as I had fished Lake Michelle and did not do well and had set up a game plan for Cadillac. With Angler of the year up for grabs and being in the top 20 was hoping to crush the day with a hefty limit to boost me up. Great day to be out on the water terrible day to be a tournament angler. I was able to pull in one twelve inch fish and end up 37/45. This also had left me 16th out of a field of 161 Anglers for the season.
So as you can see 2018 is leaving me with a sweet but bitter end. I have caught a few new personal best fish, have had some honorable placements and made new friends and memories on the water. I’m patiently waiting for 2019 and the adventure that it will bring.