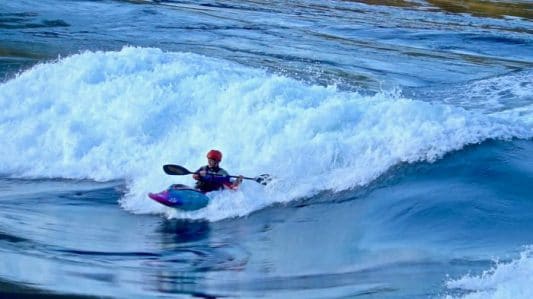 I’ve always dreamed of how magical it would be to surf Skook, but somehow I’d never heard of the magic in the water. I’m fairly certain I’m not the only one either. In all of my time drooling over footage of the wave with friends no one ever mentioned it. During certain times of the year, bioluminescent plankton inhabit the costal waters at Skook. When agitated these plankton glow, but you can only see it at night. If you’re lucky enough to visit Skook during these periods and paddle out at night, you enter a whole new world.

While the rest of us hiked out our second to last night at Skook, my friend Dean paddled back to camp in the dark. He arrived at camp with wild stories of the glowing water. I had trouble even imagining what he experienced. The next night I was more excited than I ever thought I would be to paddle an hour of flat water in pitch-black darkness.

We started the paddle back to camp late in the evening and stopped in a bay to await pure darkness. It took a half hour or so past sunset before we started to notice the water glittering around our paddle strokes. Another ten minutes and the water not only glittered but glowed baby blue for a few seconds with any agitation. We gleefully stirred the water with our paddles and splashed it onto our skirts to watch it light up and shimmer. It was as if every motion dripped stardust. I wish I could share photos of it, but it was simply too dark. 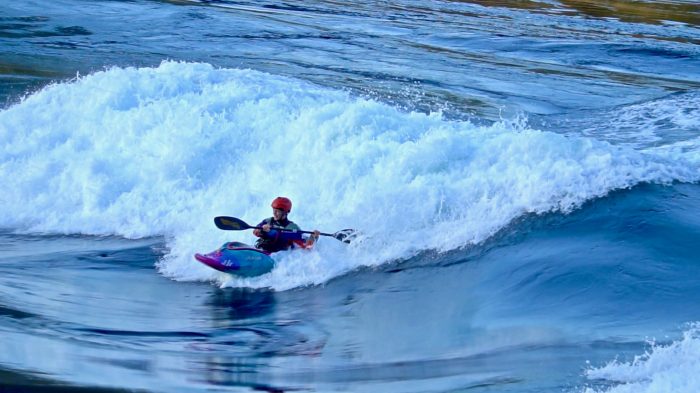 I spun my playboat in circles, flabbergasted by the shiny blue swirls following my movements. Suddenly I stopped spinning and noticed a large, glowing mass staring at me from underwater. I screamed and paddled swiftly back to Dean. I thought I’d narrowly escaped death by a sea monster when he laughed and told me it was a harmless seal. We studied the empty black scene until the seal popped back up. We could watch it emerge from the dark depths and swim around under us because it too was glowing!! Imagine watching a six-foot glowing seal swim right underneath your boat! Joyful and still a touch terrified, we played with the seal for a half hour. It seemed to be curious about the strange surface creatures stirring up the water. Eventually it must have gone to bed, so we too headed back to camp with illuminated strokes and gleaming wakes. Along the way we came across schools of fish that mimicked fireworks as they swam off glowing in every direction.

I’ve seen a lot of amazing things in this world but have never felt so awestruck. There aren’t enough words to describe the magic of this experience. While the wave is obviously amazing and worth the trek, try to plan your trip for when the bioluminescent plankton are in the water. Otherwise, you’ll only experienced half the magic of Skook.