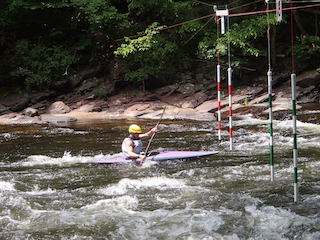 July 14th and 15th this summer was the 9th year of the Jamie McEwan Triple Crown, and this year in the middle of the summer we had water! This was very exciting as two years ago for the July event, we had drought conditions and had to turn the event into a paddle coaching day, which was great but not a competition! This year we had a core crew of 15 competitors for 4 events. Andy Kuhlberg organized the Triple Crown again this year and added a new really fun event – freestyle through the Slalom course! It was really fun and tested all aspects of paddling in one race – freestyle skills with a timed run through gates over a rapid. The other triple crown events, the slalom race, the down river race and the freestyle competition were included as usual and provided plenty of challenge and fun. 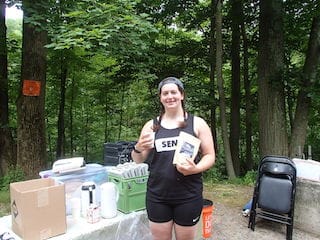 The Slalom course this year was really good especially for those of us that don’t paddle slalom except during the triple crown! There were several thread the needle moves and some crashing through holes that required good skill and planning! The down river race was shorter than normal but made as hard as usual or harder by the pre-race portage of the boat to the start! Huge Thanks to Katelyn Green for helping me carry the speeder to the top of the race course for the downriver race – I could not have done it without her help! Next year, the portage part may be a race in and of itself! 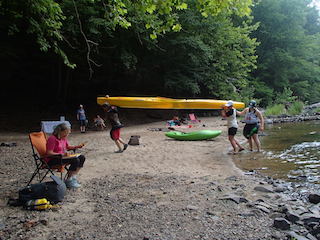 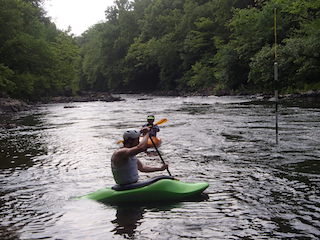 The top three men’s finishers were in descending order: Jim Sullivan, Devon McEwan, and Austin Huck, and on the Women’s side: Jessie Stone, Katelyn Green, and Sasha Rioja. It was a great event and made greater by all the volunteers who came out to make it possible – thank you to all the locals who helped out! And thank you to all the sponsors too – we could not do it without you! Competitors and volunteers were fired up by Wild and Free Coffee – thank you Nick Troutman, and we hope that Devon McEwan will be converted to Nick’s coffee over dunkin’donuts from here on out! 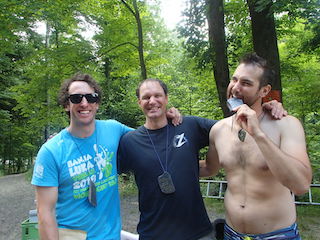 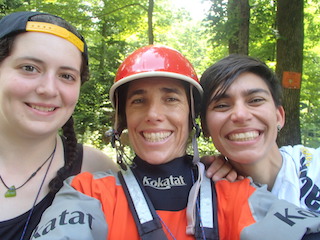 For me the most inspiring part of the Triple Crown was watching Katelyn Green paddle. I have watched her for years now and she has really developed into an awesome paddler with a variety of skills. Her freestyle is really good and in case you didn’t know, she is trying to make the Olympic team in C-1 slalom! Go Katelyn!! We hope to see all of you next year at the Triple Crown! Its one of the most fun events out there!!