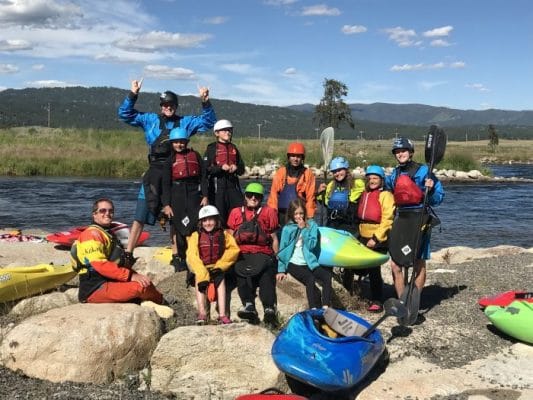 For the fifth year in a row, I had the pleasure of being an instructor at Kelly’s Whitewater Park. The Kelly’s Kayak Academy is a completely free program for kids ages 10-18 that are residence in Valley, County Idaho. This year the formats for the classes were slightly different for us. Every day for the class we had a morning and afternoon group composed of 6 or 7 kids that each lasted 3 and a half hours. In total there were 4 different sessions that lasted 3 days, with one day off in-between sessions 2 and 3. What this did was allow 4 weeks’ worth of teaching in just under a two week period of time. This created quite a few benefits from past years, along with its own challenges! This year in total between Kayak, SUP, and River Surfing we added about 40 more students that went through the program! Pretty much every class was completely full, so that extra week thrown in there just got so many kids outside and learning about whitewater. As an instructor it was also nice to smash out 4 weeks worth of teaching in such a short time. The previous years had shorter classes, but in a 4 days on/ 3 days off format. The longer and nonstop weeks were definitely very tiring by the end, but it was worth it because now I can be here in Norway that much earlier! 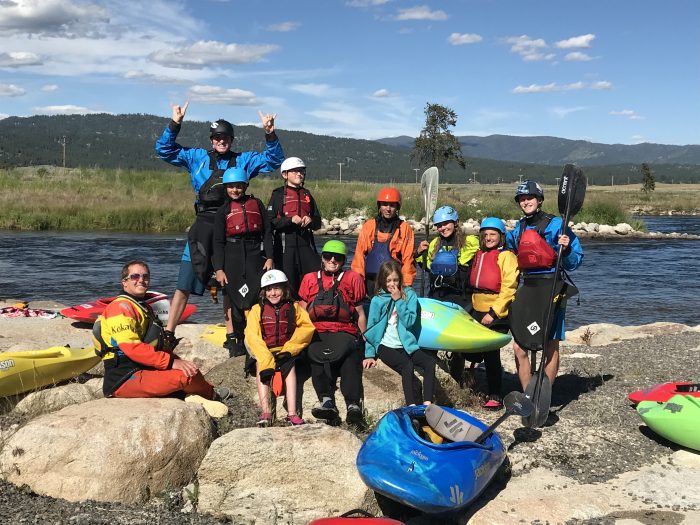 As with every year, it takes multiple days to remember or figure out what the best flow is to move through everything. The shorter sessions also took a little bit of time to figure out as well. Each class varies quite a bit in skill based on whether we have returning students, and of course the adventurous nature of the kids. Our first week was an epic class in the morning with tons of returning kids. That allowed us to really utilize the park and surf the middle wave a ton! Noah Spanenburg is a kid from McCall that is an absolute ripper at only 13, and not just in kayaking. Noah not only did the class, but helped out as a Jr. Volunteer instructor for the Park as well, along with River Cogan in the afternoons! Noah dialed in his loops and cartwheels over the 2 weeks. River has taken the class every year I have taught, and has had a crazy transformation from the scared little kid that didn’t want to do anything, to a 16 year old that has all of his own gear, paddles on the Salmon, and helps us out with class! Other kids like Jonah, Maverik, and Ethan in their first session were conquering whatever myself Clay Wright, and my brother Hayden would throw at them.

For the rest of the sessions, many of the students were newcomers and were able to learn a ton in such a short amount of time. Usually our first day was done in the flatwater above the park. We start them out with a sweet seal launch in to the water down a 15 foot tall bank down to the water. From there we would go over all the basic strokes, wet exits, and “hand of Gods”. Then got to the fun part which is a staple of the Kelly’s Kayak Academy and an instructor favorite…. SPONGE GAME!! Basically, we take 4 or 5 sponges, get them nice and wet, and huck them at everyone’s faces. It is a great game to just get them comfortable in a boat and paddling around, edging, and getting off balance without thinking about it. By then we are ready to talk about eddy turns and peel outs and important river features. Then depending on the class and how they do, we run them down the top rapid and middle feature of the park and call it a day! 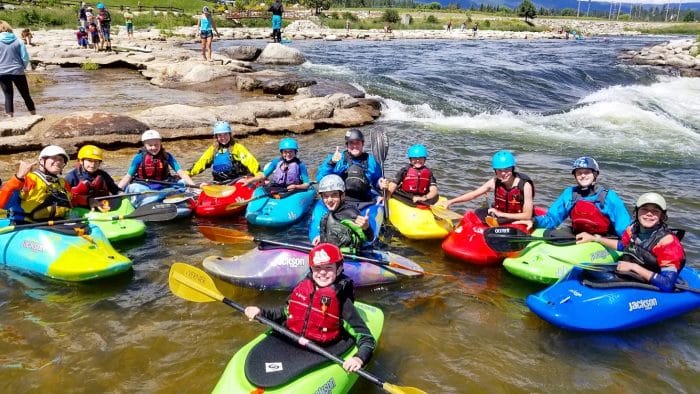 For day 2, we go on our “River Journey” where we load up the van and drive a mile upstream of the park, just below where the dam is. Up there is stronger current and good eddy lines where we can work on ferrying and peel outs some more. To start, there is a sweet 6-foot seal launch that is intimidating for the kids, but pretty much all of them end up doing it. From the dam to the park is just super mellow flatwater, so that means more sponge game to pass time on the float down to the park. Once we get down to the park, we are back at a very calm eddy line to practice some more before running the top rapid. The top rapid of Kelly’s is just a big powerful hole with a nice green wave on the river left, with a small but powerful seam/curler directly behind the wave that is usually the culprit of making them flip. Once we do a few laps on the rapid we make our way down to the eddy below the middle feature to work on our rolling. For day 3 we do the first seal launch at the top of the park, do a quick warm up, and play a game of kayak polo! For this, we play with a sponge and have 2 instructors as the goals. You may not paddle with the sponge, must make 3 passes to different teammates, and pass the sponge to your “goal” with a clean catch. This is another great game to work on maneuvering the kayaks without too much thinking. From there we do some more peel outs, and then just do a ton of laps on the top rapid, rolling, and some easy surfing depending on the kids. Hayden and myself tend to do pretty well with teaching rolling, so we usually get about 60% of the kids to get at least one roll by themselves, which is pretty good with how hard of a skill it is.

I keep coming back to teach at Kelly’s for many reasons. Having grown up paddling and being where I am right now, the opportunity to pass on this awesome sport to kids fairly close to where I grew up is an awesome opportunity. It is always so rewarding to see a kid go from being unconfident, not only in kayaking, but in everything else, and then having a ton of fun and get the feeling of doing something they didn’t think was possible! It is also awesome to have such an outdoorsy community in McCall and Cascade, so for a lot of kids this become another hobby for so many. All of this would not be possible without Mark and Kristina Pickard, who fund the entire program and make it all possible. They are also the ones who built Kelly’s Whitewater Park, and ran the Payette River Games a few years ago. Not being paddlers of their own, they have just developed a passion for helping the Valley County community in whatever way possible, and this Academy is the child of their own generosity which has affected so many. Kelly’s is also the perfect whitewater park for any kayaker. The top hole at good flows is truly world class, literally having the ability to give up every single freestyle trick possible. The middle wave is also the most gentle, welcoming, and surfable wave/ hole I have ever seen, and is a great spot for practicing hole tricks in a flushier feature. This park has really given the community a great resource for being active, and allows us to a lot with the program very easily. 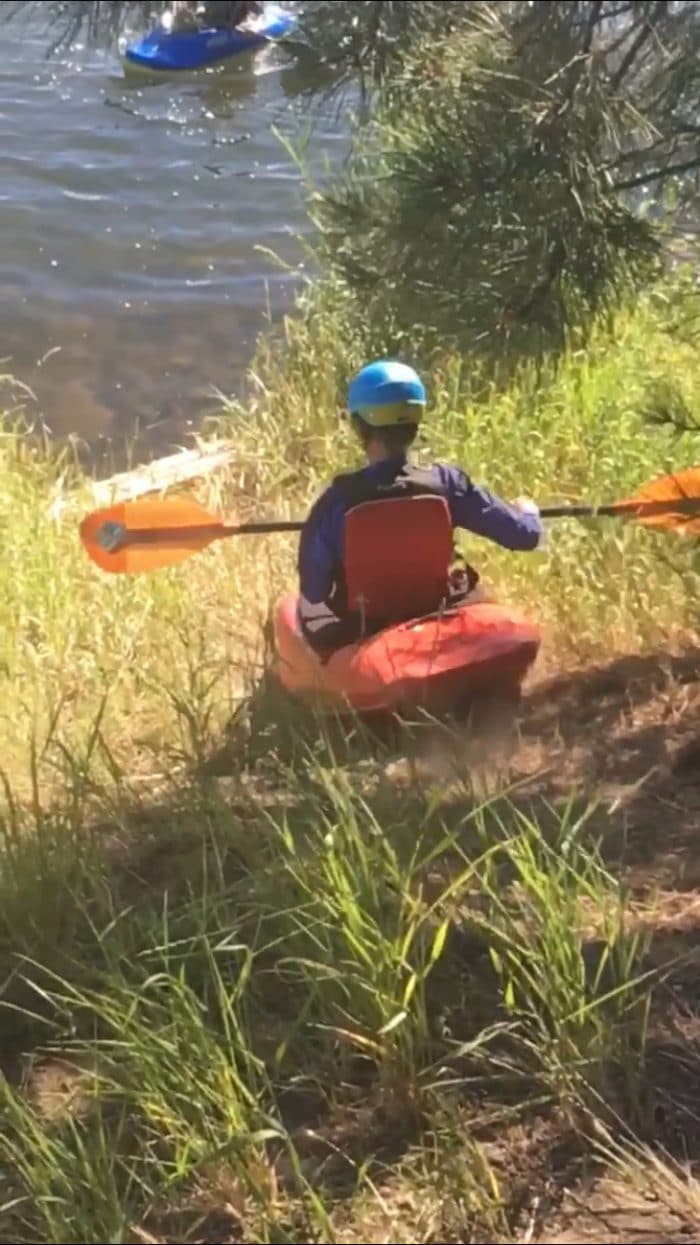 Another awesome addition to the community in McCall is the “Float your boat” program in which kids can do 60 hours of community service and get an entire package of gear for either kayak (boat, paddle, helmet, skirt, pfd), SUP (board, paddle, helmet, pfd), or Surf (board, helmet, pfd). There were a lot of kids who came through the academy with their own gear because of this separate program.

So as you can see, Cascade, Idaho is home to a pretty epic place to learn how to kayak. Myself and all the instructors have a blast, and hope that we make a big positive impact in the kids, and it is something that they will always remember. I will of course be back next year for another epic couple of weeks! Unfortunately
See you on the water,