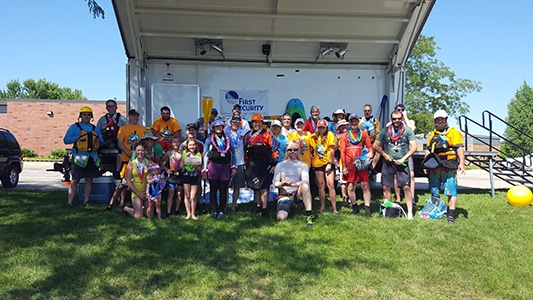 The Charles City Challenge was another hit this year! The initial event date saw high water and officials postponed the event until the river subsided.  Two weeks later, the river was down to a near perfect level for freestyle playboating, the sun was out, and paddlers were ready to have a fun filled day of whitewater! Local vendors presented a wide array of products for everyone out enjoying the festivities. Crawdaddy Outdoors displayed numerous kayaks and accessories as well as offered demos for the day to many paddlers. A huge thank you to all the sponsors and volunteers that made the event a great success!

Twenty-five paddlers made the trek from near and far for the fun filled day of whitewater paddling. To start the day off, paddlers headed to the top of the whitewater park for boatercross and SUPercross! This action-packed, mass-start series provided plenty of excitement for paddlers as they navigated the whitewater park features, tagging set buoys and finishing by tagging giant beach at the bottom of park. The crowd cheered and jeered as they watched smooth lines and carnage unfold before their eyes. 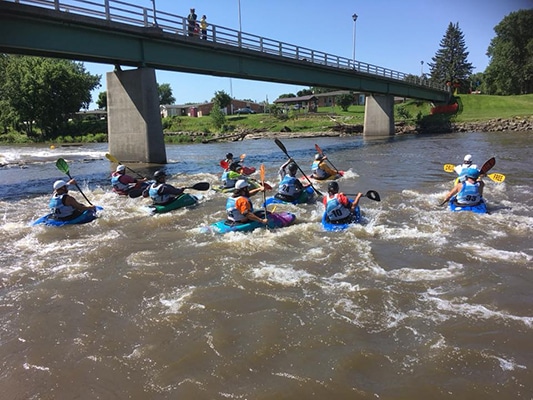 Next up, Freestyle Rodeo! The beginner men, women, and youth took to the bottom feature of the park, Exit Exam, to show off their freestyle kayaking skills. The kayak rodeo had yet again the official judge, Mr. Safe T, and assistants keenly assessing the competitor’s tricks and style. 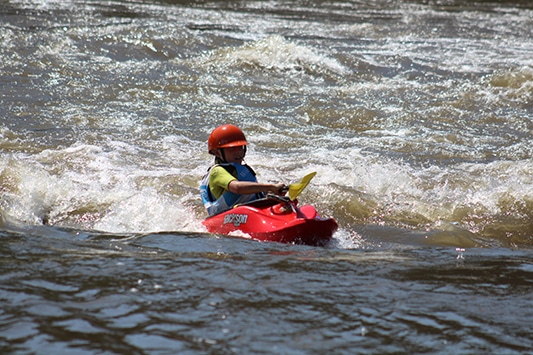 With the morning events concluded, the lunch hour brought the innertube intermission. Open to the public, teams of 3+ tubers hit the river for an all-out downriver race to the finish target. With creative team names such as, ‘Death by Yogurt’ and more, tubers had to navigate the whitewater park all while keeping connected as a team. Remaining connected and hitting the target proved to be a tough challenge as some groups missed the end target but sprinted upstream as a team for the final tag. 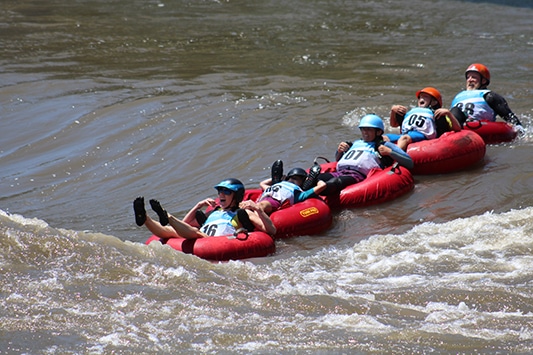 After the intermission, the action kicked off again with intermediate/advanced freestyle kayak rodeo. The paddlers consensus was to have the rodeo in the officially renamed middle feature, Tew Shanez. A bouncy, foamy hole at current levels offering up dynamic surfs and big opportunities for tricks. My Safe T and assistants again assessed the competitor’s tricks and style and each participant took two, two-minute rides to impress the judges. Entrance moves, spins, loops, space godzillas, roundhouses and phonics monkeys made for tough scoring decisions and ample entertainment for spectators. 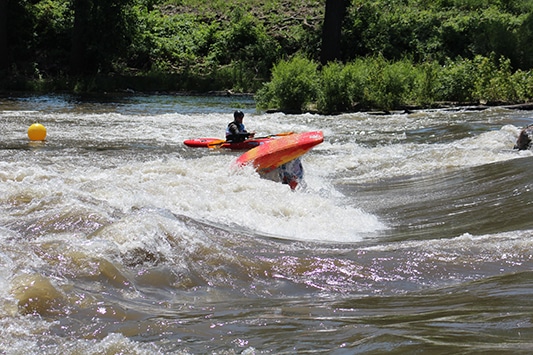 Moving in the afternoon, the SUP Surf Comp on Double D Wave provided plenty of slashing carves, technical tricks, and some wipeouts for pleasing the crowd too! 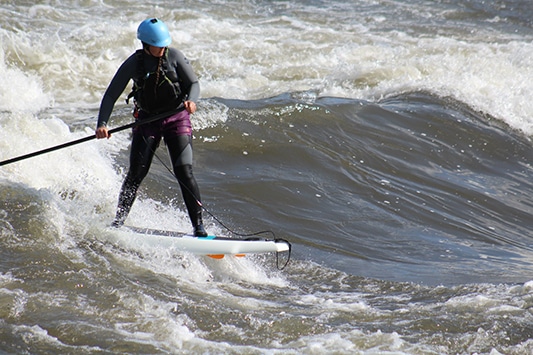 Concluding the competitive events for the day, the Orange Race pitted SUPs and kayak in two-person teams against each other in another mass start downriver race. Team A competitors raced to the rendezvous point meeting their Team B mate anxiously awaiting. Upon reaching the point, the team would devour an orange as fast as possible then Team B would enter the river and finish the race in all out spring to the end target. Much laughing and orange peels flying ensued in the organized chaos of the first Orange Race at Charles City Whitewater. 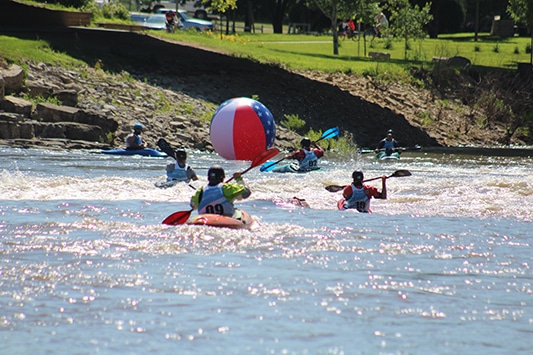 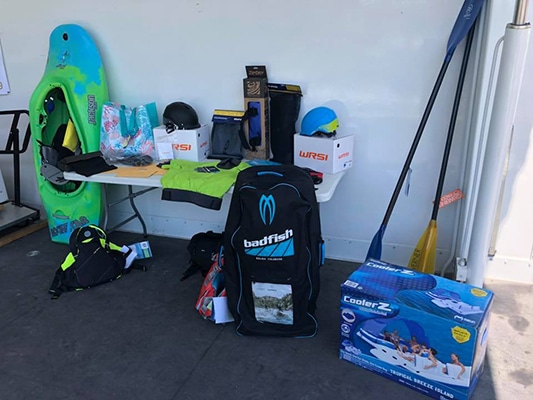 Wrapping up the full day of whitewater fun, paddlers took to the river again for the final event, the SUP Surf Clinic. Numerous smiles and exhausted bodies finished out the day as the sun dipped lower, concluding yet another great event at the Charles City Challenge. 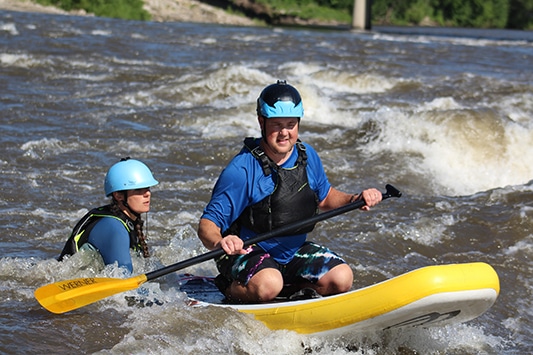 A HUGE THANK YOU to all the volunteers, sponsors, paddlers, spectators, who supported, provided, and enjoyed our event. It wouldn’t be possible without all of you! Join us next year for the Charles City Challenge 2019! 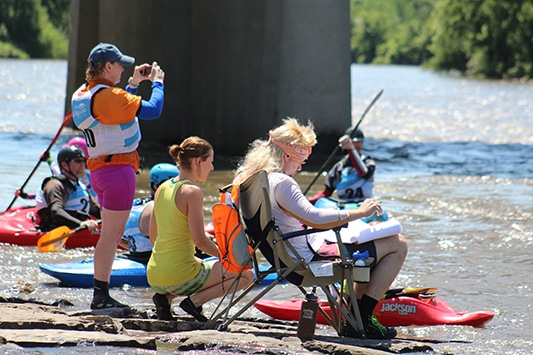 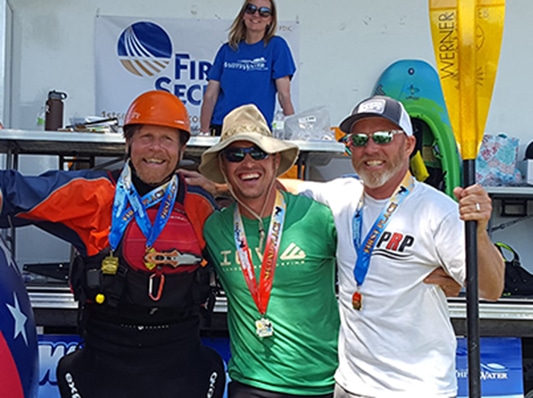 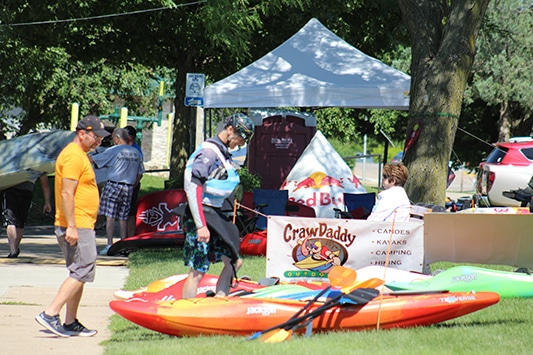 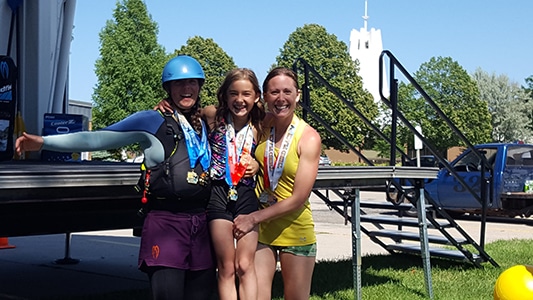 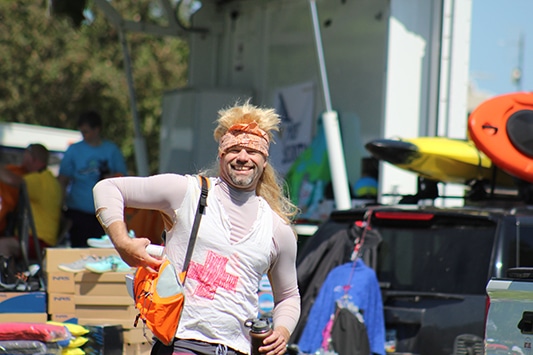