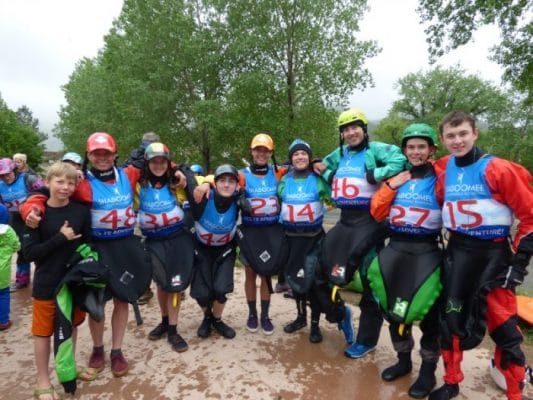 Every year I look forward to The Golden Games! And this year didn’t disappoint!

The Golden Games are always held the weekend before Memorial Day. The weekend is filled with every type of event from Slack Line to Whitewater Kayaking to Fishing and everything in between. The Golden Games have been voted as the best event 3 years in a row for the same reasons we go each and every year. 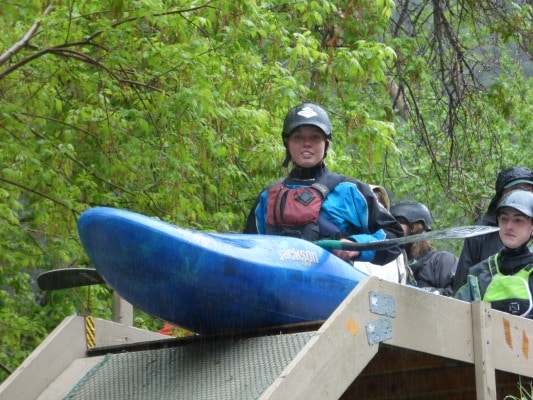 This year my family and I entered as many competitions possible, so our days at The Golden Games were filled with so much fun around great people! Super thankful for the Harcourts, especially T-roy for putting so many tireless hours working to make sure the GG go off without a hitch.

Thankful for Kokatat gear as well for keeping us all dry and warm, for the water on Clear Creek is freezing and straight snow melt. This year the weather wasn’t prime, it was cold and rainy during the Screaming 1/4 Mile Creek Race. But in return it might have made me paddle faster so I could get warmed up. I finished in 2nd place behind Emily Jackson! Kenny placed 3rd in the Men’s Short Boat with Nick Troutman and Riley Frank not far ahead of him. 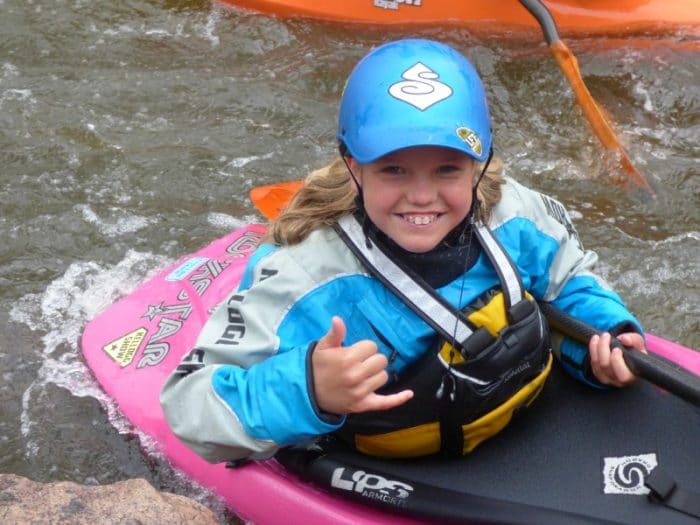 Dally was stoked with his 8th place finish behind Henry Hyde. And our friend and Little Shredder, Jacob came in at 11th, just ahead of fellow Little Shredder, Mason Hargrove who placed 17th.

I was really impressed and excited to watch these young guns go hard and sport the biggest smiles despite the really cold weather!

But even more so, I was super impressed with Maddy, Rowdy and Cardy for going all out in their first creek race and trying their best! I think their favorite part was the ramp into the water. You catch a ton of air which make it so much fun! 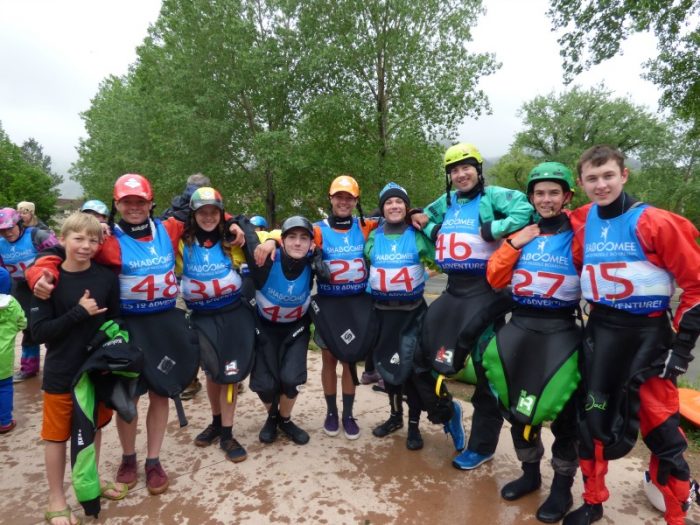 On the same day of the creek race we then had freestyle kayaking, not too tired we all had great rides, in a really difficult feature. Emmy competing in her first competition ever managed to put 15 points on the board! So proud of her! It lit her on fire, she now wants to learn a loop!

Rowdy was so excited when he took first place in the Cadets, beating Maddy who came in second right behind him! It’s fun to watch them, because they root for each other and even though they want to win, they are super excited for whoever gets first!

Like I said, the whitewater feature on clear creek is a challenge for sure. It’s very shallow and hard to stick your tricks, so when I see all these young kids out there throwing down it amazes me! 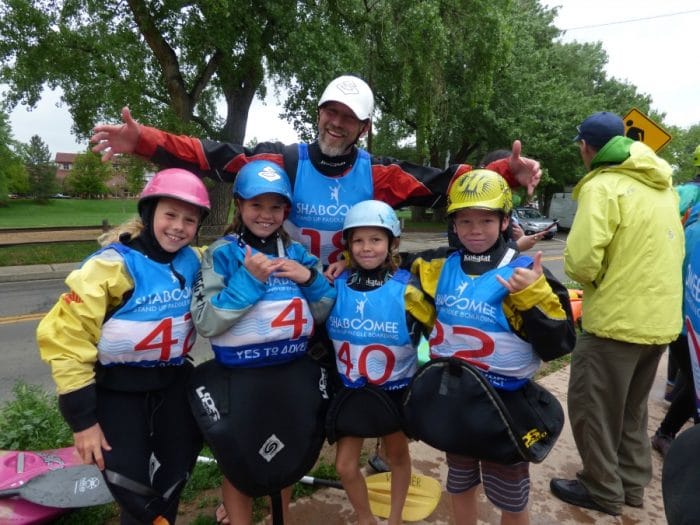 This year Kenny and Dally battled it out for first place in the Jr. Mens. Dally was ahead after the first ride in finals, but by the final rides, Kenny got to take a victory ride, sitting in first with 740 points , just ahead of Dally with 710. How they threw rides that big in that feature, I have no idea.

In pro women, Emily Jackson, Courtney Kerin and I battled it out for the top three placings. I spent a lot of time upside down and getting brain freezes but managed to pull off a second place!

My dad even got into the fun, competing in the men’s division. My dad placed 4th after a tie-breaker. He was pretty psyched. 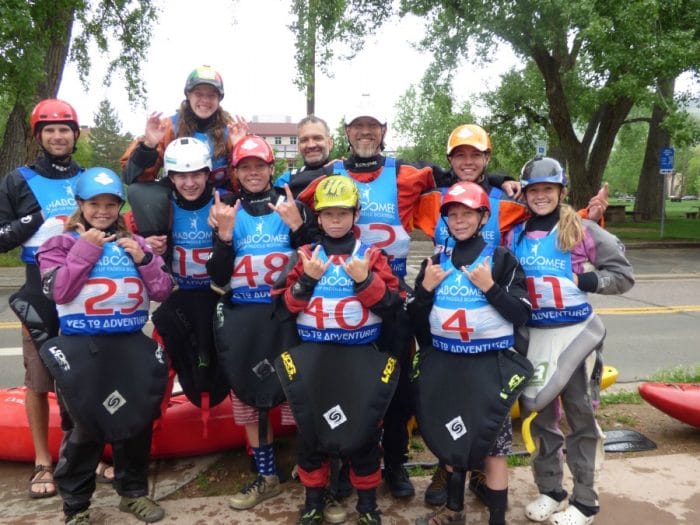 The next day was a busy one for the boys! Boater Cross, SUP Cross and the Safety Relay Race. Kenny placed 1st in the stacked Boater Cross ahead of Greg Parker , who got 2nd and Dally who placed 3rd!

Kenny also killed it in the SUP Cross and finished in 3rd place on a Shaboomee SUP! 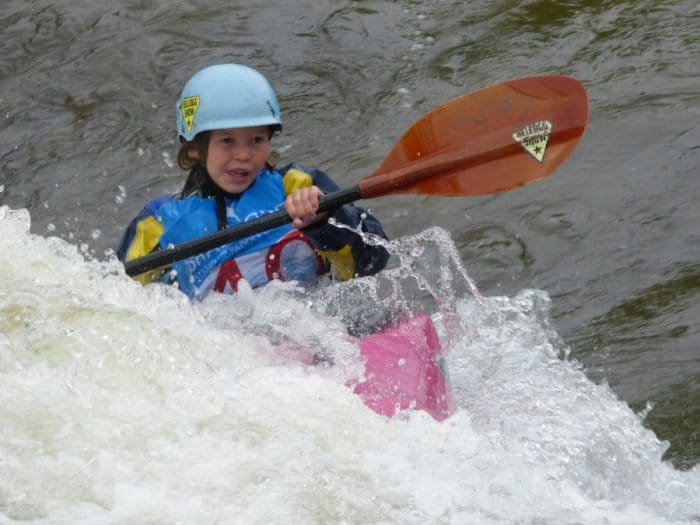 The Relay Race is one of my favorites! I think every event should have a similar competition. It’s all about swift water rescue and who can perform a rescue the fastest. So not only are you racing to win but also improving your skills and learning how to rescue a pinded boat or a drowning victim! These are extremely important skills everyone should have!

It was great to have Maddy and Rowdy participating because up until recently they are the ones being rescued and now that our youngest siblings are getting on the water, it’s time for them to start learning rescues.

Along with all the great people and events at The Golden Games they have some of the best prizes! Helmets, skirts, jackets, gift certificates and so much more! This year I won 40% off Astral footwear and a new hoodie! Not to mention the after party is so much fun! Live music and all your favorite people around enjoying beers and each others company. Thank you again to the Harcourts, volunteers and sponsors! Can’t wait for next year! Mark your calendars you don’t wanna miss it!