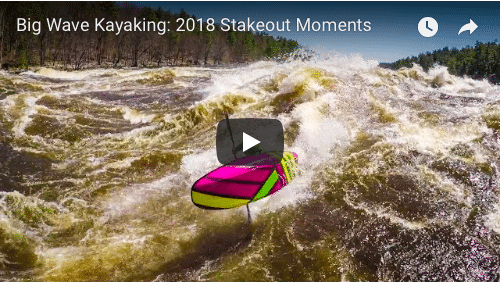 Stakeout is the annual migration of paddlers to Eastern Canada’s large rivers and big waves brought on by the seasonal spring melt. It is an amazing time of year as the local kayak community is ecstatic to get back out on the water after a long winter hiatus, as well as the fact that paddlers travel from all over the word to take part in surfing these giant river waves, which may only rise for these couple days a year as the rivers meet their yearly peak flows.

This year I almost didn’t even attend this core gathering, as my schedule has been tight, and a late spring weather wasn’t very promising for the river levels. Though when I got the call from my best friend, Joel Kowalski, stating that Ruins and Gladiator (my two favorite waves) were going to come in, I knew I couldn’t miss it. So I bought a last minute flight, and boarded a plane the next day heading to Ottawa.

I was only able to fly in for a couple days, so we got right to it. Joel picked me up from the airport and we drove straight to the ‘Ruins’ wave in downtown Ottawa. It was clear that the word got out, as the parking lot was full, and the eddy consisted of the ‘who’s who’ of big wave paddlers. The level was perfect, and I surfed until dark, which was exhausting but worth every second on that wave.

We ended up spending the night in Ottawa and got up early to get back to the wave. To my astonishment, the level was even better, a touch higher with a steep, green face, and perfect for combos moves. I got back into my groove of wave surfing, as started linking together some combos like: Airscrew/ Blunt, Flashback/ Airscrew, Panama/ Back Panama, and Panam/ Pistol Flip. It was such an epic day, I am pretty sure I was on the water surfing for over 10 hours.

The levels continued to flow in our favor, as we ventured back to Beachburg to check out the ‘Gladiator’ wave. Again we had perfect levels for Gladiator. The water levels were high, which made catching the wave harder and more intimidating as you had to fully commit to the center line. Though once you were on the wave it was incredible, as it is one of the biggest faces to surf, and launching you over the lip, giving up some of the biggest potential for airtime. We surfed all morning, grabbed a bite to eat and went back for more. Surfing Gladiator is definitely an exhausting mission, as you paddle out through the biggest rapid on the Ottawa, attempt to catch a massive intimidating wave, followed by a huge runout and crazy scary 60ft wide ledge hole. You then paddle back up, hike up the length of the rapid, and do it all over again. By the evening, there were only a few committed enough to keep at it. Though even us few, had to eventually call it quits, as the sunset started to blind us on the wave, and we could all barely make it back to shore.

After the water continued to rise, we were forced to continue on, and headed to the Gatineau River to get the final day on surfing ‘High Tension’ wave, being it too was flushed out with the continual high water. Phil Sheppard, Katie Kowalski, and myself headed out to Quebec, and got another great day of paddling in. The wave was much more “chill” compared to the previous couple days, but was a great change of pace. The wave was smooth and fun. I had a blast as I surfed along side some river boarders, as we “wave battled’ throwing trick after trick.

After water levels got too high for all the local Ottawa Valley big waves, we decided to go exploring and ventured to the head waters of the Ottawa River in search for more giants. We enjoyed some laughs, and fun time on our 5 hour road trip north. Though upon arrival we quickly realized we were a bit early, as all the bays, and lakes were still frozen, and the river was only a mere trickle in comparison to what we were expecting. We decided to take in our new found knowledge of the area with hopes that a new wave might be found later in the season once these waters had melted.

With only one day of paddling left, I wanted to make sure to get in as much as possible. We started off with a high water joy lap down the main channel of the Ottawa, launching kick flips galore. Joel and I then grabbed a bite and loaded up my bags and headed back to the city of Ottawa, with the idea that we would catch a quick session on the Champlain wave before dropping me off at the airport. The wave, which is usually a bit small, was ideal at these higher flows. You could throw every trick possible, and stay on the wave for as long as you wanted. Both Joel and I were blown away with the quality of the wave, and the few people in the eddies that made up our line up. It was the perfect end to an epic trip.

All in all, I got an incredible amount of surfing in, including two of my most favorite waves. I also got to visit friends, see me parents, and get a quick little exploratory mission in, all in less then a week. I can’t say I didn’t want to stay longer, but I can say it was totally with it, and time to head back to the west coast to see Emily and the kids and continue on my 2018 season tour.