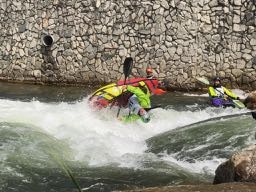 This past weekend was the ‘Live like Maria NOC Shootout’. It was another incredible weekend at NOC and the Nantahala River. This year the event was held in memory of the late Maria Noakes, who was a mother, paddler, local hero, and friend to many people and paddlers around the world. 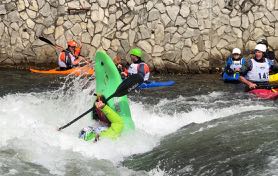 The weather on Saturday was a warm blue bird day as people from around the nation flocked to the NOC hole to take part and support the event. The cadet class had a strong showing as the young rippers were tearing up the hole and even the youngest competitors, 10 year old Makinley Kate, throwing huge air loops. The skill level of these youngster kept increasing as the Junior classes were landing the hardest of tricks and even linking together some combo moves. 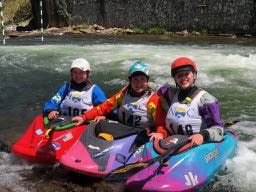 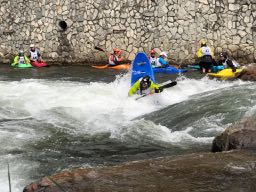 In the Men’s class I got to paddle alongside many new and old friends. I was stoked as I was able to put together some great rides, and complete some of my favorite combo tricks, like Space/ Loop, Backloop/ McNasty, and the Loop/ Lunar Orbit. In the end I was able to pull out on top, and share with podium with a couple great friends, Matt Anger in 2nd, and Peter Holcomb in 3rd. 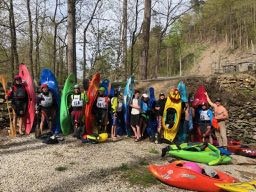 After the freestyle competition was the much anticipated, new/ old school, Galactic Slicey Boat Championships. It was the who’s who of slippery boats with a much a new and original old school designs. Paddlers threw down old school style with unlimited cartwheels, pirouettes, paddle twirls, and a hand full of split wheels and tricky woos sprinkled in. Brian Miller and Robbie Gilson were some of the highlights to watch as they both through down with some cool style and flair and Robbie mixed in many paddle twirls and pirouettes, and Brian threw flurries of clean cartwheel in his C-1. After the dust settled and the points were added up the final scores were close. Though the final tally was Jeremy Nash in 3rd, Brian Miller in 2nd, and I was lucky enough to pull out the Trickywoo linked to unlimited cartwheels and split wheels to take the win. 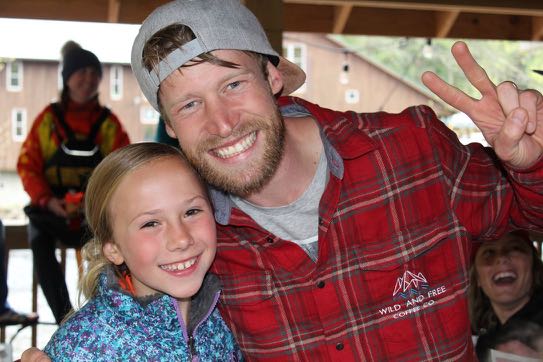 All in all, the weekend was amazing and a total success, with tons of fun, new and old friends, and lots of rad style for the crowds enjoyment.