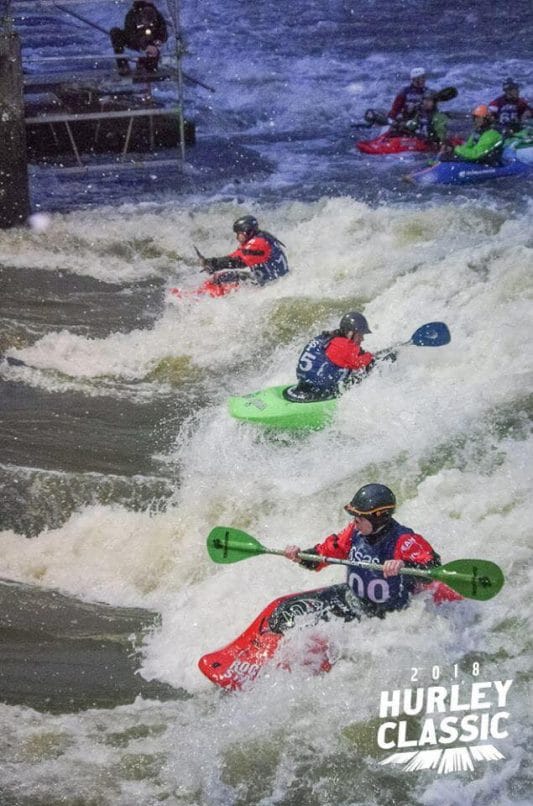 The Hurley classic is the number one freestyle event in the UK. Now in its 29th year, I have attended in previous years and it is great to see it grow year on year, more competitors and more competitions to take part in, with a wider draw. It now attracts competitors from across the globe, no longer just a local competition.

This year we had a change of date, usually held in November it was pushed to March due to conflicting events. The hope was that we would get more reliable water levels and warmer weather.

We certainly had fantastic water levels, a wonderful 3 gates. Just days before the event I paddled one evening as the sun was setting on a bright spring day… Then the blizzard hit! Much of the UK including Hurley was covered in snow, temperatures dropped from plus 13 to minus 3! My hair even froze whilst watching the finals.

But kayakers are a hardy bunch, the crowds still came and the event was on! Saturday was the paddle with the stars, a chance for the young up and coming kayakers to paddle with some of the biggest names in freestyle kayaking, including two current world champions!

This was followed by the Boater cross event (I crashed out early, but it was most definitely a lot of fun) and the team freestyle event. The team freestyle event was a particular highlight for me. I competed with Team Square Rock (the JK distributor in Europe) alongside fellow Jackson kayak team member and current junior world champion Ottie Robinson Shaw and Square Rock Team member Hugh Mandelstam.

The event saw around 50 people in the eddy, each team throwing down moves until one team member flushed. It was quick fire and before you knew it you’d be back in the feature again. It was made particularly special as it took place in the dark, under the flood lights and the snow was hammering down! We finished in third places after nailing a ride of airscrews, mcnastys and blunts. It is a great feeling knowing that you’ve thrown down a great move but to then see the smiles of your team mates as they’ve also nailed one is even better.

Sunday was the Hurley Classic main event. A series of Jam heats with a brutal cut down to the top 5 competitors, in both male and female. No separate junior or C1 categories here. If you’re a junior and get the points to put you in the top 5 then you’re in, if you’re competing in C1 and make the top 5 you’re in!

The jam format works great for the amount of competitors and the time frame of the event, the cut down to the finals leaves out many big name paddlers who just didn’t quite make it. But it makes for a hellevu show and hard fought competition ensued.

David McClure put in a great effort, really nailing some superb hole trick in the first gate. It was Quim Fontane and Rob Crowe that really went big, a close fought battle which saw Quim take home the title home.

The ladies event had every competitor competing in JK boats, an even playing field of big names. Nouria Newman really showed that she can switch disciplines and put on a great show. But it was Lowri Davies and Ottie Robinson Shaw who fought it out. With a score of 310 to 162.5 it was Ottie who claimed the title, being the first junior to do so in the history of the event. 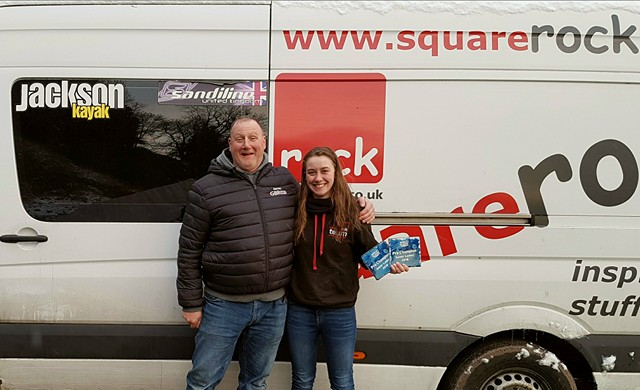 It cannot be underestimated how every athlete showed their grit and determination to compete. Freezing temperatures as well as the wind chill and the snow still coming down nobody complained and everybody had fun!

Next year will be the 30th anniversary of the original Hurley Classic, set to be the biggest and best one yet! Save the date and book your flights for the 16th & 17th March 2019. Hope to see you all there!