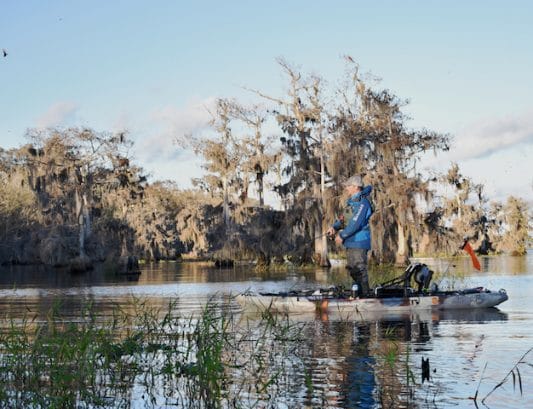 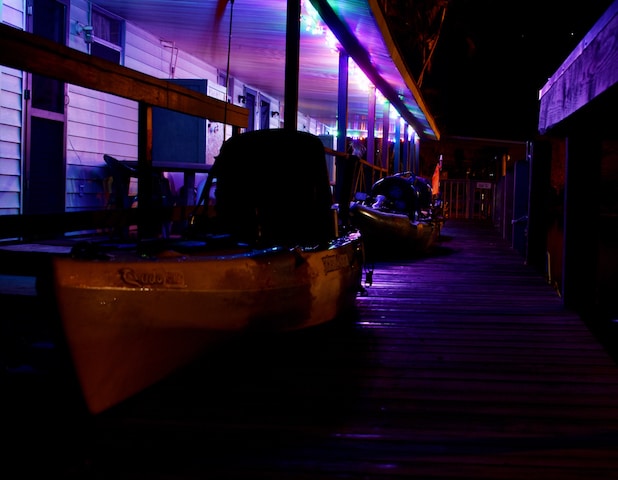 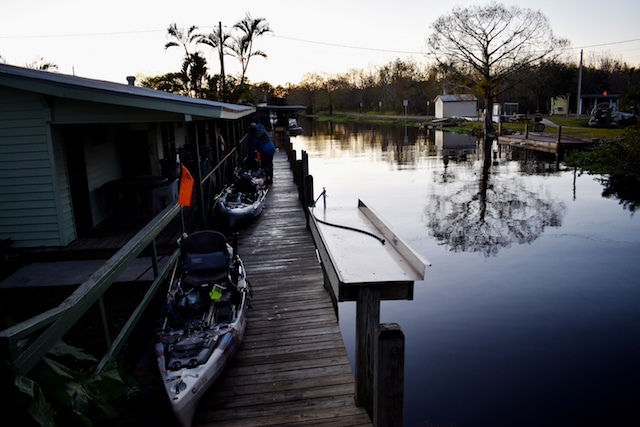 Standing on the wooden dock beside the canal leading to Blue Cypress lake, I wondered what the future held.  The St Johns River was now at our feet and the three of us would be calling it home for the next 310 miles.  The morning sun was starting to shine on the three Jackson Kayaks that had been strategically placed outside our room the night before.  We drove down from Bart’s hunting cabin in the Ocala National Forest on January 3rd in preparation for our early departure the next morning.  We had, what we naively considered, a short 15-mile day ahead. 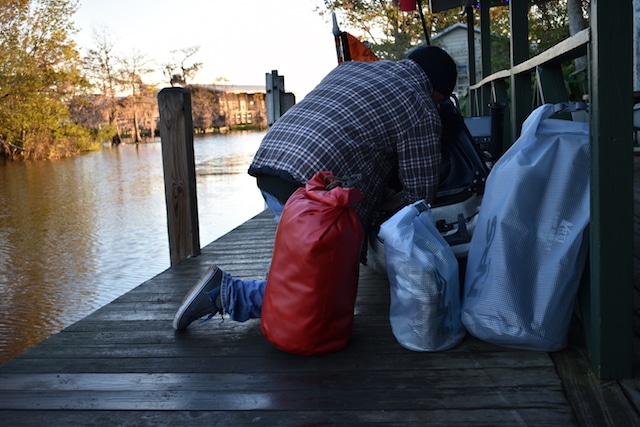 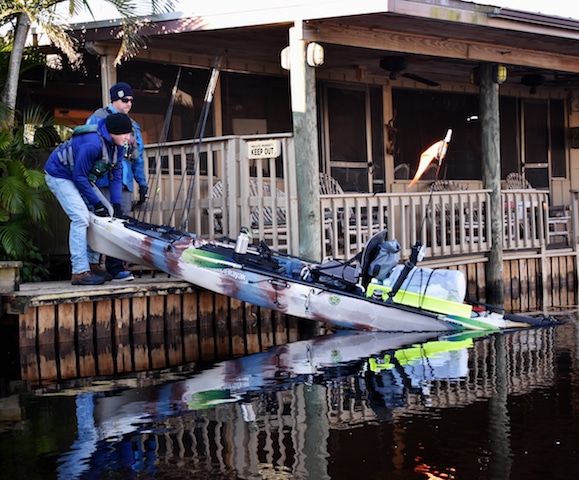 As we departed the canal heading north searching for the exit on the far side of Blue Cypress.  We could feel the bitter north winds for the first time.  The intense cold front that had crippled north Florida was just now reaching the central part of the state.  We later learned it was the worst in 6-years and responsible for a large fish kill, which we would become very familiar with over the next few weeks. 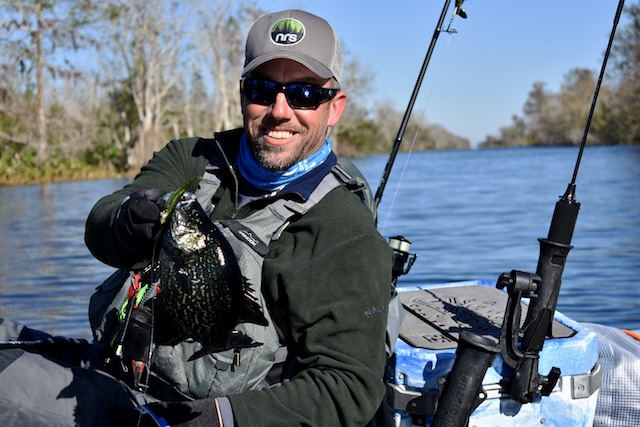 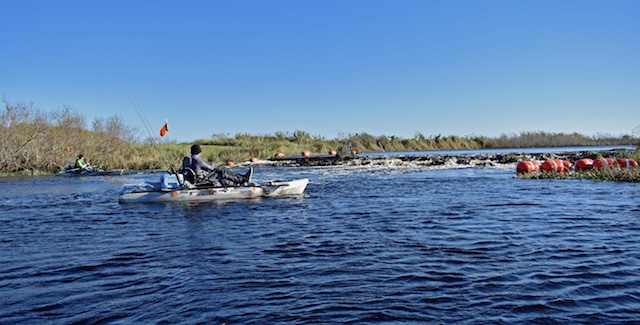 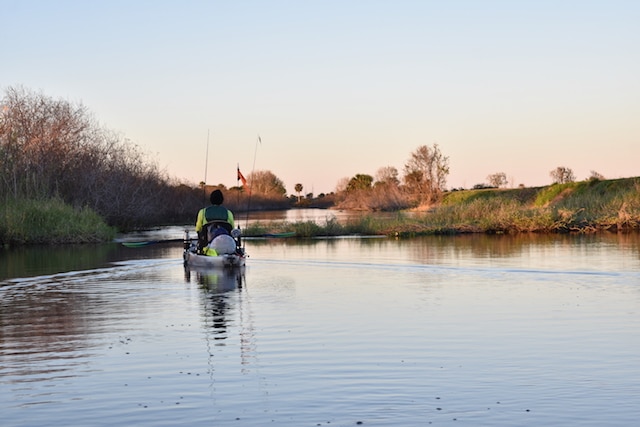 As we entered the canal, the roar of an approaching airboat greeted us to the Upper St Johns River.   We were warned to make ourselves visible on this section of the river as the airboats can and will go anywhere.  They don’t require much water to navigate and aren’t expecting to see anyone else, especially not a kayak.   That fact was later proven while talking to a guy portaging an airboat crossing.  His words reminded us to stay aware of our surroundings.  “You guys are on your own out here.”  Inwardly, I was excited about that, it was the reason I was here. 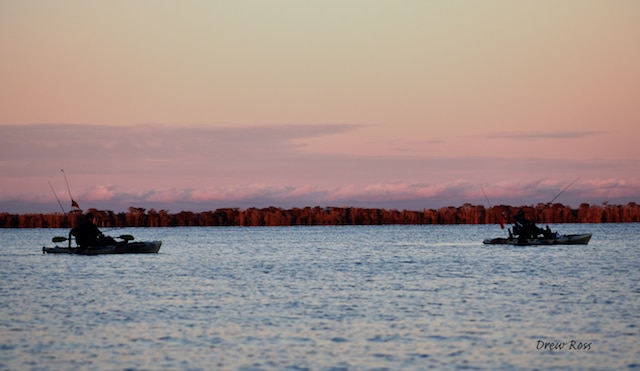 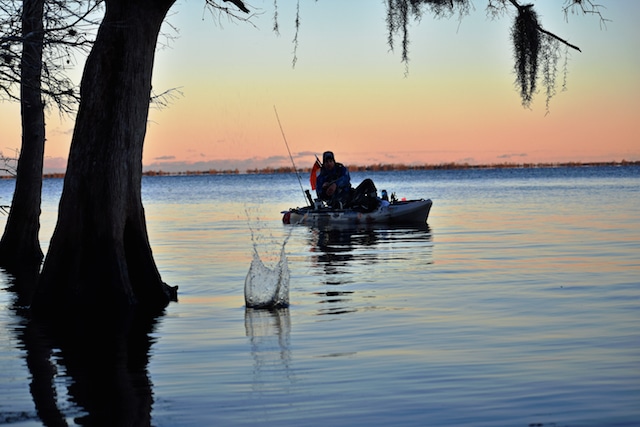 Bordered on the east side by flooded swamp and an elevated levee on the west side, the St Johns didn’t provide much in the way of great camping locations.  Because of this, Bart and Ben had spent weeks planning the nightly stops.  It was after the second portage that we noticed how far off schedule we were.  The sun was setting and we were still 2-miles away from the first proposed camping location.  Knowing we weren’t going to make it, we discussed the idea of locating a suitable spot to camp.  An airboat crossing wasn’t our first choice but it was the best choice at the moment.  We left lights hanging from the kayaks and our tents to mark our location to any airboaters that might use the crossing while we slept. 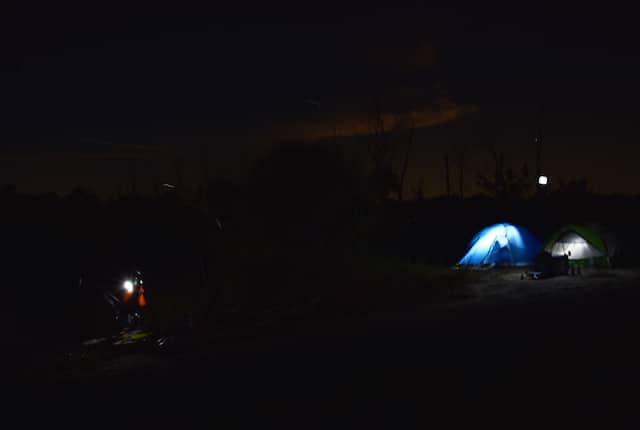 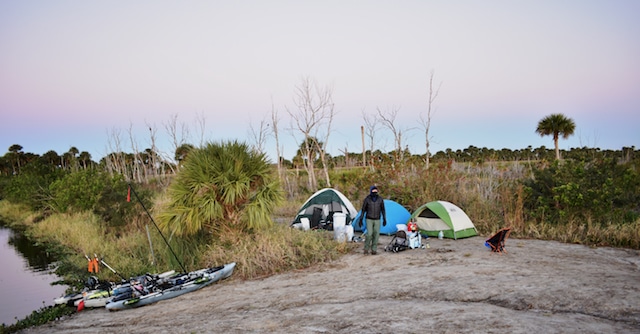 We unzipped our frost covered tents in anticipation of our second day off the grid.  The night had been a cold one but the morning sun was warming our skin and lifting our spirits.  We quickly loaded the kayaks and set off for a shelter in Little Sawgrass Lake, 16 miles away.  We knew there would be little to no dry ground to make camp, so making the shelter was priority number one.  Fishing was a close second, especially with lakes named “Hell-n-Blazes” in our path.  However, those north winds would again demand our attention.  The St Johns historically flows to the North, but it appeared to be flowing South today. We decided to push hard and make it to the shelter. 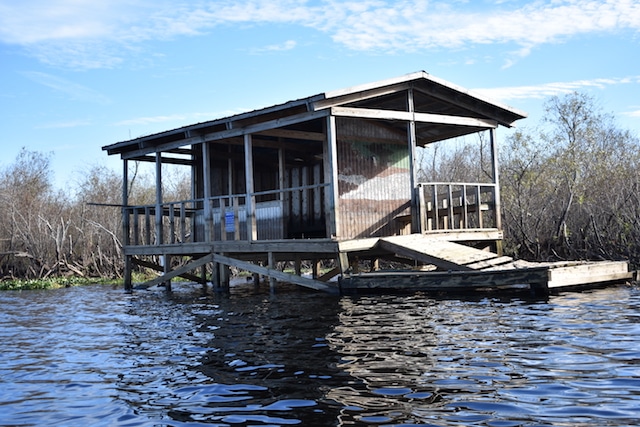 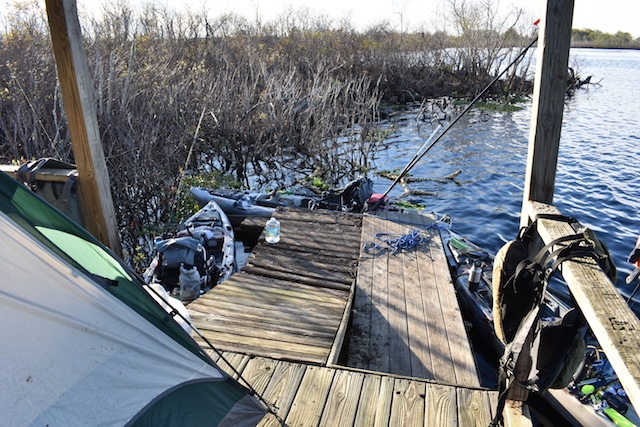 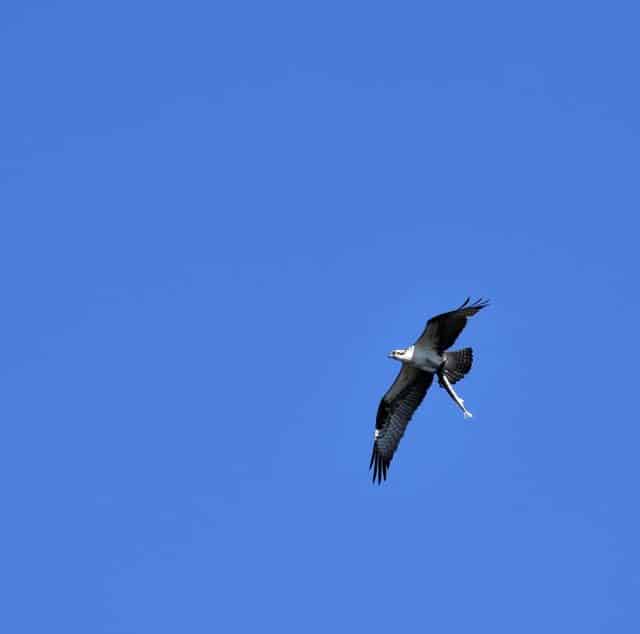 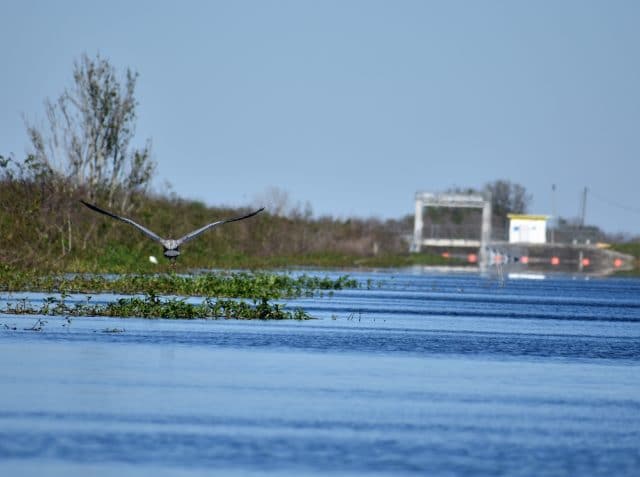 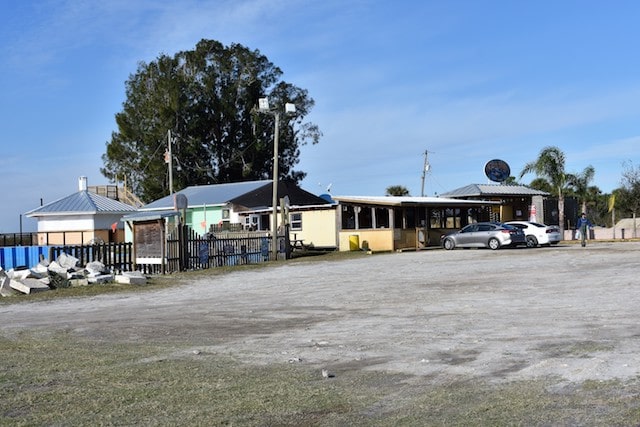 It was just as we expected, no dry ground anywhere in sight.  It would again be a subfreezing night with no possibility of a fire.  There wasn’t any place to make one and we would never find dry wood anyway.  We set up tents and fished out the day.  The sunset was exceptional.  It recharged our cold drained bodies and left us feeling rejuvenated.  It was an odd feeling to have at the end of a long journey.  But it had clearly impacted the group.  Everyone was positive and thankful to be in such a special place.  We had the view, the St Johns River and this day to ourselves.  Only the three souls in that shelter shared the experience.   It was our gift from the swamp. 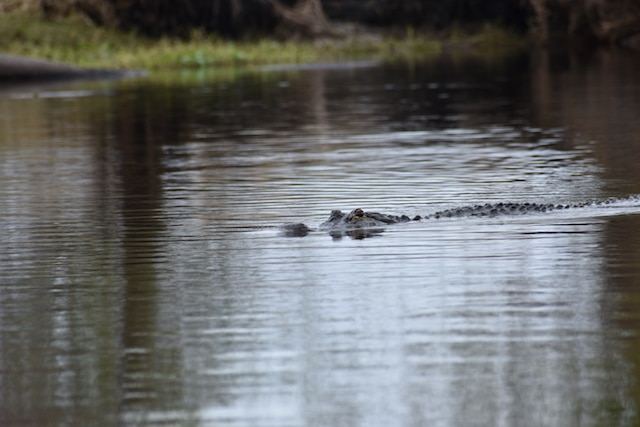 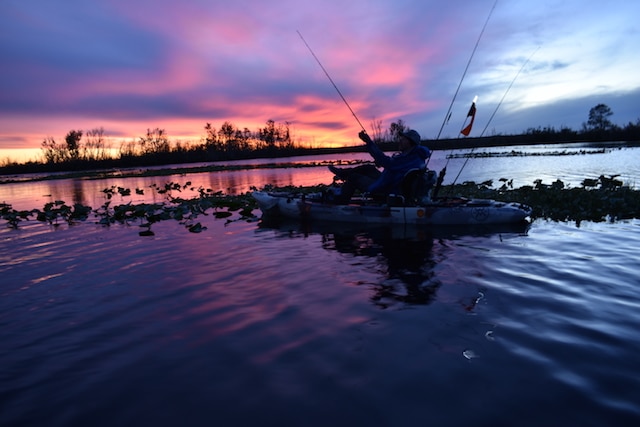 The next day we broke camp early and made our way to Camp Holly.  While picking up some supplies, one of the airboat drivers calmly said, “Lake Washington was going to be soupy.”  He said it in the most casual tone.  One you’d use to remind a friend of a certain speed trap.  I didn’t grasp the full meaning of that comment until I was looking across the lake an hour later.  That was a defining moment for the group and me particularly.  I had envisioned covering water in the river and fishing the lakes slowly.  Now I knew the lakes were going to be very challenging.  Lake Washington beat us down, then booted us out of its establishment.  It was so bad we coined the phrase #lakewashingtoneffect for every bad lake crossing during the trip and we had several.  Later that night, I looked at the map and noted the remaining lakes and how wide the river would get later in the trip.  The trip was quickly becoming an expedition. 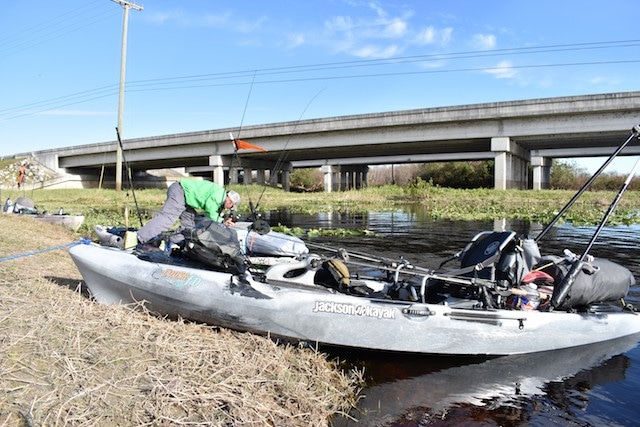 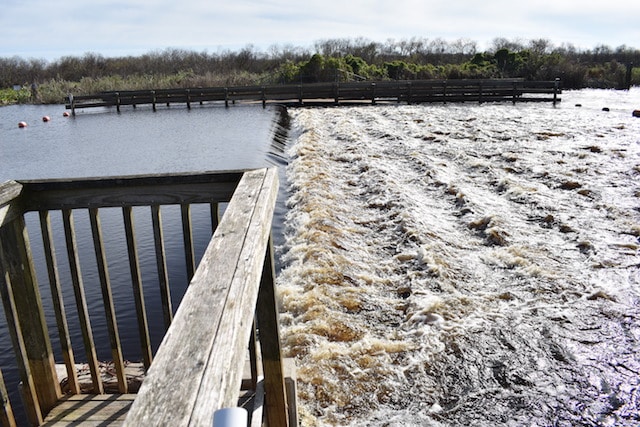 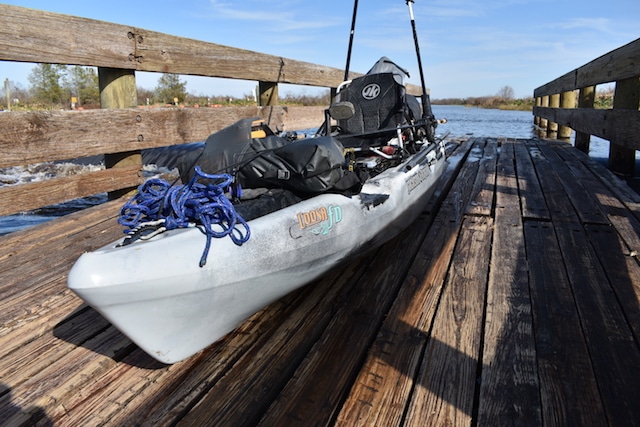 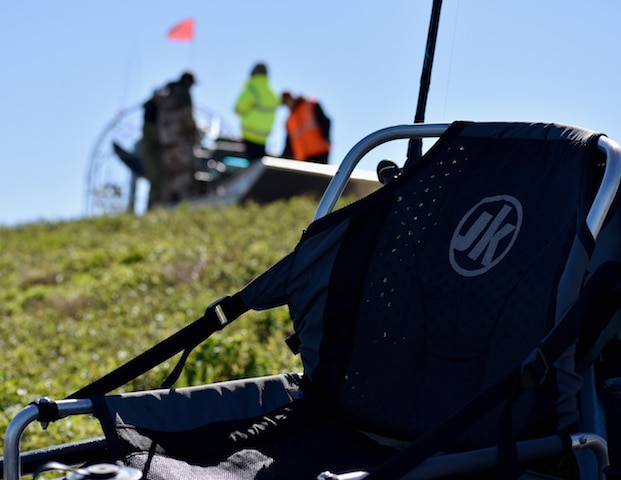 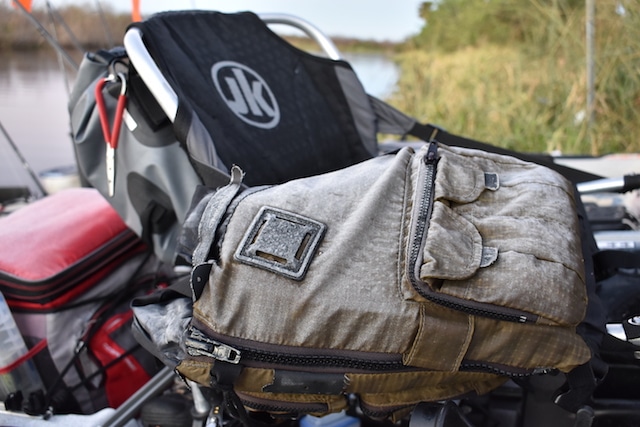 It was a look of exhaustion and disbelief that I saw on Bart’s face.  It had been a hard push across Lake Washington and no one was expecting another portage.  None the less, the river was impassible.  Thankfully, the airboat ramp on the far side was slick and had no slope.  Sometimes it’s the small things that lift you up when you just want to lay on the ground and take a nap.  Unable to meet the mileage, we searched for a camping spot along the river.  Delayed again, that’s how night number three ended. 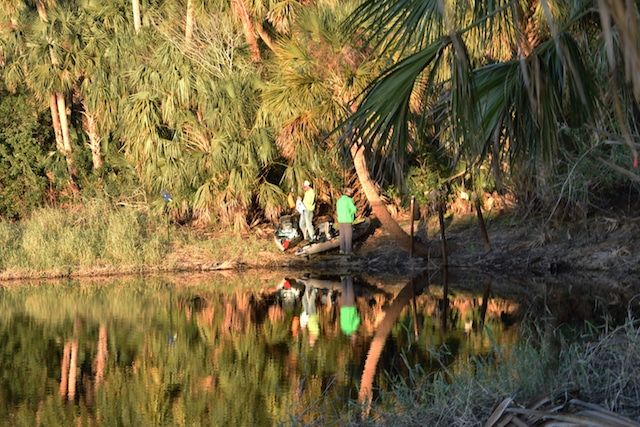