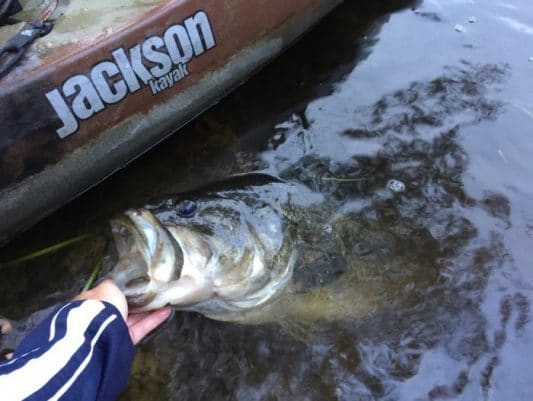 This month is the one year anniversary of that wondrous day back in 2017 when I met the bass of my dreams on a beautiful river. It seemed a fitting celebration to try to recreate the event with a trip back to the spot where we met. Uncannily, the weather conditions were almost identical. There was a similar line of storms approaching in the afternoon with its low pressure influences and also mild barefoot type temperatures. Wouldn’t it be incredible if she showed up again? My hopes were not high for that incredible outcome but it was worth a try!

I quietly paddled my Coosa HD right to the area where I caught her, staged the kayak downstream and casted up, using the same lure and presentation as last year. A big fish swirled at the sound of the soft plastic hitting the water. I held my breath. Would she pick it up? She did not. I threw again at a different angle then watched her massive wake leave the area. And with that, our anniversary celebration was over.

Catching that fifteen pound bass  last year was so memorable that every detail of the experience is still vivid in my mind.

It was a balmy afternoon in north Florida spent in my kayak, catching Suwannee and largemouth bass and enjoying the beauty of the late winter on the river. A nasty looking thunderstorm was approaching so I decided to make a few casts in a previously productive spot before calling it a day.  The area was about a two foot depth small clearing and depression just outside a little side creek where I had caught an eleven pound bass six weeks earlier.

I made one cast, buzzing a five inch paddletail on a 1/8 ounce weighted swimbait hook at the top pretty quickly, upstream into eel grass and clumps of wild rice, retrieving it downstream with the flow.

The giant bass exploded out of the water and on the lure so quickly and aggressively that I don’t even consciously remember setting the hook. She dove immediately down into the grass and when I felt the heft and strength of her body pull drag I knew she had to be a huge fish.

My heart was racing and I was holding my breath hoping that she did not escape. One of the common ways that I lose big bass is when they dive into the stalks of lily pads or, in this case, a stalk of wild rice. Keeping the line taut, I pulled myself over to the spot where I hoped she was still hooked. Until I saw the fish I was not even certain that it was a bass. It could have been a huge bowfin. As I cleared the grass and peered below I caught sight of a true monster river bass and my jaw dropped in amazement at her size! When I reached down and grabbed her jaw and brought her to the surface I was astounded by her immense head and body. She was just so huge all over and unlike anything I’d seen before. She was truly in a class of her own! 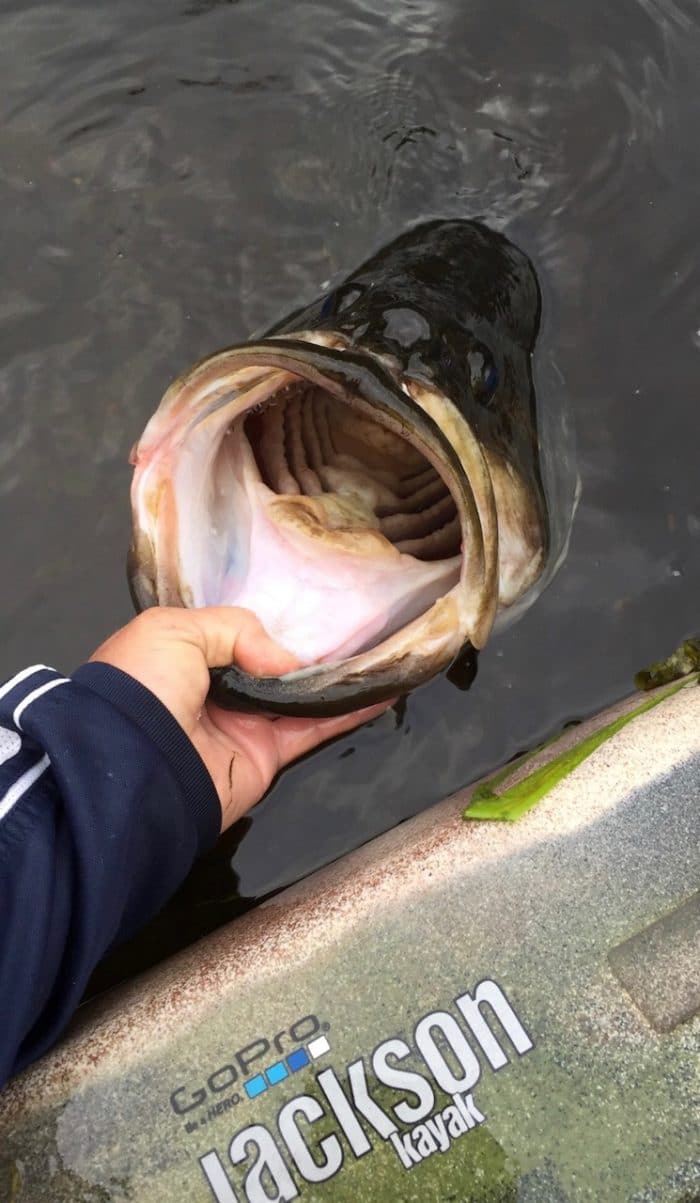 When I lifted her into the kayak and onto the hawg trough measuring board I had to prop up the plastic board with my feet to prevent it from breaking under her weight. My whole body was shaking with excitement as I quickly documented her length at 28 inches and girth at 22 inches.

In order to qualify for the catch and release TrophyCatch Florida records, a picture of the entire bass on a scale must be submitted. I had to stand in the Coosa HD, hold the giant bass on the scale with one hand and take a picture from above with my phone camera. I could barely hold her up since I was still shaking with excitement and from the strain of her weight. All the while I was in a hurry to get the proper pictures and get her back in the water and paddle back to the ramp before the violent storm approached. 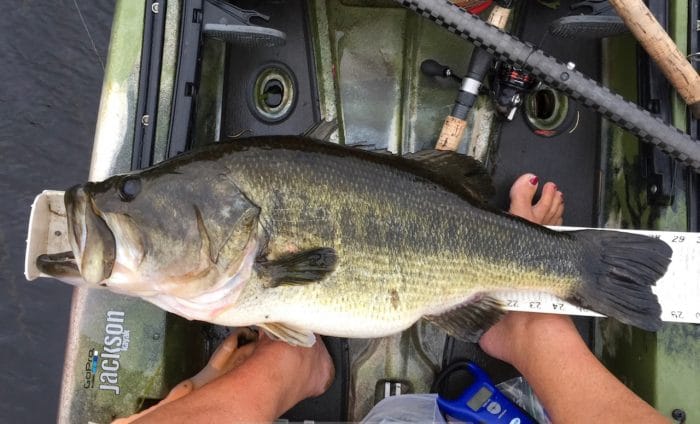 A fifteen pound river mama!  What a thrill! My personal best and far exceeding anything I could imagine!

With the critical pictures taken I released her back to her spring fed waters. She slipped quietly away into the safety and maze of the undulating eel grass. 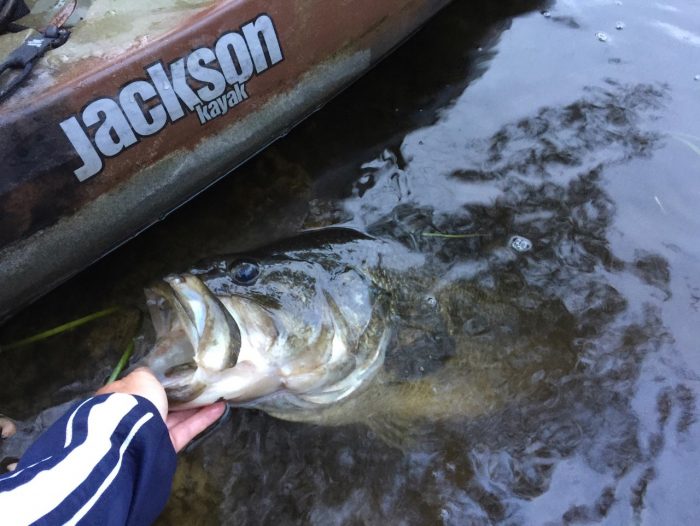 Thank you for the thrill, old gal!

Unfortunately, in the heat of the moment, it did not occur to me how to get a hero shot of myself with the bass. This is a skill I am working on!

Just recently I was honored for “my” 15 pound largemouth bass in TrophyCatch Florida’s Hall of Fame Ceremony where anglers who catch and release bass of at least 13 pounds are awarded fiberglass replica mounts of their catch. It is such a wonderful program that promotes the conservation of these amazing large bass.  I was the only kayak angler of the group and they made special note of that. But, I know that the kayak’s stealth and accessibility to remote places is a definite advantage when stalking these elusive fish. 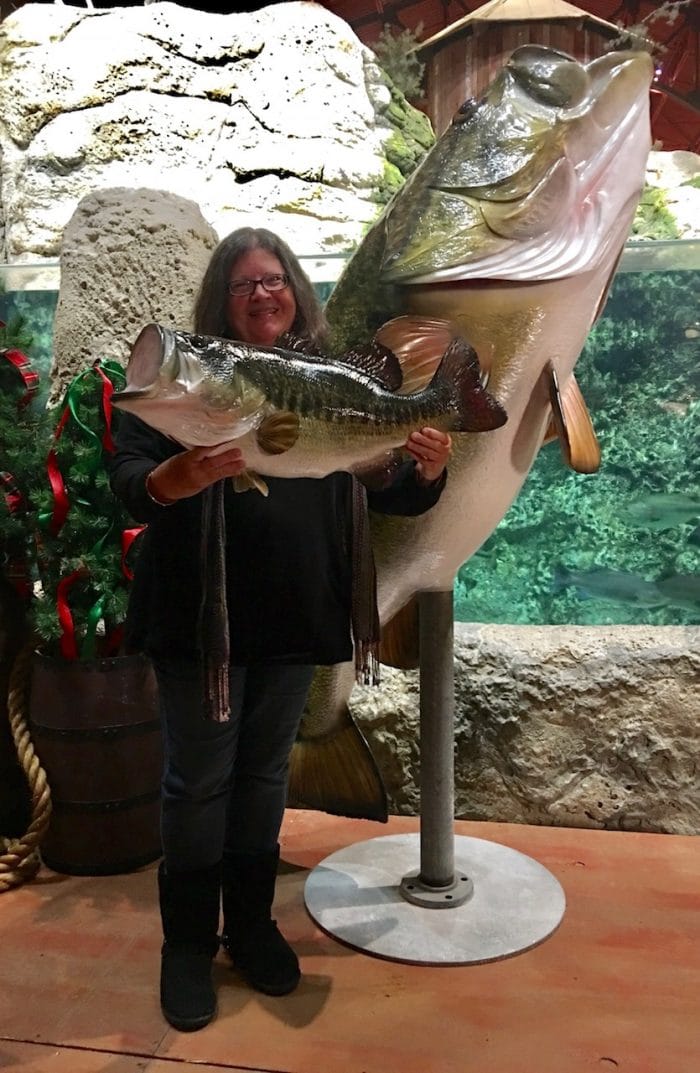 Now her likeness hangs on my wall along with driftwood, stones and other river treasures. But that magnificent largemouth river gal still plies the mysterious waters where she reigns supreme!