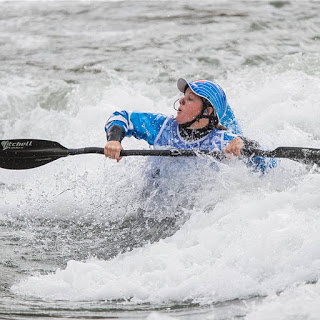 As I look at the open front of my kayak and see almost all the way through to the inside I can’t help but smile and laugh as I remember Jez and a few others that morning telling me before my runs ‘to go out there and smash it!’  I must remember in the future not to take it quite so literally! Especially when there is less than 6hrs between rounds.

It was also great news though as I did smash it and despite taking a huge chuck out of the front of my boat during the first 20 seconds of my first run. I also made it safely into the semi finals.

So quarter finals kicked off this morning at 9am. Sitting in 11th from prelims I knew I needed to improve but I wasn’t too worried as I knew I had so much more to give and the crazy stomach bug I had yesterday had now gone. Still tired but feeling stronger. I was excited to get back out on the water and lay down some runs. Same game plan as yesterday but more energy we started today with a kick around to try and loosen up my tight mussels from yesterday afternoon. It was alot cooler today which was nicer so it was easier to warm up properly with out over heating in the desert sun. Then it was time to go. Again it wasn’t about doing anything too fancy during my rides just getting enough tricks and points to get through to the next round.

So sure enough I went out to start with my base run, not really thinking about anything other than doing enough to make it through. My first run went pretty well despite crashing into the floor, I hadn’t noticed the slight drop in water levels. Luckily I had done this a million times in training so I just kept going and didn’t think about it too much. Paddling out of feature at the end of the run into the eddy to Den I asked him how it looked and he said with a smile something along the lines of ‘oh no worries it doesn’t look too bad at all. Don’t even think about it its cool’. As reassuring as this was I knew differently though as I had only fixed it a week earlier and I knew there was only 4 layers on there originally and which layer was which and I could see the entire top 3 layers had gone and the base layer was splintered apart. Turns out Den and Charlie had seen it happen and decided the best plan was to just play it totally cool. Actually a great coaching strategy but I was still a little bit concerned. I remember paddling up for my second run leaning back as I paddled up the eddy to make sure if the crack was fully through it didn’t fill before I even made the hole. It only had to last the 45seconds in the feature and it would be good but… my focus was gone and my second ride didn’t go so well.

Great news though the boat didn’t fill with water so the last layer was holding up well and luckily quarters is 3 rides 2 count. So I had one more go. I went into my last ride knowing I needed to score more points to make it through. I felt the pressure and loved it and nailed a much better run.

Results came in, I was through in 5th place to the semi finals. Top 10 go through. Islay was in 4th so we would get to paddle together in the next round which I always love to do.

So it was 11am in the middle of nowhere Argentina. Semi Finals started at 5pm and I had a badly broken boat. Luckily I have an amazing team of friends who have mad boat fixing skills. Literally as I stepped off the water Lewwy met me and grabbed my boat. ‘I’ve got a plan. Lets get this dried out.’ So Lewwy set about drying the boat and sent me to find resin. The gold dust of boat repairs at this event. Flying with resin is tricky so although we had loads of materials (carbon, kevlar, inegra) getting hold of resin out here was a lot trickier. I knew where to go so I ran out to the car park and found Matt Donnnelly. Sure enough he had spare resin back at his air bnb. So I jumped in the car and set off into to town. I grabbed the resin and on the way back to the feature grabbed some new headphones (I had also broken them during the squirt boating event and we all know how important good music is before a comp).

I arrived back to the feature and the boat was dry and lewwy was covered in sweat and fibre glass and was all ready well into sanding down my boat. As he sanded I found Guillaume and Stephen Wright and we worked out what the best layer options would be to make it super strong. Then a team of helpers arrived. Marc Richards and Lewwy sanded and sanded and sanded. Then as others passed by they all jumped in and had a go. It really was a demonstration of how amazing the kayaking community is.  Midway through we were joined by more broken boats the lower quarter finals levels taking its toll on the carbon boats. In the end we had a work shop set up and rallied through fixing everyone’s boat that had broken but had made it to the next round. By 3pm it was almost done and Lewwy told me to go home and rest out.

Can I say an absolutely massive thanks to Lewis, Marc, Matt and everyone who stepped in and helped this day. This was a huge rally and I couldn’t have competed that afternoon without you all.

When I got back to the feature at 5pm the boat was not only dry, but totally fixed. In fact it was the strongest it had been in weeks and was totally ready to go. The boat was ready. I was ready. This was beginning to feel more like a competition. I was stoked and set to go.

I jumped on for my rides. 2 rides. 1 counts and for the first time that week I paddled well. My first ride was good. It was better than any other ride I had done so far but it wasn’t enough. The judges were strict and my score was still low.

As I went in for the second run I knew that this was it. This was make or break. If I paddled really well I’d have a chance but if I blew it I was out. This was my last chance. The ride went awesome but i’m super critical. I wasn’t sure if a few of my tricks were perfect or a little off. Den was the same. He knew it was good but would it all score. The scores came in… kind off. The computers were having a few issues and the scores still showed me in 6th place with the same score but I knew I must have improved on my previous score but was it enough? I was sat there watching all the rest of the girls go not knowing if I was in 6th place and just missing the cut or if I was in the top 5. Ride after ride the girls did awesome but they were all already through from their first runs. The advantage of finishing high in early rounds is you then go in reverse order so you get to know if you’ve made it and or the score to beat. Emily Jackson had had a bad day and was already out. I though I might be too.

Then the results came in but we couldn’t hear them everyone was saying congratulations to me but I wasn’t sure, neither was Den. Was I in 6th or had I made it through?

The womens Top 5 through to finals are…

I got off the water and heard the results for the first time, mid interview. I was through and in 1st place!!! My second run had put me at the top of the leader board. Wow!!! The perfect position for finals. I had done it. I had made the finals and with my best ride of the comp so far, almost double all my previous individual ride scores. I was so stoked and to know there was no way (literally) I could have done it without the help of all my friends was insane. Thank you.

In the heat of trying to repair my boat and two rounds in a day I didn’t have any idea of what else was happening on the water. Everything was just too much of a rush and too hectic. Luckily everything was captured online and you can still watch it now.

As well as Gav Barker from team GB rocking it out there with some huge ride scores. Gav having a score of 3,300+ during prelims and Rob hitting a 1,700+ point ride during semi finals putting him in second place behind Dane going into the top 5.

Here is a great write up from the days action

The action didn’t stop their though. Tomorrows finals would be a floodlit night finals and I still hadn’t hit a ride that was on form so as the day turned to night me, Rob, Jez and Den went back to the feature to get in another last training session. The place was empty but the vibe was awesome. The main lights magnifying the feature and then others lighting up the mountains in an aray of colors it was super cool.

I quickly acclimatized as did Hitomi and Rob and we had a super fun throw down session. I had a new run plan, a fun one with heaps of big tricks in it. I played with the separate parts but didn’t do full runs. I was just feeling it out. Jez watched on from the stands as Den coached me from the media island. It was really cool. Then about 10.45pm we called it a night. Time for some sleep tomorrow ‘very awesomely’ was finals day.