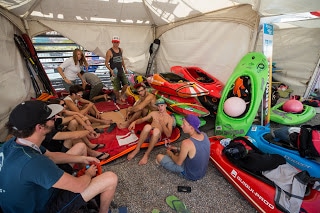 The sun shone bright as we woke up ready for another big day of action. This time it’s both me and Jez competing as its C1 and Women’s prelims day.

Jez leaves early as he has an announcing meeting before his prelims and I stay to try get a last few hours rest. The plan is set i’m going to join him half an hour before his runs and help him get ready and coach him through his comp. All is going well for an hour or so and then the dreaded San Juan stomach bug hits. This bug has been going round for a few weeks and has already taken Emily Jackson and Courtney Kerin out of action last week and earlier this week. They are now on the mend which is awesome but as the time draws closer to Jez’s prelims there is no way I can leave the house. About 20 minutes before i’m due to meet Jez hes messaging like mad. Where are you? Are you coming? Are you ok?

With just enough time to spare i’m through the worst of it and I jump in the car and rally to the feature. Jez is there ready and luckily has with him Australian team coach Josh aka ‘Singo’. The boys have big smiles and are excited to go. Jez looks nervous for sure but is as ready as he is going to be. The nerves mainly down to the lack of practice at the feature as he arrived so close to the start of the competition and has been working non stop since he landed. Massive thanks though to team Australia and NZ who gave him some extra time during the one training slot he did make.

I watch on as the other C1’s go and the standard is super high. Dane, Lucas, Sebastian and others all hitting over 1,000 points. It’s going to be a massive score to cut to the semi finals. Team GB’s Ibbo goes and hits some sweet rides 986 but i’m not sure it will be enough to make.

Then Jez is ready to go. Loving the music and excited by the crowd he gets himself pumped up and drops into the feature with a sweet entry move, he then sets up for a nice loop and cartwheel. Its after this that time in the feature shows and as he works his way around to try to get his Mcnasty and splits you can just see that the trickyness of ‘La Ola’ is taking his toll. His second ride is much of the same a sweet start and then he just can’t quite get his bigger tricks to go. He celebrates with a fist pump to the sky and the crowd cheers. He might not make the cut but his following here at San Juan and online worldwide is huge. Which shows testament to how much he has put into the sport both as an athlete but even more so into developing the youth and ensuring there is a very strong , enthusiastic and talented band of young paddlers coming through. A little frustrated he realises that with a little more practice in the feature he could have done more but hindsight is a great thing and his priorities here this year have been a little different for sure (ICF committee, worlds head announcer, aussie team coach, chair of the aussie freestyle committee, instructor, full time riot police officer…) So with this in mind he jumps off the water celebrates with a whole heap of high fives and then jumps back on the microphone to continue his role as the lead voice and head of the announcing team. He will continue to play a huge part in every single ride through the rest of the worlds including every single final winning ride.

Jez’s rides done its time for me to re set and results are in he has finished 16th in the World. A pretty amazing result. Well done Jez.

Then its time for me to get ready for my freestyle rides. I’m first on in the first heat which is awesome. My favorite position going into prelims. I have done everything I can and all I have to do is just go out there and give it my best shot. Going first means having no idea what others are doing and no listening to the announcers or crowd. It’s just go out and do my thing. Other rounds I like other positions but this one this is perfect for me for prelims especially with it also being a mid day and not a super early start. I find Den and we start getting everything prepared. It not long until I go. I’m still not feeling 100% but am way better than an hour or so ago.

Today for the women it is a cut to quarter finals which means top 20 go through which is awesome but also means a little but of the pressure is off. Often we cut straight to semi finals (top 10) which is a lot more pressure and less room for error. I notice it as I try to get amped up my energies are super low but i’m totally ready and excited to get out there and throw down. My goal is to make the cut. Not to win but to make it through. I go out with a basic ride plan loop, mcnasty, mcnasty, space, split split… Jez pops down to wish me luck and Den gives me a big smile and high five and its time to go.

The atmosphere today is nice, we have a small crowd, the suns shinning and the musics pumping in the background. I look around take it all in and smile. I get the thumbs up from head judge Josh and drop in for my rides. It’s two runs both count so there is no margin for error. My first few tricks go ok. I have some points on the board which is awesome but wow my abs feel like jelly and I have no explosive power. Yey to the San Juan bug. Luckily though its plenty enough to get me through in 11th place to the next round.

Hitomi leads the prelims with some sweet 600+ point rides, closely followed by Emily Jackson and Marlene Devillez. Marlene setting the high score of the event so far with a 707 point ride. Its a great display with freestyle and although there are a couple of upsets most of the top paddlers make it through including all of the GB girls including our youngest senior paddler Heidi who puts down two awesome rides.

The heats finish early and i’m knackered so head straight home. Grab some amazing food from Jan and Chris’s house and then its bedtime. Tomorrow is another massive day. Quarters and if we make it through semi finals less than 6hrs apart.