Inside the World Championships with Claire O – Day 3 – Mens Prelims 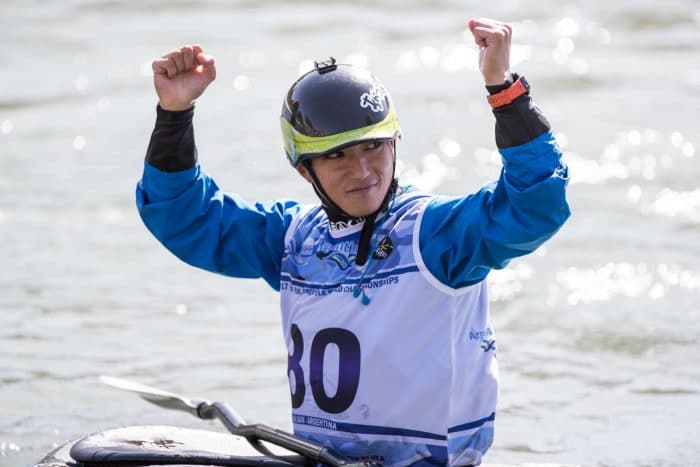 Today was the men’s prelims. The biggest of all the classes with over 6 and half hours of non stop freestyle. Still exhausted from the Squirt boating event today was my enforced rest day as my freestyle would kick off tomorrow and hopefully run for the next three days back to back. I did however struggle to stay away from the venue so in between rest breaks I spent a couple of hours helping out the announcing team and got to be on the coaches platform to support two amazing athletes. Josh Singleton (Australia) and then the awesome Dennis Newton (Team GB).

Dennis has been my coach for almost 8 years and is also my best friend. In this time though we have trained together all over the world. Not always but most of our session we paddle together as well as me being coached. Paddling together I coach Den, as Den coaches me, and this year he made the GB men’s team a really difficult feat. As everyone knows  Den is by far one of the best coaches in the world but what a lot of people don’t realise is he is also a phenomenal athlete So it was so exciting to be able to be there for him as he took his turn competing on the International world stage for the first time. We had an impressive plan and he went out an executed it really well just getting one unfortunate flush. Amidst all the crazyness of coaching the entire British team as well as managing to train and compete himself. Den finished 23rd in the World. Just missing the top 20 semi finals cut. A super proud moment in both of our lives.

American Dane Jackson has justified his red-hot favoritism for this week’s K1 event at the ICF Freestyle Kayak World Championships with a dominant display on the opening day of preliminaries at San Juan, Argentina.

23-year-old Jackson is chasing his third senior world title, and made it clear he means business with 3306.67 points from his two runs on Wednesday.

“I’m fired up, prelims is always an exciting and nervous round to see what you can do under pressure, so I’m fired up to have laid down two good rides,” Jackson said.

“I think definitely I’ll have a little bit of a target on the back of my head, but I’m just fired up that there is so many good people.

“So far I know some people have put down some rides I didn’t know they could put down, and a couple of the better people I know can get bigger scores. That’s what’s exciting about it.”

Great Britain’s Gavin Barker was the only other athlete to crack 3000 points, his 3033.33 putting him almost 300 points behind Jackson.

“I felt pretty confident, actually, I felt like I was well prepared and that I could do that ride, so it was good to do it,” Barker said.

“I think if I nail my big ride, I’ll definitely be in contention. There’s a few more big scoring moves I can fit in there.”

The Spaniard said he was working within himself in the preliminary round.

“I was a little bit conservative, because I know a mistake here is paying very high, so I just wanted to make sure I made it through to the next cut,” Fontane Maso said.

“I think some people think people at the top don’t feel the pressure, but we definitely feel it in our tummy before the start.”

The crowd favourite this weekend will be local athlete, Maximiliano Montoya, who led the competition early on Wednesday before eventually qualifying in ninth place.

“This is my area, this beautiful place, and it’s amazing to have the World Championships here,” Montoya said.

“Before I started the competition I felt very nervous.”

The 2017 World Championships continue on Thursday with preliminary rounds of the men’s canoe and the women’s K1.