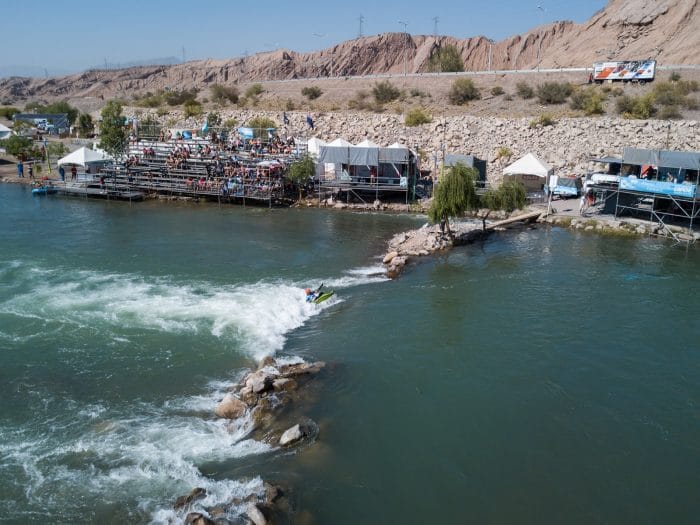 Waking up knowing I had just won another World Championships was an amazing feeling. As I opened the curtains and looked out over the lake the view was insane. The wind had settled and the lake shone bright blue and calm. I felt a mix of emotions excitement, relief and exhaustion.

Today was the start of the freestyle prelims. The juniors would take their turn to showcase their skills today in front of the cameras, crowd and judges. The way the week was laid out. From 9am until at least 6pm (if not 10pm) everyday every single minute of the day the freestyle feature had a designated a specific use. Every half hour slot was allocated either to the competition or as an official training slot for the athletes competing in the next round. Although this is kind of normally at this event it felt even more organized and structured this time and gave everyone an equal chance to get some quality practice in. The organizers had also structured everything around the heat, siestas, satellite connections from the live stream and getting the most spectators to the site.

So today the prelims kicked off at 10.30am with the junior girls closely followed by the junior men.

The work me and Jez do around the world teaching, coaching and mentoring young athletes meant that we knew a lot of the juniors involved in the event which meant today was super exciting. We know and work regularly with some of the top juniors which meant we had a great idea of who might make it through the rounds as well as working with the development of a lot of the other juniors where today’s event was all about learning for the future as well as trying to hit and beat personal bests.

In the junior girls there was a number of key names to watch out for who had put in the time over the last few years and it showed as there range of tricks was insane in this class. Young Sage Donnelly. Super talented 17 year old kayaker from the USA Sage is the defending World Champion having completely blown away the last worlds competition. Sage has gained so much competition experience at such a young age as she started early in the sport. Not only has she been freestyle kayaking competitively since she was 7 years old but she also extreme races as well as being a competitor on the US Slalom team and is a strong contender for the next Olympics. Then fresh and new to the World Championship competitions is British athlete Ottilie Robinson-Shaw. New to the Worlds scene she is already a known force to be reckoned with in the the UK and Europe. Ottilie represents the future of freestyle. Super strong, explosive and driven. Ottilie has trained so hard over the last 3 years coached by Den. Inspired by the talented pool of female kayakers in the UK and guided the whole way by Me and Den what she has always known as a normal standard of paddling or what is possible from her has always been so high her base level of what she can and should do has been beyond any girl her age before her.

Then not far behind is a crew of girls from the US, NZ and Europe who (most young 15/16) are already beyond the standard seen at any hole world championships before. The usual spin and loop routine now replaced by huge clean air loops, space godzillas both ways, split wheels, cartwheels and mcnastys. Impressive to say the least.

So the junior girls kicked of the freestyle prelims show with Sage taking the first spot with a sweet run containing both Mcnastys, Space Godzilla, splits and a loop closely followed by young Ottilie and then Lotte from New Zealand. I had the pleasure to coach a number of the girls alongside Den during their runs and saw the energy and enthusiasm of this next generation. All the girls making it through to the next round.

After the girls it was time for the boys and again the standard was ridiculous. So many of the lads so talented. The scores were not too far off those expected from the seniors in the event. As their event drew closer I found myself in one of the best seats at the venue in the announcing stand with Jez. Which was the perfect way to experience this class, one of the two voices of the competition adding the colour to the world wide broadcast production from the event.

The guys flew and it was hard to separate them. Luckily it was top ten that went through to the semi finals. Tom Dolle (France) nailed his super complex run to take the spot. Closely followed by Hayden Vorhees (USA) and then the talented team of Brits. Alex, Harry and Matt all throwing some sweet, fast super complex routines of tricks.

Today’s competition finished early one of the few times this will happen during the event so I maximized on the opportunity to take Jez into the city for a meal and catch up. We hit up a really nice crepe place in town before heading back for an early night and some well need rest.