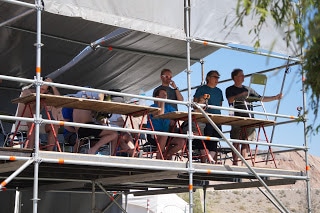 Things are beginning to take shape here in Argentina. After a few weeks of training in the middle of a desert on a feature surrounded by mostly dirt, gravel and dust it was hard to imagine that a major event was about to take place. But now stands are up, there’s spectator stadiums, judging platforms, coaching stands, media areas, VIP stands and loads and loads of big white tents. Its all completely changed. Food trucks are out selling awesomely selected foods such a fresh made cold smoothie, toasties and for many an eagerly awaited coffee truck. Boats and kit are everywhere, friendly faces from all over the world everywhere I look.

It’s awesome and then the crux World indicators that the event is soon to start ICF guru Terry Best and his team of World Class Judges have started to roll in. But there’s still two major faces missing Sneaky Pete (Head Judge from the previous 2 World Champs) and off course my hubby Jez.

Jez flys in Saturday night. Despite the fact that he is lead announcing the whole event and competition and helping on the ICF committee organise the whole thing. His work commitments back home have meant his is (I think) official going to be the last piece of the puzzle to arrive to complete the preparations for the event. I can’t wait to see him and show him around and help him prepare during his 1 training session for the World Champs.

Other key people missing this year are my Mum and Dad ad my Mum friends and my key support team (Laura, Angie, Mary, Carol) from the last 10 years of major events. These guys I know are watching me from home and will be cheering me on every step of the way and I know will come visit me in Sydney soon to share the excitement and stores from the event.

Luckily two key members of my personal Worlds teams are here Islay and Den. Den flew in last week and has been working with me daily helping me get ready for the event. Despite working with the whole GB team and competing himself he has been able to be there for me overtime I have needed him keeping my boating and mind on track. Islay has been with me on my major international competition adventures since 2008. A big smiley bundle of energy she helps keep me positive and grounded and also helps provide me with a playlist of awesome tunes at ever event. This morning we have been downloading like crazy making sure I have a good collection of tunes to see me through the event. Islay and Den are both competition at this event so i’m excited to share with them this journey and see what awesome rides we can all produce.

Training wise things have been going great I have been out here over three weeks now and really understand the dynamics of the freestyle feature and the squirt boating venue being used for the event. Training has been varied as i’ve been trying to juggle committing time to my base moves and routine whilst also playing with my newer bigger moves in case I need them during the event. In reality I would love to go out and just throw down my newer big moves as they are super fun but, thats a risky strategy as a mistake on these could lead to a flush and losing a lot of time at a stage in the competition where every second counts. So i’m going to be sensible and tactical and stick to my base routine during the early stages and then add in the big tricks where possible as the completion progresses. All this kicks of next Thursday from 2pm.

But before that on Monday opening up the whole event I have the Squirt Boating comp. So once again this year the squirt boating will be a one day competition right at the start of the event. It is an interesting squirt boating venue as its is quite shallow in many places and doesn’t really have a mystery seam in the main section of the event. With that in mind yesterday the ICF judging team arrived and decided to extend the venue slightly to include the two mystery seams downstream which is awesome. It will allow slightly more of a true squirt boating event to take place and will allow athletes even more options and variety to put into their routines.

They also included a slightly deeper eddy section which means I now have a choice of small areas just deep enough to perform my routine in. I already have a plan based on the old arena zone and my training last week and this close to the event won’t be changing my plan for prelims but I might play further downstream during the event. It’s a one day event kicking off at 9am and finishing at 8pm!!! Its going to be mental but awesome. It will be nice to get it out of the way but also tiring fitting 7 x 1 minute rides on a super challenging venue into the one day. I’ll then have two days off before my first freestyle comp.

So to maximize on my energy level and to make sure I am as fresh and explosive as possible for both events I have made the decision to take the 4 official team training days off. Most people might eb surprised at this but competing in two different disciplines I really need to be fresh so I am saving my energy ready for the massive Squirt Boating World Championships day and then i’ll have just enough time to re-energise again before the freestyle comp.

So training has been going awesome. The month in Nottingham training with Den has really paid off in getting me in shape and my tricks at their best prior to arriving. Then since I have been here I have had to adapt them a lot to suit the feature here. It is an awesome feature that allows everything to be thrown and at times super fast but its also not very forgiving. If you get it right its goes perfect and often massive. But if you throw in the wrong place or with your timing slightly off then you are quickly flushed out of the feature with only a limited chance of saving it and a long paddle back up. It is attainable which is awesome so unlike Garb at last worlds this time if you flush off the feature and have time you can sprint back up the eddy and take another shot if you still have time on the clock. But the standard up here is really high so you will ideally want to try and stay in the feature the whole time and keep scoring as 15 seconds in the eddy paddling back up scores 0 points and the rides are going to be massive so the trick is going to be to score high points and make sure you don’t mess up.

I have a plan which i’m excited with. Excuse moves precisely with perfection is going to be the trick. I’m excited I can’t wait to try and showcase what I can do and see where there puts me in the comp.

There are several ways you can follow and support me and all the other athletes during the event. The events team have already put online a live stream feed so you can watch everyone training over the next few days.

Then when the event kicks off you will be able to follow all the action live on the Olympic Channel. Announced by non other than our own Aussie superstar Jez.

If your not sure of what your watching check out my ‘This is Freestyle’ and ‘This is Squirt Boating videos’ and the ICF Canoe Freestyle Rules and Appendix which will give you all the info needed to have a good base idea on the main tricks to look out for during the event.

Also check out this cool article the ICF has done on me and the event.