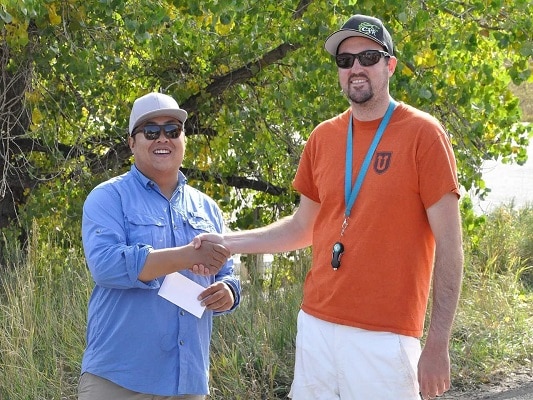 After Chatfield, the next tournament was to take place on Pueblo Reservoir. I was not able to attend this tournament which meant that this was going to be my lowest scoring and therefore dropped event for the year. This tournament was won by great stick, Michael Tamayo, who was having impressive showings at the tournaments and was a contender for angler of the year. The final event was to take place at Horsetooth Reservoir after quite a long break that felt like forever! The Angler of the Year race was super tight with several anglers in contention for the title, and it would all depend on how everyone finished at the final event for the year.

I was able to pre-fish Horsetooth a few times before the tournament starting in September. However, with the tournament being in October this proved to be a transition phase for the reservoir. Water temperatures and water levels were dropping quickly. The top water bite in September was on fire, but was fading more and more as October arrived. Horsetooth is also quite a large place to fish from a kayak so spot selection was going to be important come tournament day. Ultimately, I made the decision that I was going to launch out of Satanka Cove and stick to fishing the northern end of the reservoir. On the northern end of the reservoir I found a few spots that seemed to consistently produce some nice smallmouth on a crankbait and that was going to be my strategy for the tournament.

Tournament day came and I started out the morning by unloading my kayak at the Satanka Cove ramp. However, I received a text message from the tournament director informing me that portage was no longer allowed and all participants would be launching out of South Bay. I had not prepared for this, and my game plan was going to have to change quickly since I had not fished the southern half of the reservoir in weeks. I decided that instead of stressing out about the change, I would treat the day like any other and just go fishing.

The tournament started and I began to make my way down the eastern side of the reservoir looking for transitions along the bank. Whenever I would reach a transition point of mud to rock, I worked the area for a short time with a crankbait before moving on. I ended up covering a ton of water and moved about halfway up the reservoir when we were at the halfway point of the tournament. I then turned it around and fished the same bank on the way back, spending a little bit more time at my more productive spots. With this strategy I was able to put together a five fish limit of 73.5’’ of smallmouth. With the huge population of smaller bass in the reservoir, I was confident in a top five finish and was hoping it would be enough for the win.

The tournament came to an end and everyone started to share how their day went. As I talked to the other anglers, it sounded like most of them had a tough day. Although everyone was catching a lot of fish, it was harder for anglers to catch fish over 14”. I thought that I had clinched the victory, but didn’t want to get too ahead of myself as I did not hear the numbers from all of the other anglers. At the “weigh-in” my name was called for a second place finish. Finishing in first place was Michael Tamayo with a limit of fish totaling an impressive 83.25’’! Michael now had two tournament wins on the year and it was going to be a close finish for AOY.

After the weigh-in, the AOY results were announced. Finishing in third place was Paul Roth. Paul was consistent all year finishing in the top five in every tournament other than Horsetooth. Paul also had an impressive showing in the multi-species series and won AOY in that division. Michael Tamayo won second place with his two tournament wins and a sixth place finish at the Boyd tournament at the beginning of the season. Michael and Paul actually tied in AOY points with 295 total points, with the tie breaker going to Michael who turned in a few more total inches of fish for the year than Paul. I was then announced as the AOY with 296 total points. Coming in fourth place was Ron Southworth with 294 points. Ron won the Chatfield event and had two other top five finishes on the year. You can see how tight the race was when there was only a two point difference between first and fourth place!

Winning AOY opened up a few more opportunities for me as an angler, and I thank the Colorado Kayak Fishing Club for providing me with those opportunities. I am looking forward to the new season of kayak tournaments, and hope to participate in a few of the multi-species tournaments for the first time as well. I would also like to encourage all the kayak anglers in the state to check out the club tournaments. There have even been a few belly boaters competing in the past as well so the opportunity for anyone to join is there. The environment is welcoming to anglers of all skill levels and we’re all very willing to help each other out to improve our skills. Come out and join a few tournaments, and I look forward to seeing some new faces on the water this year!