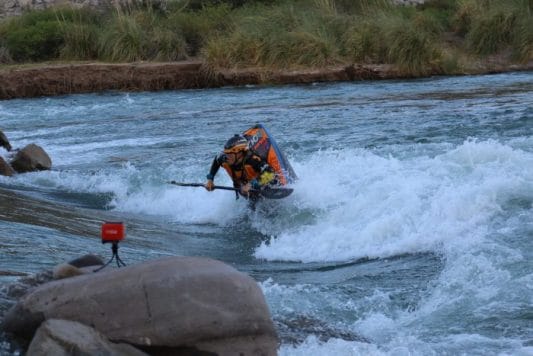 This past year has been dizzily busy and hectic, but it has been one of the most fun years to date! I started off in New Zealand and Australia for slalom training and a couple races, where I took first in K1 Jr. Women’s at Oceana Championships. I then flew home after being there for a month and a half, and went straight out to North Carolina with my mom in our van for my Jr. Slalom team trails in April. After, over a month of training, I took first in K1 and C1 Jr. women’s and had made 2018 Jr. team. I stuck around in Charlotte for another week and was able to participate in Tuck Fest where my coach had me run a 10 K and a 5 K for my first time. The 10 K went pretty well and I finished with an ok time (I wasn’t last!), but on the 5 K my blood sugar completely tanked and I had to walk most of it. It was frustrating, but I had boater cross and freestyle judging to focus on for the rest of the day! Boater cross was pretty interesting, I beat out my coach and a lot of slalom paddlers in the first round but in the second I took a beating from Fergus and Tren Long so I got knocked out from further festivities. Right after Tuck Fest, I flew straight to Reno to compete in my local river festival. It was a year to remember for Reno! We had record high flows and this year the competition was held on a wave due to the flows. I snagged a 2nd in Freestyle behind Emily and a first in boater cross before jumping on a plan and flying out to Oklahoma City for Senior Slalom Team Trials. I grabbed two more firsts for Senior Team and was really pumped to head to Colorado for more freestyle.

Once in Colorado, I juggles keeping up with my slalom training and freestyle training for world championships later in the year. It was intense and I messed up on a couple of my comps, but I found my rhythm again when I was at the GoPro Mountain Games and broke my wrist the day before the competition while loading boats. It was just diagnosed as a sprain after x-rays so I decided to paddled through the pain and do the steep creek race and freestyle. The creek race was awful and I had pretty limited power, but I felt a lot more safe and secure in my new Nirvana. The boat was forgiving and fast and helped me secure a third in the creek race. The pain for the day wasn’t over though, right after the creek race, I have freestyle prelims. I made it though all the way to finals and grabbed another third right behind tie breakers Adriene and Emily. We then went in for an MRI and discovered my wrist was broken, but luckily it was stable and I was given the go ahead to race and train with it in Europe.

The next day,  we were on a plane to Bratislava, Slovakia so I could start getting ready for my Jr. World Championships in a month. I had ten days to train before I flew home for 4 days to film with Rush Sturges, Jonny Mosley, and California Tourism for a segment of Jonny Moselye’s Wildest Dreams. Rush and I taught Jonny the ropes of kayaking and hucked some stouts ourselves. I then was right back on a plane to Europe for a few more weeks of training before Jr Worlds.

Jr. Slalom Worlds went very well for me, I made my first finals in K1 where I ended up 9th. I unfortunately messed up in C1, putting me in 16th in the world, but I knew I had it in me to do better so I wasn’t too bummed about it. I then drove around Europe competing in a few European Jr. Cups before flying to Ivrea, Italy. 2018 Jr. Worlds are held in Ivrea and there was a Senior World Cup a few weeks after I arrived. It was absolutely beautiful there and the course was amazing. I was able to work with an Italian paddler for the first week to learn the ropes of the course and I ended up placing 7th in prelims for C1 senior women. I then messed up semis, but seeing my potential and having an almost perfect run was an amazing feeling and i left Europe very happy.

As soon as I got home in mid September, it was time to get straight back into freestyle. The conditions for paddling back home were not ideal, but I made the most of it on a two foot wave two hours from my house. In between training, I managed to squeeze in one of my favorite local river festivals- Feather Fest. I was first in the Tobin Creek Race Short boat and had the top time overall in slalom (In my c1). Right after Feather Fest, I flew out to Argentina on October 14th to start getting ready for worlds on the amazing hole there. I improved my freestyle skills there drastically and learned how to backloop, link my tricks, and mcnasty all in 5 short weeks. I scored my best ride yet of a 620 in semis (the top score of junior women’s throughout the whole event), but sadly, woke up at 4 am the day of finals puking my guts out. I barely managed to stop throwing up right before finals started, but was too weak and shaky to land a lot of my moves straight enough resulting in a second place and a very disappointing score. I was pretty upset about my result, but I had to look back at all the improvements I had made in such little time and that I spend 8 weeks out of the year total doing freestyle this year. I am very excited to get ready for my first freestyle senior worlds in 2019 in Spain! Now it’s back home for 3 weeks before heading to Australia for winter training!