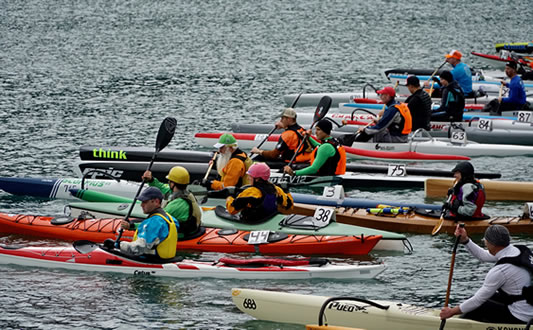 The Deception Pass Dash, an incredible competition hosted annually at Deception Pass State Park in Oak Harbor, Washington. Paddlers from all disciplines travel to the Pacific Northwest to compete in this 6+ mile tidal race in December. Kayaks, tandem kayaks, canoes, standup paddleboards, surf skis, outrigger canoes, and more were at the start line. 6+ miles does not seem very challenging when you frequently paddle 10+ or even 20+ miles, but there is more to the story.

The tidal race is very strong and requires strategic navigation. The advice I received prior to the race was to hit the gas pedal at the start of the race and arrive at the tidal race as quickly as possible. The longer I took to get to the tidal race, the more current I’d have to oppose. Honestly, I wasn’t too worried as I had done my fair share of attainments while river kayaking and paddled on a few tidal races in Scotland. Then, I started to see people strapping on helmets. Okay, maybe I need to reevaluate this a bit…

The 2017 Deception Pass Dash had a new sponsor joining this year, Red Bull. Outdoor Adventure Center is always the primary sponsor of the event, but hearing the name Red Bull come up at an event I was competing in made my palms a wee bit sweaty. But that must be for a different group of paddlers who would be racing separately than me. Right? This was just a sea kayaking race (for me) and sea kayaking races don’t get epic. Do they? 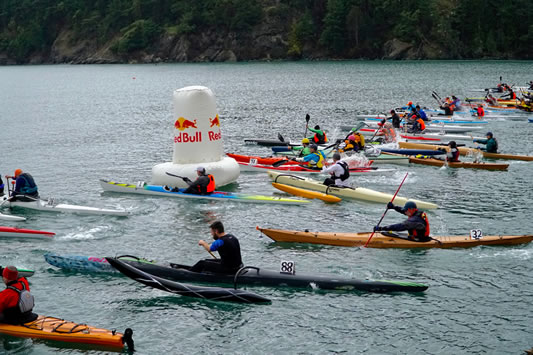 Everything about this race was epic. All of the racers lined up at the start line, including former Olympian Greg Barton. The scenery at the start line was gorgeous, with crystal clear water, cliffs covered in lush green forest, and a rainbow of paddle crafts. As the race started, the surf skis blazed in front of all of us and I found myself staring at the back of several PFDs. I did not expect such a sprint at the beginning! How bad could this tidal race be? …and how much energy would I need to make it through the pass? 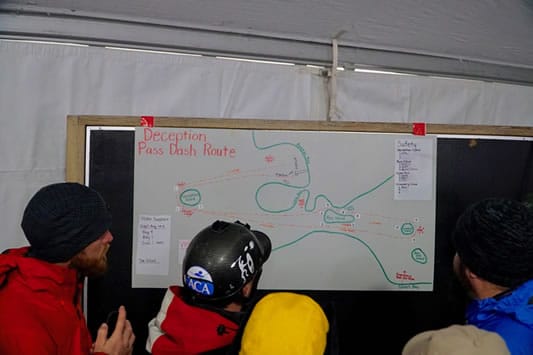 As we rounded the first reference point (Deception Island), the race transitioned from the protected waters of Bowman Bay to the open water conditions of Deception Pass. Game on! While rounding Deception Island, I had to balance avoiding the water crashing into the island’s rocky shores as well as find a path through the kelp beds. After I made it around, I began navigating toward the south end of Pass Island, the next reference point and site of the constriction forming the tidal race. I increased my pace and soon arrived at the tidal race (or so I thought).

I felt an increase in opposing current as I passed Lottie Bay on my port side. I began paddling aggressively and made it through with ease, having thought I had just made it through the tidal current. As I approached Pass Island, I began to realize that I had only experienced a fraction of the opposing current. I observed racers paddling aggressively toward the port side of the channel and I followed suit. With each paddle stroke I took, I could feel the opposing current getting stronger. I ferried as aggressively as I could before soon arriving at the shores of Pass Island. A group of us had met prior the race to share strategies. Most of us believed that we could make it through the tidal race by sticking close to Pass Island and using the eddies to make progress. This worked (for a little while). Once I arrived at the Eastern tip of Pass Island, I ferried from an eddy into the main current and paddled as hard as I could. I felt strong! All of those reps in the gym were truly paying off. And then I looked toward Pass Island… 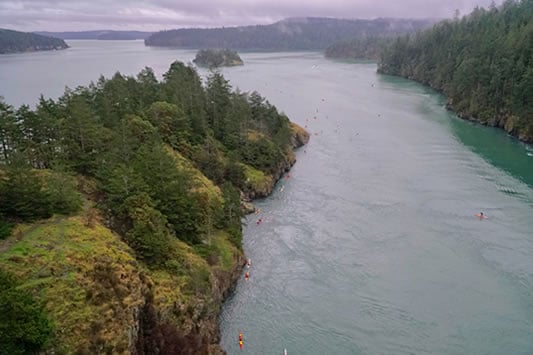 I was still in line with the eddy I just left a few minutes ago. Other racers were experiencing the same thing. It was as if we were paddling on a treadmill. I could barely maintain the pace I was using to attain the current and I soon became worried that I would not be able to complete the race. My strategy had failed and the current would only continue to get stronger as time passed. I made a decision. I altered my course and ferried to the opposite side of the channel, losing a lot of the progress I had made. As soon as I made it to the other side, I stopped in an eddy and gasped for breath. I was exhausted. I again tried the same strategy, to utilize eddies to complete the attainment. Each eddy attainment was tiring, as some moves would be successful while others sent be drifting backwards to try again. But I made it through and continued on with the race. 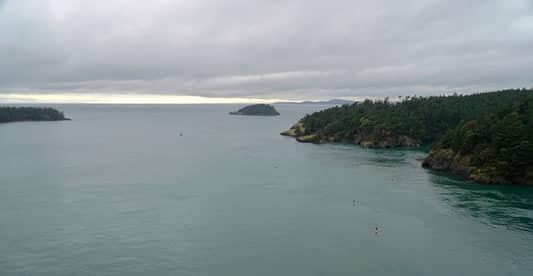 I had one more major traverse remaining, circumnavigating the East side of Strawberry Island. I would have to again ferry into the main current and paddle as hard as I could to get into an eddy formed by Strawberry Island. Most of the racers were taking the long way, paddling toward Ben Ure Island and then crossing over to Strawberry Island. I decided to take a risk, start the ferry sooner, and hope there was a good eddy behind the island. My strategy paid off and I found myself ahead of several of the racers, but I had lost a lot of time in the tidal race.

After rounding Strawberry Island, the current was in my favor. I did not have a whole lot of energy remaining, so I did my best to maintain a steady pace. Before I knew it, I was zooming by Pass Island and working my way toward Deception Island again. Next to Pass Island, I could see many kayakers who had not been able to traverse the tidal current. 50% of the sea kayak division DNF’d. This was truly a challenging race.

As I rounded Deception Island, I began to see the finish line. There was one tricky part remaining in the race course. The current that was so helpful for my return trip would now be trying to navigate me away from the finish line and into the opposite side of Bowman Bay. I set an aggressive angle and sprinted toward the finish line. As I crossed the finish line, I felt like I had accomplished something special. This race took me 1.5 hours to complete and I finished 5th in the sea kayak division. 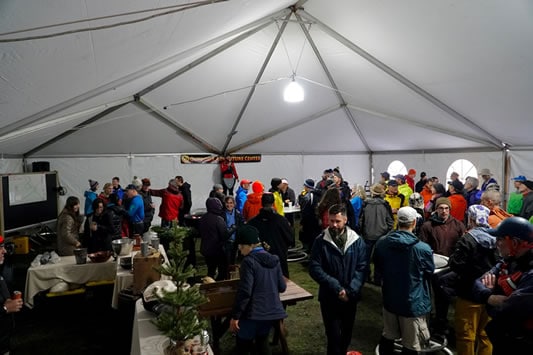 Following the race, we all gathered under the giant event tent, shared stories, and indulged in plates full of homemade BBQ brisket. The awards were announced and incredible prizes were raffled off. At the end of the evening, I was thankful for events like this being hosted for us to all come together, interact with nature, and accomplish something special in a paddlecraft. I definitely plan on returning for the 2018 Deception Pass Dash. Come and join me.