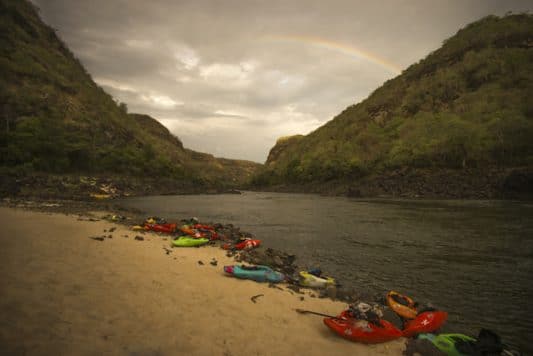 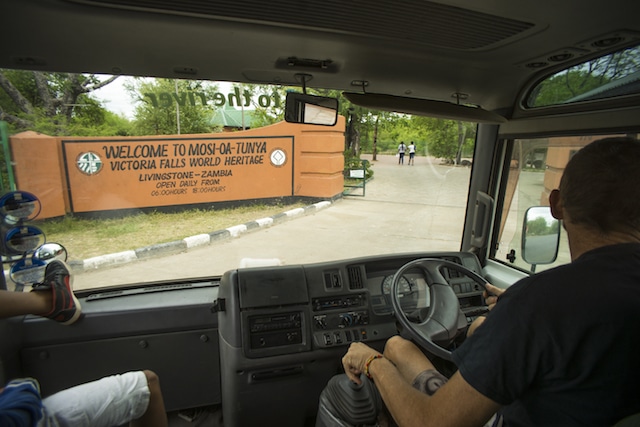 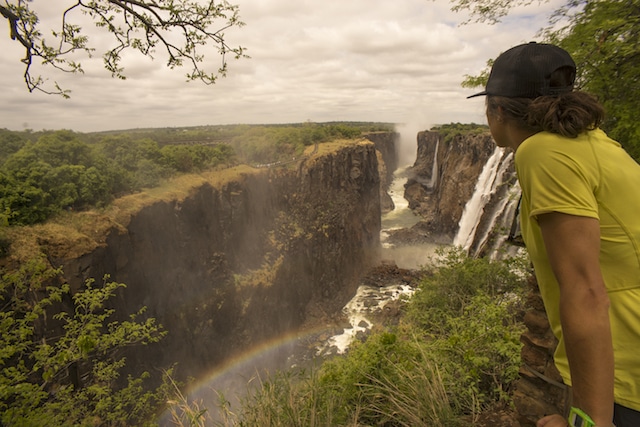 The mighty Zambezi river meanders through Central Africa, slowly moving south east, creating boarders and providing for all in its path.  Just before this historic river reaches its half way mark, its calm waters turn turbulent as the expansive river tumbles more than 100m over Victoria Falls, signifying the beginning of the Batoka Gorge and the infamous white-water section of the Zambezi.  With a continuous curtain of falling water that is 1.7km wide in floods, the powerful water of the Zambezi has shaped the landscape of this area over the past 200 million years, causing the colossal falls to collapse and retreat upstream over time. 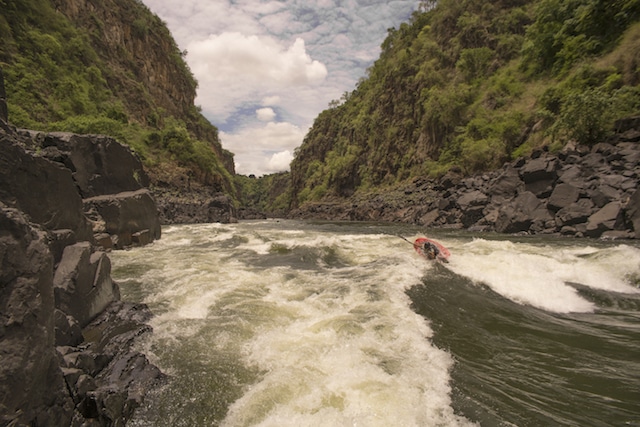 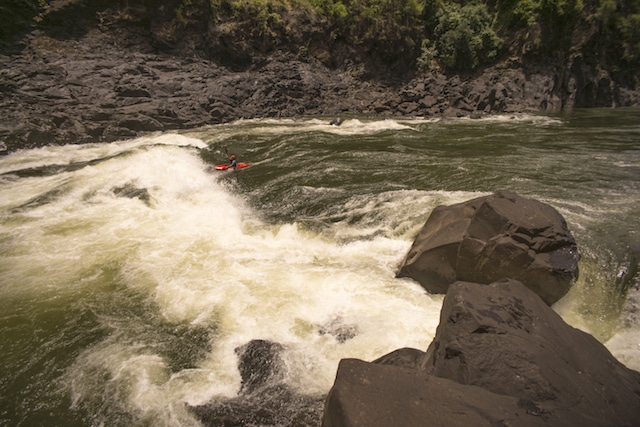 As kayakers hike into the canyon, its overwhelming beauty is evident in an instant.  Moving downstream through this breathtaking gorge, the raw power that the river has enacted on the rock over time is visible.  Imagining what occurs within these canyon walls at peak flows is impossible.  50km downstream, right before the river escapes the canyon and enters a new delta, lies Lower Muemba Falls.  No other place in the gorge, is the authority that water holds over rock more visible that at this magnificent rapid. 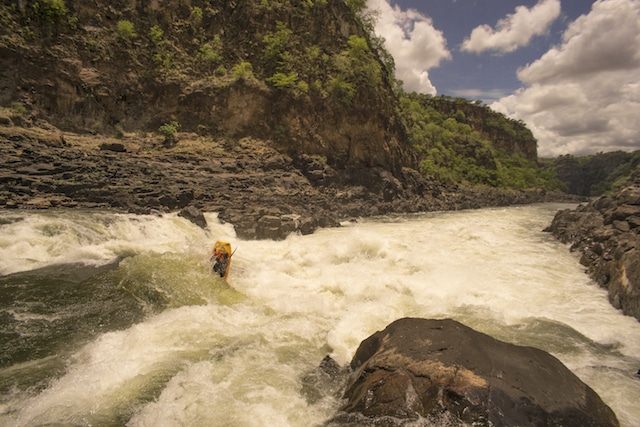 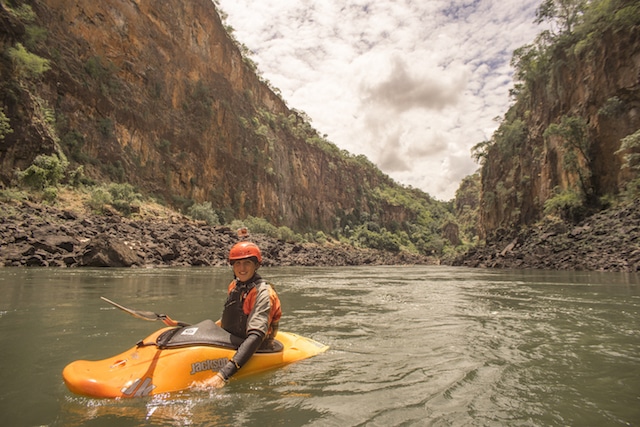 Before one gets to this point of the river, you must combat 50km of some of the biggest white-water that this planet has to offer.  The Mighty Zambezi begins with the classic section of #1-25 which is home to the well known and picturesque rapids #5 (Stairway to Heaven), #7 (Gulliver’s Travels) and #9 (Commercial Suicide).  The day 1 section is filled at every turn with the cleanest, most fun big rapids available.  Near the bottom of this 1st section, rapids start to become a little farther apart, the rocks appear more weathered and it is apparent that the canyon is ageing as you paddle through.  Camp 1 for the classic Zambezi multiday lies on the Zambian side just below rapid #25.  A monstrous, open beach stretching out in front of the steep cliff walls is the perfect spot to kick back and relax after a long day’s work! 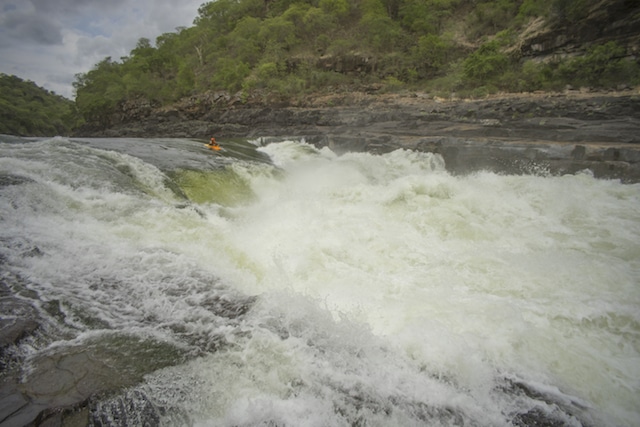 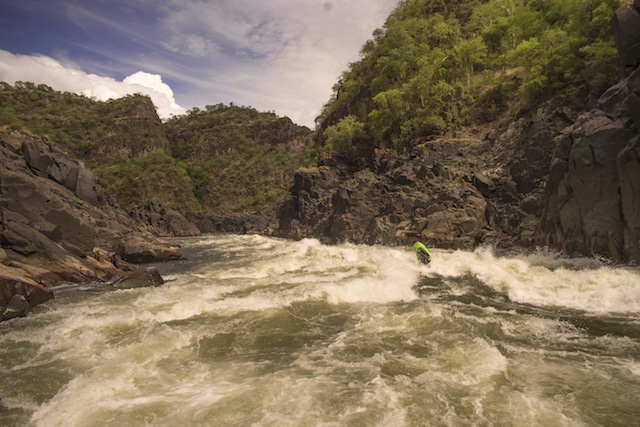 Day 2 features the less known rapids of the mighty Zambezi that still deliver on a tremendous amount of fun.  Open Season, the Narrows and Upper and Lower Muemba Falls are all located in this day 2 section that includes long stretches of crocodile filled flat-water.  Day 2 camp is located a simple 100 meters downstream of Lower Muemba Falls tucked away in an inlet that closely resembles true paradise on earth.  A 2 tiered beach with towering peaks all around and only a quick walk up to overlook Lower Muemba Falls, a rapid we had portaged earlier in the day. 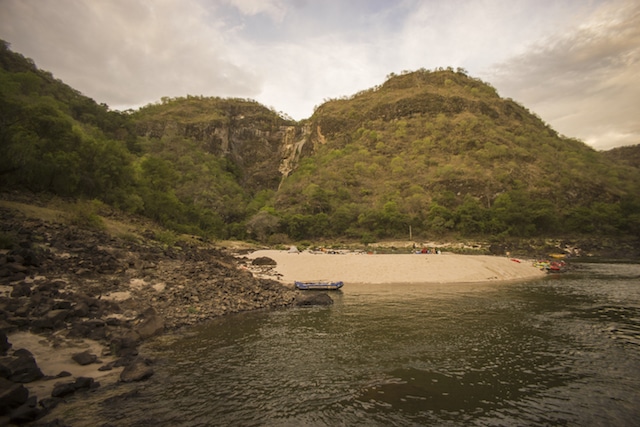 Lower Muemba Falls features rocks on both sides of the channel that are defined by a twisting pattern of holes, or rocks mutated into protruding shapes.  This is the result of the entirety of the Zambezi river flowing through a gap no more than 4 meters wide.  The main flow of rapid flows and drops through the channel as the rest of the flow joins in from river left, falling under the main flow and creating mystery in what occurs under the surface.  This explosive rapid looks untameable at first, but upon close inspection, and a willingness to trust my personal skills.  There was 1 small line visible, that had potential to be clean.  Coming in from river left, a flake rock provided a lip for an angled 5m boof that landed on top of the exploding and unpredictable main flow below.  The crux for this rapid is staying off the walls through the bottom pinch.  Any scenario up against those walls would be a dangerous outcome. 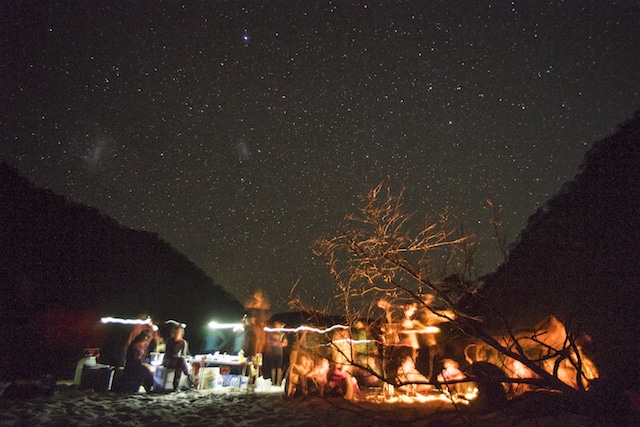 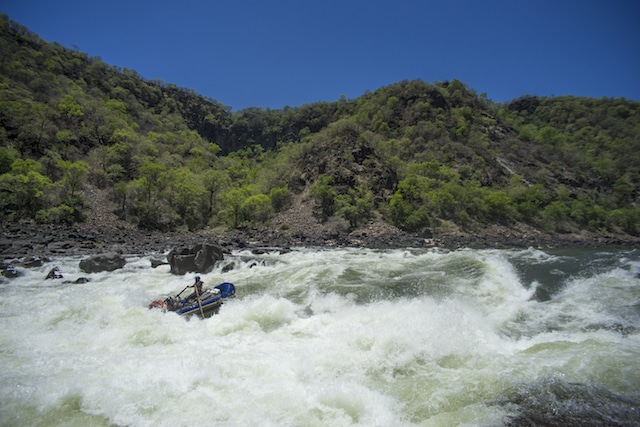 Lower Muemba falls is a special rapid, its size and power are humbling, but also its location is unique.  Being so far down the canyon, this giant often lies in hibernation awaiting its next pursuer.  What also makes the descent of this rapid bittersweet is the fact that it is the closest rapid to the proposed hydroelectric project site just a few hundred meters downstream.  Making Lower Muemba Falls the first victim to the impending project. 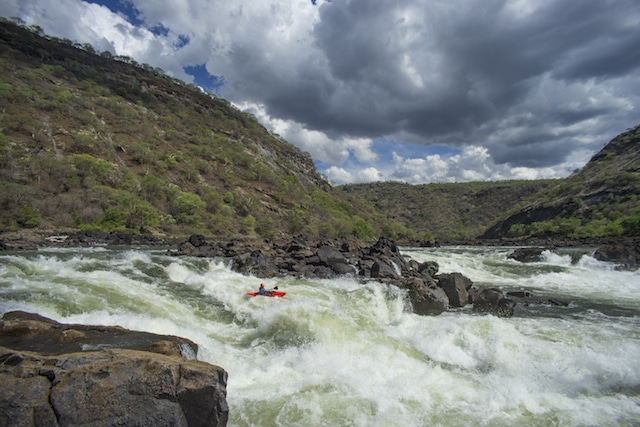 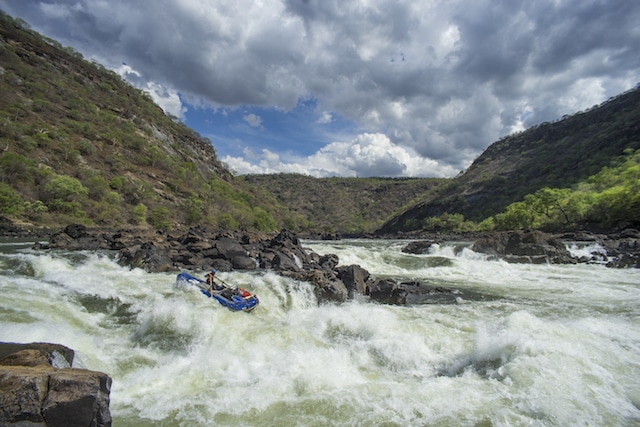 The proposed down dam site for the impending Hydroelectric project is just 1km downstream of the Lower Muemba Falls as serves as the take out for this incredible multiday.  The rapid at dam site gets its namesake from the looming project and is an awesome, pulsating two-part rapid.  The right side of the river channels into an explosive channel that has never been run, and from my first look is unnavigable in a kayak.  The left side of dam site has a tight entrance move that is easily walkable before falling over a wide, clean ledge before all the water comes back together. 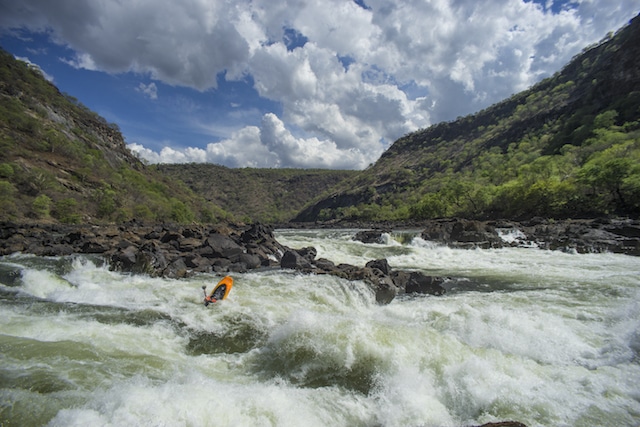 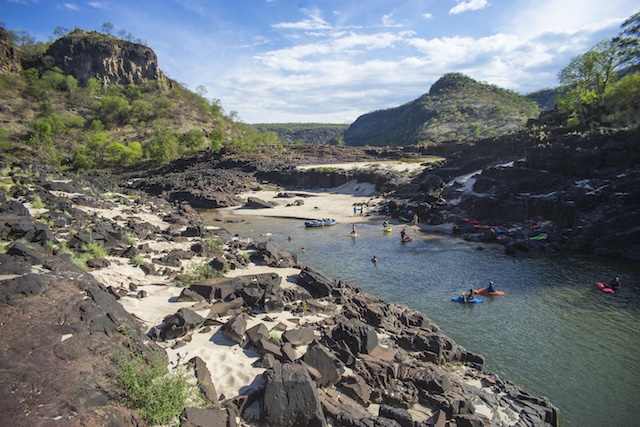 Dam site typically marks the end of the multiday, but for the committed, there is 1 more rapid in the gorge before it opens up into the delta below.  Ghost rider is the grand finale of the Batoka Gorge, just over 50km downstream of Victoria Falls.  Ghost rider is the largest rapid in terms of the size of its waves.  The dynamic waves train grows and explodes and resets as the entire flow of the mighty Zambezi funnels through its final mini canyon.  The reason this final rapid is only for the committed is that any pursuer must hike the mile back upstream to Dam Site to hike out of the canyon.  This 30-minute hike in the roaring sun is in addition to the the normal 45-minute hike up and out of the canyon from its deepest point. 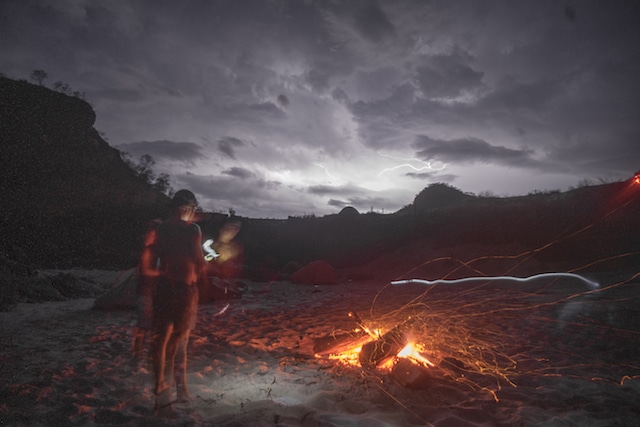 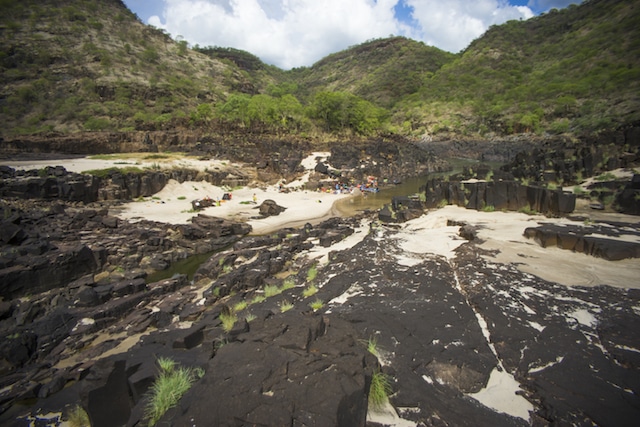 Thankfully the Zambezi is safe for many years to come, but the hydroelectric project planned will turn 50km of prestigious white-water into a winding 50km lake.  Not only having devastating environmental impacts, but seriously impacting the local communities in a negative way due to the large reliance on tourism for daily work on both sides of the river! 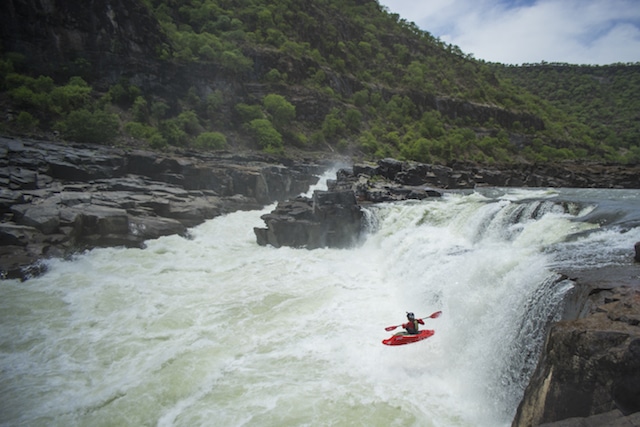 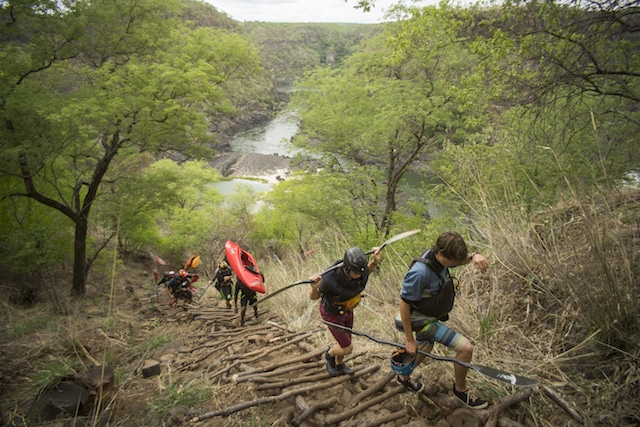