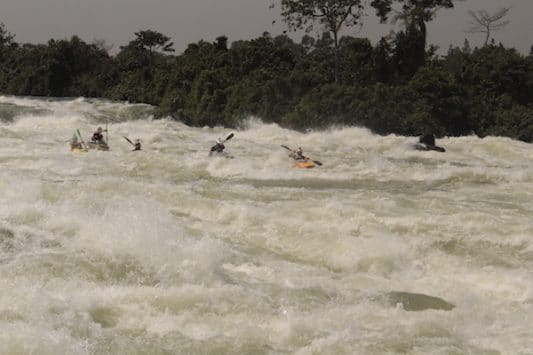 A name so ominous that only a quick mention is needed to instill a deep fear into even the bravest of athletes.  The Dead Dutchman; a prestigious, intertwined collection of exploding white-water channels on the top section of the Nile.  This menacingly named and legendary rapid played host to Stage 2 of UNLEASHEDxUganda: The Dead Dutchman BoaterX. 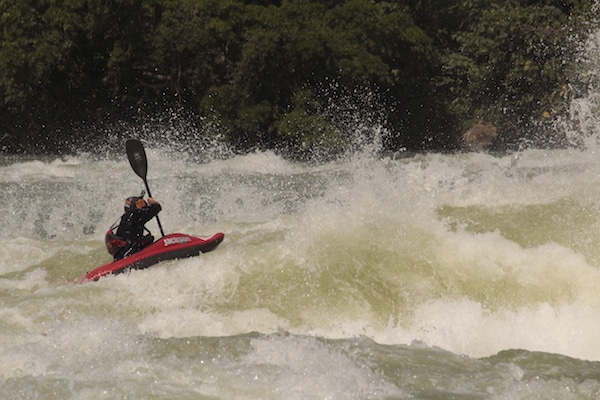 Stage 2 began with a common scene; athletes gathered in a line, just after 8am, in search of caffeine.  The knowledge of the impending BoaterX on the Dead Dutchman held many athletes to fitful nights of sleep and caused many others to wake early, visualising what the day had to offer.  The Nile River Explorers trailer, loaded with 32 kayaks, athletes, and volunteers, pulled out of camp and made its way towards the river.

The safety challenges of holding an event on a rapid as extensive as the Dead Dutchman were not overlooked.  The severity of the situation if an athlete became separated from their boat was the organizers biggest fear, and the safety plan reflected this anxiety. Athletes in the race were the premier level of safety as they would be the closest to an athlete in trouble with secondary safety teams set in high traffic positions.

The breakdown of the format used for the Dead Dutchman BoaterX was as follows:  20 men started the day in 4 heats of 5 racers.  The top 3 athletes from each preliminary heat advanced to the semi finals round which included 2 heats of 6.  Again, the top 3 athletes from each heat advanced and made up the final race of 6 athletes.  The women’s race consisted of 2 athletes that stepped up to the challenge of the Dead Dutchman and these fearless women went head to head in a single round.

The organizers called for a mandatory practice lap of the Dead Dutchman to be completed by all athletes prior to race day. The race itself could not be the athletes first decent of this massive rapid with no exceptions to this extra safety measure. This precautionary step proved valuable as the athletes were able to spend an entire day, prior to Stage 2, becoming familiar and comfortable with the entire event site. 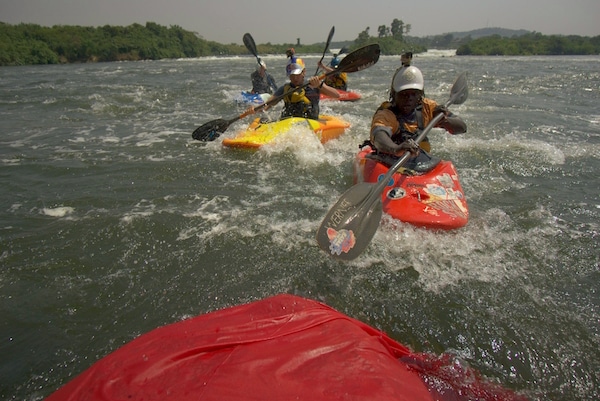 Organizers aimed to start heat 1 of men’s preliminaries at 12pm sharp; with safety set, and a media team in place, the first racers hit the course at 12:02pm local time.  The action was fast, chaotic and glorious from the first “GO”.  Men’s prelims immediately exposed that anything can happen in the unpredictable madness of high volume boaterX with high ranked contenders Bren Orton (UK) and Kalob Grady (CAN) not advancing past their first races.  This left the field open for young guns, Tom Dolle (FRA) and Kaelin Friedenson (USA), to exhibit exceptional skills in besting their past teachers in the preliminary round.  Semi finals unveiled 2 more hectic races with numerous changes in racers positions throughout the race course.  Semi finals heat 1 revealed a hard fought race in which Dane Jackson (USA), Yusuf Basalirwa (UGA), and Kaelin Friedenson (USA) avoided elimination to move into the finals.  Semi finals heat 2 involved a chaotic finish for 3rd place as Quinton Kennedy (CAN) came from the very back to snag the final ticket to finals along side Sadat Kawawa (UGA) and Raoul “Honey Badger” Collenteur (NED).

The women’s finals included two exceedingly fearless kayakers; local crusher and emerging honey badger Amina Nakirya (UGA) and defending UNLEASHED champion Darby McAdams (USA).  The two brave women battled it out through the crux of the Dead Dutchman until Amina got pulled wayward by a large whirlpool.  Darby stayed focused and on-line through the entirety of the rapid to earn her 2nd victory of UNLEASHEDxUganda. 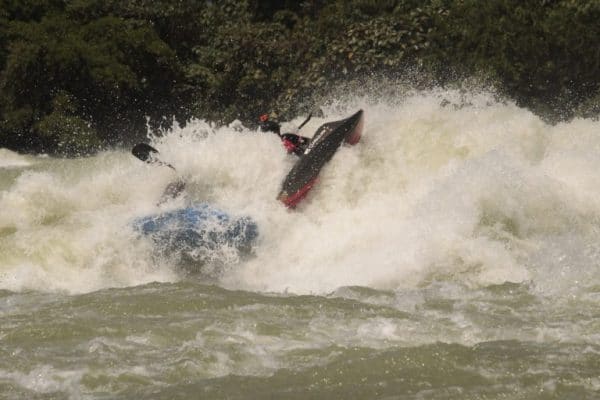 Men’s finals fielded an enticing combination of competitors as 14-year-old Kaelin Friedenson (USA) lined up against stage 1 winner Dane Jackson (USA), Raoul “Honey Badger” Collenteur (NED), Quinton Kennedy (CAN), and local shredders Sadat Kawawa (UGA) and Yusuf Basalirwa (UGA).  The signal was given and the boys were off to the races.  Sadat Kawawa (UGA) flaunted undeniable strength and stamina as he sprinted out to the lead on his 3rd lap down the course.  Sadat Kawawa (UGA) built on his early sprint and took a commanding lead of the finals as the chase pack tangled and crashed in a magnificent fashion through the crux move.  Dane Jackson (USA) and Raoul “Honey Badger” Collenteur (NED) mingled on a seam line for the better part of the length of a football field and came away mostly unscathed.  Yusuf Basalirwa (UGA) took advantage of this collision to storm into 2nd place while Dane Jackson (USA) recovered from his misfortunes to seize the final spot on the podium of the first ever race held on the notorious Dead Dutchman.

A collection of 22 athletes charged throughout 8 races for a combined 40 descents of the Dead Dutchman today; and to the unfathomable delight of the organizers, there were 0 swims and 0 injuries.  Athletes stepped up to the highest level today to successfully navigate these truly significant rapids.  The goal of UNLEASHED has always been to push and to progress the sport of kayaking. Today, on the Dead Dutchman, SEND accomplished this goal.

Coming up in Stage 3, UNLEASHED athletes will fire up the best wave in the World and display freestyle kayaking at the highest level.  The Nile Special freestyle competition will feature the best freestyle kayakers in the World battling it out, but with a SEND twist.  Be sure to check in at 8am eastern standard time on Tuesdaymorning for the Stage 1 edit and full results.