Having a Blast on M-Wave With the KelloggShow

We finally went to the wild and crazy M-Wave in Montrose, Colorado. I say finally because we live in Colorado and M-Wave is a BIG deal in Colorado. A big deal, mostly because there are so many rumors floating around about it, but I’ll get into those later.

So, everyone in our family kept saying, “I can’t believe we’ve never been to M-Wave.” But, really, there are so many great spots in Colorado and so much false information about M-Wave, that it was never really a priority. 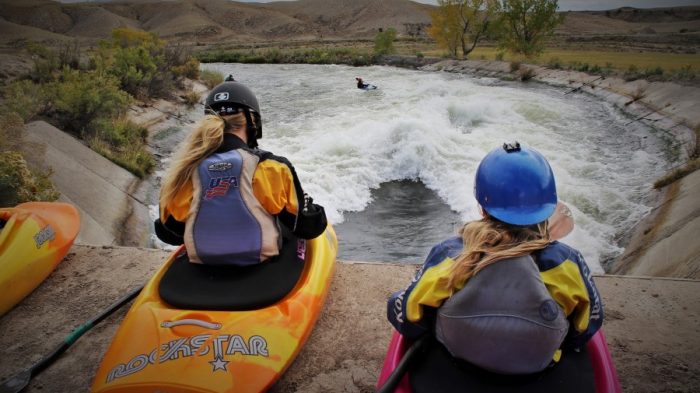 After debating forever, we decided that instead of heading east to TN or west to Idaho, we are going to stay in CO for Kady, Kenny and Dally to train for Worlds. We are mobile, we travel all the time, so really we could have gone anywhere, but the water is actually pretty good here, so we are taking small trips around the state, keeping our homebase in Glenwood Springs.

So, this past week, we went to M-Wave. It was a fun change because we’ve been playing in holes for the past two months training for the World Championships in San Juan Argentina.

For Kady, Kenny and Dally, all training is good. From flatwater to waves to holes, they get something out of every day they spend on the water. Obviously, by the name, you know M-Wave is a wave. In fact, it is a really big wave on a canal, not a river.

And, it just so happened to be M-Wave season because the canal was flowing high to irrigate the land around Montrose. So with our stoke high, we piled into the RV and headed to Montrose.

Now, the whole time we were planning to go I was so excited to surf it. I looked at pictures, I watched videos and I really could not wait until we got there. It looked crazy and fun and wild and insane. 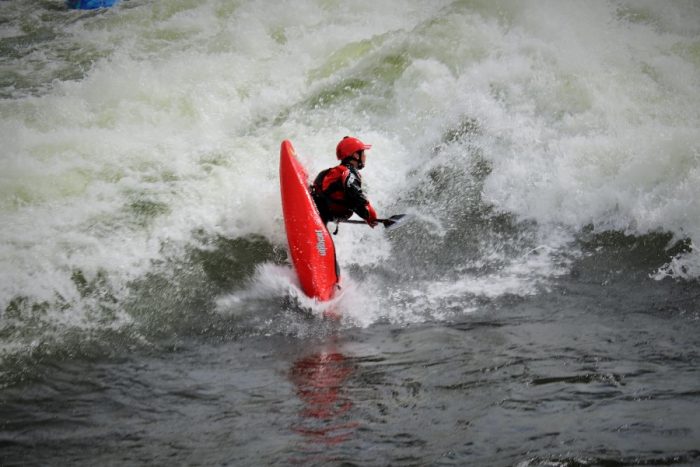 But then, as we pulled into Montrose, I started not wanting to surf. I started to get really nervous, my stomach even hurt. I haven’t felt this way in a long time, like since I surfed Skookumchuck in Egmont, BC!

You know that feeling, when your stomach gets all tied up in knots? Yeah, I had that feeling. But, I did what my mom always tells me to do, just not worry about it or think about it until I’m actually in the water, about to face the thing that scares me.

So, when we got to Montrose we dropped the RV at the WaterPark, along with Coby, Elly, Emmy, and my mom. It had been raining like crazy, so we didn’t want to take the chance of driving the RV up and getting stuck. Luckily we didn’t bring the RV because there was no way we could drive it over the bridge and to the other side of the river where we needed to be.

I was pretty calm on the truck ride over. But, when we got there and looked at it from above, over the bridge, Rowdy and I got really scared. This wave is no joke. It is huge. And, from the bridge where we were standing, it looks like something massive was behind M-Wave, that would just swallow us up.

And, like we had heard, the river right eddy looked really really scary. I decided to avoid it at all costs.

Now, like I said, there is a lot of crazy talk when it comes to M-Wave. Most people tell you it’s totally illegal, that it’s an expert only feature, that just behind M-Wave there is a sieve that goes underwater and a swim is extremely dangerous and possibly fatal.

I like getting a lot of information about a river I’m going to run or a wave I’m going to surf, but I like it to be good beta, trustworthy beta. I trust my family to give me good beta, so Rowdy and I waited for Kenny and Dally to surf M-Wave to let us know what it was really like. 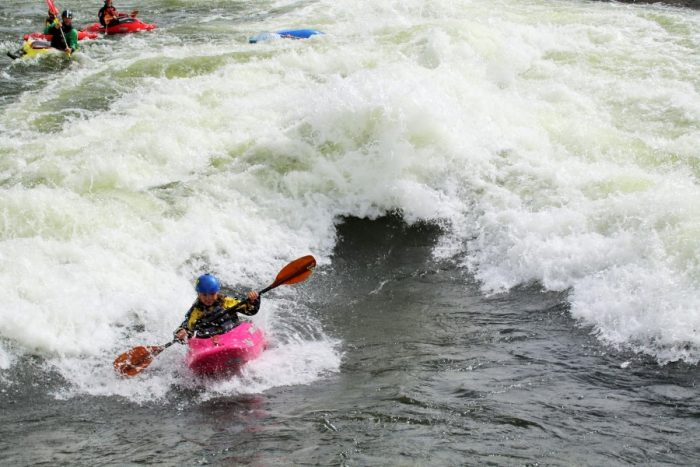 Turns out, everything we had ever heard about M-Wave was wrong.

After our 4 days of surfing M-Wave, I can tell you none of the beta is true. Except that it is a difficult wave and maybe a solid roll is best.

But none of us could see where a swim would be any more dangerous at M-Wave than anywhere else. Especially, if you had good safety boaters around. And, luckily, I always have awesome safety boaters everywhere I go.

It’s also not illegal as the wave is on BLM land. In fact, there were other boaters there on two of the days we were there.

Anyway, M-Wave is super super fun, and scary, mostly because of the eddy’s, because they are really intimidating.

Seal launching off the bridge is a thing, or at least it is for us. Kenny, Dally and Kady were the first to seal launch off the bridge. Then, Cardy and my dad seal launched. Rowdy and I were way too scared. We decided we would do it the next day, so we walked down and just got in the water from the eddy. 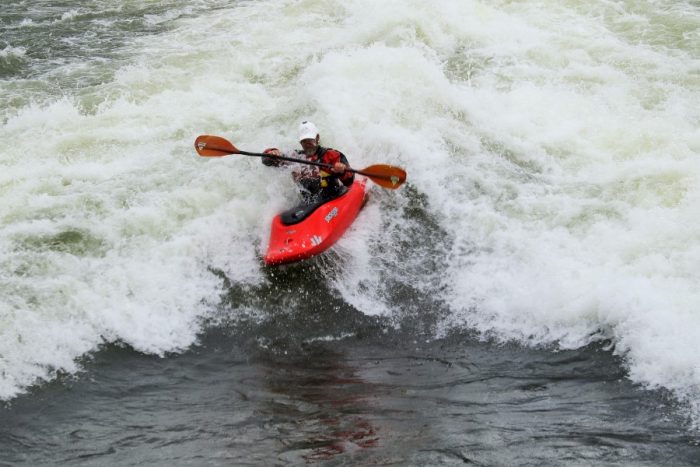 Once Rowdy and I were in the eddy we got crazy scared. We were just paddling away from the wave because both the eddy’s are really powerful and they push you straight in the feature.

Kenny paddled up to us and said, “What are you doing? The wave is that way!” LOL, I was like, we know!!

And then I just thought, “I’m being ridiculous! Just surf it, Maddy!”

So I paddled up to the wave told everybody I was going to do it before I could change my mind.

Kady showed me exactly where to paddle and I went on and surfed. I was pleasantly surprised. M-Wave isn’t trashy, but it’s fast and you can front surf for days. 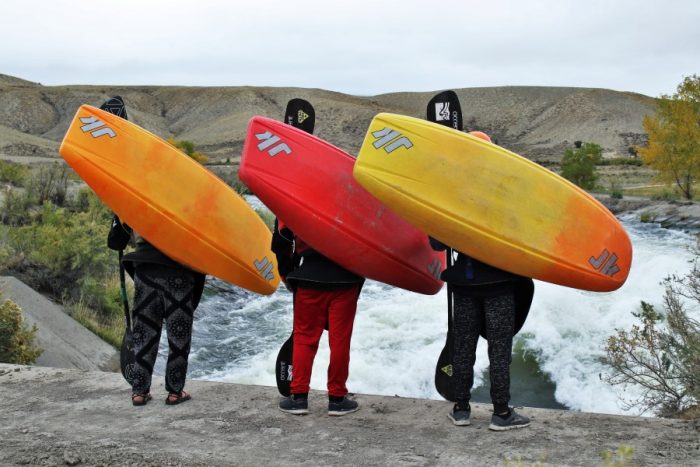 I tried a spin, but got flipped. When I rolled up I found myself in the river right eddy. The eddy I absolutely didn’t want to be in ever. I practically yelled, “Oh no!” No way I was staying there. So I just paddled as hard as I could out, ferried across the river and into the left eddy.

Now, Rowdy will do almost anything I do, so once he saw me surf and have fun, he jumped right on M-Wave. He did so great, he was really brave. I always forget he’s only 10!

I’m telling you, though. Surfing M-Wave was the scariest thing we’ve done in a long time. And it was totally freezing, like 45 degrees and rainy. Thank God for our Kokatat dry tops and SnapDragon skirts, they kept us dry and warm.

Rowdy and I surfed it a few more times, then we got really cold so we got out and took pictures of everyone else. We all brought our GeigerRigs so we could filter the river water and have an endless supply of water. For some reason surfing always makes me super thirsty, so I was really glad to have our rigs with us.

Finally, Kady, Cardy, and my dad finished because they were exhausted. That’s the other thing, M-Wave is exhausting! 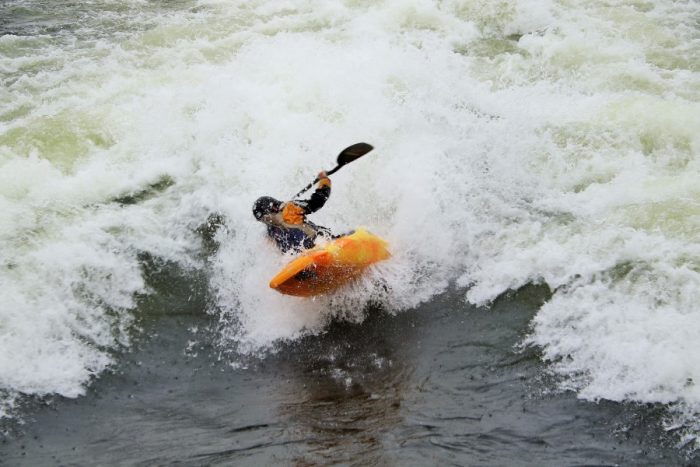 Kenny, and Dally hardly ever get tired and so they stayed in a while longer. I’m serious, they can surf anything forever, they only leave the river because it gets dark or we are all begging them to leave.

But, Dally had a little eddy carnage. He went in the river right eddy and got flipped. His helmet scraped against the concrete wall as he rolled up. Now his helmet has a huge scrape across it. This confirmed my thoughts to always catch the river left eddy.

We all packed up then drove back to the RV and told my mom and Coby, Emmy, Elly about it.

The next day Rowdy and I were thinking about not going back but Kenny and Dally convinced us to go. They said the seal launch was epic and that Rowdy and I really should do it. So, of course, we got dressed.

We watched Kenny seal launch first, then Cardy and Kady. It did really look super fun. So, Dally helped me seal launch off the bridge by pushing me off himself, instead of me pushing myself off. And, oh my gosh, it was so sick!! You just fall and right when you hit the water it’s moving so fast! It’s like a roller coaster.

Rowdy and I did nothing that second day but seal launch over and over. We must have seal launched 25 times.

I was surprised that Cardy surfed M-Wave all day each and every day, because he was almost as scared as I was going in. But, he did so awesome. He is a really good kayaker and can throw some great wave tricks.

My dad kept coming into the eddy laughing hysterically, it was so funny. He has such a great time everywhere we go. I think he loves kayaking more than any other sport. 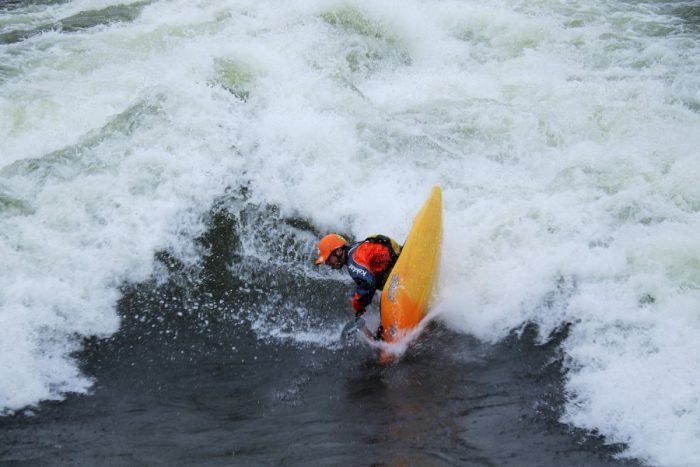 Kenny, Dally, and Kady are doing so well. Their blunts are huge and I am going to have them teach me how to do a flashback because it looks super fun.

The third day we were there we surfed for maybe two hours, and then went exploring. Kenny & Dally wanted to check out the top holes in the canal because they hoped they were surfable.

Above M-Wave, about two miles up, the water actually goes under a mountain. We watched it go into a deadly tunnel that goes underground. The water goes completely underground and totally disappears until it comes back up like a mile away! That is so freaky!

Finally, we got to the holes. They are absolutely NOT surfable. I’m pretty sure if you dropped into them you are for sure dead. It’s a crazy body holder and you could easily get stuck behind it. And there are two. So, if you got lucky and survived the first, there is a second hole right behind it that will suck you in.

We took some SnapChat videos and some pictures. I threw a stick into it and it completely disappeared, never to resurface!

The last day just Kenny, Dally, and Kady went up to M-Wave. My dad went and took pictures and video. We stayed back and played at the skate park for a few hours, in the rain. It doesn’t sound fun, but it was.

When they got back we packed up and left because Kady had a 3-day rafting trip to get back for!