What the World Championships means to Me! 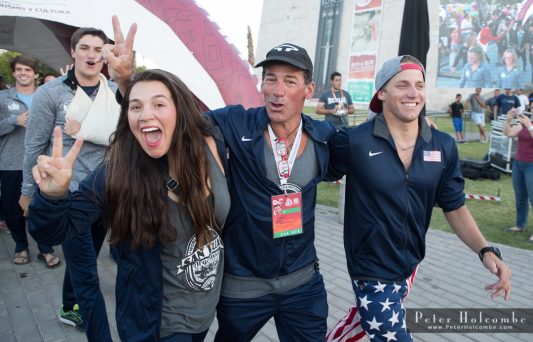 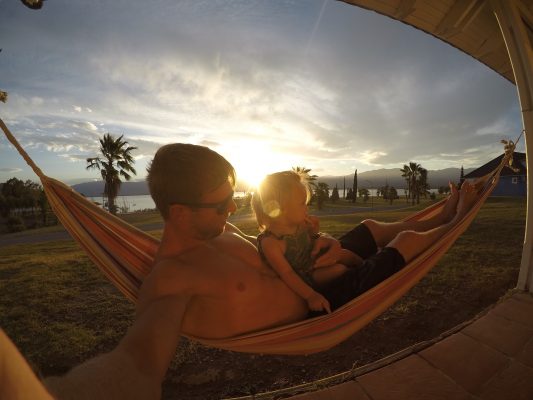 How do you feel?

Who do you think is going to be your toughest competition?

I almost giggle a little bit because the Worlds is coming, ready or not, how I feel changes every given second and whose going to be my biggest competition is making the assumption that everyone that could have a good day will and that’s never the case. (including myself) and anyone could just have an amazing day!

Meditation is the act of focusing solely on one thing, usually your breathing. You can try counting steps as you walk, or immerse your self into something completely. Kayaking is meditation for me. I leave feeling refreshed, rejuvenated and ready to take on my day. When on the water I am focused on ME and MY Kayaking. No one else. I can’t control what the competition will do. When I watch anyone else, I am not thinking about what they are doing or getting, but visualizing what I need to do. 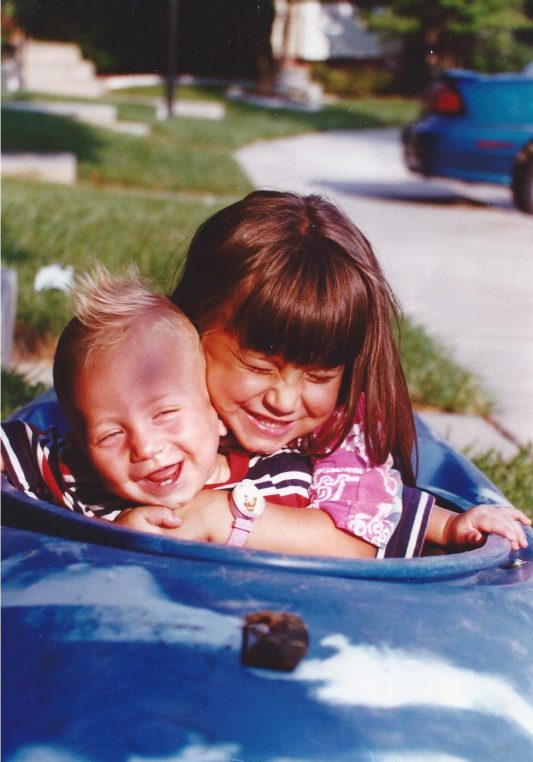 As the Worlds is getting close- tonight is opening ceremonies, I think about my routine, my moves and my body. I am sore, tired and happy. My body is saying no more and my mind is as happy as ever. If I seem stressed its because of the things I cant control- mainly my brothers hurt knees, my husbands amazing ability to not sleep, my Dad pushing his body to exhaustion because he wants to get one more session, one more ride at all times. 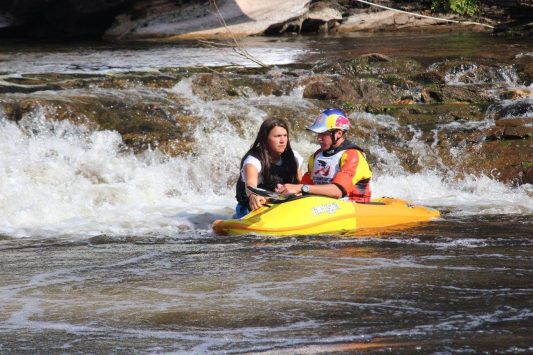 I’ve been a spectator at numerous worlds before partaking in any myself.

My first Worlds was 1993 when I was 3 years old, my Dad won and continued to win several World Championships- with the longest streak and most Freestyle Gold Medals of anyone- 4x K-1 Gold Medals. He never talked about winning, but he always talked about overcoming the challenge of the competition. 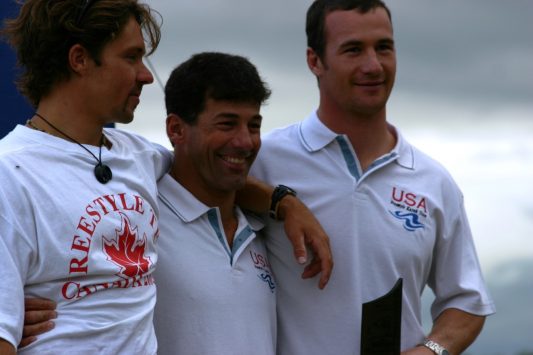 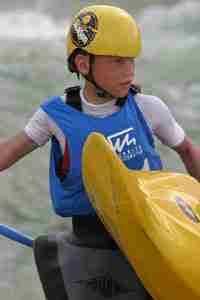 My first Worlds was in Australia, following pre-worlds, it was a different format, the finals cut down from 5,4,3,2 to 1. I had been paddling incredibly well and was so excited to be in my first finals. I had a bad run and ended in 4th place. (the old system left no room for error in finals) I don’t remember being upset with the placing but I do remember being disappointed in my paddling, and decided to work on being in high-pressure environments and entered the women’s class at almost every event afterwards. I learnt that embracing the pressure and encouraging it, made me a better paddler almost immediately. My memories are of swimming in the bottom eddy, the same silly songs playing at the course, the family vacation that followed and the opening ceremonies where the diggery do was a big hit 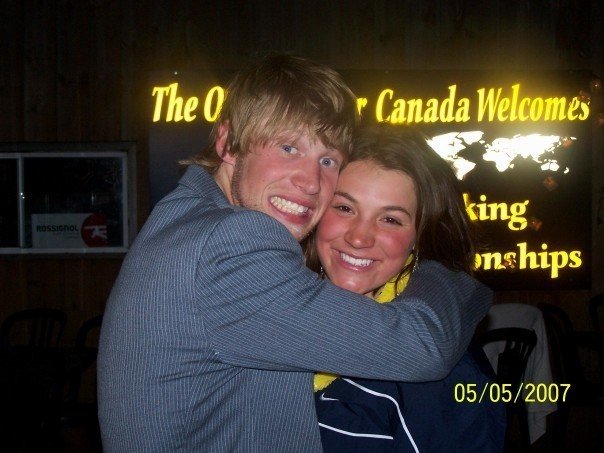 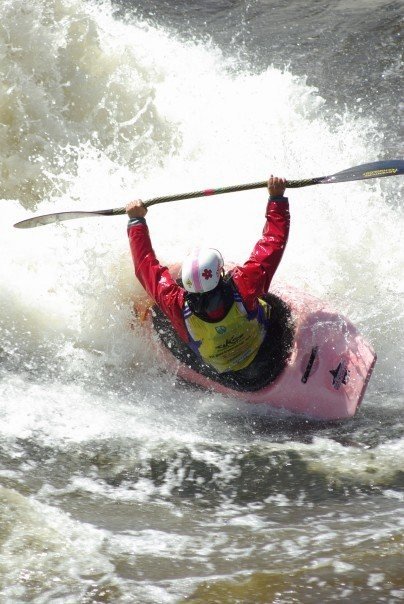 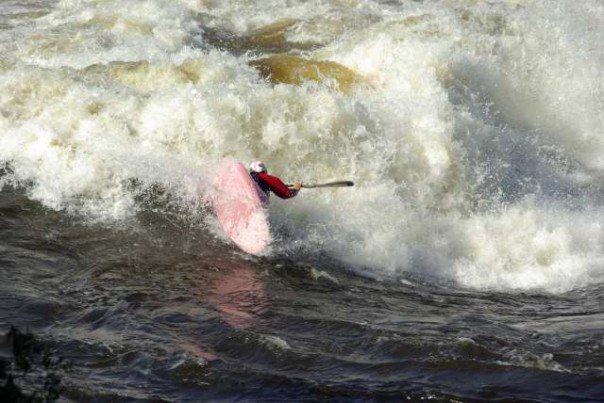 My second Worlds was at Buseaster, and man was that a challenge, mentally and physically. I was terrified, it was cold, big and not quite in. The wave Waikiki where we trained didn’t make anyone feel that great about their paddling. I learnt to focus on visualizing what I wanted to do as we couldn’t practice it as much as we would have liked. Every day I got off the water, in my head I would say I did it, and try to focus on the fact that I was proud for going out at all. I had trained with Ruth Gordon in Uganda (and the rest of the family) and I had way more moves there due to me simply not being scared. Performing scared was hard, but I am still so proud that I was going out at all… My memories are of Nick breaking out from another paddler to one of the best- winning every round except for finals. Visualizing my rides to Die Another Day by Madonna- fitting for how scared I was…. I remember watching movies and hanging out with all the kayakers at the farmhouse, bundling up because we were freezing. I remember thinking it was the coolest thing ever to win with my Dad. 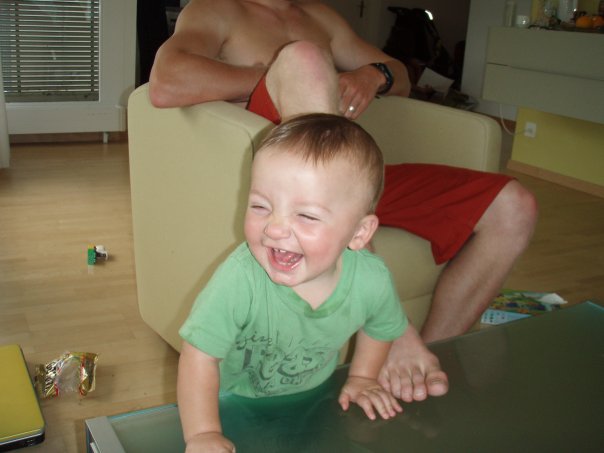 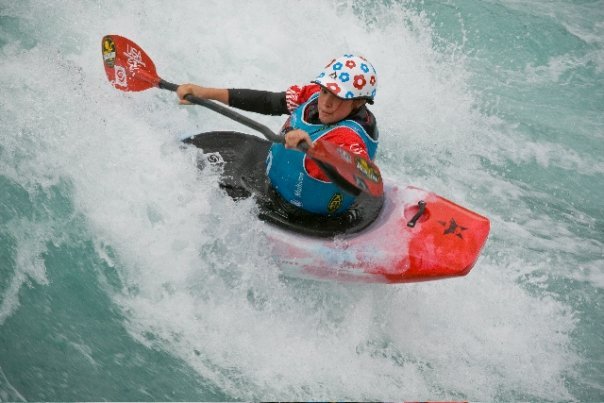 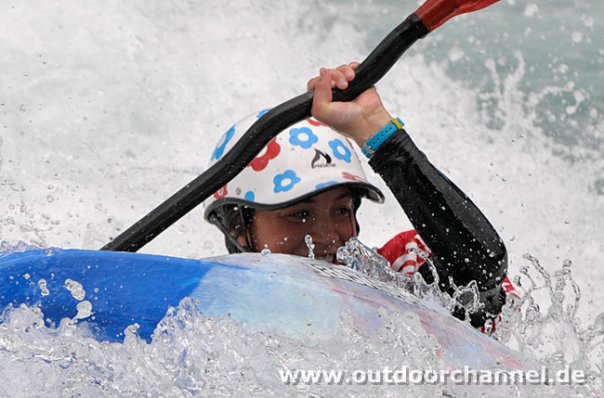 My third Worlds was in Thun, Switzerland. The wave only came in about 2 days before Team Training, man did that stress people out. But I was so excited once it was in because it was so much fun. I remember getting there early and checking into hotel Freinhoff, the muesli in the morning, the swans and color of the water, the flowers along the bridge and the best pad thai ever. Nick paddled with a vengeance and was leading the pack the entire way. My Worlds song was Run this Town by Jay Z and Rihanna and it played on MTV non stop in our hotel room. My baby brother KC turned one and danced on a table while eating pizza that was amazing and cheaper then bottles of water. I remember afterwards getting royal treatment from our distributors and dealers as Nick and I changed our ticket for a post Worlds kayaking Honey Moon and newlyweds and the current world champions. 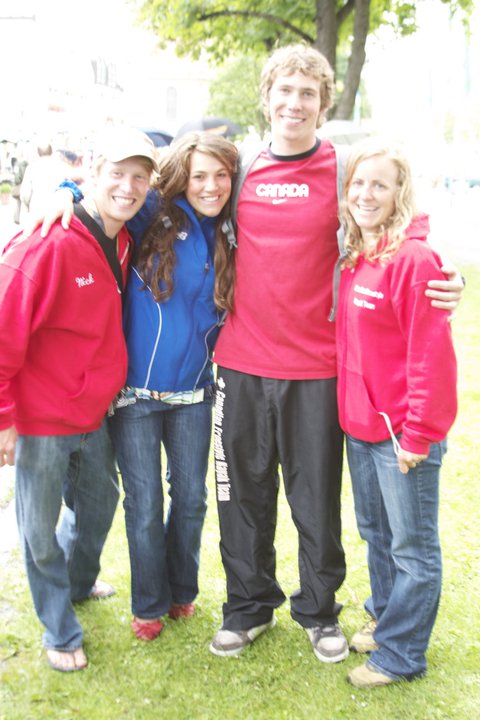 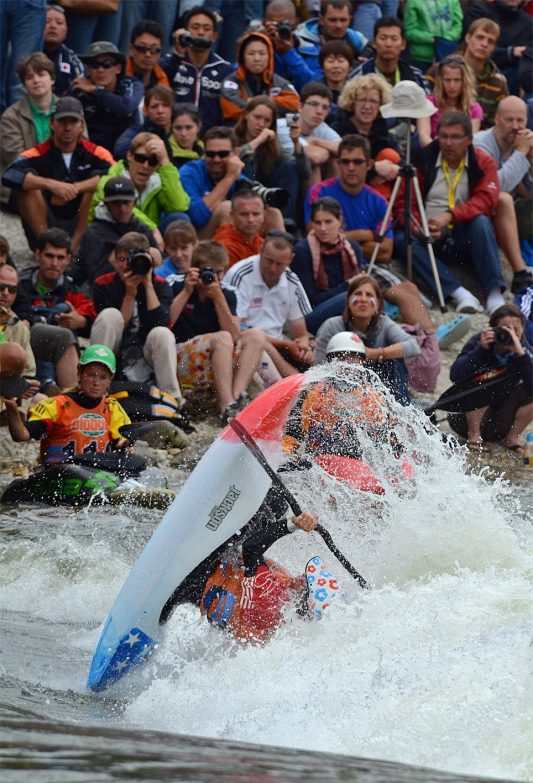 The next Worlds was in Plattling, Germay. We had so much fun training at the feature, and at SuperHole in Uganda for a month beforehand. KC was now a toddler and traveling with him was entertaining. We were walking distance from our hotel and I remember grabbing Ruth Gordon every moment I could and going down to train. It was the first trip I met Courtney Kerin, and it was the first time I ever saw Dane with his posse of friends. I remember beer tents and dancing with Bartoz from Poland, I remember a tornado came through moments before Women’s finals and people’s kayaks were flying away. I remember endless amounts of Bananagrams on the floor in our room with Joel Kowalski. The phonics monkey was getting judged insanely hard, and I remember leaving it in regardless of what judges were doing. That game plan didn’t play out and I became focused on the judges and poor judging calls which made me doubt myself, and reflected in my rides. 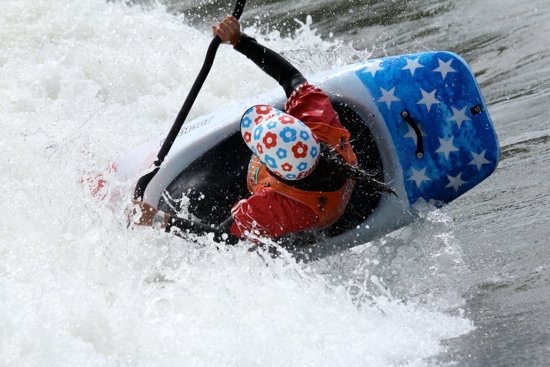 I didn’t make the team the following year, 7 months pregnant, frustrated with the water levels and various other things out of my control. But it did get set me up for one of the best years ever, and I looking back I wouldn’t have changed anything. My highlights at the World Championships as a spectator include counting rides with Jasper Polak, showing off my 1 month old to everyone and anyone, the amazing gifts people brought for him, coaching Ruth Gordon and paddling with her when I could. Having an epic cabin and Nick getting drunk before his drytop was even off when he missed the final round. 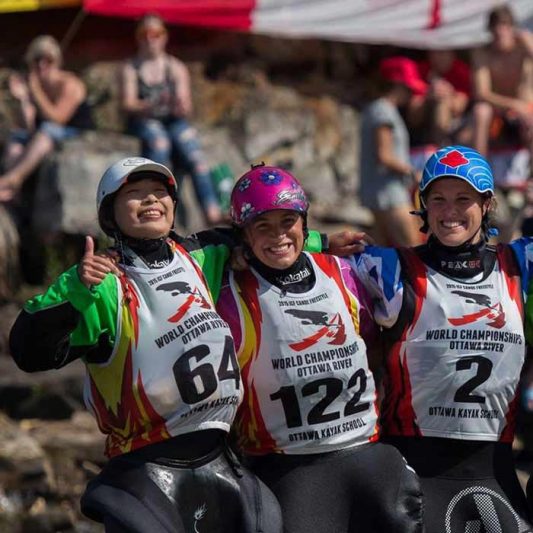 2 years later and I was ready to compete at the Worlds again. And it was back on the Ottawa, River, on one of my favorite waves- Garberator. I kicked it off by making the Team in Glenwood and continued to train on the Ottawa for the Summer. I was now a Mom and was fueled by the constant question of- are you still kayaking? Balancing motherhood and training for the first time at a World Championships was one of the most rewarding things. My focus was on my paddling but I also had this venue of pure happiness (and hard times) that distracted me from continually staying 100% focused on kayaking. By having the distraction, I stayed out of drama and was always excited for the “me time” kayaking gave me. My memories are of rain dances with tucker in a muddy parking lot between sessions, the way the sun broke through the trees for the early morning sessions, having Date night with Nick that consisted of just the two of us at Garb and wine and filet in our RV afterwards. I visualized to the song Lean On and was always dancing while thinking about kayaking. I remember the feeling of pure bliss when my Brother won, and the crowds roar when Nick would enter the wave. I remember the stress of Nicks finals- getting battered by the pressure to perform in front of his family and friends, I jumped in the river and swam over to remind him, you only have one more ride, just go out and have fun. He smiled and did just that, and moved from 5th to 3rd. I was so proud to see him up on the podium again. 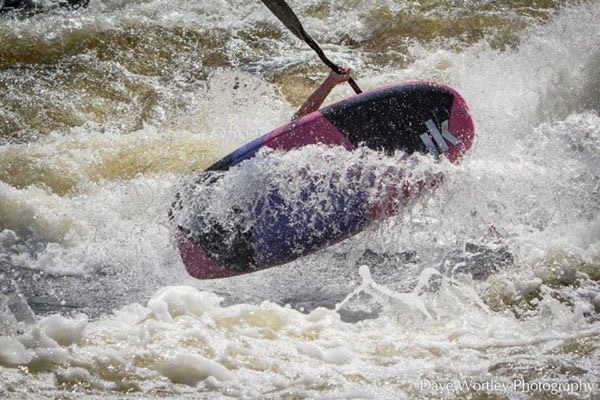 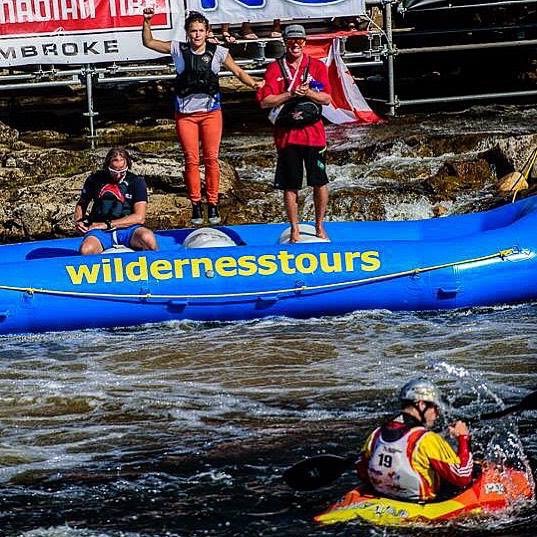 Now we are in San Juan, Argentina, and what a change in culture and experience. It’s already been one of the best World Championships and it hasn’t even started yet. My cup is running over with positive experience. My kids have been incredible, sitting at the river and coaching me, Parker is only one and is such a trooper, Tucker is 4 and has been telling me I need to work on my flip backwards…. I have spent time with the people most important to me and kayaking is so much fun! Its hot and the kayaking is refreshing and exciting. We have been to vineyards, driven through deserts and the Andes, celebrated birthdays and danced into the night. Dane singing the Climb by Miley Cyrus, my Mom being slightly lush at the opening dinner asada, people asking if my Dads wig is real, Tucker trying to speak Spanish and a makeshift Thanksgiving with over 25 kayakers. I’ve been listening to Thunder 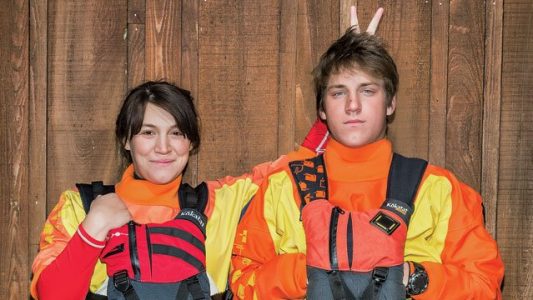 So what does the World Championships mean to me- it means community, opportunity, experience, and passion.

I don’t know what this week will bring, but I do know that there has been endless amounts of unforgettable moments that I will forever treasure.

I don’t know what the challenges will be, but I am ready to face them.

I don’t know what the outcome will be, but I am a better kayaker then I was before training.

I don’t know how the boys will do, but I will always be their #1 fan….

Everyone thinks it all comes down to one moment, but to me its not about any single moment, but all the moments that lead us to where we are today.

Thank you all so much for the support, I am so lucky to be in such a unique and inspiring community! 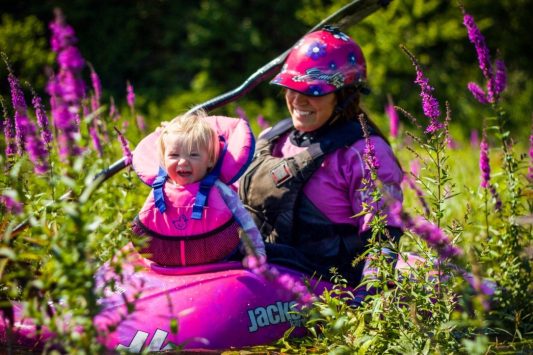