Going with the Flow – Fly Fishing in Southeast Louisiana

Last weekend was a perfect example of why I don’t make formal plans in November or December.  My wife and her best friend planned to take the kids to the University of Arkansas Homecoming game.  I had her blessing to go do guy stuff like hiking, camping, wrestling alligators or whatever normal guys do when they have a weekend free.  Me, I can only think if one place I want to be in November. 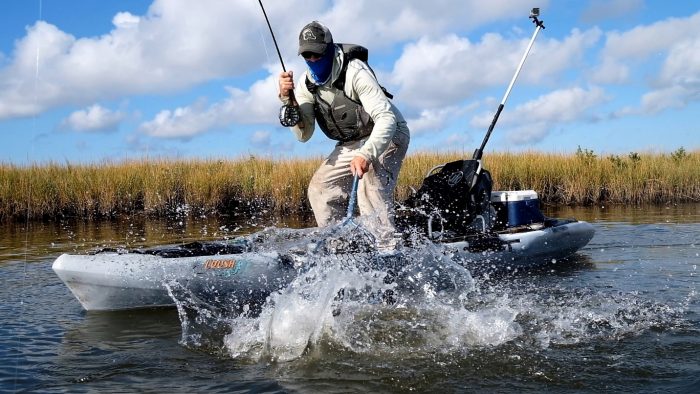 The bull redfish won’t give up.

As the weekend got closer, I continued to check the weather forecast.  That’s the one real deal breaker for me.  The week before, I was actually driving to Grand Isle, LA when I noticed the weather forecast changed from awesome to not happening.  I turned around and went home.  But as of Thursday afternoon, everything was looking almost perfect.  Seriously, conditions like the ones I saw over the next 4 days don’t happen often and when they do I’m the guy who will do anything to get free. 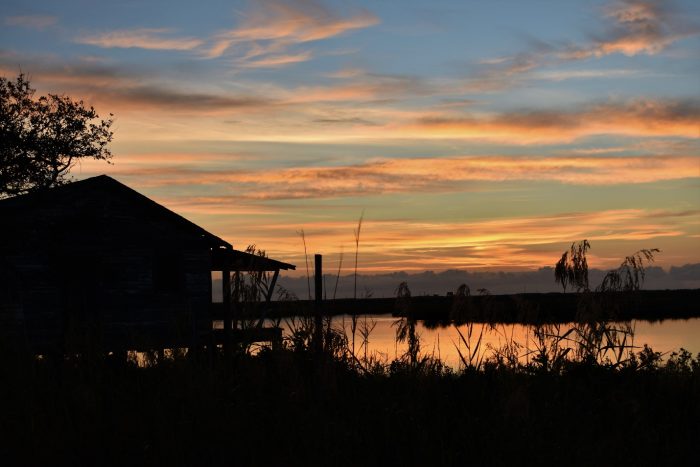 When you’re the guy who doesn’t plan anything, it’s hard to find other people that can tag along.  Not surprisingly, I had the next three days to fish but they would all be solo, which isn’t a big deal to me.  While setting in camp preparing my gear Friday evening, a buddy saw a post I made on Facebook and reached out to me.  The good thing about being the guy who never has a plan is I’m flexible.  We exchanged texts and after an hour, it was decided we would meet in the morning around 7am and Kevin would take me to his super-secret, no cameras allowed, it’s gonna be really messy combat launch to chase redfish. 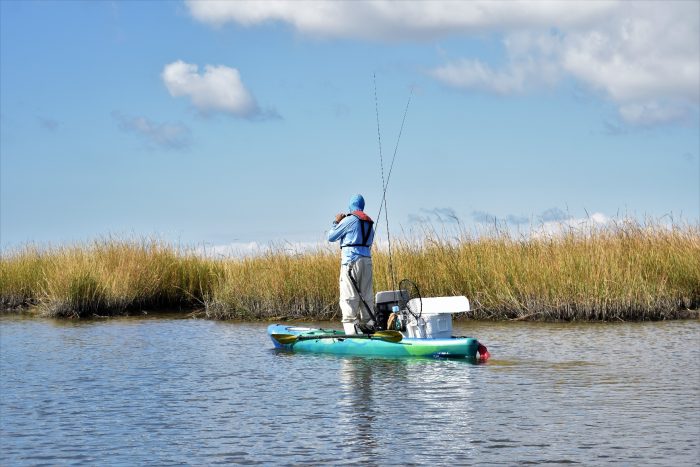 Kevin Searching the marsh for redfish 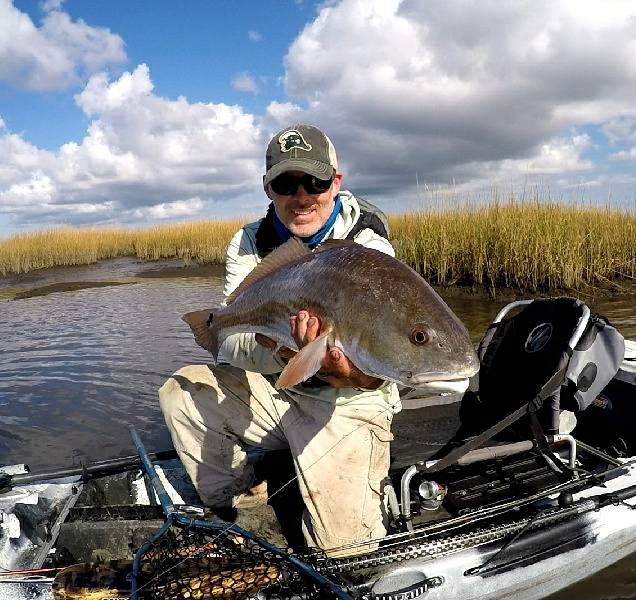 The morning started as expected, covered in mud and nearly dehydrated from combat launching two kayaks into the neighboring marsh.  But that’s the great thing about kayak fishing, if you’re open to a little work, access is open to interpretation.  It was a little too early for sight fishing so my fly of choice was a gurgler that I blind casted to fishy look’n spots.  The tide was falling slowly all day and it didn’t take long to find willing redfish.  However, they were only enthusiastic about the chase and only a few actually ate the fly.  Watching a red trailing your top water bug is exciting but the frustration of rejection is excruciating.  It’s like expecting to have a Coosa FD (https://jacksonadventures.com/blog/kayak/coosa-fd/) in June but not getting it until October.  It wasn’t long before the sun was high enough to sight fish those heart breakers.  It’s amazing how fast time can go when you’re catching fish and how slow it passes when you’re not.  Five hours had passed without a thought.  Kevin found me in the back of a pond and let me know he was heading out.  I thought about hanging around for another hour but I didn’t want to deal with that launch solo. 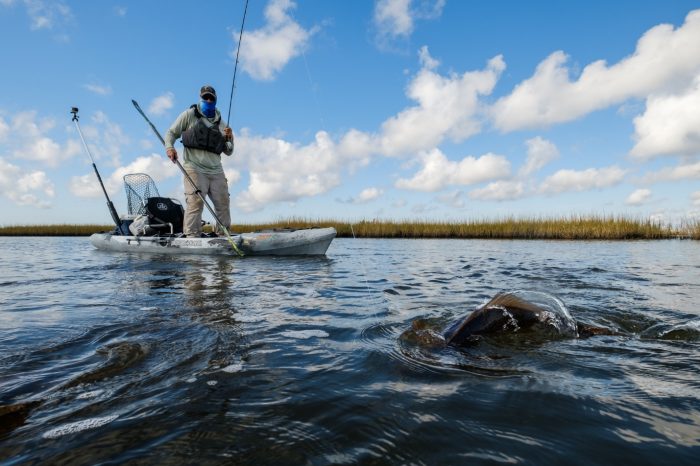 Much like the night before I was hanging around camp when I got a text from fellow Jackson Kayak Fishing Team member, Scott Myers, https://jacksonadventures.com/team-jk/kayak-fishing-regional-team/scott-myers/.  He lives in New Orleans and was interested in driving down and doing some fishing.  Again, no plan was the plan.  We agreed to get in touch the next afternoon and work out the details.  I hung around the area on Sunday and the fishing was pretty great.  Time had again slipped past my recognition.  It wasn’t until my phone started buzzing that I remembered I told Scott we would work out the details that afternoon and it was now “that afternoon.” 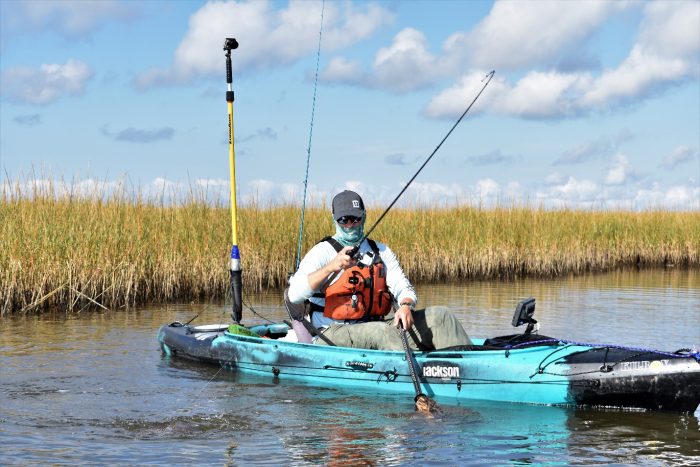 Scott with a slot redfish

When I checked the dozen missed text messages, I realized the plan for tomorrow was in serious jeopardy.  Scotts motorized kayak hauler decided it needed some special attention.  He was headed to Grand Isle when the check engine light came on and noticed a burning smell coming from the engine.  The last message read was actually a picture and something about repairs costing $1,000.  At that point, I figured the trip wasn’t happening for him.  I put my phone away and went back to fishing. 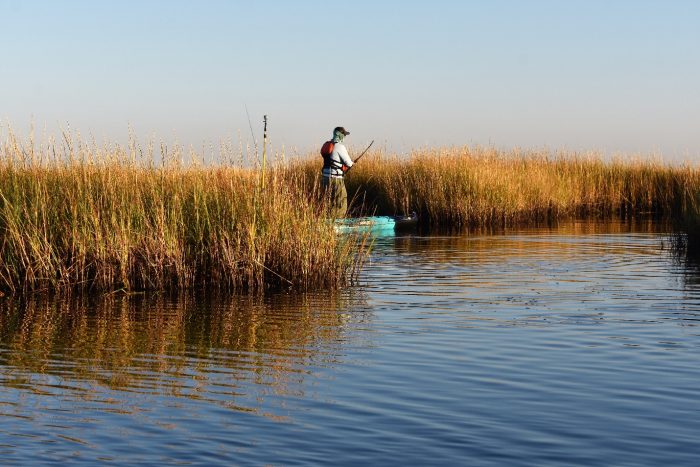 Scott searching the marsh for reds

An hour later, the phone starts acting crazy again.  When it starts going off like that it’s usually an emergency.  Turns out, it’s Scott and he’s got great news.  No one’s dead and he’s still coming down.  Less one AC belt that helps his kayak hauler turn hot air into cold air, but who needs AC in Southeast Louisiana?  Let’s fish man! 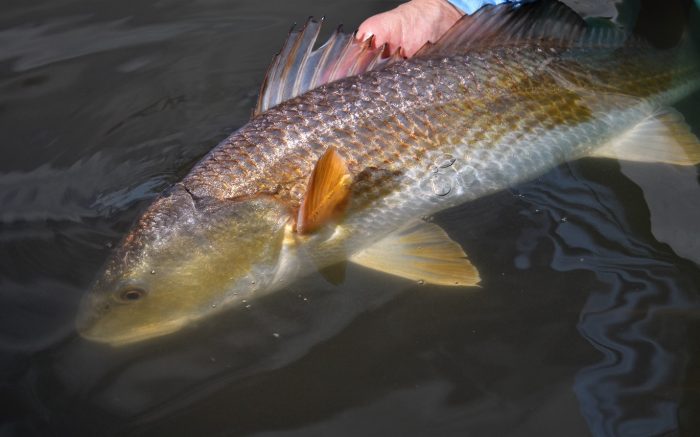 The next day was easily one of the best ever.  The conditions were excellent and we lost count of the total number of slot redfish we sight fished.  At one point, I was creeping down an island talking to Scott when I saw a big red swimming at me.  The fly actually landed a little long and snagged on some grass.  I was sure it was going to spook when I pulled it free.  The fish was already too close for a second shot so I left it.  I could hear Scott’s voice in the background as it closed the distance but my mind had refocused.  Time and sound became hazy but the ambush point was clear.  When the red was in range I pulled the fly off the grass and gave it a quick strip.  The eat was instantaneous.   It must have been the fish gods rewarding us for sticking it out. 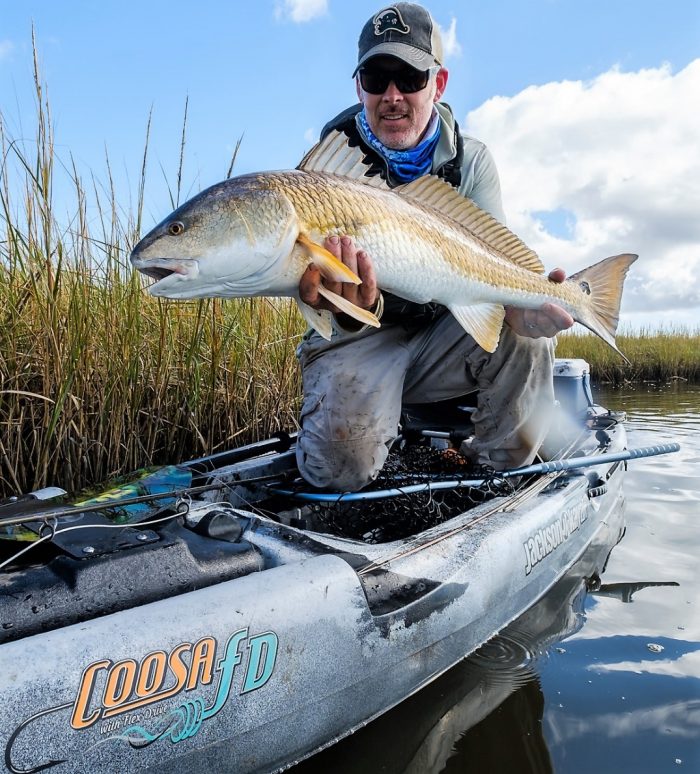 Nothing like the fight of a bull redfish on the fly. Pic Scott Myers