4 ways I use Torso Rotation

There is no doubt that your torso plays as big a role in paddling as any other factor. Not only does the torso help you rotate and spin the boat in freestyle but also gives up subtle turns while river running. Here are four ways I use my torso while paddling.

One of the first strokes you will learn is the Sweep. A wide, flat stroke that spins the boat. The paddle arcs through the water away from the boat creating torque while your body rotates to spin 180 degrees. Freestyle almost entirely consists of spinning the boat with the cartwheel, flatspin, helix, mcnasty, etc. So before attempting any of these moves you should take a good look at the Sweep stroke.
Firstly, look at where you want to spin! Let’s say you want to spin right taking a left sweep, so start by looking to the right. Not just with your eyes but your whole TORSO. Chest, shoulders, nipples, belly button, all of it pointed in the direction you want the boat to go. Then place a smooth, grippy stroke pressing on that left foot and your legs attached to your boat will have no other place to go but glide under the upper body to catch up. The end of the sweep leaves your torso fully rotated to the left while your legs/kayak rotate to the right. They almost exchange places.
The same thought process can be applied to your back sweep. Lead with your entire upper body and your legs (or kayak) will follow. And once your torso becomes the major contributor in the spin the actual stroke placement is no longer as necessary. Clean blunts and clean cartwheels use zero stroke. Instead, clever paddle placement and bounce off the wave conjoined with perfect torso rotation is enough to spin the boat 180 degrees. 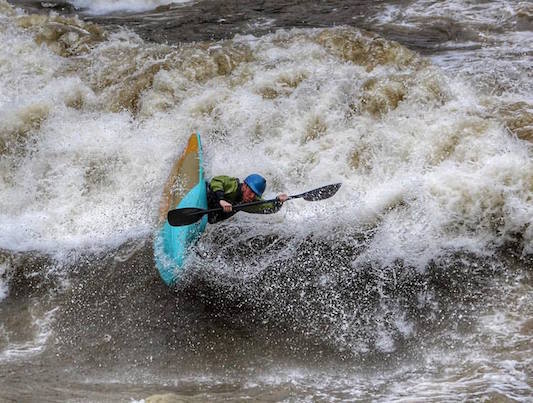 Looking up and to the right to clean blunt left. Photo by Guillermo Loria

No Eddy Turn is complete without proper torso rotation. Once the boat charges into, or out of, an eddy the incoming current will want to turn the boat. The paddlers main focus is staying ahead of the turn. If charging into the eddy to catch it; line up, charge into the eddy, look with your whole upper body (belly button and all) in the direction you want to turn, carve that inside edge, and BOOM the boat glides under you in the direction your torso rotated to complete the eddy catch.
Same with leaving the eddy. Focus less on whether to use a sweep or draw stroke to turn but more on charging into the oncoming current, rotating the torso ahead of the boat looking downstream, and drop that inside carve to arc the boat through the current making a buttery smooth transition on downstream. Torso should be priority number one while also using a sweep or draw stroke to manage the turn. Stroke, pushing on your feet, and all other contributing factors have nothing without the torso rotation. 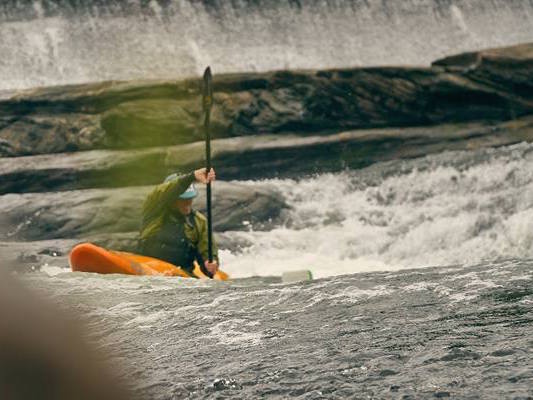 Making the turn at the Kanawha Falls Slalom Race. Photo by Cody Adams

Not all river features are perfectly squared up. Many ledges, waves, and holes run diagonal to the rivers direction. Taking a nice sweep to swing the bow perpendicular to the feature momentarily allows the boat to take on the feature getting on down stream. Otherwise the feature would take on you! So firstly square up your shoulders, chest, and upper body to the feature as you approach, then take that sweep so the boat swings towards the diagonal feature hopefully crushing through it. This will keep you in the flow and moving on downstream instead of the feature typewritering you off course.
I find myself sometimes coming at a boof a little sideways then swinging the bow with torso rotation as I boof. The swing momentum gives a little extra lift over the feature that you may not have gotten with a straight up boof. 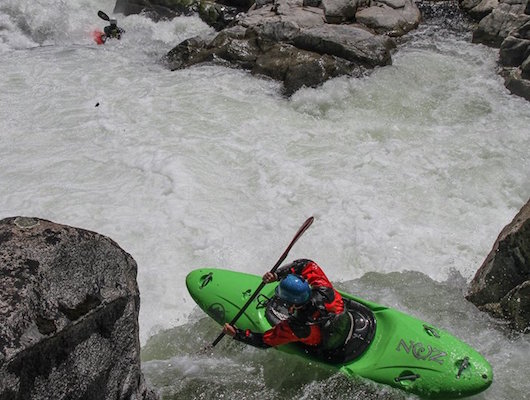 Swinging the bow through for the boof. Photo by Benjamin West

These old school moves have reemerged with boats now being designed with squirting and splatting almost entirely in mind. To get a stern squirt start by rotating your torso in the direction you want to spin as you enter or exit an eddy, drop that outside edge, then let your lower body/boat catch up with your upper body that is already rotating as the stern slices through the water getting you vertical. Try fighting to keep that torso rotated while you are vertical and your boat/legs will keep trying to catch up with your upper body slicing the stern, giving up a nice pirouette.
Splats never get old. Find a nice safe rock with a little current coming at it, approach a little sideways, rotate your upper body towards the rock first, slice your stern through, and unwind your torso to lift the bow up and towards the rock to splat. Throw in a back or front sweep to assist in rotating your torso and hang on for a ride down the rock. Splats are rarely done by paddling straight at the rock and just hitting it to go vertical. Rotating into the splat makes it way easier to get vertical.

Many days I will paddle only focusing on one specific skill and really hone in on it. So the next time you paddle spend the day really giving torso rotation some thought. From simply forward stroking to advanced freestyle the torso is super important to kayaking. 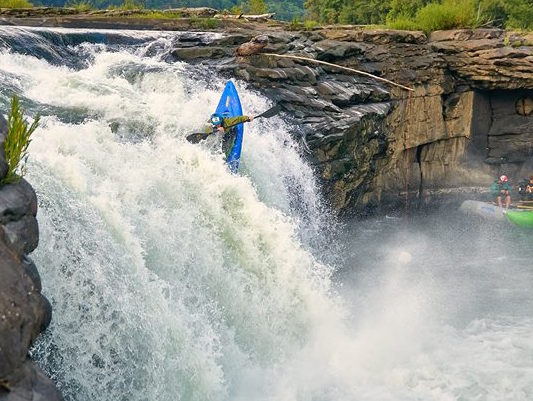