Lotte the Little Shredder checks in about her summer

This year I was lucky enough to leave the cold NZ winter and travel to Canada for the summer to attend the 2017 Keener program for session 1. This was my second year as a keener. I got to link up with a few of my keener mates from last year’s session and make new friends from other countries – being USA ,Canada and Ireland. I got to meet and get taught by some more world class coaches and have some of the best camp mums and dads ever. I learnt heaps of new kayak, life, and safety skills and also learnt a lesson or two about managing money after extensive shop up at Wallmart.

This year was a completely different experience on the river to the previous session I had. The Ottawa river’s water was at a height of 14 when we arrived on the first week and raised to 16 the second week. The Ottawa to me had transformed into a more exciting and crazy version of the river I knew the year before that was at a level of -1 and lower. These spring like flows created more crazy good waves on the middle channel like Angels Kiss, Butterfly, Upper and Lower No Name, Warm Apple Pie and rapids like Garvins at the lunch site. These high flows for the main channel however meant the big water got even huger, huge features disappear and are submerged under water leaving even bigger holes and waves to form. It was an experience and a half. I’ll never forget seeing the wonders of the Ottawa river. 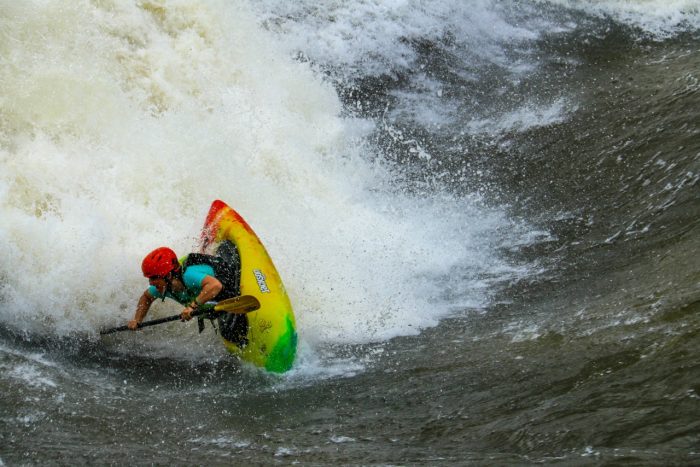 Bus eater was a dream. I had seen it in Stakeout videos and pictures but I’d never thought that I would ever get to surf it with the Keener program. The first time I saw the wave was like “WOW! that’s big, I see why they call it bus eater” and stayed hugged to the bank while paddling passed it. After watching a few paddlers surf, it looked smooth and surf-able even if it was the size of a small house. The first time I dropped in I was so nervous and was too far river left and missed it. This repeated the first couple of times I paddled down. The next day when I came back Stevo said commit to the middle and that’s what I did… and it was amazing! By the weekend I was getting pretty comfortable on it and was trying tricks, getting spins, round houses and the occasional blunt. When the river came up to 16 on the second week we were surfing Busey everyday and it never got old, especially when the wave would green out and I’d drop 3 meters down, with barley any control. On the second week while the first year keeners were doing swift water rescue the second years got to learn how to use the rope off the island, and after multiple failed attempts I was able to take the rope out for a surf. Another really cool thing about Bus Eater coming in was that heaps of real good paddlers were coming to the Ottawa for the wave and I got to see some huge tricks thrown while I was there. It was like watching a kayaking video but in real life. Bus eater was an awesome experience and I really hope I’m lucky enough to visit it again. 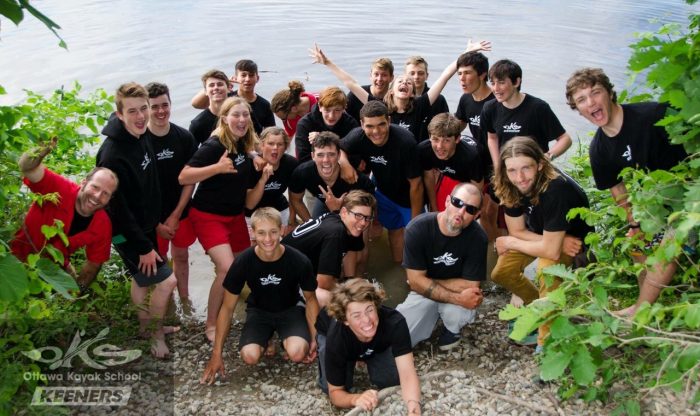 One of the really cool things about the Ottawa was that since the water had risen rapids were flowing that I never even knew existed and rapids I knew of and wanted to do were flowing. Some of my favourites were Dragon’s Tongue, Iron Ring and Elevator Shaft. Dragon’s Tongue and Elevator Shaft are part of the Garvins rapids. Dragon’s Tongue is in the centre and is a kind of like a ramp that has a small drop off at the end that I managed to mistakenly surf in my second run down. Elevator Shaft is kind of an underwater rockslide ramp/drop, on the far river right hand side of the Garvins rapid. The first time I ran this was in the first week and I had a pretty smooth way down and only felt a few bumps. Iron Ring is on the middle channel and is a rapid that feeds into this big ugly recirculating eddie and you have to get a real good line and push through to not get stuck in the eddie. After watching my fellow keener Nathan getting absolutely tossed in the eddie, I was pretty sure I wasn’t going to do it but with the slight thought of “when in Canada” and the smallest bit of peer pressure I did it and got stuck in the eddie. The good thing was I managed to get out on my first try and all was well.

This keener session was definitely the highlight of my year so far. I’m super excited because New Zealand is heading into summer now and in November me and my family are heading to Argentina to compete in my first World’s Freestyle event!