Shannon and I headed to Pennsylvania on Monday morning. We left Michigan at roughly 7am. Drove pretty much straight through to where we decided to camp. It was getting late so we through camp together and shot down to the take-out launch where we had found massive fish after the championships in October. Getting to the ramp with literally twenty minutes of daylight, we threw our boats off the trailer grabbed a couple rods and shoved off. In those brief moments on the water we caught 4 fish collectively. I also found out that I am completely lost without my roto grips. Grab food, sleep. 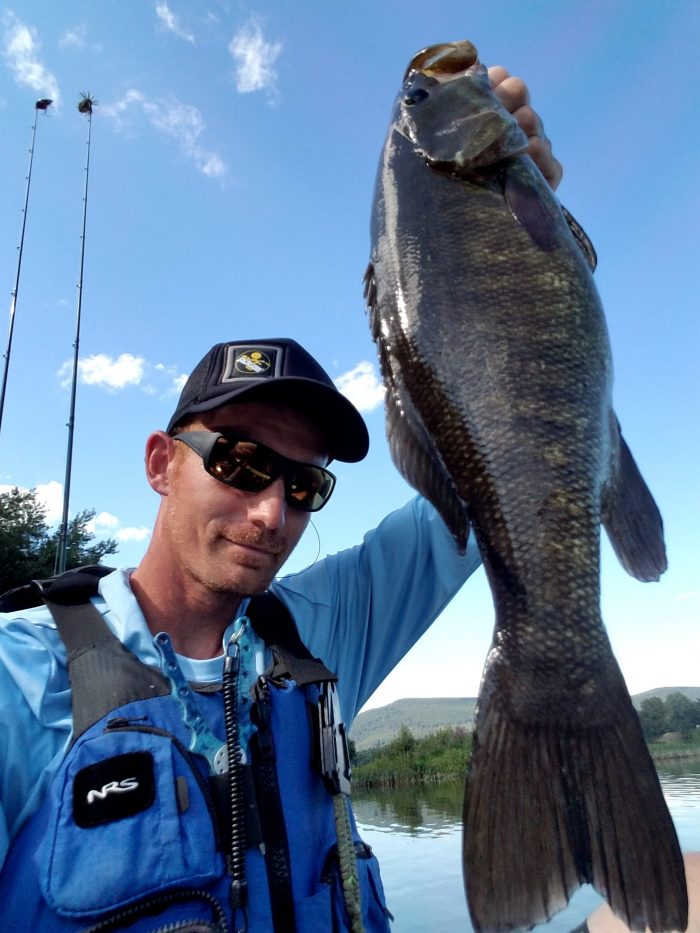 Wake up Tuesday morning with a positive look out on our section. Get up, grab breakfast, and head to the put in. Drop the kayaks, gear, and Shannon off there. I hop in the truck drive down to the take out. Get my bike off the trailer and ride 4 miles through the mountains to get back. We get on the river and the wind quickly changes directions and speed. Pushing straight up current. It got to the point that it was pushing white caps upstream. At times I had my drag chain all the way out and was being pushed upstream. It was a battle. Missed a couple hits, took about 7 hours to get to the end and we completely skunked. With that I was done with the spot. There was no way we could have caught that many fish in October and nothing now unless they were gone. We took off to a ledge system not too far down stream to see if the fish were holding there. I decided to drag above the ledge, Shannon below. I start dragging my yak up the side of the ledge. Shannon shot right out into a chute that flipped her instantly. After she yelled a few times I finally heard her. Saw the bottom of her Coosa, threw mine ashore, and started sprinting. I ran down and jumped in, couldn’t touch. I got to her and flipped her yak only to find her bear hugging all her gear to her boat. Glasses still on, paddle in hand, gasping for air. She lost maybe one lure. I asked why she didn’t just let go? She simply said, “we have a tournament Saturday, we can’t afford for me to lose it all”. Rain came in so we left the bike locked up and headed to camp. 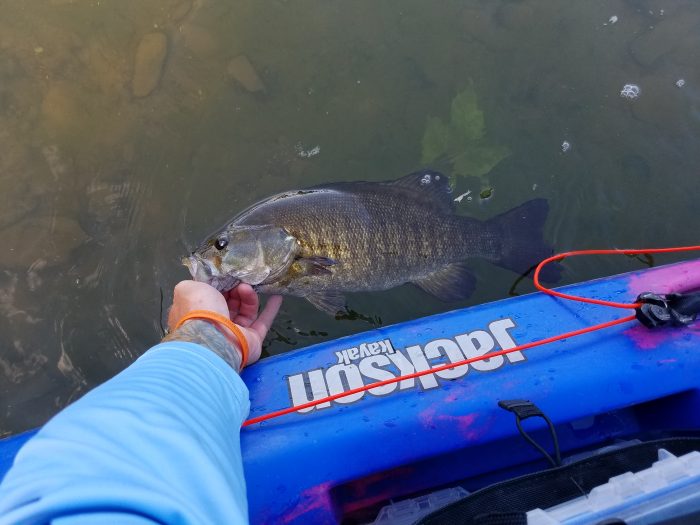 Wednesday, I wake up and want to head further south. Possibly uprooting camp. Shannon kept saying we needed to give it another shot. I didn’t want to. We get to where the bike is, she goes down to the water. Comes back and tells me the river looks different, we should give it a try. Already I know that I should give in if just to get it over with, right? I ask how does it look different? I go down and she points out that the water is clear, there are baitfish on shore, and fish jumping. I give in, unload gear grab bike and make the shuttle run. Knocked the bike ride from 25 to 21 minutes! We get off onto the water kind of late in the morning. After a bit Shannon screams and I come over. She had just caught a 21” beast smallie that she had lost off the grips. She was rather shaken up. We quickly figured out that the big fish were in the grass islands and peninsulas. Either push water or tail water normally and hitting top water. I ended up losing what would have been my personal best at the boat, huge fish. We worked the structure to our take out. In the end Shannon got 3 in the boat over 19”, and I landed 4 over 19”. I’m not sure how many 18’s but we were pretty sure we had our spot. Eat, sleep. 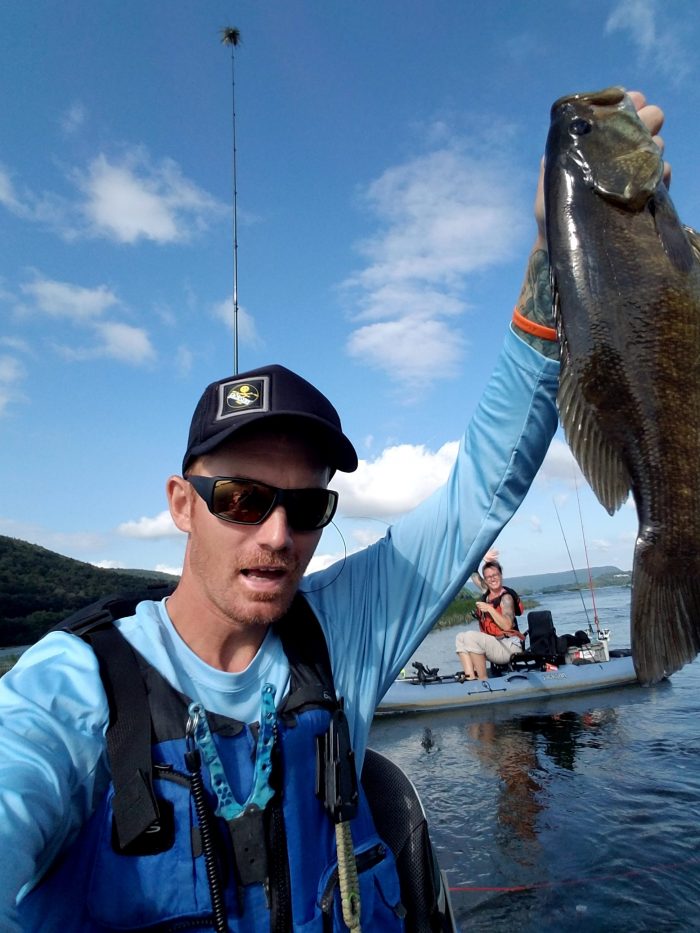 Thursday, we got up later and didn’t decide to stay at that campground until too late so we had to move our site. We packed up moved then went out to hit the water with our good friend Noah Heck. We ended up at a different area that had more rocks and boulders, less grass. That day we caught a few good fish each, Noah caught a bunch! But I did figure out that our pattern was holding, but learned a few new lessons on the way. Shannon was feeling under the weather so we cut out early. We headed into the nearest town to grab some food where Noah met up with us. Shared some laughs and a couple drinks then parted ways. I dropped a wad of cash in the restaurant at some time. We left went and bought some essentials, came back to attempt to find the money. They had it waiting at the bar, there is still hope for humanity! Back to camp to get some sleep. Clayton and Ken would be showing up late that night. 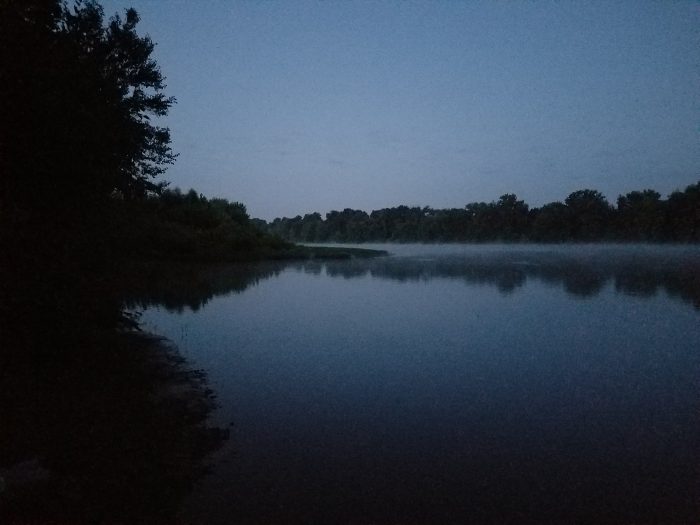 Clayton and Ken pulled into camp around 4am, they slept in their truck. We all got up early that morning and decided to hit the narrows in Dauphin. We put in I shot upstream to some grass islands and started to get hit right away. Pattern was still holding, we were still learning. Get down to the ledges and rapids where there was significantly more water moving through than in October. Shannon was suffering some ptsd from her flip earlier in the week. I could see I needed to get her down to the bottom. We worked together to get her down safely. I pushed back to the bottom to fish some swift water with no luck. I then set my sights on the lower islands. Made it down to them and got into some decent fish. Not as good as in our spot but solidifying what we had been learning. Head down to the captains meeting. Got a chance to meet some people I had only met online prior. We also met some new people and generally just had a good time. Back to camp, make plans, sleep. 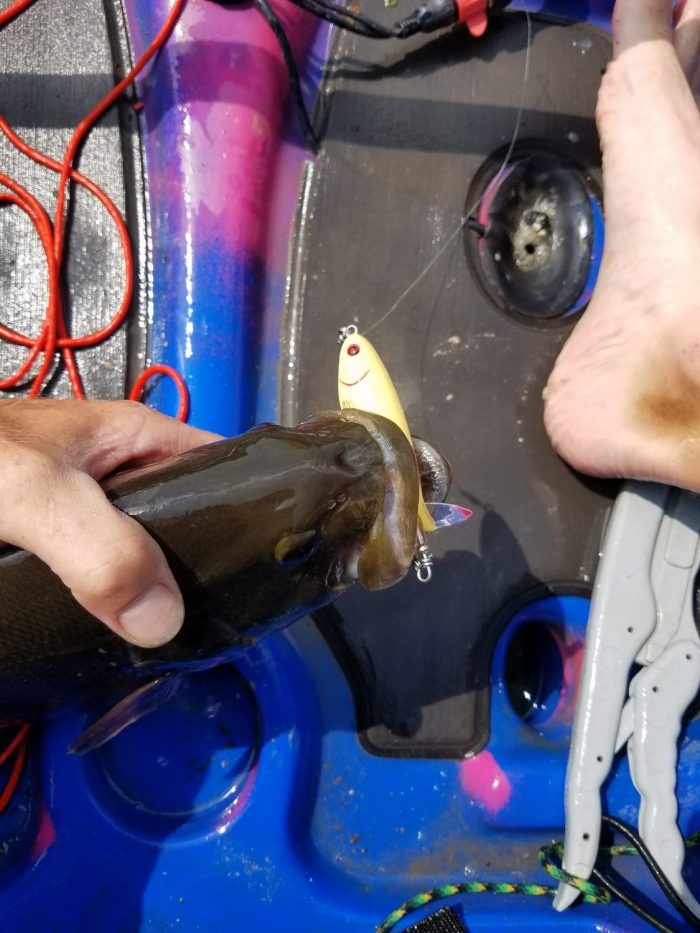 Tournament day. Get up earlier than you ever want to. Go grab breakfast and snacks for the day. Drop off kayaks, gear, and Shannon. Head to the take out. While I’m unloading the bike, I get a phone call from Shannon. This can’t be good, there was a boat heading toward her when I had to leave. Answer, she’s fine, but I have the paddles in the truck still. So, I strap both paddles to my bike. Put a headlamp on the back of my head turned to red and one on the front white. Head out on my 4-mile trip in the mountains in the pitch black. Cars don’t turn their brights off for bikes either. Get our stuff all set and wait for lines in. We get out and start fishing. Nothing. Nothing. Cast out into the open water catch a 10.75” or something like that. Smile for the camera, good bye, log fish. Ok I guess I’ll look. Shannon has 3 logged. I text and ask what’s the secret. She says “nothing, calm down, smoke a cigarette, the fish will come”. I don’t smoke! Cast, cast, cast. 16.25” that knocks a rod out of my boat that I jumped out to grab in waist deep water. It was a bit chilly that morning. I logged the fish while shivering like crazy. Shannon then reminds me that our pattern didn’t work unless the sun was out. It hadn’t come over the mountain yet. We are working our way down and she catches one on this island that held numerous fish previously. I yelled over to let me hit it quick. She yelled that its where she had all her hearts marked. Kinda mad I came around the back side of the island I was on, make my cast and WHAM! 19.25” hammers my plug. I yelled never mind I got this. At this point it was early and we were close to the end. I decided to work my way back up some chutes we passed. Catch a 20.5” and worked my way up further to another 18.5” that slid me into second. End up working my way back to the take out. We had roughly an hour before we had to be on the road. About a quarter mile downstream I could see what looked like a big island. No time to lose Shannon decided to stay and I was on my way. As I slow down on my approach I realize it’s a bunch of small islands. I head the push water on a few, anchor my kayak and wade up to a big rock overlooking the islands. Look around and I see what looks like the perfect spot. Fast deep water running right off the edge of the island. I creep up and make my cast. I can still see that pig shoot out of the grass and snatch my lure. As soon as I felt the weight on the rod I knew it was the one. Get him in and to the boat manage one photo before he self-releases. I then drug my boat to the launch and loaded up. Roughly 2 hours before everyone else had to be off the water. 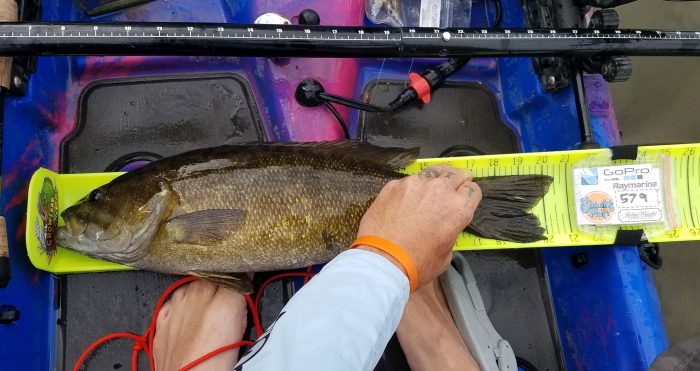 On the way back to the check in I had to keep telling Shannon I didn’t want to keep knowing what was going on. I was a nervous wreck, shaking, sweating. It was insane. In the end all our hard work paid off. Shannon landed tied for 9th place. I was able to hold onto the top spot. And we laid claim to top team as well. The award show was awesome, food was great too. But nothing matched the fellowship between all the anglers. By far still my favorite part. The next day we stopped at the susky for a quick good bye. I managed another 19.25” smallie that put me at eight fish over 19 that week. Truly a #Dreamweek. Till next year