Melea has spent countless hours fishing for redfish from the Big Tuna and the KilroyDT when she was younger and now out of her Skipper. We set off one afternoon to chase a less prominent fish in our area, the elusive Northeast Florida snook. 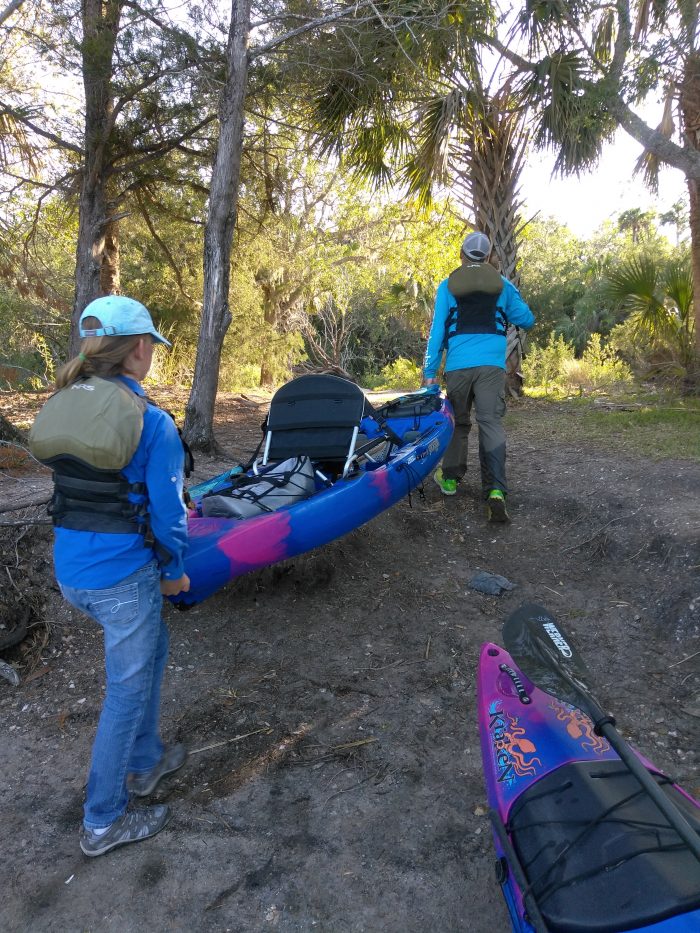 This would be a first for her on the species and there’s no better way to target these beautiful fish in our area, than from a kayak. 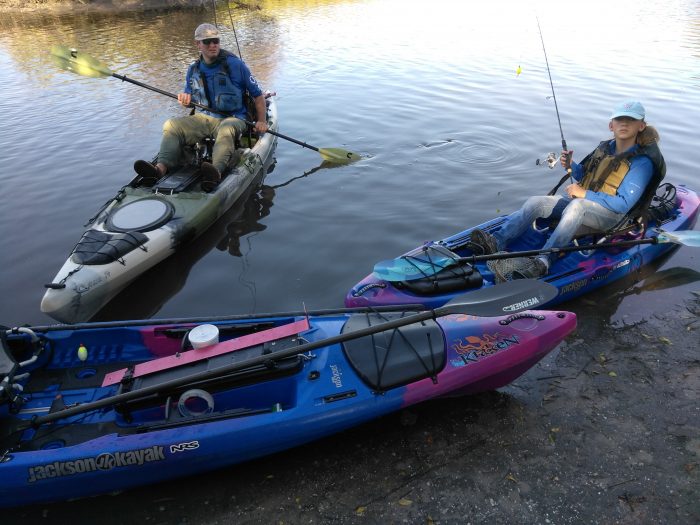 The snook that live up this far north are generally found in the extreme backwaters of the estuary systems. A lot of these areas are not accessible to power boats due to the shallow water and small canals that snook prefer this far north.
We started our adventure by meeting a friend, Ben Guise, at the launch around 5pm. We knew we had a good paddle ahead of us, plus a little bit of portage, to reach the fish. Melea had never covered this much distance on her own and we had a good conversation about how dad would tow her out if she needed me to. I wanted her to push her limits but didn’t want to push her too far. 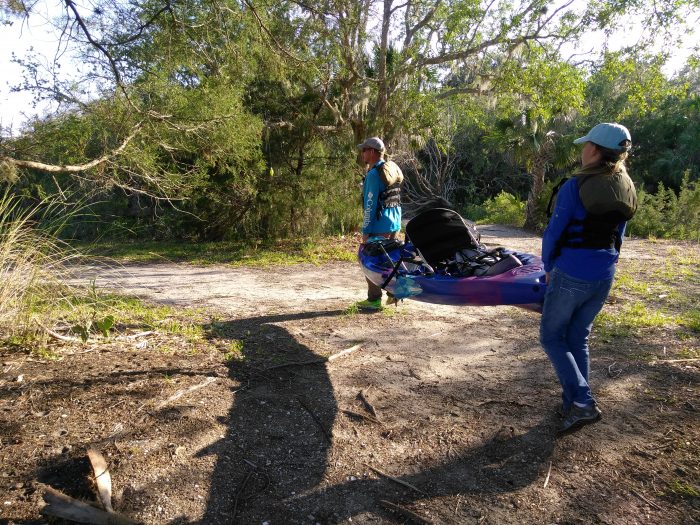 After the first mile we took a short break, had some laughs and portaged across to a creek that was supposed to be a short cut, to save us a few hundred yards of our paddle. About two hundred yards in we realized that the tide was way too low and it was time to backtrack. At this point the tide was dropping and we were running out of time. In the pictures you can see Melea pulling her Werner Paddles Camano directly through the mud, basically no water left. In spring we experience negative tides that with a good west wind are exaggerated and I had made a tactical error. The short cut cost us time and energy. 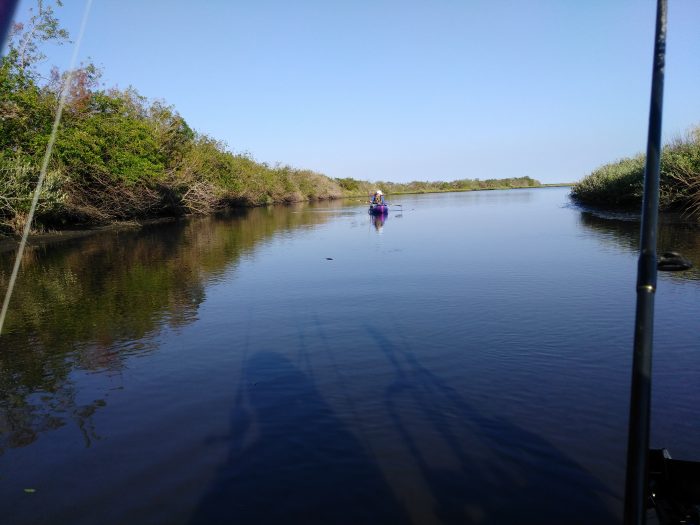 Then came the news that I thought might ground our mission. Baby girl had a blister the size of a quarter in between her thumb and pointer finger. After breaking out the first aid-kit and some snacks we were back after it! 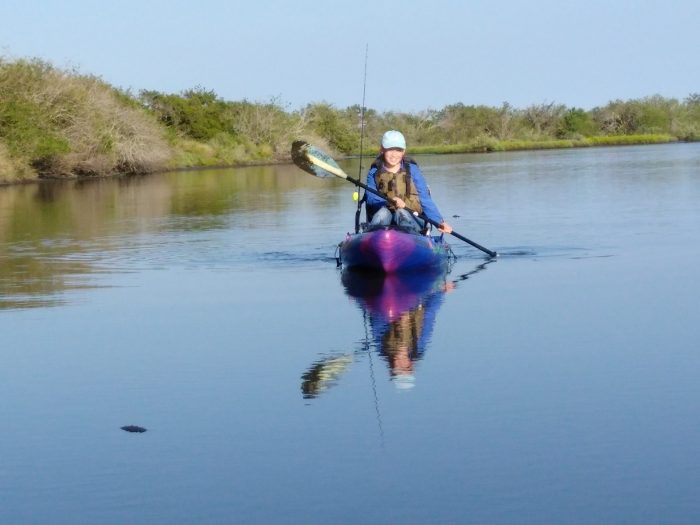 Unlike so many other times, when you’re hit with obstacles that slow you down, when we reached the snook’n hole over two miles in, the FISHING WAS DEAD. Yeah, not one strike for any of us. Melea stayed steady and once it was time to paddle back to the launch, she didn’t mention anything about being towed, so neither did I. 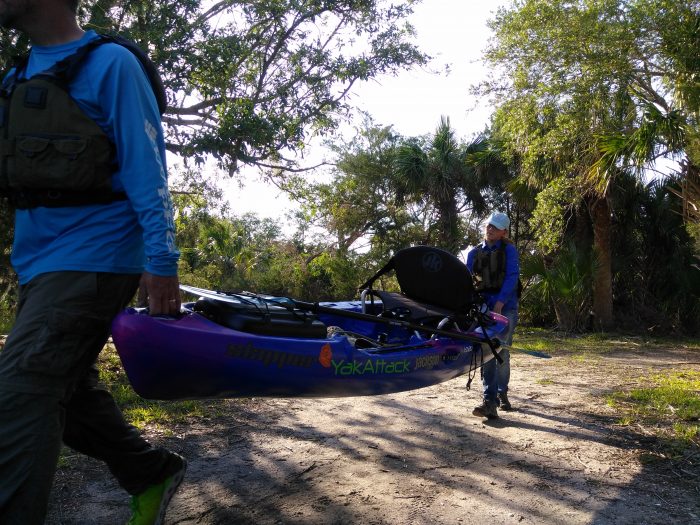 As we approached a sharp turn in the canal. In the twilight of the set sun we saw a good strike and bait moving on top. Melea put a perfect cast just off the edge of the action, using her Manley Rod. No sooner did the bait land, she had a good fish on. We all just knew it was a snook. After a good tow down the creek in the setting darkness, Melea landed a nice 26.5 inch redfish. A Personal Best for her, out of her own kayak. Just not the target species of the evening. Not only did a Personal Best hit the Skipper, a  eleven year old girl paddled over four miles and out fished two grown men. The Skipper has opened up opportunities for kids that I never thought possible. Matched with the correctly sized paddle, kids can really get around. 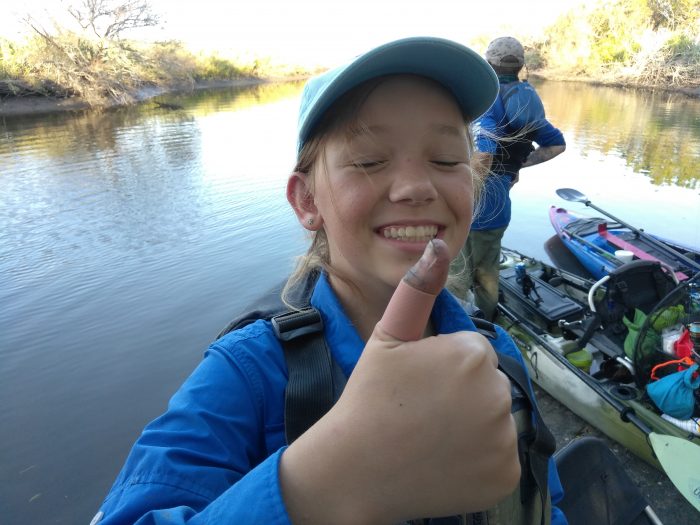 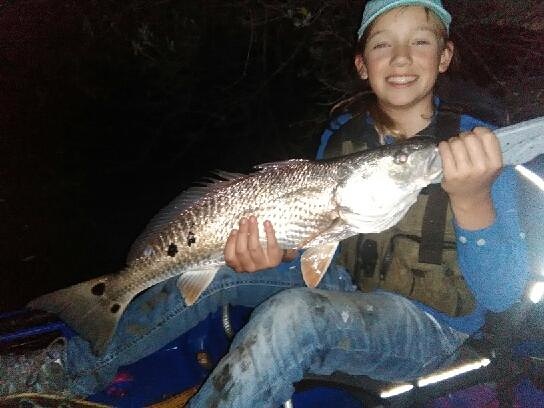 Stay tuned for more Skipper Snook’n Adventures from Melea this summer. The old line-siders may have eluded her this time but she is determined to get her one.