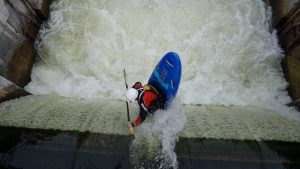 Double drop is located in the centre of Galway city, one of the canals joining the upper to the lower Corrib. Until last year, no one really thought about running it. Last summer, Danny O’Brien and Dave McClure posted a video a video on facebook of them running it in their playboats, and even throwing a freewheel off the second drop. Since then, everyone started to run it, in both creek boats and playboats.

We had a pretty dry winter this year, and double drop always works, so everyone in Galway was happy to run it every week, working on their downriver freestyle tricks. Double drop does not look nice, the hole between the two drops can be really sticky and no one really knows what’s at the bottom. Even though we ran it quite a few times, the adrenaline was there every time and safety was set up. 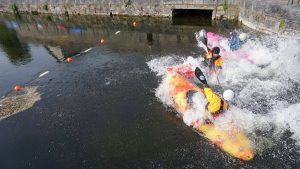 The Irish whitewater race league started at Crana fest in October last year. We raced on the upper Bandon, the Clare Glens, the Flesk and on Boluisce at Galway fest. Double drop race was the last race of the season! We all met in Galway on Sunday afternoon, and started the competition by a time race. Seal lauching from the bridge and finished a few meters after double drop. There was a good distance to paddle on flatwater, which left everyone with tetanized muscles when coming to the first drop… Team Jackson Barry Loughnane and slalom paddler Eoin Moorhouse both finished with the same time, but only one could win the race. We decided to do a boater cross, seal launching from the bridge above double drop, facing upstream. The racers had to turn around when hitting the water, and run double drop with pretty much no speed. Barry took the win, as Eoin hit his paddle against a metal bar under the bridge, got stuck between the drops and ended up swimming. Bradley Skidmore, Robert Kierans and myself also had to fight for the second place. No swimmer this time. I took the win, followed closely by Bradley, who nearly landed on top of me. Team Jackson Aoife Hanrahan was also present, and she is the only female paddler to have run Double Drop. With a great run during the time race, with which she would have placed in the men’s, she takes top spot in the Irish Whitewater Race League. 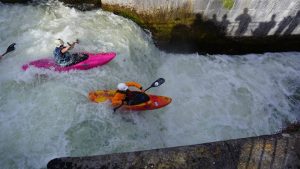 After training all year on double drop, we had to do a downriver freestyle competition! And the public was not disappointed! Ear dips, crossbow boofs, freewheels and reverse freewheels, everyone showed their style. Two laps were allowed, and only the best one counted. Myself and Barry finished 3rd and 2nd with a freewheel to back freewheel, and Danny O’Brien took the win with the same tricks, but also a paddle spin between the drops!

Thanks Aoife Hanrahan for editing the final video, and everyone who helped me organising, filming, timing and judging! See you next year?