Having beast whitewater surrounding you in all directions a rain storm away from running comes with its challenges. A normal workday with family responsibilities are then taken in stride between laps on class V and, recently, surfing the Dries. 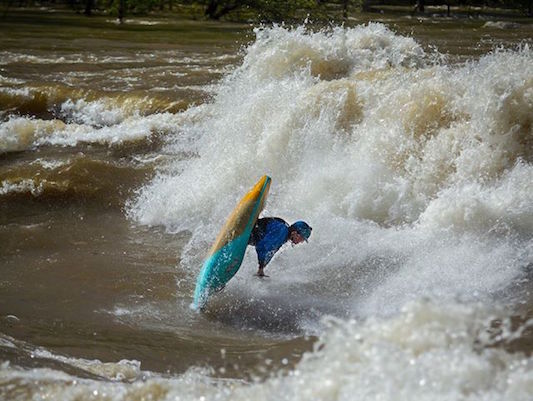 I went to bed Sunday exhausted from driving a few hours north to get a few Blackwater laps to get me through the work week as a teacher when an enormous storm rolled through the New River drainage. Refreshing the Doppler radar over and over I knew the Dries would be in all week.
Monday was spent skipping work to frantically tend to my wrecked truck, finding old tires to replace my brand new ones before the insurance hauled it off and possibly total it (don’t ask, stupid story). Finally found some old tires in small shop in Anstead! The river was slowly rising with over 50k cfs coming in from upstream. That evening was the perfect “Three Wave Level” with 30,000 on the Thurmond gage. I drove the few miles over the mountain beside Laurel Creek to see they were perfect with just a few stand up surfers going for it. No kayakers? Got some good runs, loving the Carbon Rockstar. Rockstar surfs with ease and sets up well to consistently nail tricks. The first of the three waves is wide and foamy allowing for easy set ups. I built up my confidence for the days to come. 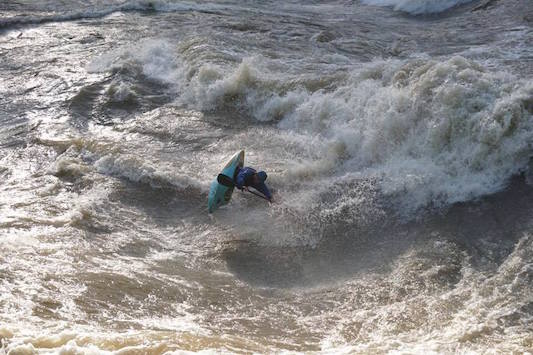 Get Up There. Photo: Josh Collins

Tuesday was going to be the epic wave level if the river didn’t get too high. Luckily Bluestone Dam was holding back the water releasing an even flow making the best, biggest wave form in the middle. I spent my workday realizing it was going to be perfect that evening, watching videos of us surfing it from years past to get pumped up. I showed up to find a bunch of buddies ripping and went straight for the big wave in the middle. There is no wave practice around Fayetteville that can get you ready for the Dries at 50k. So fast and big. I could hit tricks but am gripped, giving it my all the entire time. Nothing like the night before. Tons of logs and debris was washing downstream making it that much more scary! 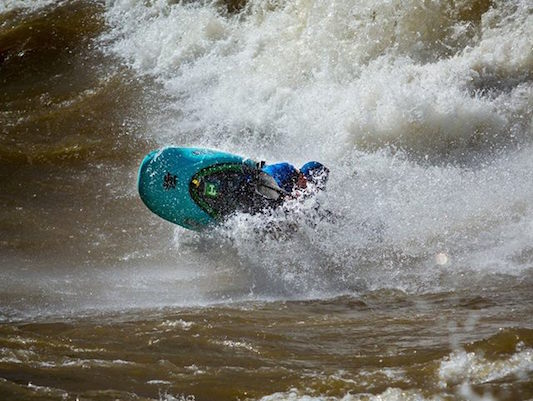 I can make it. Photo: Matt Smink

Wednesday rolled around and it was still at the perfect level. More people were showing up and Matt Smink was expecting to get footage with a drone. Veteran big wave surfer Adam Johnson was there getting giant airscrews. Caleb Adams was probing the middle wave for the first time, its scary. Josh Collins came in from being with his father in the hospital to this monster wave and immediately started throwing down. And a Dries newbie, Bryar Skinner, was out every day soaking up every chance to surf. Smink got the drone flying and we all lined up for our moment of glory. I went first and got my staple tricks along with Adam Johnson hitting a couple big airscrews captured from the air on the drone. 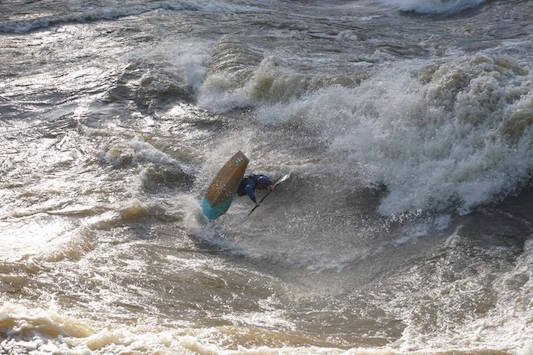 On Thursday I was whooped. I came home, took a nap, did some work, and got a message to do a dries run with Patrick Cindrich and Richard Perkins. We showed up and the middle wave was still in! So we blew off the run once again and surfed. I was way tired from the week I had but was feeling good on the waves.
Friday was a good day for the run. Only a couple miles long, it is full of catch on the fly waves and huge holes to dodge. It was fun to actually run the river. The waves all react and bounce off each other, so a slight change in the level can change the character of the rapids drastically. 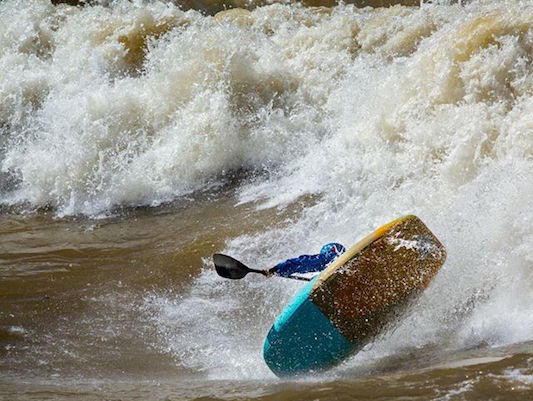 Saturday was back to the “Three Waves” level and I was way more comfortable. They felt slow after surfing at twice the flow all week. I was ticking off all the tricks I knew and going for those hard to get ones working my way up to them so one day they will come second nature! I was about to leave when young guns Edison Jones and Dion Carroll showed up ready to rip. They were going at it asking me a million questions and trying everything the could to get airborne. I just kept telling them to carve and spin. The tricks will come later.
WHAT A WEEK
Hope more people take advantage of these iconic waves as they are some of the best on the continent. Check the New River at Thurmond USGS gauge when there is water. If it is reading between 25,000 to 70,000 cfs then the waves and run are world class.