The excitement of hitting the road on the way to Erie for our Kayak Anglers kickoff event it made the impending cancellation even worse- I still managed to get some fishing in skirting some nasty weather which ultimately left my fingers and toes about half functional. A good time was had, and Erie is an amazing fishery but actual competition adds a different element to kayak fishing. For me, the added fun definitely comes with added stress and I’ll be the first to admit, that part is self-inflicted.

Luckily I had another opportunity to fish an event on May 20th and it was extra special for me because of two things; 1) it was a River Bassin Tournament Trail Qualifier so it was my favorite (river runner) style event, and 2) I wasn’t on the hook to run it! 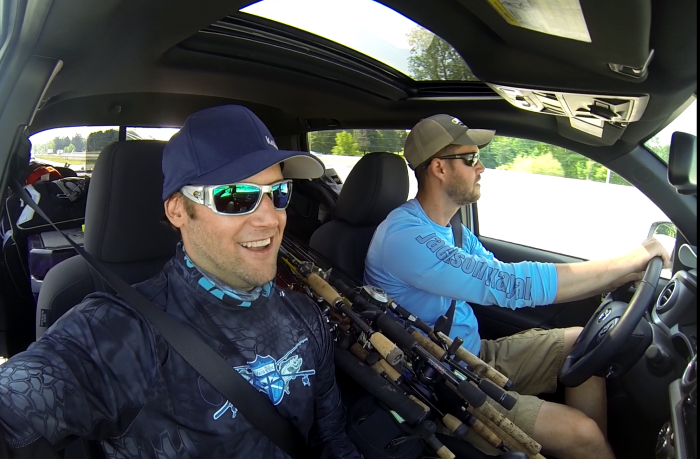 My friend Greg and I hit the road early on Friday morning from Pittsburgh, making our way west to Columbus with a simple goal- scout as many rivers and creeks as we could in about 6 hours. Locating new water is always an adventure and given the fairly high rainfall amounts locally, finding the few areas with clean water became our focus. We struck out 4 times in a row- we saw a person sleeping in a car at 10:00 AM with a smashed windshield, we saw chocolate milk flowing through the rivers (several times), we found one of the cooler dams I’ve ever seen and we waded in about 6 inches of clear water but couldn’t find a worthwhile hole (or measurable fish for that matter).

Before our 5th spot, we used our valuable time to do some more research on Google maps over a late lunch and found another option. Our fall back spot was quite a drive and right next door to the 40-mile outer boundary from Columbus. If we had to rely on it, we’d be going in blind because we weren’t making that trip two days in a row. Fortunately for us, our spot after lunch ultimately worked out well but we wet a line in three different places to find fish, two from shore and one after we launched the kayaks for the first time on Friday. It was literally a 12-incher from the bank that encouraged us to launch. That decision paid off big time on Friday for Greg with this 19” smallmouth that turned out to be our biggest of the trip. 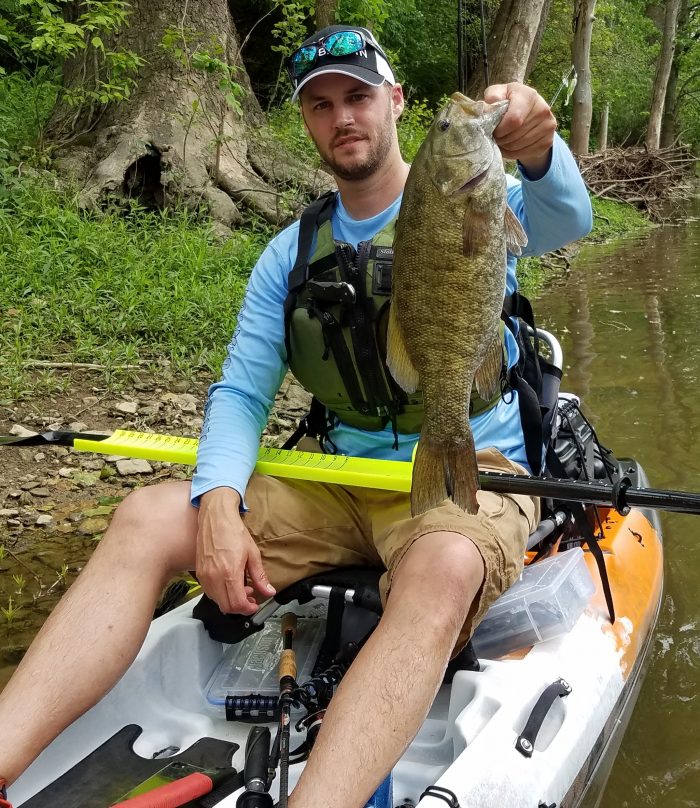 After trying a handful of techniques and getting a swing and a miss on a moving bait, I found a pretty specific presentation that put me on a limit of fish Friday afternoon. The bite was defensive, as expected, during the spawn and I left a few hungry fish for the next day in hopes they’d still be there. All was lining up, then the rain came. I would be surprised if it rained less than two inches during our roughly 2-mile paddle back to the truck. 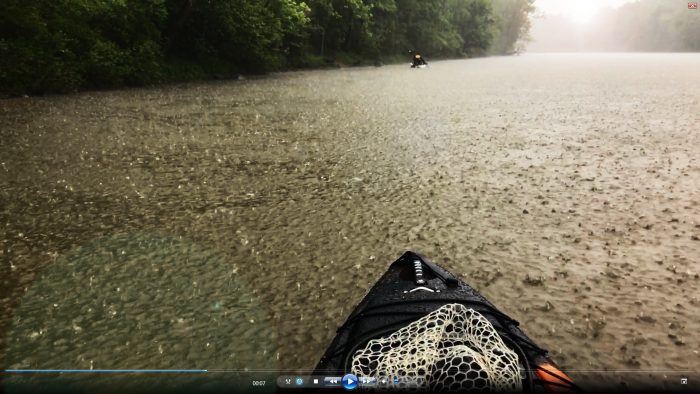 With the rain came a temperature drop of about 20 degrees. At 6 PM as we sat soaked in the car, the rain continued and it was time to find a hotel. Now, usually you’d do this before you drove to a new place. The Ohio State University kids were gone, the Blue Jackets were out of the playoffs so this should not be too difficult, right? Turns out “Rock on the Range” was in town, bringing roughly 120,000 people to Columbus and finding a hotel room became as difficult as a citation smallmouth. VRBO, HomeAway, AirBnB and every hotel we could find all led to disappointing phone calls but we finally found a gem of a hotel in the Nationwide Hotel and Conference Center north of the city. An awesome spot with a quality pub on site if you are ever in need… Luckily after about 4 hours of sleep, I woke up at 5:05 AM to the anticipation of a topwater bite and informed Greg of the time- as it turns out, his 4:30 alarm didn’t go off until Ken Morris was congratulating the winners.

All that and we still felt pretty confident with our plan- mostly because in this area we found grass covered, rocky banks. Sure enough, we arrived Saturday morning to find river conditions about the same as compared to the previous day despite the rain. We managed to launch about 30 minutes after the start time of 5:45 and made our way up river. I was on them quickly with Friday’s technique and had a relatively small limit by about 8 o’clock. I found a bunch of fish event day, but I had a really hard time culling my two 15s for larger fish. I had a really big one hooked but she evaded me right after I got a quick glimpse. It was a timid bite and I feel fortunate to have caught the fish I measured but it was not enough. I still found myself in 3rd place edging another angler out by .25”, and that was the differential between 1st and 2nd place as well. 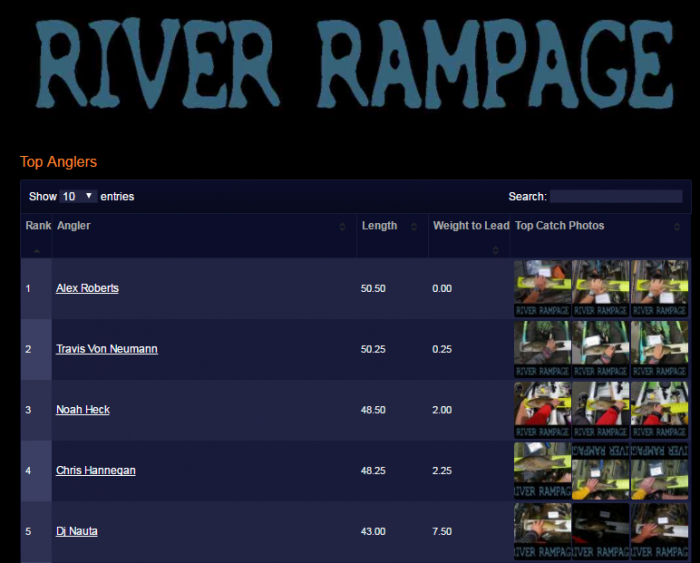 I had an awesome time exploring Columbus, meeting a bunch of new people, visiting our host Clintonville Outfitters for the first time and competing- I can’t wait to get out there to do it all again. The River Bassin’ style has a special place in my heart and if you haven’t given river runner events a shot, you might be missing out on the most enjoyable experience kayak fishing has to offer. 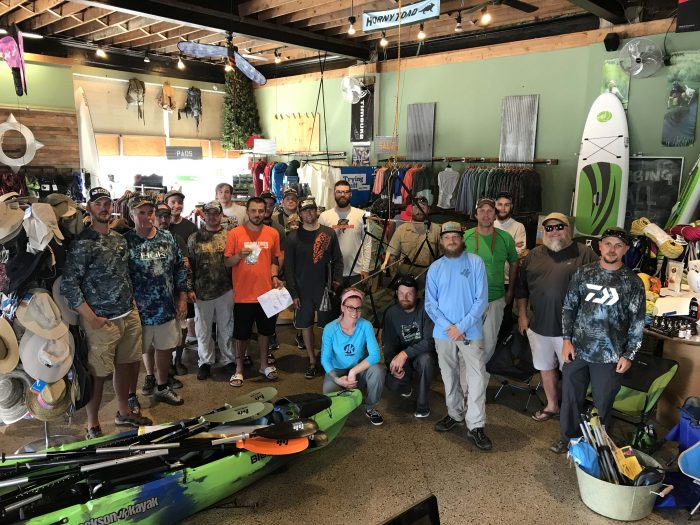