Guess what? We are in Colombus, Georgia for the National Freestyle Kayak competition. Almost my whole family is going to compete including Rowdy! It is going to be so much fun. I’ve been looking forward to this competition all year because it’s the first one this season! 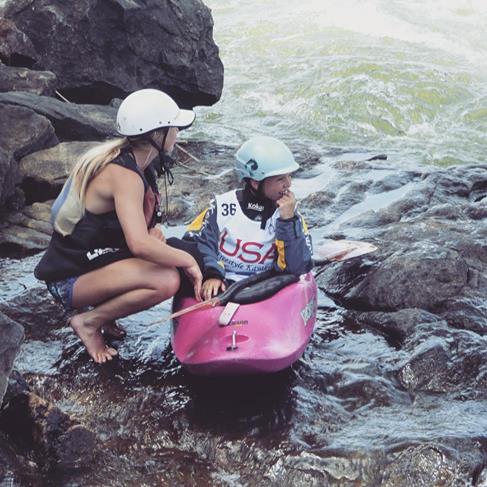 Columbus is a very cool place. The water is warm, the weather is warm, it’s a lot of fun to kayak here. In fact, my parents keep saying it’s the perfect place for everyone because we all have fun.

My little brothers and sisters can get in the water and paddle around in the kayaks, their SUP’s and even just swim in a huge eddy on the opposite side of the island from the waves. My parentand all the rest of us have fun in the all the different features on the Chattahoochee, from the crazy Cutbait hole to the calm Great Wave.

Rowdy and I started paddling on Great Wave, which is below the huge Good Wave. Everyone who lives in Columbus calls it the kiddie area. 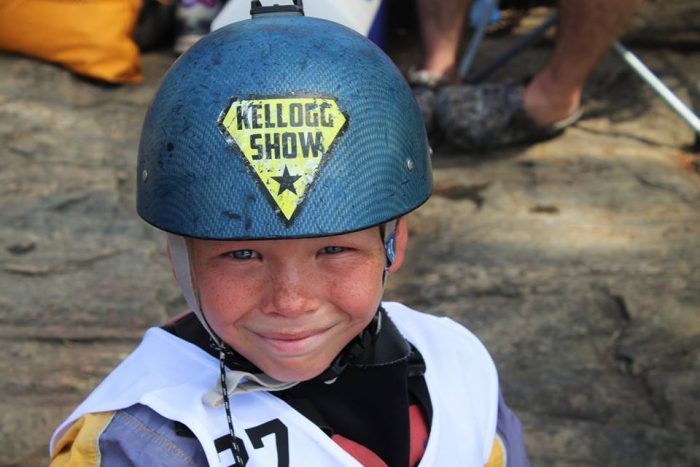 The competition is going to be held on the huge and crazy Good Wave, just up river, next to the island, so we decided we had to get some practice for the competition. Rowdy and I were kinda disappointed when we figured out it was going to be on Good Wave because it’s so intimidating. But Great Wave isn’t consistent so we just decided to conquer our fear and get on Good Wave.

The first day, I went down to kayak with Brody. On my first surf I dropped into the wave and it thrashed me around so much. Kenny was watching me from the Island and afterward he told me I did a Donkey Flip and a Panam!

But, while I was accidentally throwing these huge tricks, the wave took my paddle, so I just was hand surfing the wave in a side surf facing the left side of the wave, which is kinda sticky. I was pretty scared I didn’t know what to do so I just pulled my skirt and it flipped me. 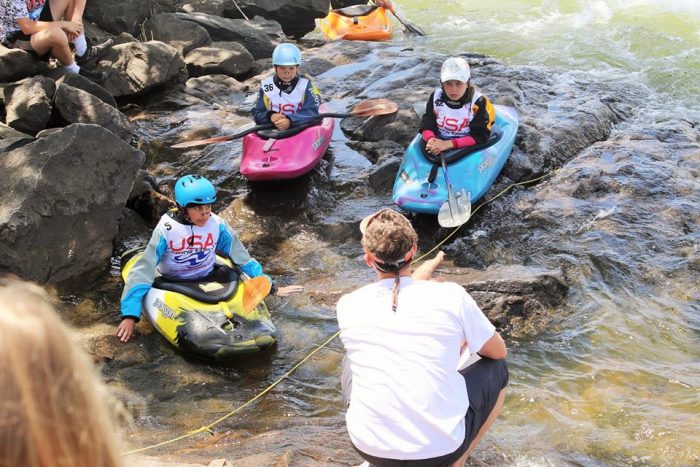 Brody grabbed me and took me to a rock and kayaked off to find my paddle, which was long gone. Tom Dolle, our friend and fellow JK boater, grabbed my boat, drained it and gave it to me. I hand paddled back to the side of the island, jumped out of my boat and started to run up to the rv to tell my mommy and everyone who was up there, but they were on their way down.

I was so happy no-one was mad that I just lost my paddle. They just laughed with me and mommy High fived me and said, “Yay, you bailed!” And we all walked down the bike trail to look for my paddle, but it was definitely lost. We hoped someone would find it, my daddy even paddled down to Tug Boat to look for it, but it’s gond. 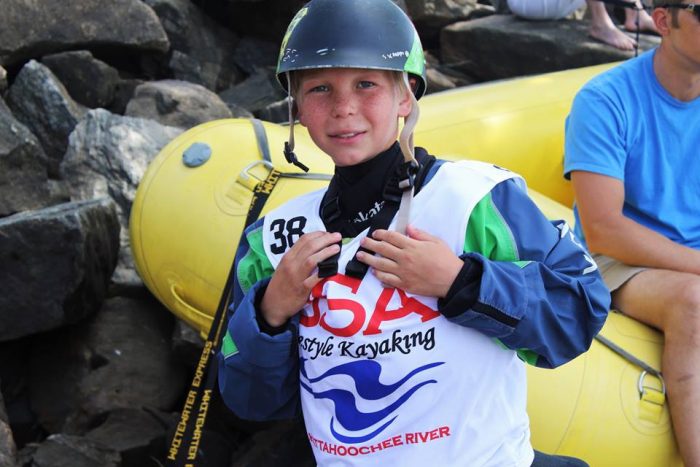 I’m decided I was gonna use Dally’s paddle for the competition. We practiced a few more times, Rowdy swam out a lot, but he kept on trying.
I was so excited for the competition, we were all laughing and smiling and just having so much fun. Kayaking is a blast with my family.

The next day was prelims, only Rowdy, Cardy, Kenny, Dally, and Brody competed because their classes had a lot of competitors and Kady’s and mine had 5 or less. They all made it to finals, even Rowdy. He threw a huge blunt, it was amazing. He was going for a Roundhouse, but he got such a great bounce that it turned into a massive blunt!

The next day was my turn to compete. Cadet girls were first. I was SO excited, but kinda scared. I got my boat and gear, brought them down to the wave, and put them on.

Everyone was coming up to me and high-fiving me, and wishing me good luck. One woman asked if I was a Kellogg and she asked if she could take a selfie with me. We were laughing and she was super funny, I liked her. 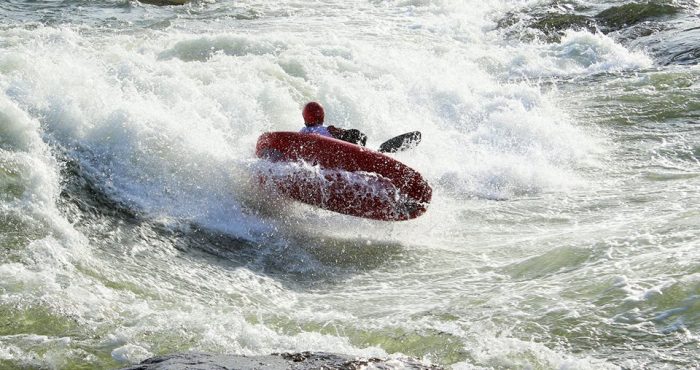 But, anyways, after that I got in the water waited about ten minutes. Clay Wright came over and talked to us and the judged announced the heat line-up. I went second. My first ride, I don’t think I got any points because I flushed early. My second ride was great. I got both spins, and kept trying for a roundhouse, but I got totally window-shaded, I rolled up and got window-shaded again again and again. Finally it flushed me out. I rolled up I was so tired but I was not scared for some reason. I was in first place after this ride. But there was still on more ride for everyone.

Unfortunately, on my last turn I missed the wave entirely and Maddie Kimmel did great and she won! I was totally stoked with 2nd because I had so much fun out there. I got out and ran to Mommy, she hugged me and told me she was proud of me for doing my best. She is the best Mom ever. 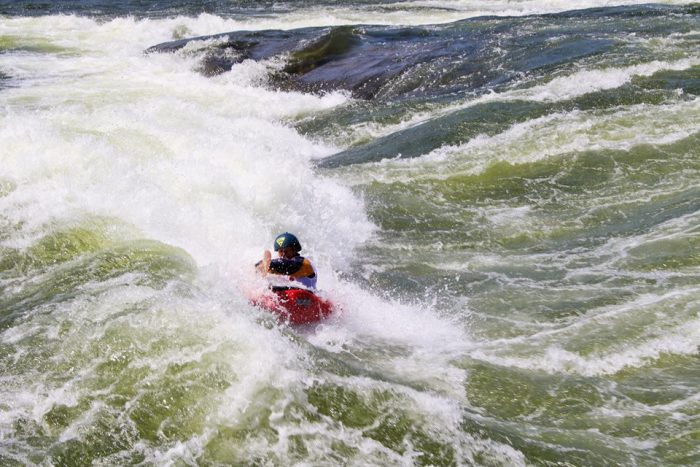 After cadet girls, it was cadet boys and Rowdy and Cardy’s turn. They both did awesome. Rowdy did three surfs and didn’t swim one time. He was so happy and we were all really proud of him.

Then, Kenny and Dally competed in Jr Men’s. They did so so well, I’m not joking they did awesome, but they say they didn’t have good rides, but I would love to have their rides.

Then, Kady competed in Pro Women. She got so many tricks I don’t even know their names, but the crowd was cheering, super loud. She won 2nd place, just like me, which is so awesome.

Then Brody was in pro mens. I think he was the best pro men, there. Totally everyone in my family did awesome and had so much fun. Kayaking is just the best. It’s scary and fun and exciting – there is nothing like it. And when you get to do it with your whole family, it’s even better.

After everyone was done competing we went to the rv and left to awards. Girl cadets were announced, Maddie Kimmel got first Place I got second Place (I was so happy), and Julia got third place. 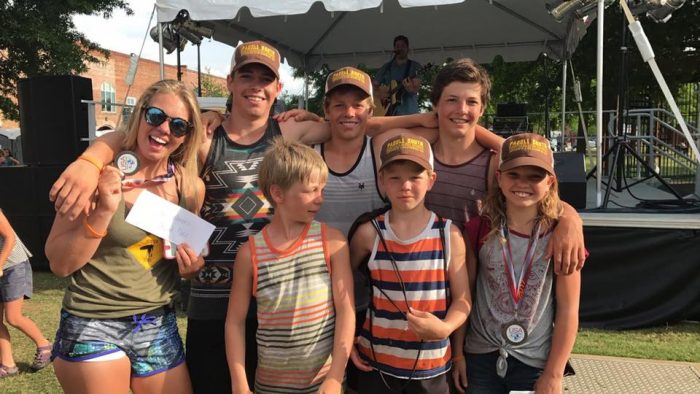 We took pictures, I won a water bottle, some stickers, and a free 8 oz frozen yogurt from Freeze Frame in Columbus. So cool.

Then boy cadets were announced, Rowdy and Cardy didn’t make it on the podium, but I think they should have. Kenny and Dally didn’t either, dumb again, neither did Brody, but Kady got second place too.

But really, no one cared. We had fun, so much fun. And, that night we put our helmets on the dash of our rv and we went to sleep. When we woke up, it was Easter. We went to mass, then came back and ate candy, and the Easter bunny hid the eggs while we were at church. Then Donna Madlock put together a huge Easter egg hunt just a totally awesome event!

Now we are off to NOC to compete in one of my favorite holes. Happy Easter everyone.

And we lived happily ever after!