Time spent in the Columbus whitewater park in Georgia, was super enjoyable but the weekend brought a release of a so called “South East Classic” the Cheoah river.  So Brooke and I loaded up her #TruckLifeTour truck and rolled out of the car park/Gpysy camp we had been living in, along with pretty much everyone else who had been there to head north into North Carolina to arrive at the Cheoah river in time for a Saturday release. 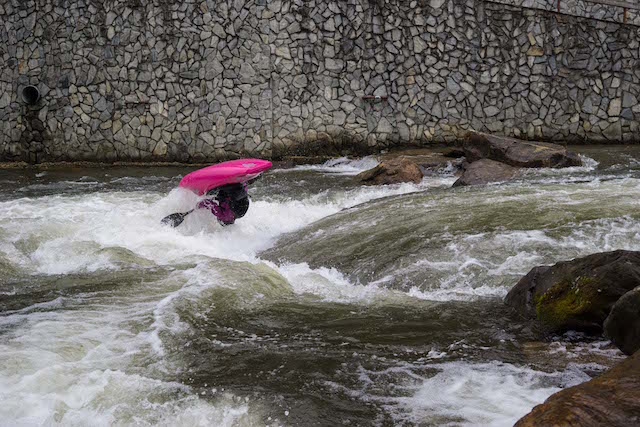 As is the norm on #TruckLifeTour so far I have had no idea about what we are doing or where about we are going, what the river will be like or any other information like that.  Brooke hadn’t been to the Cheoah previously either but I guess she had been reading about good stuff to do in the South East on American Whitewater and this one had been highly recommended.  On the drive up we managed to stop in for a quick oil change and get a shower at some kind of public tennis centre in Atlanta, AWESOME! We arrived  at the river around dusk on Friday evening and drove along the river for some time before arriving at the takeout.  As we drove along I thought we must have been driving along the tributary to the river we were going to, from the truck we could see plenty of wood, root balls and sharp rocks abound.  When we arrived to the take out to find many other South East boaters I was shocked to find out the small, rocky, very woody stream we had driven by was actually the river we would paddle the next day.  But they all assured me that once the dam released it would be a different picture.  I thought fair enough, no sense in rushing to conclusions. 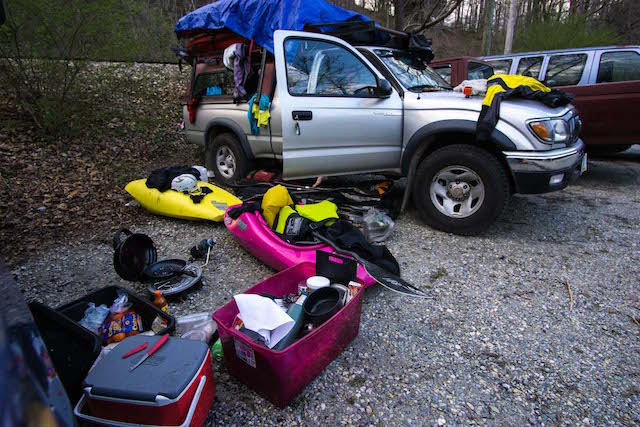 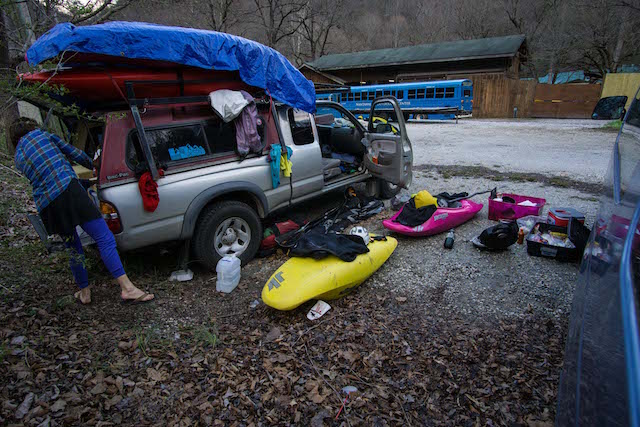 Morning came after a rough nights sleep.  The cause of said rough nights sleep was Brooke and I’s laziness when we arrived and parked the truck.  Although we had a fairly level spot front to back we weren’t super level left to right and some time around the middle of the night Brooke woke me up in something of a panic that the truck must be sinking and we had to switch sides (implying that I am carrying a little winter weight which may or may not be true, either way I was on the downhill side). In my tired state I just said ok and awkwardly switched sides of the truck bed.  This improved my situation considerably as Brooke has the better mattress. The other thing which we didn’t take into account when we parked was that we were right under a street light which lined the take out road as it ran alongside a small lake.  So as well as a mid-sleep move We weren’t quite able to position ourselves with the light not in our faces all night.  Obviously in the morning we found the truck was totally fine and the slight change in Brooke’s equilibrium whilst she slept had lead to her having this weird sinking dream. it’s not like we were parked in quicksand.

Next morning after a wicked breakfast of boxed mac n’ cheese (Brooke chose/made breakfast but it turned out good) we headed up the put in of the lower section of the Cheoah.  The river has two different sections, an upper class 2/3 section which stretches approximately 7 miles and a lower section of class 3/4 which goes for around 2 miles.  The section was more class 3 than 4 but had a few bigger rapids. On the whole a really fun continuous length of whitewater with few gaps or stops.  I would have described the run as low volume but I guess that is a relative term as fellow Team Jackson kayak Garrett Madlock told me this was pretty much a big water run in the area. 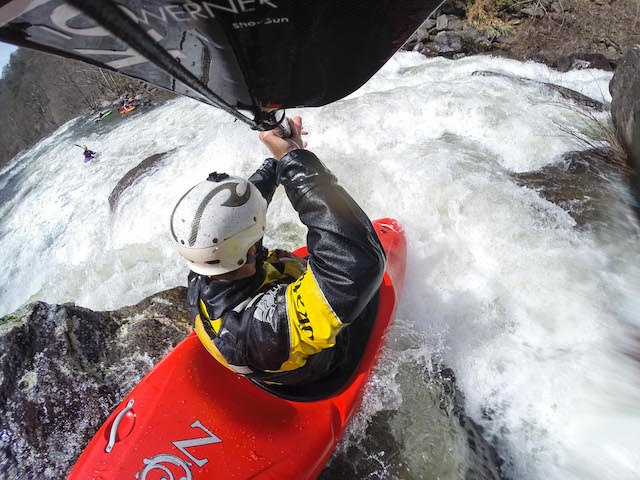 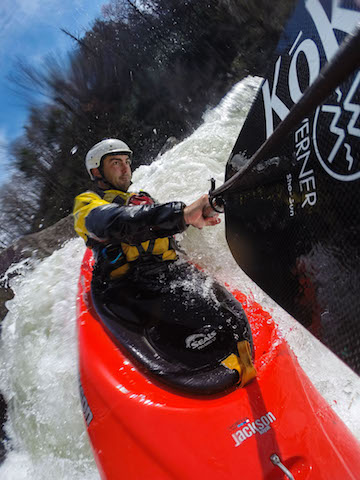 Organising shuttle and setting one up takes more time than running the section but we still managed to jam four runs into the day with plenty of time to spare to make tracks to our next destination, site of the 2013 Freestyle Kayak World Championships Nantahala Outdoor Centre (NOC). 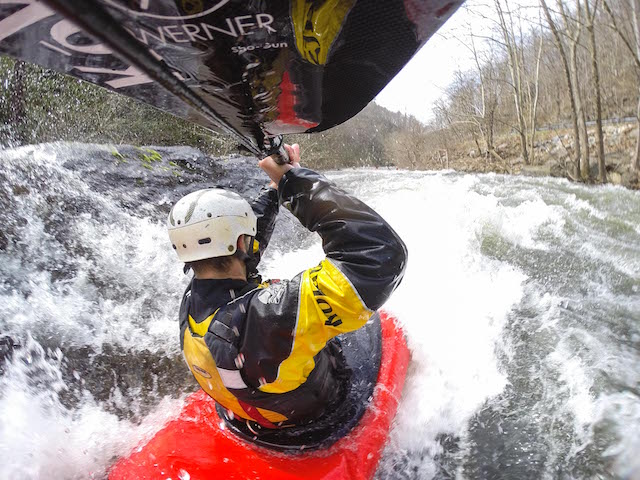 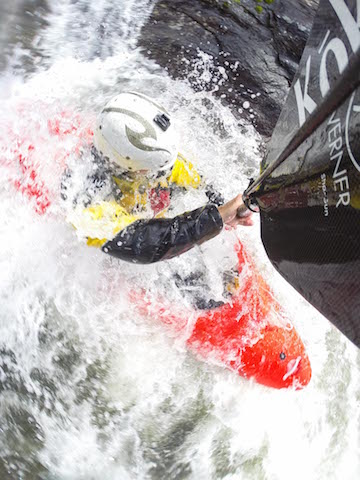 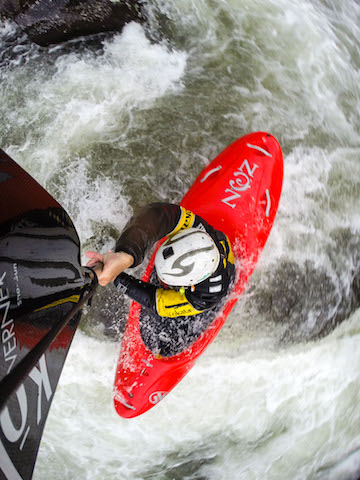 A quick 45 minute drive over to NOC after a bite to eat a mediocre Mexican restaurant and we arrived at NOC in search of somewhere to set up camp for a couple of nights.  We found a suitable spot around the back, nestled in between rafting busses which rested dormant, waiting for rafting season to get started again.  (N.B I am not sure if it is ‘cool’ setting up a little camp spot here but since nobody from NOC came and told us to move along I imply that we were fine, but as always take care in choosing where to sleep)

That night I slept pretty well as I had paddled a decent chunk of the day.  But heavy rain in the night brought a new set of problems for TruckLifeTour.  The cracks in Brooke truck topper hadn’t magically disappeared and at the first hint of rain Brooke, (or so she told me) was out of bed and putting a Tarp all the way over the back.  Some rain had penetrated the back of the truck and the edge of our foam mattress were a little damp but on the whole Brooke’s middle of the night tarp move probably prevented the worst of the water getting in.  She told me she had stayed up for a while to keep checking on it but I slept on pretty much blissfully unaware.

I made coffee the next morning (Sunday) and made Brooke’s a little stronger after hearing her heroic tale. We spent the morning catching up with Ottawa Kayak School student Maddie Kimmel (age 12) and OKS Keener Kaelin Friedenson who were both slalom racing in the Junior division of the US open which also taking place on the Nantahala river that weekend.  After seeing them on their first runs we headed down to the freestyle hole to crush out some much needed training. 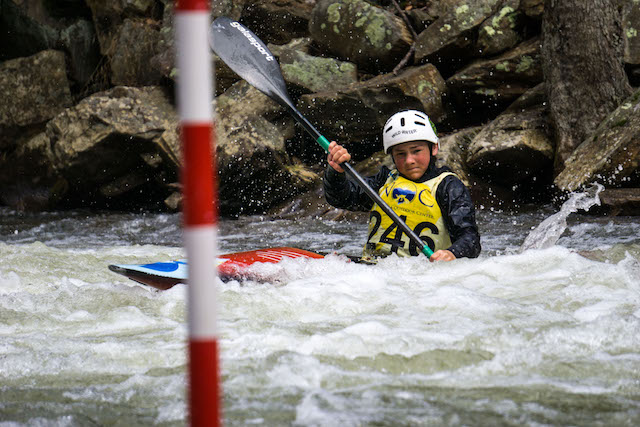 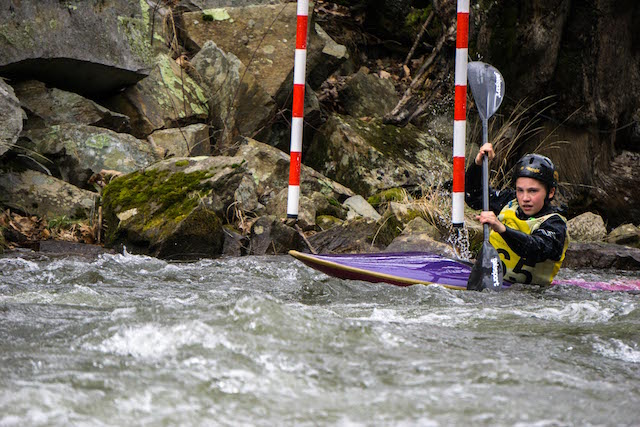 After paddling the ‘Workout hole’ In Columbus I felt like I had lost a lot of my hole boating skills but I did not feel as bad after paddling the NOC feature.  Whilst it had its own set of challenges to acclimate too I was able to remember at least how to do all the tricks I used to be able to do, although granted after a winter of not hole boating I certainly had lost that sharp feeling that I usually have in my playboat.  Mostly my tricks were a little sloppy and my pace was way off but the foundation was there so I am optimistically looking forward to training more and smartening up my hole boating in time for World Championships in Argentina this November.

Monday morning we had planned to paddle at Eternity hole but after finding out about a levels change at 7am we stayed for one more days paddling at NOC.

#TruckLifeTour continues, check back in soon for another update.