Little Shedder Holden: First Day Back Out Onto The River

April 22 is the first day this year that I have had the privilege to get back out onto the river. I would have much rather been on the river this winter but I injured my ACL playing lacrosse. So I was not mobile for a few weeks.I was more eager than ever to get back out onto the water and start kayaking again.
My friends and I loaded up our gear and got on the road for a weekend filled with fun at the Ocoee River in Tennessee.We made the mistake of not bringing any fulfilling food like a sandwich for example instead, the only food we had was about 3 boxes of clif bars and loads of candy. So for the next 5 meals that’s all we had for food.
When we got to the campsite we set up our hammocks over near the river and started a fire. We pulled out our boats out and started outfitting them for the next day ahead of us. Most of us had grown an inch or two since we last kayaked which for me was in December so we had to take out a lot of foam and maybe move out seats back a notch or two. We got in our hammocks around 9:30-10:00 and went to bed soon later.As soon as I woke up I packed up my stuff and ate a nutritious breakfast consisting of mainly Clif bars and a few candy bars.
The good thing about our campsite was that it was right on the river so we ran shuttle and slid right onto the river. It wasn’t much of a flat water paddle too the dam where the the real whitewater started. It was awesome being back out onto the river kayaking and doing what I love. It had been so long and I forgot how much fun it was, especially when it’s sunny out and your with your friends there really isn’t anything better. The levels were pretty good as well. Hell Hole was a little flushy but the top wave above it was really nice for surfing. 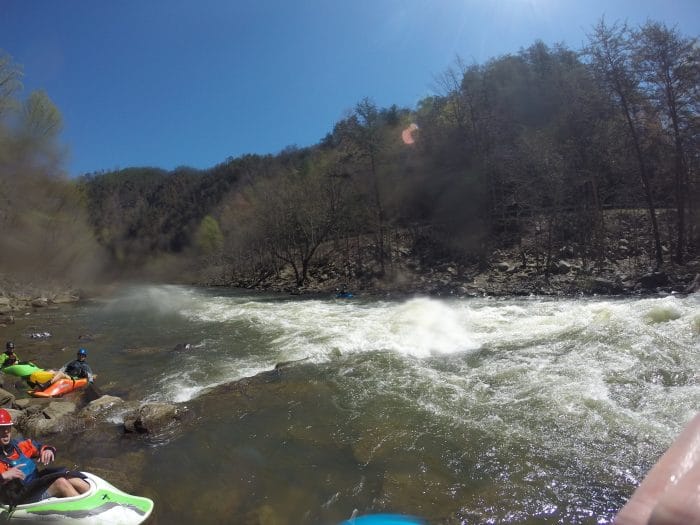 My friends also thought it would be funny to pull my skirt and try and make me swim above a rapid called Cat’s Pajamas. They succeeded with pulling my skirt and filling my boat to the max with water but luckily I made it to the middle of the river before I got stuck in the sticky hole at the bottom. I flipped at the end of the rapid after going though a small hole and I rolled up. But my boat was totally submerged under water as I was struggling to get to the edge of the river. So I jumped out of my boat so I wouldn’t go down the next rapid in the condition I was in. I desperately needed to empty out my boat so I was swimming with my boat to the edge of the river to empty out as soon as my friends started yelling “swimmer, Holden’s swimming!”. So apparently I swam, according to my friends. But Overall it was a great time getting back onto the river and shedding with Jackson Kayak.

PS: Later that night we all got sick from all the Clif Bars and Candy we ate.