Kelloggshow Takes on Columbus at US Freestyle Kayaking Nationals

Columbus, GA’s whitewater feature is one of my favorite features in the country. I was super excited to hear that they were gonna hold the US Freestyle Kayaking National Championships there! 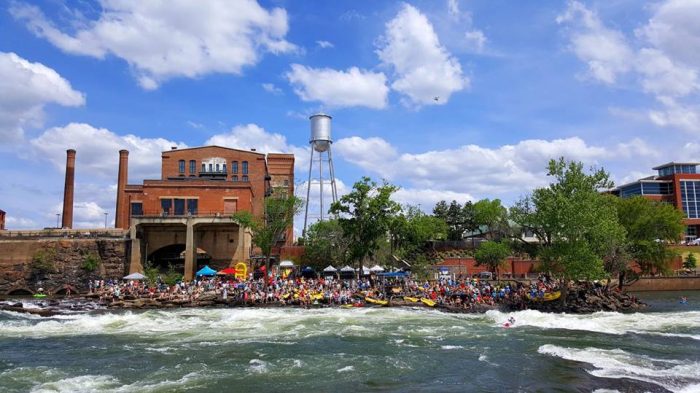 It had been 2 years since we’d been on the wave so we arrived in Columbus 2 weeks early to get some training in. The water was at a perfect level for the first few days, running 3 generators. Which makes Good Wave a really good wave, hence the name.

After the first week dark clouds swarmed us. Numerous tornado warnings were being sent all over media and there were three that actually touched down in Columbus. Throughout the day it rained nonstop and at night we got nonstop thunder and lightning.

It was a little scary being in the RV with nothing to really protect us. Just across the street half a roof was ripped off a building. So we figured we should take better shelter. Super thankful Outside World invited us in and let us spend the night during the craziest of the storms! 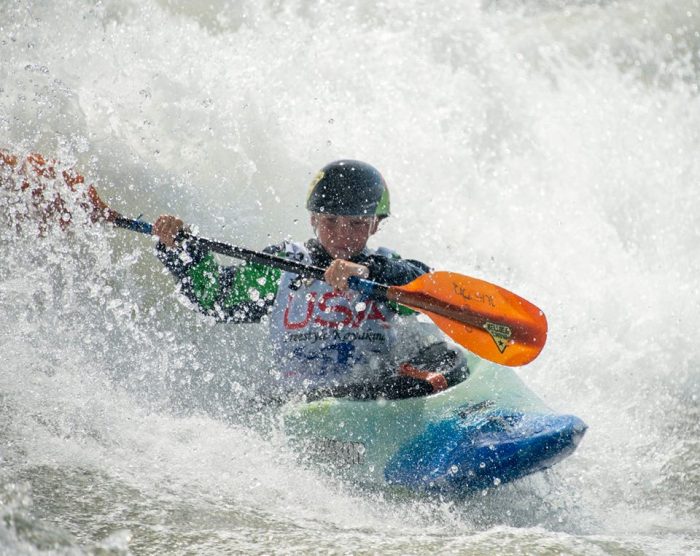 Because of all the rain the Chattahoochee hit flood stage. The water rose all the way up to the riverwalk. And the island was completely under, but this didn’t stop us from kayaking. As the water level was changing every day we found many new fun waves to surf

One of our favorites was on river left above where the old dam used to be. It was huge and no eddy access so we had to get out and climb over rocks to the eddy above, but it was well worth it!

When the level hit 30,000 CFS we decided to run Cutbait on river right. It was huge and terrifying just looking at it from the shore. I watched everyone go before me a couple times. My brother, Dally, the biggest daredevil, surfed both the massive waves! 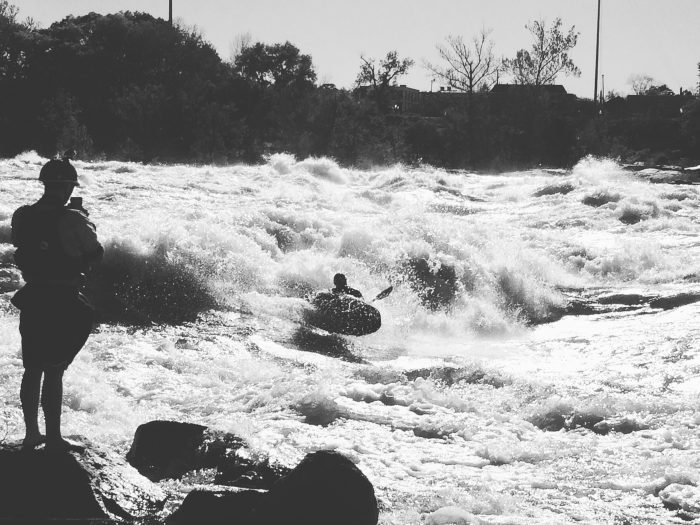 As I was getting ready in the eddy, local Columbus paddler, Bryan Bonner peeled out to run Cutbait. As I watched his line goosebumps covered my body. He got flipped around by the first big wave which set him up sideways right into the pit of the second. I couldn’t see him or his boat for a good 30 sec. My dad, a seasoned rescuer, quickly went after him to make sure he was okay.

Knowing Bryan had been body recirculated, I was still determined to run the rapid. I followed my friend and fellow JK paddler, Garrett Madlock down. I went too far right on the first wave so the curler caught me and pulled me back into the massive wave! I was thrown around left to right but quickly regained control and surfed my way out. I paddled hard through the second wave but still got caught. I surfed it for a short time until it flipped me out. You should have seen my face though! I was so relieved to make it down! 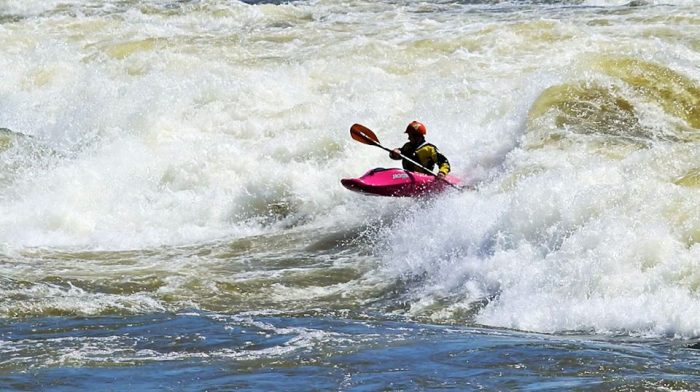 Once the water level had dropped another wave formed below Cutbait. It was one of the best, very bouncy and easy eddy access. I could have played on it forever!
My brother Kenny and our friend, Tom Dolle, also a JK paddler, took the Jackson Duo down cutbait, intentionally trying to get stuck. They had a totally epic surf that’s been circulating and going viral on social media. It was awesome.

As it came closer to Nationals the water level went back to normal and everyone started showing up. By Thursday night the little parking lot we were staying in was full of kayakers.

It was incredible to see the amount of kids competing. I remember when I was a cadet I had to compete against the boys. But there was a solid amount of girls and boys to make enough for each division. 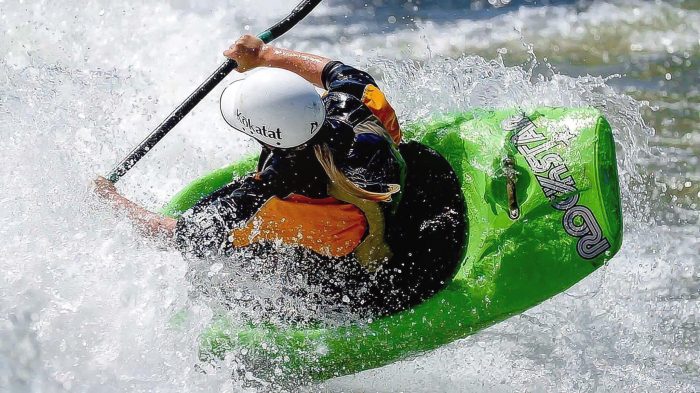 Friday afternoon during prelims the whole island was filled with prospectors and athletes. It was hard to find a seat! It was awesome to watch the competition and be back in the kayaking scene after a long winter of snowboarding.

I was stoked that my brothers all made it to finals! From Brody, in Pro-Men’s down to Rowdy in cadets! Maddy and I went straight to finals as there weren’t more than 5 competitors in our division . 7 of us in total competed and made it to top 5!

Saturday, finals day. Everyone was pumped and ready to go! The cadet girls was first to go, which included my little sister, Maddy! She had 3 amazing rides! Super happy to get her spins on a wave that is literally 20x bigger than she is! She got second place after Maddie Kimmel. Way to go to all the girls! 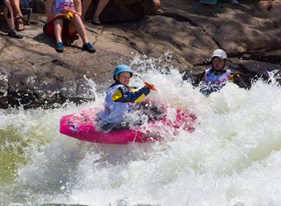 Rowdy and Cardy were neck and neck in their class. Both did so well! Rowdy’s biggest accomplishment was getting in the wave and surfing and having full control in his first real big competition! Cardy’s was scoring a few round houses! Rowdy was also the youngest competitor at Nationals! Cardy ended up beating his little brother and putting himself in 4th place, Rowdy in 5th out of 8 boys! I’m super proud of both of them!

In Junior Men’s, Kenny and Dally just came shy of making it on the podium. They both did amazing making it to top 5 out of 12 others.

I was a bit nervous when it came to my turn to compete against the Pro Women. This is my first year as a pro woman. Sad I’m not a Junior anymore, but looking forward to the rest of the year to come! I was stoked to hear the announcement that I placed second behind Adriene Levknecht! 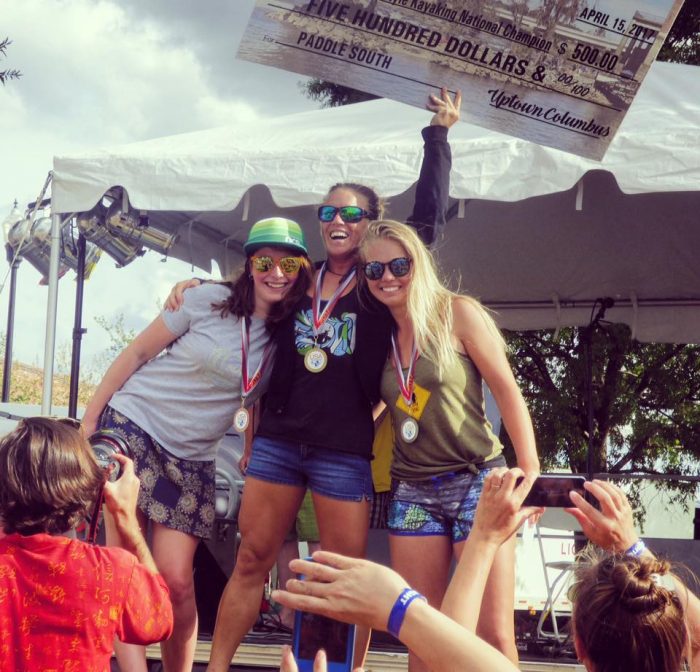 Brody also did amazing in Pro Men’s keeping himself in 2nd for most of the time until everyone’s last rides! Top 5 out of 14 Pro men!

It was an awesome time at Paddle South / US Nationals! Looking forward to a yearly event being held there! Big thanks to Uptown Columbus, Columbus Georgia Whitewater, and Outside World for everything, we had a blast!