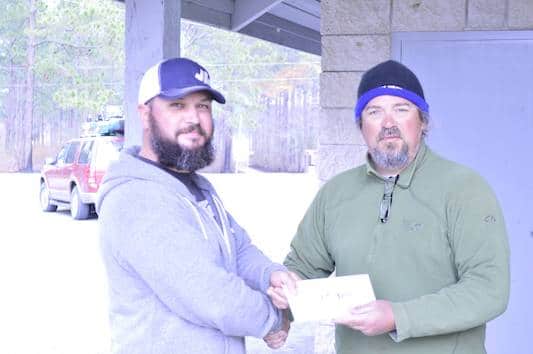 The second stop on the Peach State Kayak Anglers tour rolled into Paradise Public Fishing Area near Tifton, Georgia on February 4, 2017. Paradise PFA consists of 68 lakes / ponds totaling 525 acres. Anglers were able to launch on any body of water that was currently open. Additionally, anglers could choose to “pond hop” at any time during the event. With four ponds closed by the DNR for work, anglers had 64 lakes or ponds to choose from.

Since this was my first time fishing Paradise PFA, I headed down early Friday morning to do some pre-fishing. The weather in south Georgia in early February couldn’t have been more perfect. It was partly cloudy, the temperature was 71 degrees, and the wind was light. From my research, Horseshoe 5 looked like a good place to start, so that’s where I headed. I spent a couple hours there working points, off-shore structure, and some flats. I saw bass chasing threadfin on the flats but couldn’t manage a strike, so I packed up my Coosa HD and headed to my next stop.

Right up the road was Horseshoe 4, a similar-sized lake to Horseshoe 5, but it was much different. Horseshoe 4 had a good-sized area of lily pads across from the ramp and a small island off to the left. Since the surface temperature was 62 degrees, I headed to the pads first. With no luck there, I made my way over to the small island and fished around it as well as the channel between it and the bank. My luck there unfortunately was the same as Horseshoe 5, so with about 3 hours left of daylight, I packed up for one more pre-fishing pond hop.

After surveying several lakes, I put in for the final time pre-fishing on Lake Russell at the south end of the property. I fished my way around until I found a 150 yard stretch of bank that was lined with pockets of lily pads along it. I started working a jig-and-craw through the pads, bumping it along the stalks. I quickly tied into a nice 16.25” largemouth. At this point I had just started working the stretch of pads and had about 90 minutes left of daylight. Instead of continuing to fish the stretch, I made the choice to save this spot for the next day and I packed up my gear. This decision would be crucial to my tournament day finish. 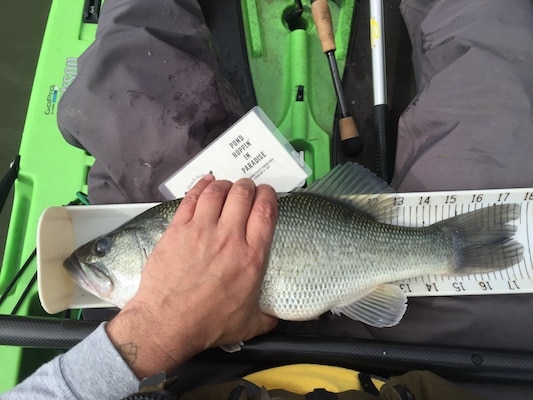 Saturday morning’s conditions couldn’t have been more different from Friday’s. We woke Saturday morning to a temperature of 40 degrees and winds from 15-20mph. With that wind, fishing a jig-n-craw, was going to be tough, so I called an audible on my strategy. I started my morning off on a very small pond called Noah’s Ark. Noah’s Ark was unlike any of the lakes I pre-fished. It was very small and choked with grass. I tied on a 1/2oz Strike King Red Eye Shad and burned it along the top of the grass. I quickly found fish, catching a small limit of five fish in 20 minutes. Then as fast as the bite turned on, it turned off, so I decided it was time to pond hop to try to cull some fish.

I headed back to Lake Russell where I had luck during pre-fishing. The wind was very strong at Russell and the lake was nearly white-capping. I decided to drive around and look at other options, but nothing jumped out at me. Back to Lake Russell I headed, to fight the wind. After launching I headed right to the stretch of lily pads and began working them with a jig-n-craw. After 15 minutes, I had my first bite – a chunky little fish that culled 4” for me. A little further down the bank, I managed to pull one more bite, I nice fat fish nearly 18” that culled another 6” on my stringer. I pounded the pads and fought the wind for a couple more hours but didn’t get another bite. I had a few hours left before measure-in, so I made one more hop, to a small pond I’d had my eye on – Horseshoe 2.

Unfortunately Horseshoe 2 didn’t produce for me and I headed to measure-in with a 73” stringer. Given the conditions faced, I felt pretty good about my day, but with 40 anglers spread out across the property, it was hard to know how other people fished. When the dust had settled and the fish were totaled, my 73” stringer was good enough to land me in Second Place for the day. I’m convinced that my decision to call it an early day on Friday instead of continuing to pre-fish that stretch of lily pads on Lake Russell helped put me in the money.