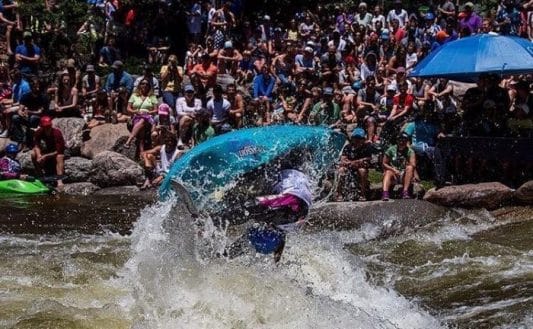 Over the summer, I went to five competitions, The Golden games, CKS PaddleFest, Lyons Outdoor games, The GoPro games and I ended the season with FibArk. 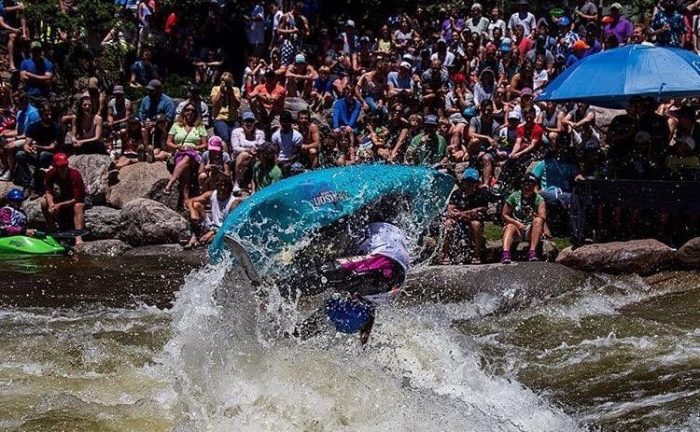 The first competition I went to this year was the Golden games. There I had a chance to really get back in my boat after the seemingly endless winter, thank goodness for ski season! The hole was tough, I outgrew my boat over the winter months, and my lack of practice put me in 3rd out of 4 cadet competitors. It was a good competition to get back into the swing of the season and I definitely enjoined seeing some great people that I had not seen in awhile, and I even made some new friends! 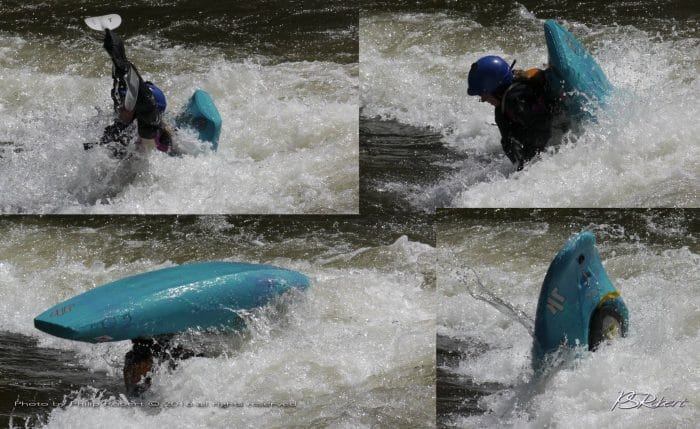 I decided that I was going to do better in Buena Vista than I did in Golden. So all week between the two weekends I got back in my boat to get back in my grove. Sure enough, I did get back in my grove and I made do with my current boat size. My mom and I got there mid day Thursday to set up camp. I brought my new found skill, my unicycle as my choice of transportation for this trip. As soon as camp was all set and ready, I geared up and headed to the river to get a feel for the competition hole. I got down there and there were probably 15 people in the water that had the same idea. I managed to squeeze myself into the mix to get a few rides in. After my first ride I knew I had found my new favorite feature. I think the feature liked me too because I ended up getting my Space Godzillas on both sides which I went to score in the competition the next morning! It also helped that I got to demo one of the new Jackson Kayak XS Rockstars, so finally I was in a boat that I floated in! In the morning I competed against some awesome competitors. My good friend Abby Holcomb and I were neck and neck the whole competition but I pulled ahead during my last ride finishing with a newly learned Space Godzilla. The competition finished with the Jackson Kayak team girls sweeping the podium with Maddy taking 3rd, Abby taking 2nd and myself taking 1st with my new personal high score of 295 points! Then the rest of the weekend I spent hanging out with friends, enjoying the water and trying new things like running my first class 5 rapid called Pine Creek. 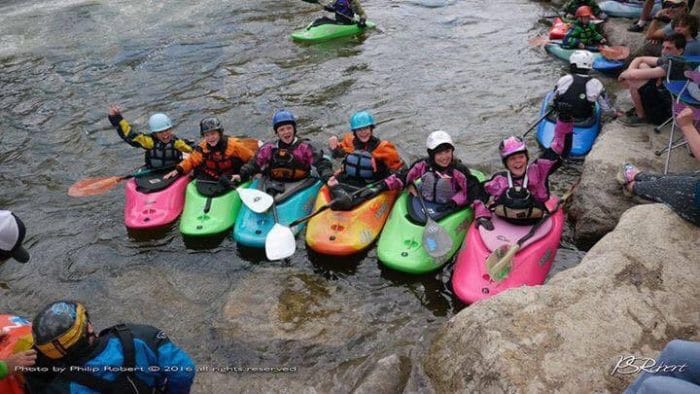 After Paddle Fest I came back to my home town for the annual Lyons Outdoor Games. There I took second place in the cadet division with a score of 200 points. The rest of the the day I timed other competitions and cheered them on! I got in the hole a few more times. This hole has been a bit tricky since the floods in Lyons 3 years ago. Luckily some people decided to dam it up with some rocks to reconfigure it a bit in order to make it deep enough to plug. Then competitors really started to get in their grove! I also met some great new people there like Clare O’hara, who started to give me some great tips. I love how helpful and friendly the kayak community is, it’s so unique to experience a competitive environment where competitors really look out for eachother. 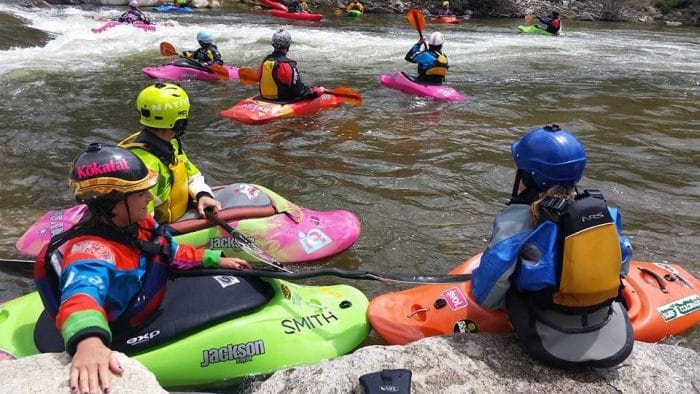 Next stop was the GoPro games. This event was not like any competition I have ever been to before! I have never had so many eyes on me at once. There were so many people and so many dogs! I am a total dog lover, so this was a great time for me! On top of that, I did great in my competition, it was probably the best that I performed all year. I placed 5th out of 13 competitors in prelims and finished in 8th in semi-finals. I was not upset about not making it to finals because I really did not think I would make it as far as I did considering there was no cadet or junior division! So I competed against some amazing female boaters of all ages and skill levels. The hole was awesome but the eddies were hard to catch after getting flushed. When I wasn’t in the water I was running around with my friend Abby Holcombe looking at all the tents. There were so many things happening around us like GoPro giveaways, slackline competitions and even dogs competing in agility competitions. There was so much excitement and life in the Vail Village that there would be no way to even see it all in one weekend. It was an awesome weekend full of fun and adventure! 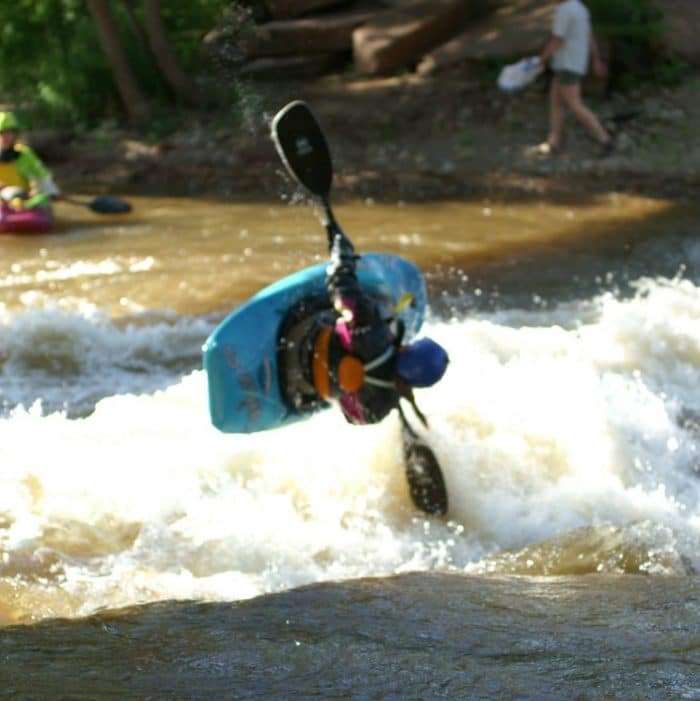 After going to the GoPro games in Vail one weekend and then going to Fibark in Salida the next I kind of went into culture shock. Fibark and the GoPro games were both so fun in very different ways. Vail was very busy and Salida seemed more focused on river sports. With that said Fibark gave me a chance to work on some wave tricks which I had never tried before. Clare O’hara really helped me with learning some of these new tricks. I learned a lot about boat control and I got a really good start to my blunt and my air screw. I camped while I was up there which is always a blast. The competition format was pretty crazy but it was different from what I am used to, which made it more fun. It was called a Jam Session format which is where everyone in the division competes at the same time, so for a set amount of time the competitors just rotate in and out of the feature. I had never heard of this before so I enjoyed mixing it up. I finished in first place yet I did not reach my personal goal. I would much rather reach my personal goals than place because to me, it is not your place on the podium that determines your skills, it is the improvement that you make and the determination that you keep that really matters! 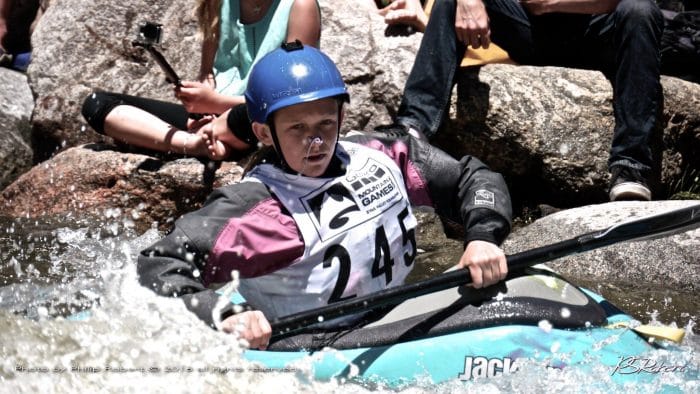 Overall I had an awesome 2016 competitive season and I am really looking forward to competing in 2017 and smashing my new goals!