Chasing bass in the Ocala National Forest with Jim Ware 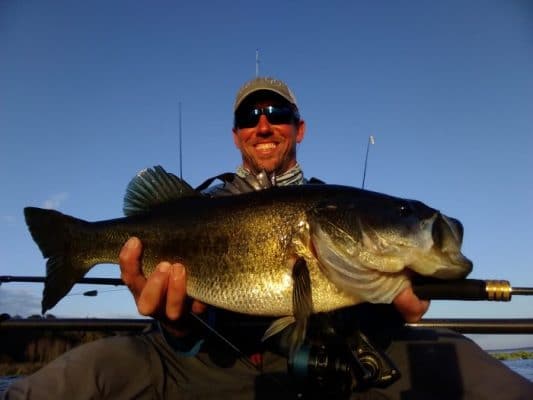 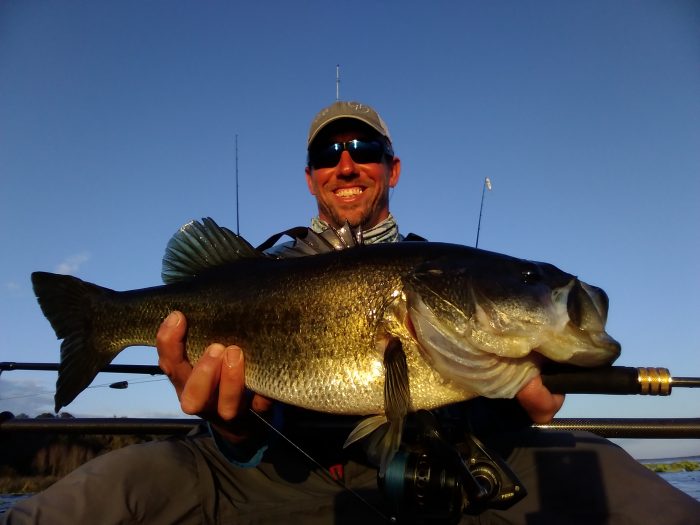 My family has had a hunting cabin located in the Ocala National Forest since I was a kid. We mostly use it as a hunting base camp during deer,rabbit and turkey season and as a kid we occasionally chased bass while we were on vacations there. As my interest in bass fishing has been growing this last year, I’ve been wanting to get sometime to emerse myself in bass’n out there. 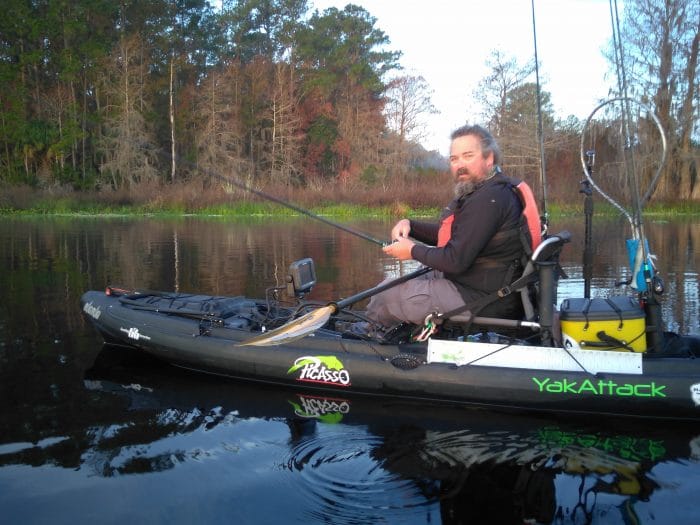 When fellow Jackson Kayak teammate Jim Ware contacted me and ask me if I’d be interested in meeting up and camping for a day or two, while he was on week quest to target Florida’s stand of Black bass. I was super stoked not to be booked and have a comfortable bed and hot shower at the Cabin to offer Jim while he was in Florida. The stage was set for multiple days of fishing from dawn till dusk in some of the most beautiful areas Florida has to offer, with a new friend. 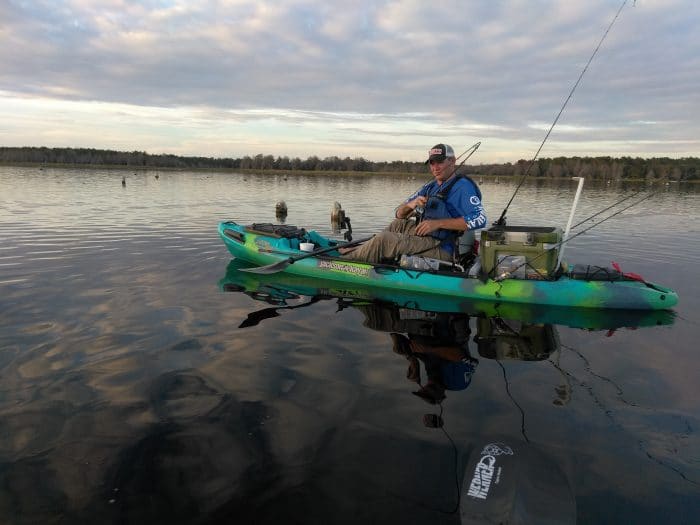 Like most excursions this one started of slow. We started our first day out on a body of water that I had some luck fishing about six years before. The morning was a perfect January morning, with the temps in the low seventies and foggy. We were joined by a good friend of mine, Ben Guise, to start the chase for a forest lunker. I was using my Kraken13 for this trip, it’s my all around favorite kayak, even though it is not really equipped with some of the bells and whistles that the CoosaHd has for bass’n. Ben was on the CoosaHd and Jim loves his black on black BigRig. We lost a few good ones and caught some dinks but by lunch time we knew it was time to move. Our second location, located in the Rodman Reservoir, a world famous bass fishery, had us hopeful. Again we lost some good ones, with Ben losing a monster to a log but had nothing on the decks but dinks. 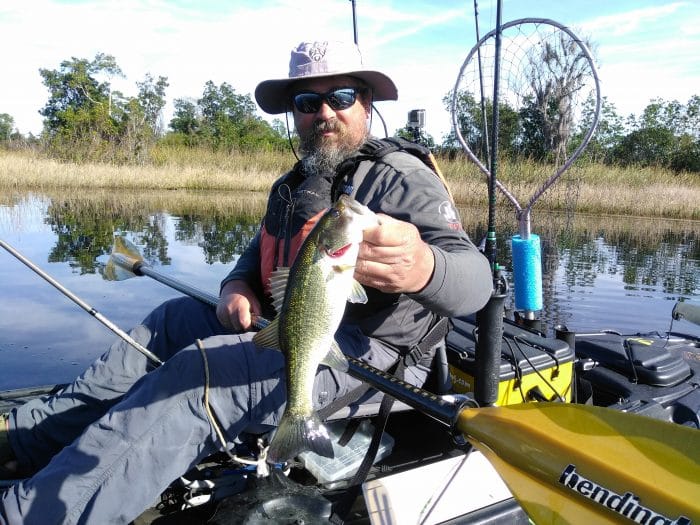 On the second day Jim and I decided to head to Wildcat lake a 250 acre lake that doesn’t allow harvest for black bass. With depths up to 22ft, we new we were in the land of giants. I’m sure we were right but the only giant we landed was a trophy class blue gill that slammed my slash bait. 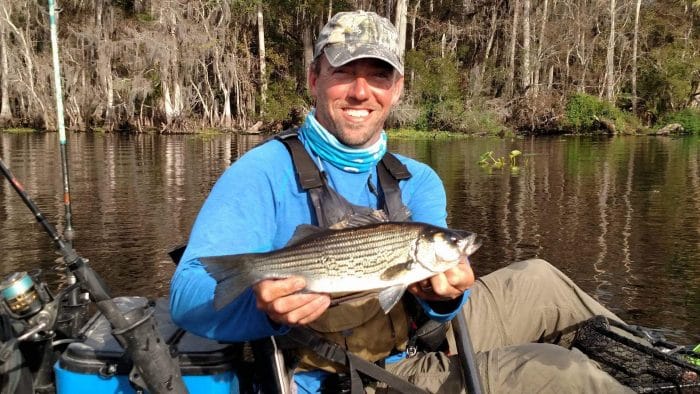 Midday we decided to move again to a area off the St.Johns River around Astor,Florida. This was probably our best bite for bass. The only issue was the size. It seemed that one pound was our limit on bass. I was stoked to mark a species off the list, with my first sunshine bass. 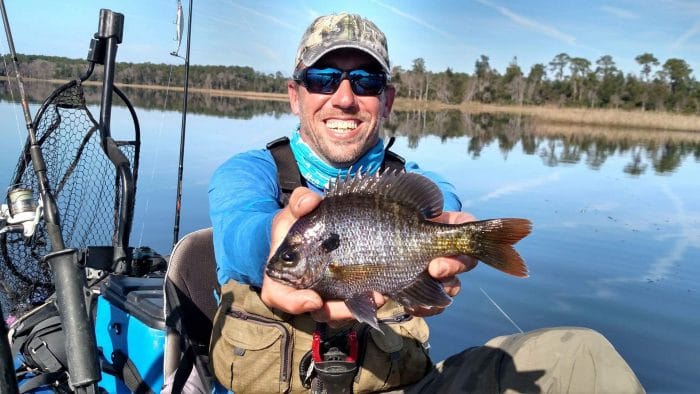 With one day left, it was time to back track to an area we had fished in Rodman Reservoir, where we felt it was our best chance for a lunker. I even stopped by the local bait and tackle shop,Advantage Sports in Salt Springs, and grabbed two dozen wild shinners. Yep it was time to pull out all the stops. It didn’t take long for me to land a good bass around the three pound mark, but after that it was misses and a assortment of other species quickly drained the shinner supply. 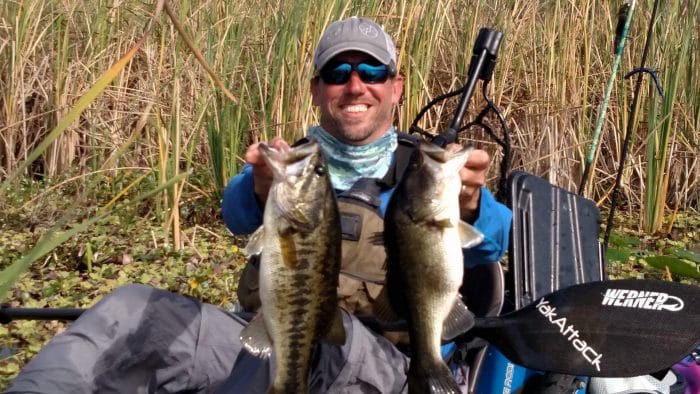 It was midday on the final day and we still didn’t have a bass over five pounds. Crunch time! A bass boat fisherman, John Qeu Thomas, had passed us a few times throughout the day and was always extremely courteous, slowing down, or going around the areas we were fishing. He stopped to ask how we were doing and showed us some bass to get us pumped up for our afternoon.We caught one bass at eight and half pounds the other ten and a half. True pigs!!
Jim and I had some new techniques and a new look on the day. We slowed way down and started the grind out our last evening , to make it happen. 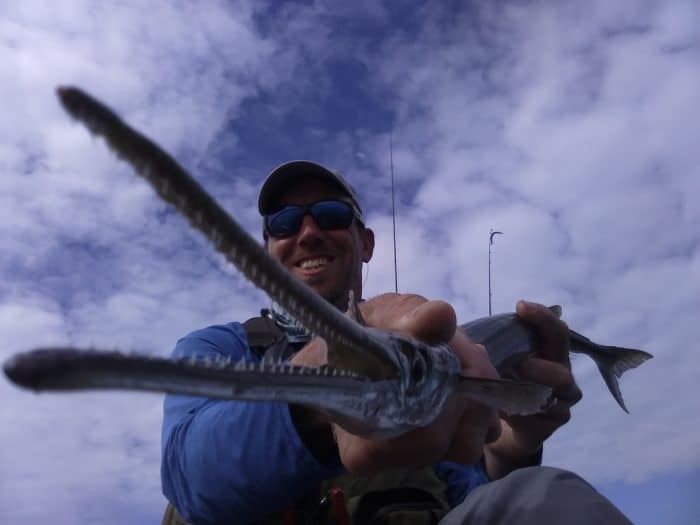 First cast after rerigging, I stuck a nice three pounder, so now the confidence was up. We headed over to an area that we had confidence in and started to work the area meticulously. It wasn’t long after that until I was able to stick a few nice ones. One weighing in around three pounds 14 ounces and the other at 3 pounds. After a few quick pictures, Jim and I had started to work some different areas and we’re getting further apart. I had seen an area that had some shallow water with plenty of bass beds, so I went over to see if there was any hanging out there. It was at that point that it happened. No not the lunker that we have been looking for and with a slight misjudgment of balance and I was overboard! I spend a lot of time standing in my kayak and it’s been a long time since I had made this mistake. 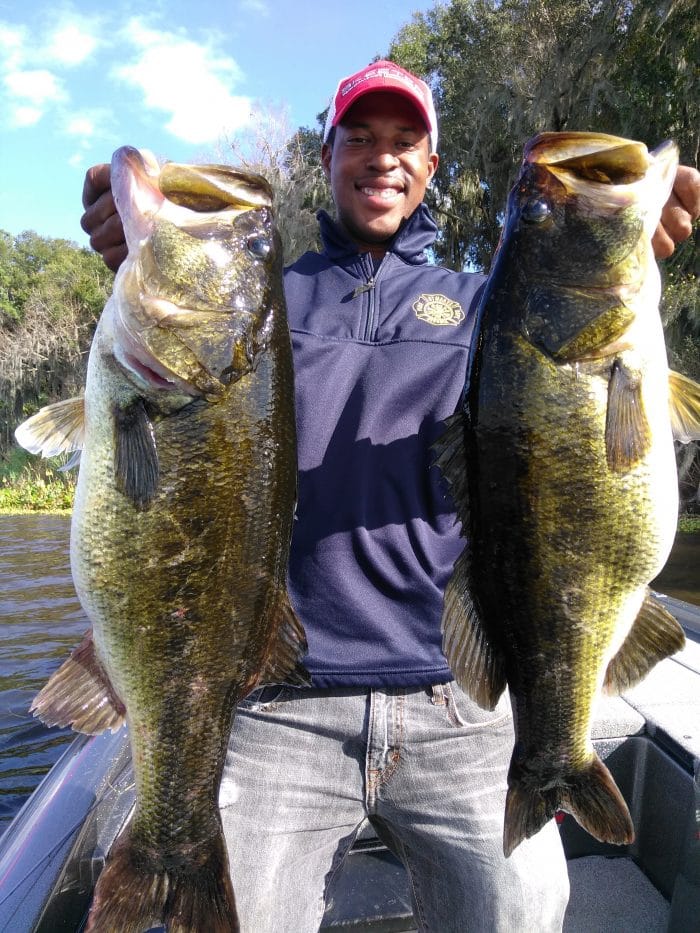 Fortunately it wasn’t over top of the oysters, like I usually am. I was in about four foot of crystal clear water, on a 80-degree January day. After being refreshed with a quick dip and getting back in my kayak, I headed back out to an area that was a little further away from Jim. On my way out I trolled a paddle tail behind me, getting a large hit but not able to keep the hook into him. I lost him on his third jump, it was a solid fish and I was disappointed. I stopped there and started to make some casts,when I felt a strong thump. When I set the hook, I knew it was a solid fish as it came to the top and shook its head. It was at this point the beast made a large jump and then a hard run, followed by a few more jumps. I was as nervous as if I had a hundred pound tarpon on. I did not want to lose this fish! Fortunately for me, I was able to keep the hook in the fish and get him aboard. The nice twenty-four and a half inch largemouth bass was my PB off of a yak! Jim had a digital scale with him, but was too far away for me to risk the the life of the bass, for a weight measurement. Between the lenght and looking at the pictures,we estimated the weight around seven to eight pounds.
I meet up at dark with Jim , near a stump we had taken some pictures near earlier in the day. We noticed a high pitched humming coming from the hollow tree. It was home to what looked to be over a thousand bats ,once they started to come out at twilight. That’s the kind of thing that reminds me why I love being outdoors so much. The canvas of nature is always changing. 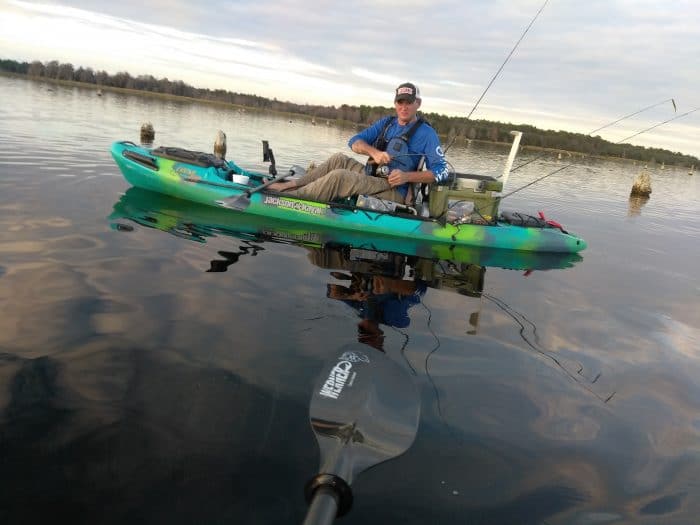 I hope this article inspires you to get with new friends and old and plan an exscursion where you’re out of your comfort zone. Maybe go for a species that you do not normally try for, don’t be disappointed if it doesn’t work out , because the journey is the best part. Catching the lunker is only the icing on the cake. 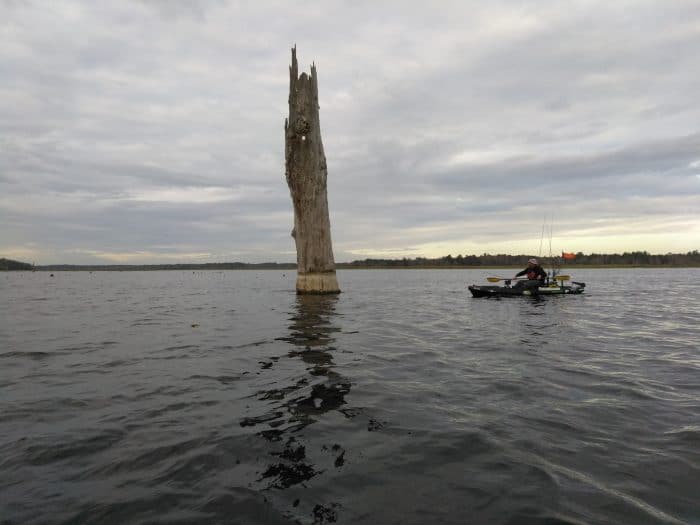