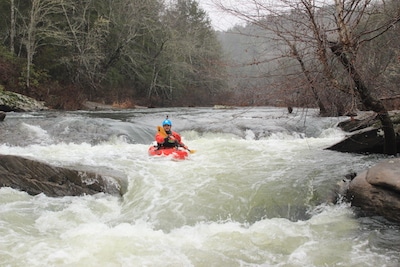 There are a lot of reviews on Jackson Kayak’s boats from a lot of very experienced people, and they’re extremely helpful, but as a brand new paddler I thought it would be useful to offer an different perspective on the Karma Traverse. For some background about me: I have been on whitewater exactly once in my life when I went rafting down a river around Cody, Wyoming when I was 8, and by “rafting” I mean I was hanging on for dear life. 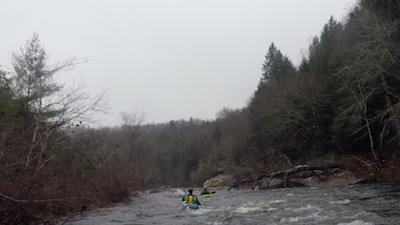 The Initial Impression: This is a cool boat. Yes, when I first paddled it I went round and round in circles until I learned how to properly paddle. The seat is comfortable and being 6’1″ and 200 lbs. I love being able to adjust the legroom. I wear a size 13 shoe and when I’m barefoot I have plenty of room; when I wear shoes they are just barely touching the top and bottom of the boat, but I’m going to cut the foam at an angle to get some more room. The skeg flat works and is quite possibly the greatest thing about the boat, and there is a ton of room under the hatch. I hammock camp and could easily put enough gear for 3-4 days in the rear of the kayak alone. 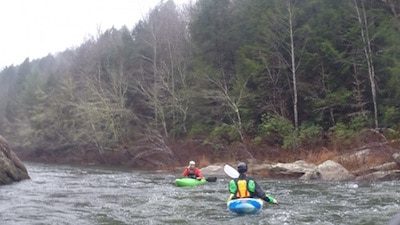 The Roll: I learned how to roll in about 10 minutes so if I can do it, anyone can do it. It feels super responsive to every hip movement which really helps. 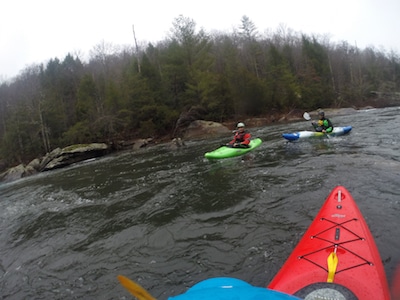 The First Rapid: So I was pretty nervous when I was at the put-in. I could roll and roll and roll on flat water but I was worried I wouldn’t be able to on the river and I would be swimming more than kayaking. I shouldn’t have worried as the Traverse moves extremely well over the water. The biggest problem I faced was making sure I kept the bottom of the Traverse pointed upriver if I ever went sideways, and after entering and exiting an eddy a handful of times it was more natural. 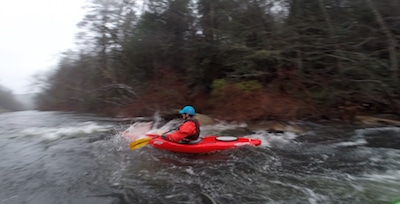 I took my first trip down Clear Creek in Tennessee and it was flowing on the low end of runnable, but I went through Class I-III rapids and never really had to worry about the rapids, I was more worried about the rocks that I couldn’t see! If the water was about 3″ higher I wouldn’t have had an issue at all. The Traverse is extremely capable as long as it’s pointed somewhat down river and you can definitely tell that it has pure white water in it’s genetics.

Final Impression: The Karma Traverse is a fantastic kayak. It does flat water extremely well for a flat bottomed kayak, the skeg is like hitting the “Easy” button, it’s easy to roll, and it’s so easy to take in whitewater it’s almost like cheating. I’m so confident in it’s abilities that I’m going to teach my wife how to run white water in it. She’s already paddled on the lake with it and had the paddle movement down in about 15 feet. That spinning in circles thing that happened to me? Yeah, not so much for her…

The great thing about the Traverse is it paddles so easily you can enjoy the trip. We started in cloudy weather and watched as the fog rolled in and shrouded the tops of the trees.