The most unique Coosa!

I got an email from on of our fine dealers that is helping coordinate an event that will support the Wounded Warrior organization. Not only are they doing good for their community but they have build the most unique Coosa ever. From what I understand this Coosa is roughly worth $5,000. More photos to follow. 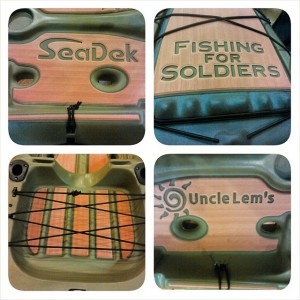 This is John from Uncle Lem’s Mountain Outfitters in Knoxville, TN. Attached are the first two photos of the custom Coosa that we are giving to the Wounded Warrior Project benefit tournament, Fishing for Soldiers. Originally the tournament was only for bass boats and I told him that we could create a kayak division and get an estimated 75-100 kayak anglers in the event. We have had some great response from the kayak community about the tournament. The local kayak fishing club that I am a part of consist of about more than half active duty military members or veterans, so once they hear about the tournament they were all about it. This will be more than just a fishing tournament. There is going to be food, venders, music, demonstrations, and much more so it will give the families and friends something to do while everyone is fishing.

The tournament will take place on October 18th in Knoxville, TN on Ft. Loudoun Lake. There will be a captains meeting at Uncle Lem’s the night before at 7pm. At the meeting we will have food and we will go over the rules and regulations. Anglers will be allowed to launch from any legal boat ramp on Ft. Loudoun Lake at safelight on Saturday and must return to the canal boat ramp in Lenior City by 3pm for weigh-in. This event will be a CPR style tournament; catch, picture, release.

This Coosa will go to the top kayak angler of the day and will have a custom SeaDek kit, Yakattack BlackPak and other accessories, Raymarine Dragonfly 5.7, a marine leather seat, and some other really cool features. The concept for the Coosa was to look like an old Army Jeep, and I think we were pretty successful so far. The leather seat should really help bring the whole concept together. I will send pictures to you as the different parts are finished. We will have professional pictures taken once the whole kayak is complete. I will be in touch as we get closer to the event.