There’s Something About the Smell of Plastic in the Morning

The minute I got out of my car I felt something special. Like the smell of the hot pits before the flag falls: beyond words, just the silence of smell. Strangely, it felt like the adrenaline of VP Blue 98 screaming out the loud end at 10,000+, like the perfume of hot rubber ready to squeal, for I was at the start, this was where my Karma and Rogue crossed the line on their way to me.

I felt like I did when I first met Roger Penske and Lee Iaccoca years ago. Only this time I was meeting a kingpin of kayaking, not cars, the man who headed the team that made my Karma and Rogue. They were special boats and I’ve written why before. Not only were they built really well, they were special because of how well they take care of me, a geezer doing 50 in a 77 zone, and headed to 100. I knew I could make it because I could trust my boats weren’t going to let me down. They were going to make me safely healthier every time. Now I was entering the factory to see just how and why my Jacksons made me feel that way.

I’ve been in a lot of factories, small, medium, and mammoth. I’ve helped develop flow and systems and procedures in many ways. I was experienced in what makes a good manufacturer. I was also intimately familiar with shipyards and ship builders, (large and small), I had worked side by side with men and women born of generations of pride in crafting a vessel that’d take care of her crew and stand the test of time, even if it was made from one log.

As EJ guided the bunch around me from the office area into the manufacturing plant, it felt like entering a museum, a museum of color, shape, and sound. A museum of craft, of skill, of care and pride. Sure, there was a bit of the awe in me, not unlike when I saw the first Mustang prototype and shook Lee’s hand. Even though I had been a novice kayaker only for a couple of years, I‘d been around champions all my life and had a some medals of my own. I could smell champion all the way from the podium to the production line. There’s something about them, no matter what they do or have done. You just know. And I could feel that in that plant.

I’ve got to state that this is not a stupid bit of flack, written under the influence of the sweet smell of plastic (or something else), or written and paid for by a mogul, a Wall Street greedhead, pol, or a flake. I mean what I say and I’m not paid to say it…period. Wish I was, but the fact is I entered the Jackson plant and certain clues stood right out.

First, it was the impressive statues of kayaks, at attention, neatly stacked on their ends awaiting the big-rigs that’d start them on the way to their owners. Talk about candy stores! As far as I could see was everything from A to Z in a riot of color. Kayaks don’t stand easily on their pointy little ends, yet I’ve seen parade-ground platoons sloppier than those rows were.

All around was the thrum of purpose. The determined hum of men, women, tools and machines at work. But more than that was a pulse, a susurrus of craftsmanship. Of the spark that glows within every craftsperson that truly cares, no matter their task. Who overcomes the flu or bellyache because their hands are their life and soul, not just that if they stay home they lose some pay or cred. They work because of the pride that’s in their blood. Some are Tennessee proud, Some from somewhere else. but no matter where, this is what built this country, plain and simple. and it builds great kayaks.

There were the molders, carefully balancing the temperature, and time of the hot plastic inside huge, boxlike structures, in which the plastic was baking and shaping what would become a Kilroy, a Zen, or Karma, not just a kayak. There were the people who controlled this hot, beast of a machine inside which was gestating a Jackson Kayak. Inside was not something that’d end up in a box store on the top of an aisle full of bicycles and tents, plastic goggles and loose-threaded duffels. Inside was, a Jackson Kayak. 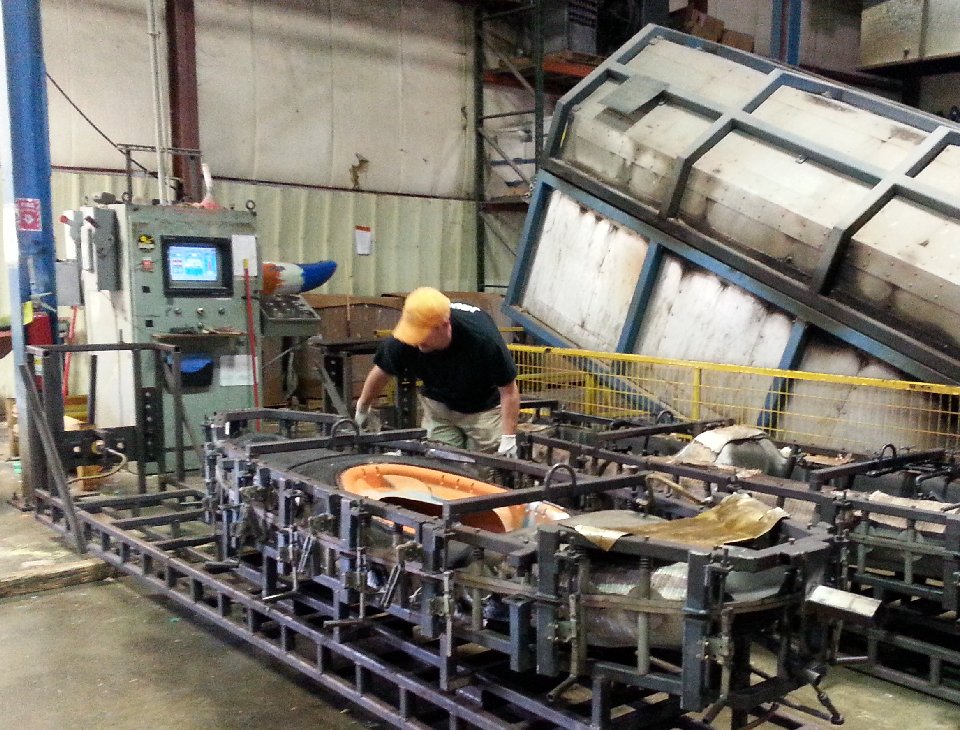 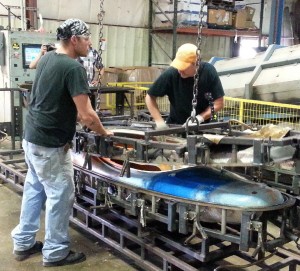 Removing it from the oven. 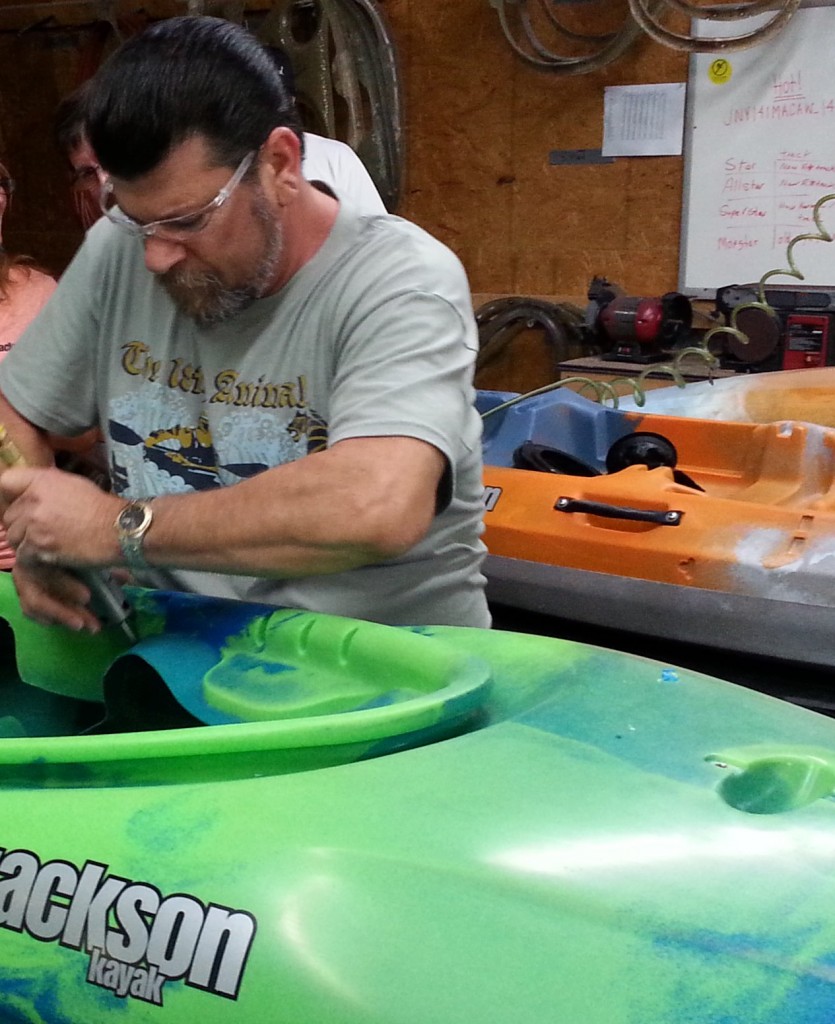 There were the trimmers, who unerringly shaved Karma to their final cockpit shape. There was a lady who put the logos on new boats and each time she did there seemed to be a flash, a flash of pride in her and another flash in the boat as if it sensed it was now really alive and just waiting for the rest of its parts before heading out the door. Here were the people who painstakingly put cushions to seats. Now one might think that if ever there was a job at the bottom of the food chain, this would be it. But they knew how important a comfortable bottom is, so they worked as if it was their own cushion.

Everywhere I went in this factory was the sense of passion and pride. And it shows, not just in the boats I owned, but in how the machines were tended and cared for, the floor was clean, the precision each craftsperson shaped, cooled, trimmed, polished, connected, aligned, mounted, stamped and wrapped. And I don’t think it was just because they wanted to show off to some outsiders.

These men and women are shipbuilders, part of one of the most skilled crafts in the world. Makes no difference how big, if it’s got a point and lives on water it’s built by a shipbuilder. Maybe some boatyard employees call themselves boat builders, but they’re the ones who just work for a paycheck, for the most part. Real craftsmen build ships, even if it’s only for one person. Don’t know how much EJ pays his employees but he does something right because these people had the kind of class that only comes from the pride of being a good at a craft, no matter what.

Made me feel pretty good when I saw what went into building my Karma and my Rogue. And it was the same in the office. Maybe those folks didn’t have their hands on a hull, shaping, smoothing,mounting, but they had their hands on something, requiring just as much craft: Keeping it all together. They have the unenviable task of being Rudyard Kiplings 24/7.

All through the building was this noticeable attention to detail. So much so, that it reminded me of a story someone told me about my own Rogue. That Rogue was not built any different than other Rogues The employees didn’t know me from Adam, but I’d asked for it to be signed by anyone who had a part in bringing it alive, because as the founder of GrayBlades where we show people 55 how to go 100, I wanted people to see that one way to be healthier and have a lot more fun out of life is to be invested in not just the quality of yourself, but also that quality is super critical in the tools and toys that can help you overcome. So I wanted a connection to the builders, a connection to the quality that’s beyond comfort, stability, safety, and fun.

According to the story, just as my boat was about to be wrapped for shipping, and the big rigs were impatiently waiting on the dock, someone whistled loudly, everything stopped, and the Sharpies flew as each team member signed their name.All those signatures were bold, and strong, but one really stood out. Bigger, bolder, definitely not bashful: “Two-Ton”. I never met Two-Ton, but someday I will because I know this guy. He knows he’s good. He knows he’s a team guy. He’s a builder. He’s a maker. He’s telling me, “Look hoss, I don’t give a rat’s ___who you are, just take damn good care of my boat.” And I have and it has. Because it’s a Jackson and Two-Ton is a Jackson Man.