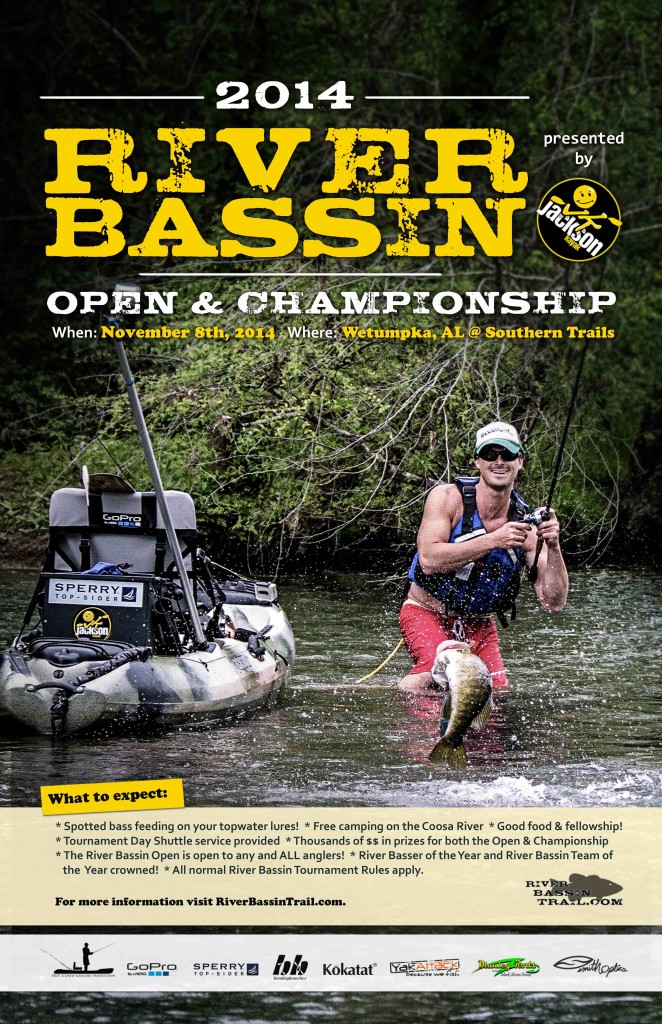 Ok, before I begin I have to take a deep breathe because there is a lot of exciting stuff to talk about concerning the trail this year and how it is panning out. The River Basser of the Year (RBOY) and River Bassin Team of the Year (RBTOY) races are very close and so many individuals and teams still have a shot at taking the title in Wetumpka, AL, on November 8th. In fact, there are still plenty of stops left on the trail (12) for someone who hasn’t even fished one yet to come out of nowhere and end up being our champion, especially with so many midwest and northern events yet to come.

Before I get into some of the cool story lines regarding the RBOY and RBTOY I wanted to share a couple highlights that we’re proud of so far. We’re just past halfway and we have had 788 registrations at events (many people fish multiple events) and have “scored” over 7,750 inches of bass! Kudos to River Bassin nation out there for showing up strong and to all the Jackson Kayak dealers for promoting the tour and opening their doors to us. When the sport thrives, these independently owned family businesses thrive and the entire industry grows together in the positive direction that we hope it will continue to grow – most notably the promotion of catch, photo, release (CPR) and proper river stewardship to ensure that we have great trophy fisheries and beautiful rivers for years to come.

Now, onto the drama that is unfolding towards the River Bassin’ Open & Championship event in Wetumpka, AL, on Nov 8th. Currently, on the team side, we have the RiverChamps (former RBOY Lance Coley and Tim Perkins) in the lead with 295 points with their top 3 finishes being a 105, 95 and 95. However, there are 6 teams within 100 points of the top duo, including several teams that have only fished in 2 events! Remember, your top 3 finishes (out of however many you want to fish) count towards the series points and you get 100 points for a 1st place finish, 95 for 2nd, 90 for 3rd etc. However, you can get 5 bonus points if you fished a regional event AND happen to beat my partner and I’s score (or Brooks Beatty and Jameson Redding if I was unable to attend). Many top teams who have only fished in 2 events are registered for future tournaments so this is all about to get real real close! 2nd place is Team YakDips, Stewart Venable and Chris Gravely with 100, 90, 100 = 290. 3rd place, Bro’s with Poles, Bryce Bradley and Troy Bradley (100, 95, 90 = 285), 4th place are the Hobie Honeys, Robert Sowder and Jo Nelson (95, 80, 65 = 240). Now, 5th place through a tie for 8th place is where it gets real interesting if you look deeper into their scores. In 5th place, team YakMaster of T.j. Strong and Matthew Schaefer, (100, 105, –,  = 205) are currently boasting the highest average per event (102.5). The second highest goes not to the RiverChamps in the lead, but rather the 6th place Don’t Choke team of Calloway Rabb and Craig Dye (100, 100, –,  = 200). Now, even looking all the way down at what is “technically” the 7th place team, Heavy Weights, comprised of David Smith and Sam Bailey (100, 95, –, = 195), we see an astounding average of 97.5 points per event. Just to compare, our leading team is averaging 98.3 points per event so this really is going to be a close finish if any of these teams place in the top 5 in any of the remaining tournaments. Looking next at the two teams tied for 8th place at 170, GetTheNet and Young Harris College, we see that they too have only fished in 2 events and are still in the the hunt.  The point is that if there were Vegas odds for River Bassin’ one would have to think that there are about 8 or 9 teams that would basically be a coin flip to come out on top given how close they all really are. 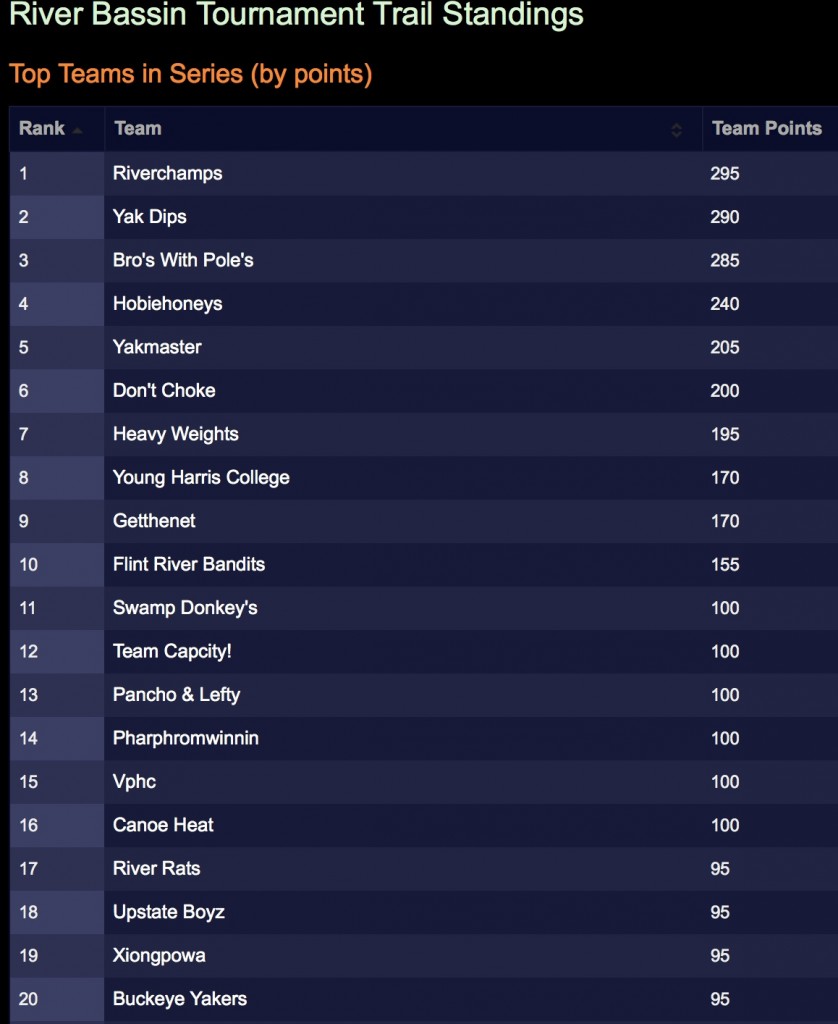 So, by now you’re probably wondering how this whole thing will play out at the championship on Nov 8th, right? Well, the moment you’ve been waiting for has arrived. The RBTOY will be determined by whichever team has the top 3 regular season finishes PLUS their total from the championship BUT the championship is worth double the points (200). Reasonably big moves are still possible although a move from outside of, say 20 points behind, is unlikely because the increments decrease only by 3 points per place at the championship – 1st place = 200, 2nd = 197, 3rd = 194, 4th = 191 etc. This will help break up some of those ties and quite frankly shows a little respect to the teams who have worked so hard to get to the top during the season. For example, if your team is within 20 points of the lead team and you finished 1st at the championship then the leading team (and any other teams with a similar score) would have to finish in 8th (179 points) or worse to make up that 20 point differential. It is a tall task for sure given how many top teams there are, but it could happen. With this many teams close together, the odds are that one of our current top 9 teams will be our 2015 champion, but that sure is a lot more exciting than just a one or two horse race! There will be a 5-point “Beat Team Drew” bonus at the championship so getting above that threshold, and hoping teams above you do not, will be key for any team trying to make that comeback. We’re planning on posting that score by Thursday before the event so that teams know what the number is well in advance and can shoot for it on Saturday. 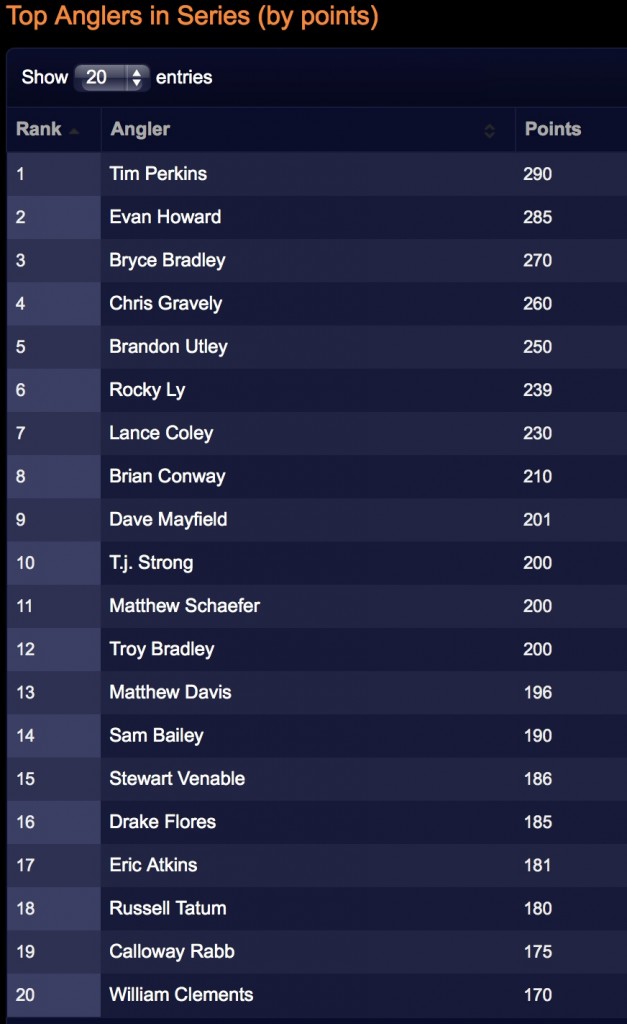 The RBOY race will wrap up with the same scoring at the championship as the team race – 200 points to the winner and then dropping down in 3-point increments. There will also be a “Beat Drew bonus” of 5 points for whoever beats my score from earlier that week. So far only four anglers have beat my score at regional events and I plan on continuing to make it as tough a challenge as I can! After all, it is the only way I get to sort of compete in these events myself!

In summary, I’ll give more of an analysis as opposed to just reading off facts that the standings show us. I predict there are a few HUGE regular season tournaments yet to come that will play a massive part in determining the champion. First off, the standings are pretty evenly spread out with anglers from all across the southeast and even Texas. However, lots of events in the north and midwest are still to come and I believe a person who has yet to even fish one or two events (maybe from further north) will be in the top 10 and fighting for the RBOY title come championship weekend. Someone reading this right now, that maybe hasn’t even heard of the River Bassin Trail, could still be our champ.

I predict the last regional event on August 2nd at the Outside World in Columbus, GA, will probably feel more like a championship event given how it is fairly close in proximity to the current top 10 vying for the RBOY and RBTOY titles. It is also the last chance for someone to get a 5 point bonus by beating my score, and in complete honesty I struggle to find bigger fish in the summer so I bet I will have a beatable score in Columbus.

Seeing as how most of the anglers currently in the top 10 are within a 3 – 4 hour drive, or less, of Chattanooga, TN, I predict that that “local stop” at Rock Creek Outfitters on September 6th will feel more like a “regional” in terms of who is there. If you aren’t there and you’re in the top 10 then you know you’re just giving someone else an easier time to place atop the leaderboard. Even in an almost defensive strategy it is a good choice to make that event to protect your standing.

Even though more top anglers are currently from GA, TN and AL, if you look at the schedule you’ll see there are still two local events in the Carolinas, one at Great Outdoor Provision in Winston Salem on Sept 13th and one at Adventure Carolina in Cayce, SC on October 25th, which also happens to be the last tournament stop before the national championship! I bet Cayce has a big showing and that someone from the Carolinas will move up the leaderboard with those two stops being sort of their “home turf” advantage.

The last tournament of note that will play a big part in this outcome is newly added Huntsville, AL, on September 27th. Leaf in Creek Outfitters called and really pleaded to be added to the schedule this year so we decided to make let them in as one of the last events. This will end up being a big event because it is the second to last one before the championship and, again, so many people in the top 10 are within a few hours drive of Huntsville, AL.

How will this all play out at the River Bassin Open & Championship in Wetumpka, AL on Nov 8th? Who knows, but I know that we’ve had a blast watching it go down LIVE with the new live scoring system on the River Bassin Trail this year. I can’t wait to see everyone in Wetumpka, where we’ll have free an amazing time of fellowship, free camping, some free food (included in entry), free shuttle services on the Coosa River available through Southern Trails, and what is normally perfect camping and fishing weather that time of year. We also have a few thousand more dollars of prizes that we’ll be giving away at this event that, again, is an Open Championship so you do not want to miss out on a deep deep payout tournament where everyone ends up walking away with some cool stuff provided by the many trail sponsors. So, even if you haven’t fished one event all year you need to get down Wetumpka because we will crown a champion of that event as well as the overall RBOY and RBTOY awards/prizes and have a blast doing it!

By the way, the youth race below is also going to be interesting! 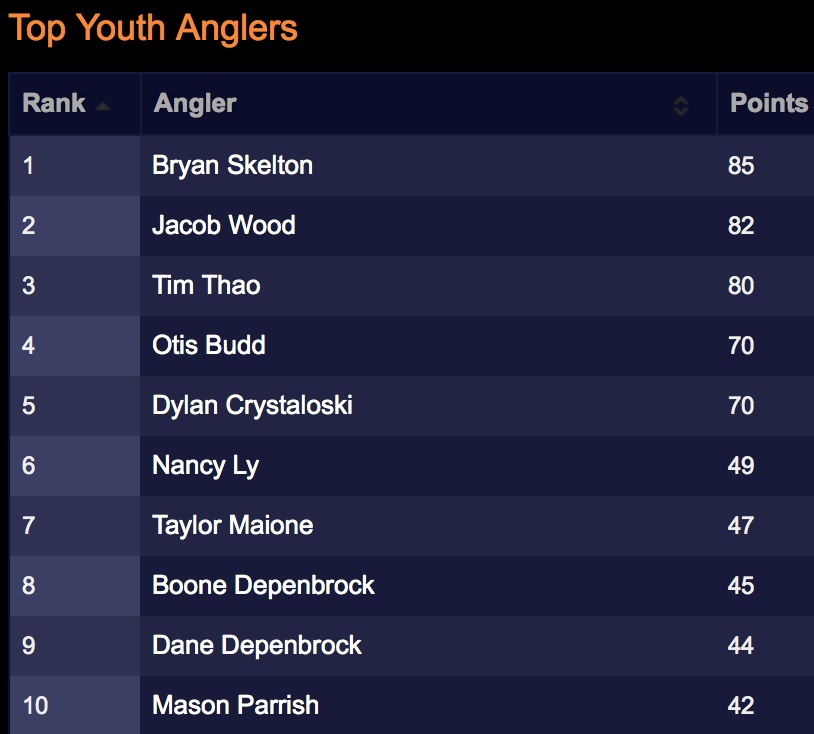