This marks my third year in attendance to the world’s largest kayak fishing tournament in Jacksonville, Florida. This trip will be challenging as I will be bringing the minimum stuff along as I will have two other yak anglers traveling along. Our plans were to head down Thursday late afternoon and do some pre-fishing on Friday before the Captain’s meeting at the Ramallah Club of Jacksonville. The area that we will be pre-fishing will be the Sherman Creek near Mayport Navel Station.

This area offers the opportunity to catch a variety of fish and is a very popular area for all anglers in the search for an inshore slam. Since the Jacksonville Kayak Fishing Classic is a slam tournament you will need to catch a trout, flounder, and redfish that are at least the minimum length requirements for the state of Florida. The tournament also recognizes the largest trout, flounder, and redfish caught. My kayak of choice for this trip will be the Jackson Cuda 14. 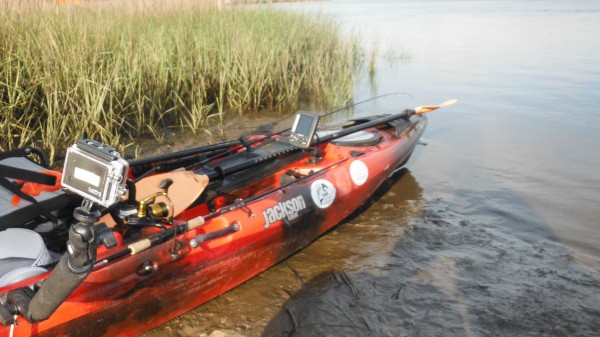 I noted earlier that I planned to minimize the amount of equipment for this trip since there will be three guys and three kayaks for one truck. So the decision for me to go with the Cuda is based on the storage that is available. The center hatch with the insert will be where I will keep my JK Cooler/Fish Bag that will have my ice cold water. My tackle trays will be kept under the Elite Seat for storage and my plastics will be stored in the Elite Seat Pouch. The FishPond landing net will be stored in one of the flush rod holders. A fishing rod in the other flush rod holder, two other fishing rods will be stored in the molded rod stagers with the rod tips protected in the Rod tip cover on bow, and the fourth rod at the ready.

Tide conditions for the slam tournament would start out at a high tide. As the day would progress to the check in time the tide would be coming back in. This scenario will be outstanding for the tournament and best of all for fishing. With these conditions I should be able to launch the Jackson Cuda, have the tide carry me along to the various creek mouths, oyster beds, and flats in the search of trout, flounder and a redfish. I started out by drift behind me a rigged set-up with a mudminnow on a 3/0 circle hook as I casted a 1/8 oz jig head with a chicken off the chain Slayer SST towards the various structures. Drifting past the first creek mouth and oyster rake; the rod with the live bait had had a hard hook up. I quickly retrieved the artificial lure so that I could find out what took the live bait. After a great battle the fish made it to the surface, into the, and on the deck of the Cuda. My first fish of the day was a small crevalle jack. 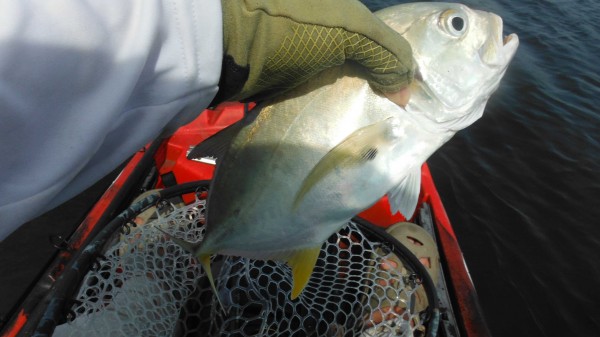 After a photo session with the small jack; I released the hard fighting fish back to his environment. Then I continued with my float plan concentrating on the small creek mouths, oyster beds, and small flats to see if I can find a flounder, trout or a redfish. Re-baiting the rod and casting out to let the mudminnow swim about as I drifted and fan casted the Slayer SST in from of my drift and parallel to the grass line.

When the pre-fishing was done for the day, all I had for my drift plan were two crevalle jacks. Lewis had 4 or 5 jacks and a small trout. Jon had a small trout for his efforts. We loaded the gear up and headed back to the hotel to clean up before heading to the captains meeting at Ramallah Club of Jacksonville. 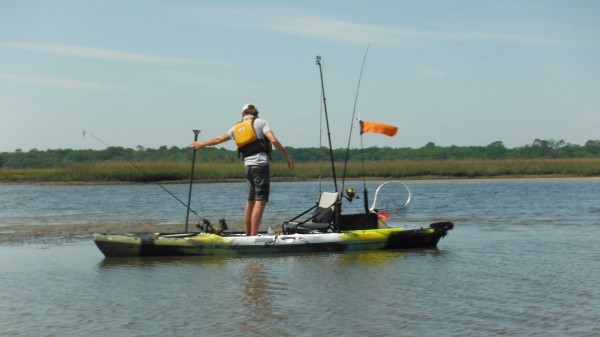 At the captains meeting we checked in and received our captain’s bag and the 321 fish measuring board. Also a new approach to tokens for the catch-photo-release was a rubber bracelet instead of the poker chips of the past. Also at the captains meeting we learned about the great kayaks for the raffles and prizes for the slam winner and biggest fish. The Sponsor for the Slam is Old Town Canoes/Kayaks with a Predator 13 Kayak, Largest Redfish is Jackson Kayak with the Big Rig Kayak, Biggest Trout is Wilderness Systems with a Ride 115X Angler Kayak, and the biggest doormat (flounder) is Malibu Kayak with an X-Caliber Fish & Dive. Besides these four kayaks there were eight other kayaks to be given away in the raffles or playing Rock-Paper-Scissors. Just before the tournament director announced the safe light time to kick off the tournament, I got lucky and won an Old Town Predator MX in the playing deck raffle. Now I have a great problem to solve but I will worry about that issue tomorrow when the tournament is over.
At 5 AM we found ourselves waiting in line to launch from the area that we pre-fished. At 6:15 the first group took their photos just like the rest of us. They launched, the next group followed, and then it was our turn. As I watched the anglers in front of me; it was very evident that a couple of them had the same plan as me. No problem. Maybe I had the secret lures that would produce a wining slot or over slot fish.

As I drifted and waited for my competitors to move from the various stops along the way so that I can try my magic lures. When it was my turn at the first creek mouth I did my casting into the area with top water lure several times but no action. I worked my way along the grass which I knew had a steep cut of about 4 – 5 feet towards a bigger creek across the way. No action on the top water lure. Crossed Sherman Creek into Pablo Creek on the left, and then drifted in front of several oyster beds. At this location I was finally getting some top water action from some trout. Unfortunately I did not manage any hookups but the rod that was soaking a mudminnow had a hit. I managed to land a small flounder about a foot long. At this point I managed to have one-third of my slam in the Jackson Cuda. Made the drift a couple more times but the top water action was no more. So I decided to head along Pablo Creek towards a big flat that is adjacent to the ICW and Chicopit Bay. 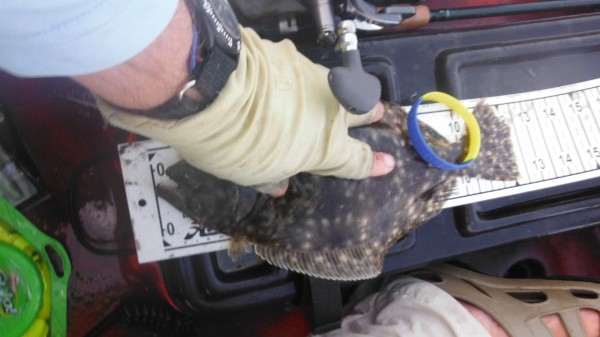 At this time I changed over to a quarter ounce jig head with a chartreuse Gulp swimming mullet. Also I’m still soaking bait as I drift along hoping for a doormat to cancel out the small flounder. I think about my third cast with the Gulp I had a hard strike. Setting the hook the battle was on. Whatever this was it just kept to the bottom. Eventually I had a nice redfish in the Cuda that measured 21.5 inches. Two-thirds of the slam complete. Now all I had to do was to find a 15 inch spotted trout to complete the slam. 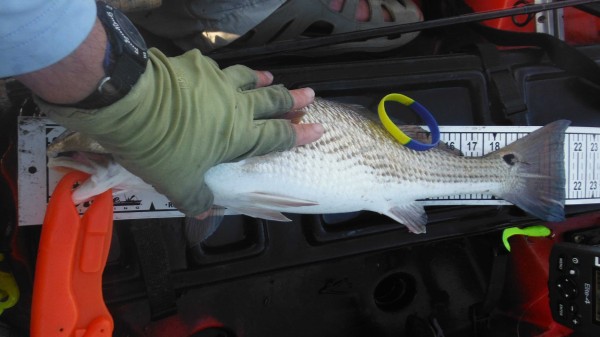 The remaining part of the plan only had 3 or 4 trout holes remaining and then a area for some big redfish. First I had to get a legal trout. Changing over to a 1/8 oz jig head with a chicken off the chain Slayer SST I started working these holes next to the oyster beds. The first trout measured 13 inches. I managed to catch a second but he was too small to even measure. I missed several hits and finally had another hook-up this time the trout was slightly bigger at 14 inches. The bite seemed to end on the trout. I had not gotten any more hits at this stop. I decided to work the trout holes backwards and time was running out. 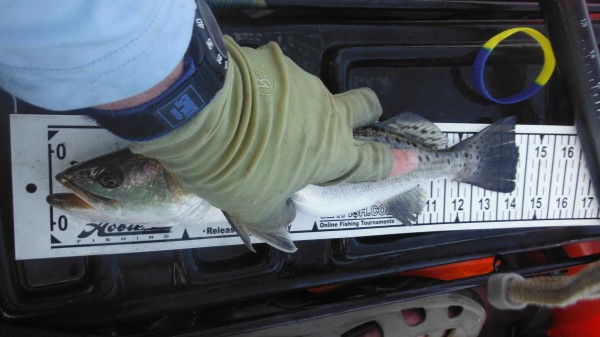 I noticed that my fishing buddies were heading back to the launch which was a strong hint it was time to head in for the weigh-in. I thought to myself that this was not a bad performance for the event. I had a slam but not a legal one but this does mark my second slam in 5 years of inshore kayak fishing.

The weigh-in was great. There seemed to be new winners this year. Congratulations to Drew Mixon for a slam that measured nearly 74 inches, biggest redfish was caught by DJ Cabler, the largest trout measuring 24.75 inches was caught by Alfie Nazario, the biggest flounder was by Brianna Bellinghausen measured 19.5 inches. The best part of the Jacksonville Classis is that nearly 400 yak anglers fished raising nearly $36,000 for the Down Syndrome Association of Jax and Heroes on the Water.